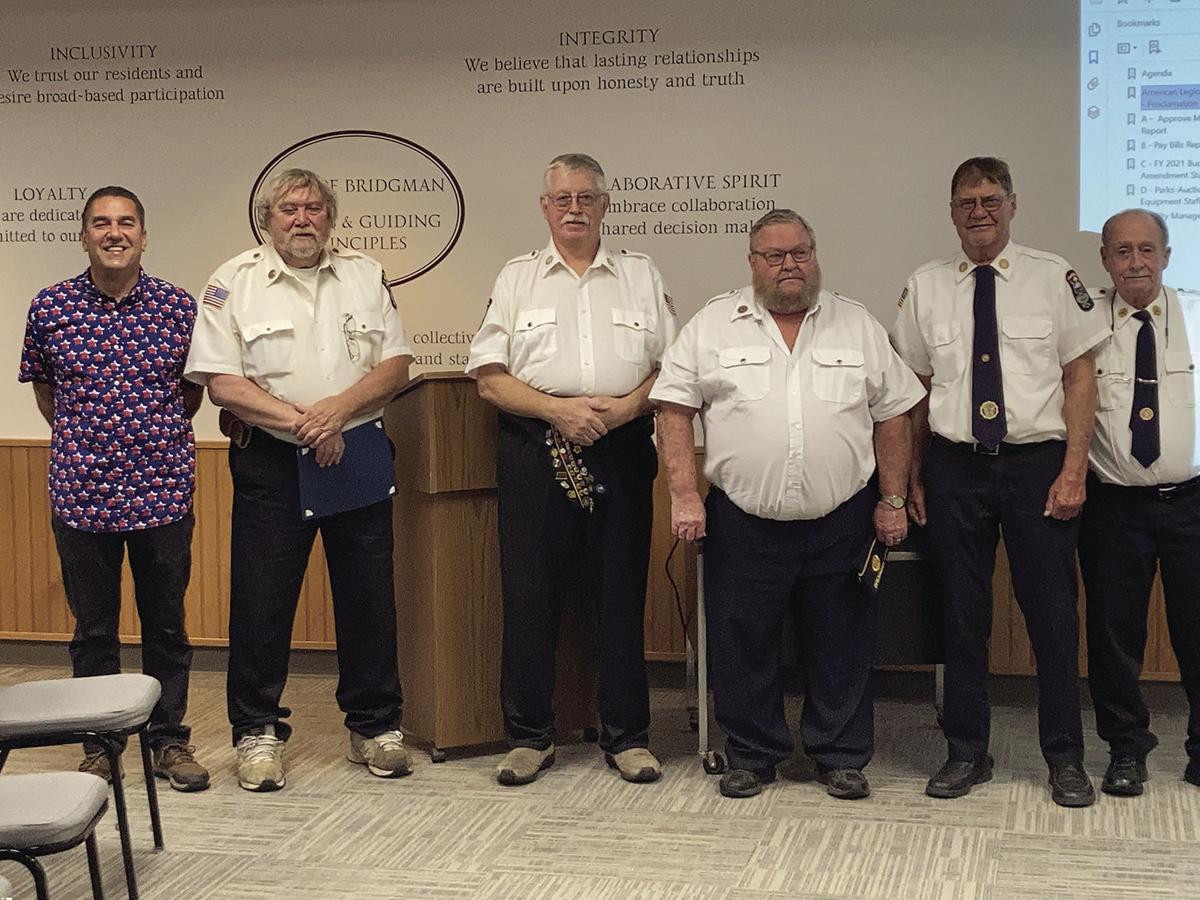 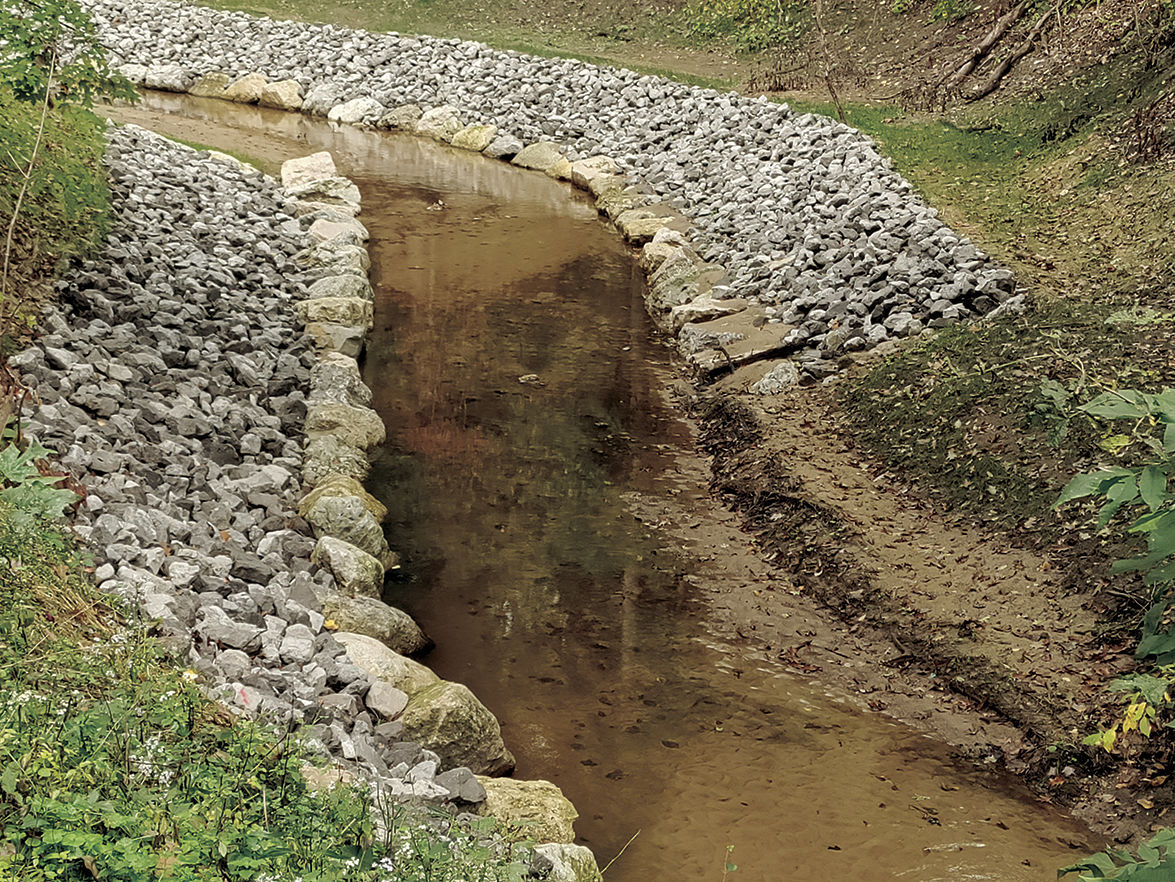 A portion of the county drain in Bridgman near Weko Beach that was recently improved.

A portion of the county drain in Bridgman near Weko Beach that was recently improved.

The 100th Anniversary Celebration Dance is scheduled for 6 to 8 p.m. Oct. 16 at Post 331, 4241 Legion St. The band Pasttime and guest vocalist Billy Shelton of The Spanials will provide live music.

The following Proclamation by Rose was read and approved on Oct. 4:

WHEREAS, The American Legion has been a staunch advocate for veterans and their families since 1919; and

WHEREAS, The American Legion was founded on the four pillars of care for veterans, a strong national defense, Americanism, and children and youth; and

WHEREAS, The American Legion has played a leading role in initiatives and breakthroughs that have affected the lives of Americans in every community, from U.S. Flag Code to the GI Bill; and

WHEREAS, The American Legion Post 331 is celebrating its centennial in 2021; and

WHEREAS, The American Legion Post 331 has fulfilled the Legion’s mission since 1921 through their support of youth programs, readiness to assist in national disasters, and call to honor and remember those who came before is unparalleled. I join the citizens of the City of Bridgman, Michigan, as we all look forward to the Legion’s second century of service; and

WHEREAS, The Bridgman City Council and the citizens of our community celebrate the continued position of American Legion Post 331 as an inextinguishable beacon of community, responsibility, honor, and service; and

IN WITNESS WHEREOF, I have hereunto set my hand and caused to be affixed the official seal of the City of Bridgman, Michigan on this 4th day of October 2021.

City Manager Juan Ganum said the City Council on Aug. 2 received a presentation on preliminary design concepts for downtown property north of City Hall, south of Lake Street, west of the train tracks and east of Maple Street from Ryan Kilpatrick and Marques King of Housing Next.

All had a variation of residential component, in the back (toward City Hall), a cornerstone three-story building along lake street near the railroad tracks, a two-story building next to the former Eric’s Bridgman Cafe, various variations on a courtyard and utilizing the existing alley as an event space, and allowing a developer to build residential/mixed use.

During the Aug. 2 meeting, Kilpatrick and King presented the council with four conceptual drawings of potential development plans for the property north of City Hall that is currently public parking. They suggested to Council when the City is deciding on how best to develop this property to keep in mind establishing edges to the area by placement of pedestrian areas as well as development of the Lake Street frontage. Kilpatrick reminded Council that this won’t happen quickly but is a long-range plan for the area, but this can be a catalyst for future planning and discussions.

Kilpatrick also talked about the possible long-term project during the Oct. 4 meeting.

Ganum said if officials decide to move forward with developing the area, the city would likely either be seeking a developer that is willing to build what they’re looking for, or a developer to present ideas to them and work with the city.

“The next step will more than likely be some sort of a workshop meeting to decide the future of the property,” Ganum said.

It was noted that Building Official Brad Mattner has been sending out notices to the property owners when found in violation of the city’s ordinances. He recently got together with Attorney Sarah Senica and Ganum to work on language to make the definition of a short-term rental more user-friendly.

Senica explained that the current language under the definition of single family clearly states you may not reside in a residential dwelling for less than six months. Mattner recently received an inquiry that pointed out that the city technically does not allow short-term rentals anywhere within the city. In the past, the city has allowed some short-term rentals in a commercial district, and she asked planners if they are comfortable with making a provision to the current ordinance to allow short-term rentals in the commercial district, subject to certain regulations.

Also, it was noted that the definition of hotel in the current Zoning Ordinance needs to be changed to read “with or without a cooking facility” to allow the current commercial buildings such as the Monogram Hotel and Sunset Landings apartments to come back into compliance.

Mattner said there was an R4 district in the previous Zoning Ordinance from 2006 that allowed lodging houses and tourist homes. When the ordinance was updated, some of the wording was changed which now reads cooking facilities are not allowed.

During the Sept. 7 City Council meeting, Berrien County Drain Commissioner Christopher Quattrin talked about the drain system in the City of Bridgman.

He explained that a once-in-500-years flood happened on Aug. 10, with 7 inches of rain falling in less than four hours.

After coming to Bridgman City Hall that day and meeting with city officials, Quattrin said Oselka Construction was able to mobilize quickly and had two groups working on areas along Tanner Creek and the Bedortha Drain to remove obstructions. Within 24 hours the water had receded.

Quattrin on Sept. 7 went through a series of maps which showed the County Drains within the city highlighting post-storm flooding and obstructions, mitigation work that has been completed, remaining mitigation work that would improve drainage, and possible large scale future improvements.

Also on Sept. 7, Erin Hudson, Executive Director of Harbor Habitat for Humanity, provided an update on a home construction project planned in the city.

She said the pandemic has slowed the project down as donations are down, there are a limited number of volunteers available, and material costs have gone up significantly which would take the project out of the realm for affordable housing.

They are currently working on the closing of the property, getting a conditional rezoning application submitted, and then splitting the property accordingly. There is a possibility that they will build six single family houses instead of three single family and two duplexes. Phase 1 includes building along Vineyard Street. Phase 2 includes extending Willow Street 500 feet and building remaining houses along Willow Street. Extending Willow to Baldwin Road would be ideal, but it would cost over $1 million, so grants and other means to fund the road extension are being explored.

In other Bridgman related matters:

During the Sept. 16 Planning Commission meeting, Ganum gave an update that included the following: Rochefort’s business will be moving into the previous Eric’s Café building; Casey’s General Store was scheduled to break ground in the near future; and the Transient Artisan Ales owner did purchase the Chase Bank building.

Ganum said the “Taco Tuesday” Taqueria Don Chepe food truck (downtown at the outside courtyard from 4 to 7 p.m.) has been a success.

Upcoming events include: The Bridgman Public Schools will hold a Trunk or Treat fest from 6 to 7 p.m. Wednesday, Oct. 27, at Reed Middle School; Bridgman’s annual Holiday Village, which has been scheduled for Saturday, Dec. 11, 2021.