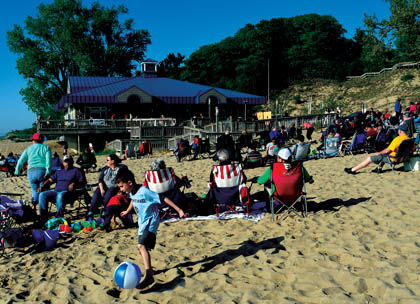 The first installment of the 2019 Bridgman Concert Series at Weko Beach featuring the band Past Time was held on Sunday evening, May 26, 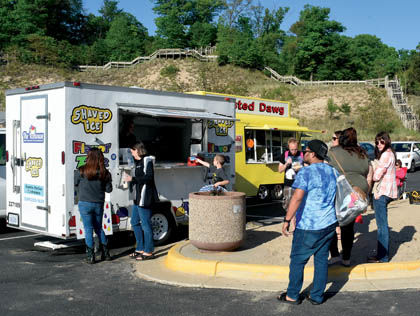 Food trucks at Weko Beach in Bridgman on Sunday, May 26.

Water skiing off Weko Beach on May 26.

The first installment of the 2019 Bridgman Concert Series at Weko Beach featuring the band Past Time was held on Sunday evening, May 26,

Food trucks at Weko Beach in Bridgman on Sunday, May 26.

Water skiing off Weko Beach on May 26.

BRIDGMAN — Bridgman City Manager Juan Ganum has a new headache to go with the new raise he received on Monday, May 20.

On Thursday, May23, he received the resignation of his Parks and Recreation Manager Joan Guilfoyle who said she felt forced to resign on the eve of the Memorial Day Weekend due to “months of frustration with the work environment and the lack of openness to change.”

Ganum received a $4,500 raise, a $2,500 contribution to his pension and five additional days of vacation following a May 20 closed session of the City Council. His review was postponed from January so the four new council members elected in November had more time to evaluate his performance.

“We are very fortunate to have Juan as our city manager and I personally look forward to working with him to make Bridgman an even better community to raise a family, to own or start a business or to promote our city as a perfect vacation destination,” said Mayor Vince Rose, citing Ganum’s forward thinking and openness to new ideas and suggestions.

Ganum is in the second year of a five-year contract, which began in January 2017, and was making $82,000. He was hired by the city in 2015 from five finalists, filling the spot left when the late Aaron Anthony retired after 18 years at the post. Originally hired with a two-year contract, Ganum was given a of vote of confidence and a four-year contract in January of 2017.

Prior to joining Bridgman, Ganum was community development director for the City of Niles and before that was associate director of program director for the Southwest Michigan Planning Commission. He was recently elected to the statewide Michigan Municipal Executives board of directors.  He holds a master's degree in public administration from Western Michigan University and bachelor's degree in urban and regional planning from Michigan State University. He and his wife Jody have two sons.

Following the council’s vote for Ganum’s additional compensation, the council heard complaints from two Weko Beach employees about conditions at the Beach House during their past two summers working there, including the lack of adequate air conditioning. This was followed on Thursday by the Guilfoyle’s resignation, effective at noon on Friday, May 24. A retiree from the National Parks Service, Guilfoyle was hired by the city in December after serving as a consultant for two months last summer.

Earlier in the meeting, the council discussed several issues regarding improvements to the Weko Beach House in preparation for the coming season including approval of a contract with McGuire’s Professional Construction for $9,700 for painting the upper level.

The council then discussed expanding the capacity of the Beach House air conditioning system for an additional cost of up to $8,300 but voted to continue with the installation as originally proposed for $55,000, of which $36,000 was donated by former Council Member Jim Catania. Council Member Stacy Stine pointed out that the air conditioning specifications will be included in the rental agreement.

Council Member Jan Trapani questioned what she figured was the “whopping number” of about $30,000 spent on the Beach House, saying she wants to be sure it is an investment that will be recouped. Council Member Rick Fuller asked that a business plan for the year-round rental of the Beach House, showing projected revenues and expenses, be included in the upcoming budgeting process.

Both Ganum and Guilfoyle said these expenses are expected to make the Beach House a very popular event venue and generate revenues in the future. Guilfoyle also said the city needs a written policy on which local government and community groups are allowed free use of the facility.

At the beginning of the meeting, Eugene Herrman, Bridgman American Legion Post 331 chaplain speaking on behalf of Post Commander David Mutz, presented the city with an American flag that flew over the post to recognize the city’s sense of patriotism and support of the Legion, particularly saving the American Legion a $1,000 insurance fee related to the its annual Memorial Day Parade.

By the city becoming a co-sponsor of the parade, the parade can be covered under the city’s policy for a $300 fee, which the city absorbed.

“If anyone thinks patriotism is dying, send them to Bridgman,” Herrman said, adding that city’s support will enable the Legion to continue its efforts, such as scholarships to local students and its longstanding Memorial Day parade.

The parade on Sunday, May 26, will begin at 1 p.m. at the Legion Hall, 4241 Legion St., proceeding to Maplewood to Lake Street to Church Street and continuing to Greenwood Cemetery. An open house with sandwiches and refreshments will be held at the Legion Hall following the ceremony.

Michigan State Police Lieutenant Melinda Logan received unanimous support from the council for the construction of a memorial to Trooper Allan P. Peterson who died in 1981 due to inhalation of toxic gases while assigned to the Bridgman scene of a derailed freight train. Peterson, 37, a Three Oaks resident, died one month after the accident, leaving behind his wife and two daughters.

The memorial bench, plaque and tree, all paid through contributions, will be located on Lake Street west of the tracks, looking into the city.  Dedication ceremonies will be conducted on Thursday, Aug. 29, the anniversary of his death.

The council voted to hold a public hearing on the 2019-10 budget at 6:30 p.m. Monday, June 3, before the regular council meeting. A special workshop meeting is planned for Monday, June 10, to focus solely and the water and sewer budget followed by adoption of the budget on Monday, June 17.

In other action, the council:

-- approved a $59,000 contract with R. Yoder Construction for the reconstruction of the concrete approaches to the north and south sides of the Fire Department;

-- adopted a resolution to support a micro brewer’s license for the Tabor Hill Tasting Room to allow serving Round Barn beers at 10243 Red Arrow Hwy.