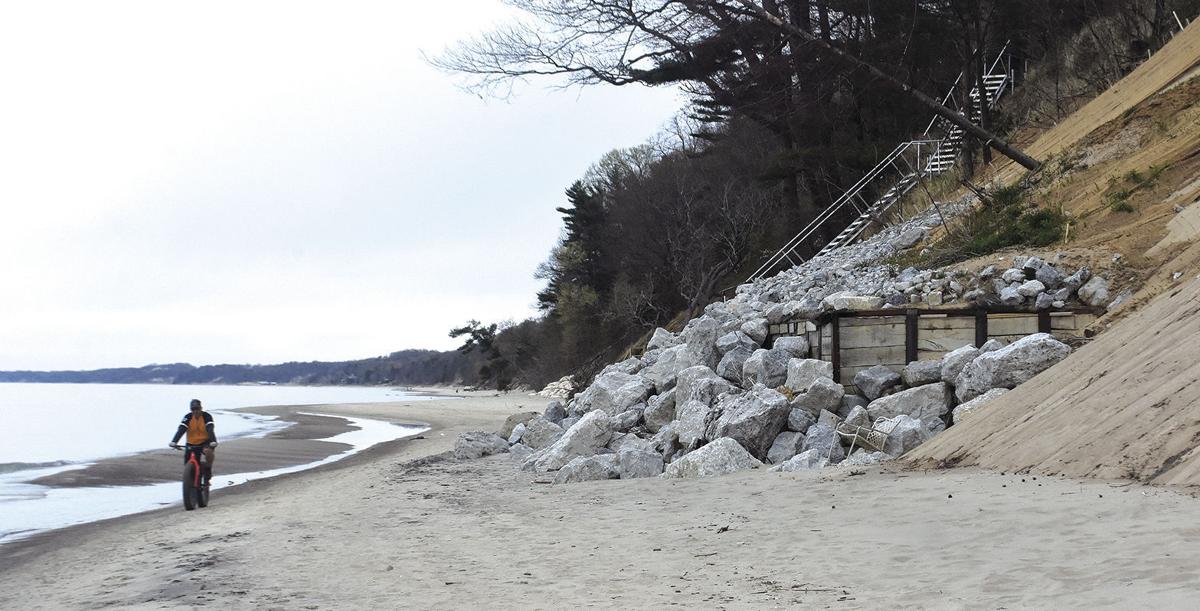 A view of the Chikaming Township shoreline near Harbert on April 18. 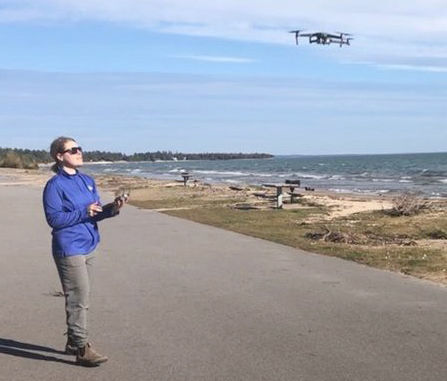 Michigan Sea Grant’s Extension educator Martha Gerig lands a drone along the Manistique coastline. Gerig serves as a citizen scientist for the Manistique area and began collecting images via drone last autumn. Drone images are also being captured along shorelines in South Haven and Chikaming Township.

A view of the Chikaming Township shoreline near Harbert on April 18.

Michigan Sea Grant’s Extension educator Martha Gerig lands a drone along the Manistique coastline. Gerig serves as a citizen scientist for the Manistique area and began collecting images via drone last autumn. Drone images are also being captured along shorelines in South Haven and Chikaming Township.

Nearly 400 communities in Michigan are located in coastal areas. Two of those areas in Southwest Michigan – Chikaming Township and South Haven – are part of a two-year Michigan State University study that will detail how erosion and changing weather patterns are changing Michigan’s shoreline communities.

The monitoring program, developed by MSU’s Department of Geography, Environment, and Spatial Sciences and Remote Sensing and GIS Research and Outreach Services, and funded by the National Science Foundation (NSF), seeks to survey shoreline residents in six different Michigan coastal communities and train volunteers to collect detailed drone imagery of critical coastline segments in each of those communities.

It is hoped that results from the data will give community leaders and residents more of an incentive to develop more resilient ways to deal with changes in Great Lakes weather patterns and water levels.

Dr. Erin Bunting, assistant professor of Geography, Environment, and Spatial Sciences at MSU, is in charge of the study.

“NSF funded the project, at our request, for two years in order to develop a time series of imagery along the coast,” she explained. “We want to document, over as long of a time frame as possible, the changes that have occurred. With such a time series we can model the system better and work with communities to provide such data and give management suggestions.”

In addition to South Haven and Chikaming Township, four other state shoreline communities are part of the monitoring program: Manistee, Marquette, Manistique and the Tawas area of Iosco County.

The monitoring program in Chikaming Township was slated to begin last week, while South Haven’s began in March.

One is a survey that local residents will be asked to complete. Researchers think the responses will give them a better idea of the erosion and flooding concerns people have been dealing with over the past several years, when many of the water levels on the Great Lakes exceeded previous records.

“Any community member, especially those living right on the coast, can fill out the survey,” said Bunting, but she stressed respondents who do so should be residents of those communities, not visitors.

To take the survey, visit: msu.co1.qualtrics.com/jfe/form/SV_dj7gUkiiQSqjrq6.

“The pilot will be asked to complete a paid-for training course and take an exam,” Bunting said. “Once licensed, we will ask that they fly the drone at least every two months in the spots we have identified. Additionally, if there are major storm events coming we will contact them to fly before and after. The ideal pilot would have approximately one day a month they could help us.”

Those interested in becoming volunteer drone operators for the project can email Bunting at: ebunting@msu.edu

Researchers will also gather data from ground-based image collections along the coasts.

“Anyone walking the beach can see a coastal hazard or something of interest, take a picture, and upload it to our website,” Bunting said.

Bunting and other researchers think results of the study will help coastal communities develop plans to better protect their shorelines.

Nearly half of Michigan’s population lives in coastal areas and coastal employment amounts to $91.6 billion in annual wages, according to the National Oceanic and Atmospheric Administration.

However, according to Michigan Sea Grant, which was formed to help foster economic growth and protect Michigan’s coastal, Great Lakes resources through education, research and outreach, the coasts have been changing over the past several years causing the “Great Lakes State” to experience significant erosion along its nearly 3,288 linear miles of coastlines, stemming from unpredictable water levels and increased frequency and severity of storms.

“With approximately 387 coastal communities, this erosion is an important topic for state regulatory authorities, municipalities and homeowners alike,” it was stated in an article written by Michigan Sea Grant staff and published by MSU Extension.