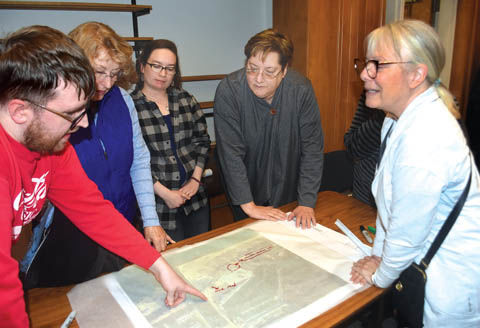 Working with a map of current conditions at New Buffalo’s waterfront during the Dec. 5 “Design Charette.” 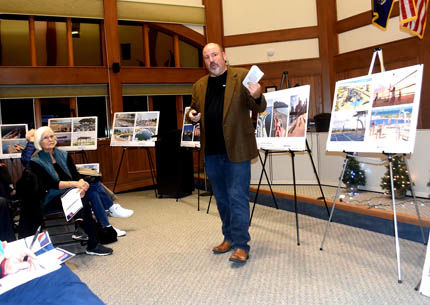 Working with a map of current conditions at New Buffalo’s waterfront during the Dec. 5 “Design Charette.”

NEW BUFFALO — Citizens of New Buffalo got to put their two cents in (and then some) during a Dec. 5 Waterfront Master Plan Design Charette session held in City Hall (a charette is defined as a meeting in which all stakeholders in a project attempt to resolve conflicts and map solutions).

Mike Huber of Abonmarche said the City of New Buffalo received a $50,000 grant from USDA Rural Development to fund the Waterfront Master Plan study that the Dec. 5 gathering was a part of.

He said city officials have expressed just how much of a priority improving the waterfront area is — “making it function better, keeping safety in mind.”

Huber said the ultimate goal is “creating an overall community vision for the city’s waterfront.”

He said a major emphasis of the process is to engage the public through both a community survey and to hold two design charette sessions (the Dec. 5 event was the first).

“The focus of our plan is to really look at the city beach, the boat launch, the Lions Pavilion Park, the riverfront park and the dune walk … and look at them for programming, access management … identify and prioritize future project investments … how we can best enhance the connections between the waterfront and the downtown,” Huber said.

Huber also went over the results of the recently completed online survey on the public beach and other waterfront amenities in New Buffalo to gather feedback on “the likes, dislikes, understand what the critical issues are, what do people want when they go to the beach, what do they expect? … How is it used? What’s missing here?”

He said 654 people responded in the 45-day window that the survey was available. The overwhelming majority were full- or part-time residents (almost 10 percent were non-residents) with more than half over 50 years old (although nearly 100 local high school students participated). Huber said the people in households represented by survey takers also appears to help make it more representative of all age groups.

Among the survey results reported by Huber were:

• While the New Buffalo Beach was listed highest as a site used often, others rating highly included Warren Dunes State Park, Silver Beach in St; Joseph, various private beaches, Michigan City and Weko in Bridgman (in another survey response the maximum distance people said they would normally travel to use a beach was 25 miles).

• Almost half of respondents (48 percent) indicated that New Buffalo was not their most preferred beach (41 percent said yes). Reasons given by the 48 percent for not ranking New Buffalo tops included parking, access, limited space, cost of parking, poor quality of sand, older amenities. On the positive side survey takers listed proximity and the presence of lifeguards.

• Huber said the top positive attributes respondents attributed to any beach they visit included quality of sand, nearby bathrooms, convenient parking, proximity to where they live, concessions, benches and viewing.

• As for which parts of New Buffalo’s waterfront amenities are used the most, Huber said the beach is number one by far, followed by the dune walk, playgrounds, concessions. Also, 71 percent of respondents said they use downtown restaurants and shops when they visit the waterfront.

• An open-ended question asking what people’s most and least favorite things about the New Buffalo beach yielded positives regarding sunsets, great place to take family photos, proximity, swimming and playing in water, the New Buffalo Beach Club and the Dune Walk, and negatives related to crowds, costs, parking, trash and debris, access, availability of parking, distance from lot to beach, pedestrian access from downtown, water levels and erosion.

• A question on amenities that could be added in the future yielded support for ideas like an amphitheater that could be sudden for concerts, an indoor pavilion for reunions and weddings, water and/or boating safety classes, ecological protection classes, ticketed boat cruises, charter fishing, and boat rentals.

• Other ideas included a shoppers dock, general beautification, a new lighthouse, a splash pad, a walkable pier, a slide into the lake, yoga or zumba on the beach.

“The city has already done some improvements in the past year (including new playground equipment, an ADA-accessible beach walk, storage at the boat launch and concession operations), so when we did the survey we asked questions about how well they were received,” Huber said.

The design portion of the gathering that followed gave those attending the opportunity to participate in three mapping exercises involving: 1. Map of Existing Conditions; 2. Project Component and Image Boards (the council chamber was ringed with boards showing examples of waterfront amenities for people to rank); and 3. Design the Beach (incorporating aspects from the first two exercises).

“The whole goal of tonight is top get your input and get your feedback, your thoughts in terms of … creating and determining a vision for the City’s waterfront area, not just the beach but the entire waterfront park area,” Huber said.

The next design session is scheduled for 6:30 to 8 p.m. Jan. 8 in the New Buffalo High School cafeteria.