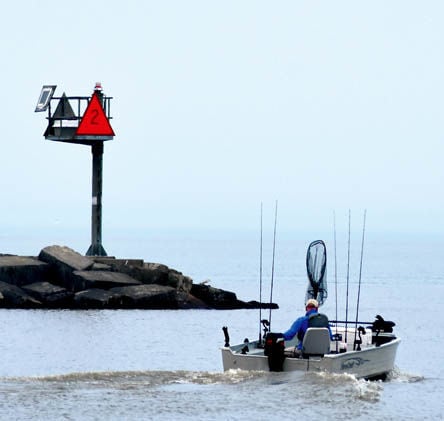 A fishing boat heads out onto Lake Michigan in New Buffalo on Tuesday, April 28. 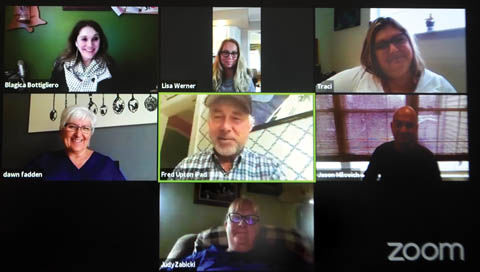 A fishing boat heads out onto Lake Michigan in New Buffalo on Tuesday, April 28.

NEW BUFFALO — Sixth District U.S. Congressman Fred Upton said he was happy that some of the Executive Order restrictions related to slowing the spread of coronavirus such as those related to motorboats, landscaping/plant nurseries and bicycle repair shops had been relaxed by Michigan Gov. Gretchen Whitmer during an April 24 Community Facebook Live Chat with members of the New Buffalo Business Association Board.

Upton said he had asked Whitmer to relax the power boat portion of the order on the evening of April 23, and he received a text from her the next morning confirming that would be part of the changes being announced later that day in a new Executive Order effective through May 15.

“Now if we can just deal with the high-water issue,” he quipped.

Upton expressed his support for the new state requirement that customers and employees wear face masks in enclosed places of business.

“I think the steps she did take today were good and right on,” he said.

“If you have the right social distancing working outside it would seem that would be a viable thing,” he said, adding that Realtors normally take just one or two people through a house for a showing.

NBBA Board member (and Realtor) Traci Lauricella later noted that real estate is considered an essential service in Indiana, so there are few restrictions there.

“How do you sell a house that you can’t show, or get a photographer in?” Upton asked.

Lauricella said closings on sold properties in Michigan are currently being done virtually.

“It would seem to me that that … the real estate side of things would be an east next step, hopefully within the next week or so,” Upton said, adding that he would ask Gov Whitmer to consider putting that on “the front burner.”

Gov. Whitmer said during a Monday, April 27, press conference that she plans to allow commercial and residential construction to restart in Michigan within a week or two (the restart date was later set for May 7), and is considering letting industrial sectors re-open in the next phase of loosening her stay-at-home restrictions.

Upton noted on April 24 that his office and the staff of the governor are in touch every day. He said John Menard Jr. of Wisconsin-based Menard’s (the chain’s founder and owner) recently called Upton saying he wanted to personally donate masks to Michigan and was looking to get in contact with Gov. Whitmer.

“I texted her and said ‘Who do you want me to have him talk to?’ and she said ‘Me. Give him my number.’”

Jason Milovich of Blue Fish Vacation Rentals (a member of the NBBA Board) said he hopes rentals of individual homes will be treated the same as hotels when the economy starts opening up again.

“A lot of us feel the homes are easier to social distance than a hotel,” he said.

Upton noted that he’s a part of the federal government, and he urged people in Southwest Michigan who have specific recommendations or questions pertaining to state policies to contact State Representatives (depending on where you live) Brad Paquette (517) 373-1796, or Pauline Wendzell (517) 373-1403, or State Sen. Kim Lasata at (517) 373-6960.

NBBA Board member Lisa Werner said she has a spa and a small inn with seven rooms and no common areas, and said her goal is just to survive until the lockdown lifts.

Board member Dawn Fadden said staying away from clients and working safely in the outdoors are goals for her business (Pristine Pools & Spas), adding that getting permits from local units of government has been challenging.

Upton said Paycheck Protection Program (PPP) money from latest federal stimulus package that passed with broad bipartisan support on April 23 will mainly be distributed by community bankers and credit unions that service most of the loans in Southwest Michigan.

NBBA Board President Blagica Bottigliero noted that Upton was literally in D.C. yesterday (April 23) voting on the package, and she asked how business people can access federal loans.

Upton said the new loan money goes into an existing program administered through the Small Business Administration, adding that the SBA doesn’t have the resources to manage this plan across the country.

He said if the money goes toward payroll or other necessary uses then the loan then becomes a grant — “and those small businesses are able to survive.”

Upton said small businesses that have been denied loans or haven’t applied yet should go to a local lender (especially one they have a relationship with) right away because he believes the money will run out again.

It was noted that Economic Injury Disaster Loans (EIDL) for small businesses also were part of the package ($60 billion) passed on April 23 and are also being administered through the SBA.

Upton was skeptical that the heat of summer would kill off COVID-19.

Upton said he hopes a Michigan tourism campaign like the discontinued Pure Michigan will start up again. He also noted that Amtrak ridership was recently reported to be down 90 percent and the state of Michigan is running a large and growing deficit due to the current crisis.

He said the steps groups like the NBBA are promoting in regards to the tourism industry, restaurants and other businesses will be important     going forward.

“That’s how we get our communities working again,” Upton said. People coming to travel, spending money in our communities, paying the sales taxes, the things that pay for our schools and so many other things. We’ve got to get this wheel started again.”

Upton said there is a proposal to reserve some of the bandwidth from an upcoming federal sale for rural areas, and he is hopeful that a bipartisan effort to make that happen involving himself, South Carolina Democrat Jim Clyburn and other representatives from both political parties will yield positive results.

He said voting on the latest coronavirus aid package April 23 was a lengthy process (taking two hours for what would normally be a 15 to 20 minute vote), with about 15 members at a time allowed in the house chamber in alphabetical order (and Upton is near the end).

Near the end of the chat NBBA members wished Upton a happy birthday (the big day was April 23).

Batton said the local group was started on March 14 after she heard about a mutual aid effort under way in Kalamazoo from her sister-in-law.

She said while SWMI Mutual Aid has helped people get groceries and obtain face masks, it’s also been more of a resource for knowledge that she expected.

“People want guidance and people have lots of questions and people want reassurance from another person,” she said. “So we’ve been doing lots and lots of that kind of stuff, especially with unemployment. That’s the number-one thing people seem concerned about.”

To access the group’s Master Helper List of volunteers who have offered to help in numerous areas of need, go to: https://docs.google.com/spreadsheets/d/1dp19TD3JyQkB-BPL0yQW936P88OwQcPP2UtoyJj-a5s/htmlview

or send an email to: swmimutualaid@gmail.com.