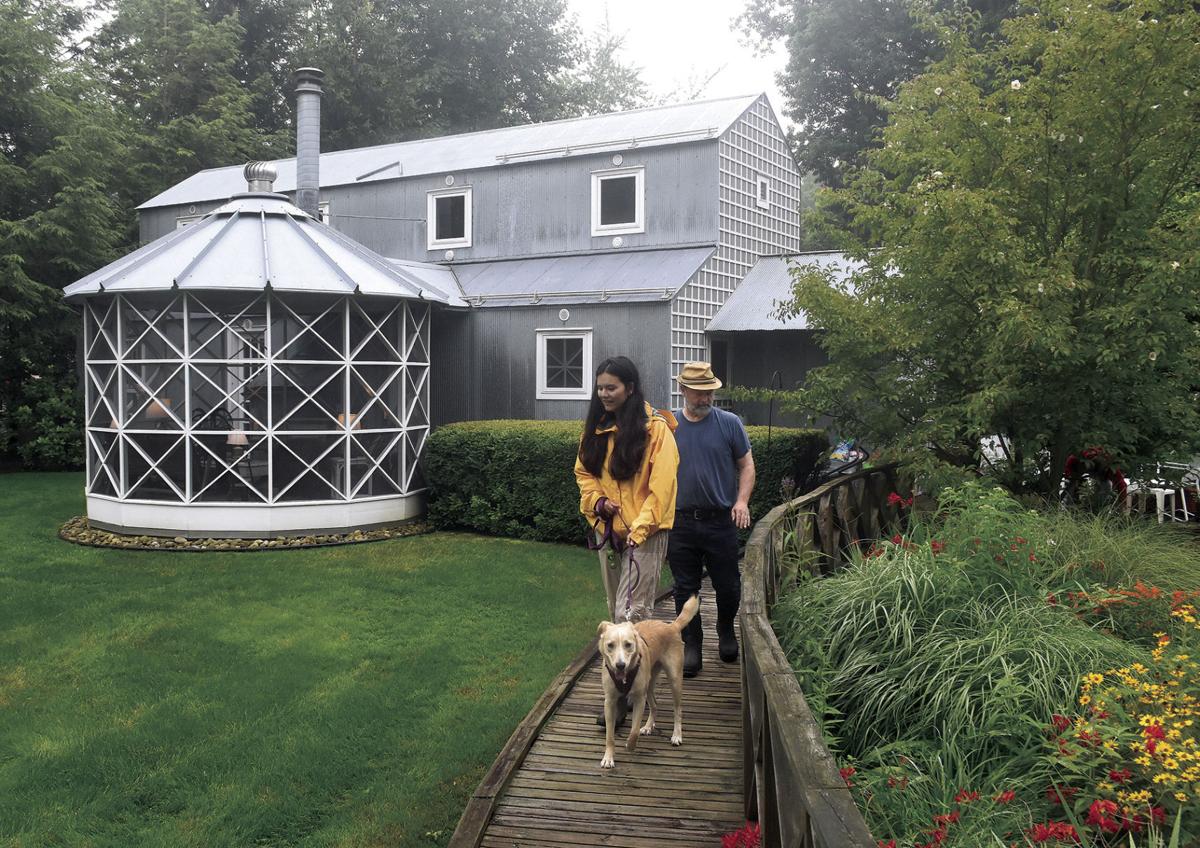 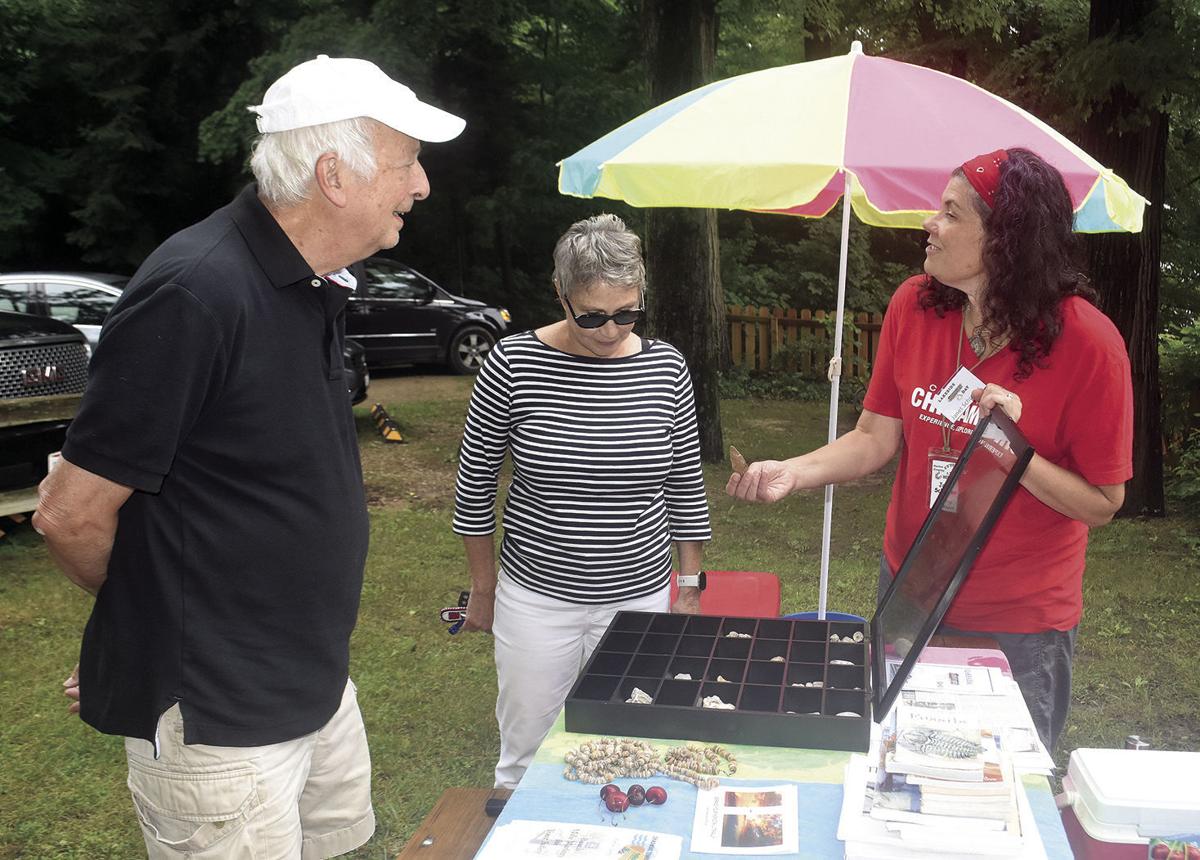 Janet Schrader (from right) shows an arrowhead she found on a local beach to Ellen LaFountain and David Derbyshire during the July 17 Lakeside Association History Day. 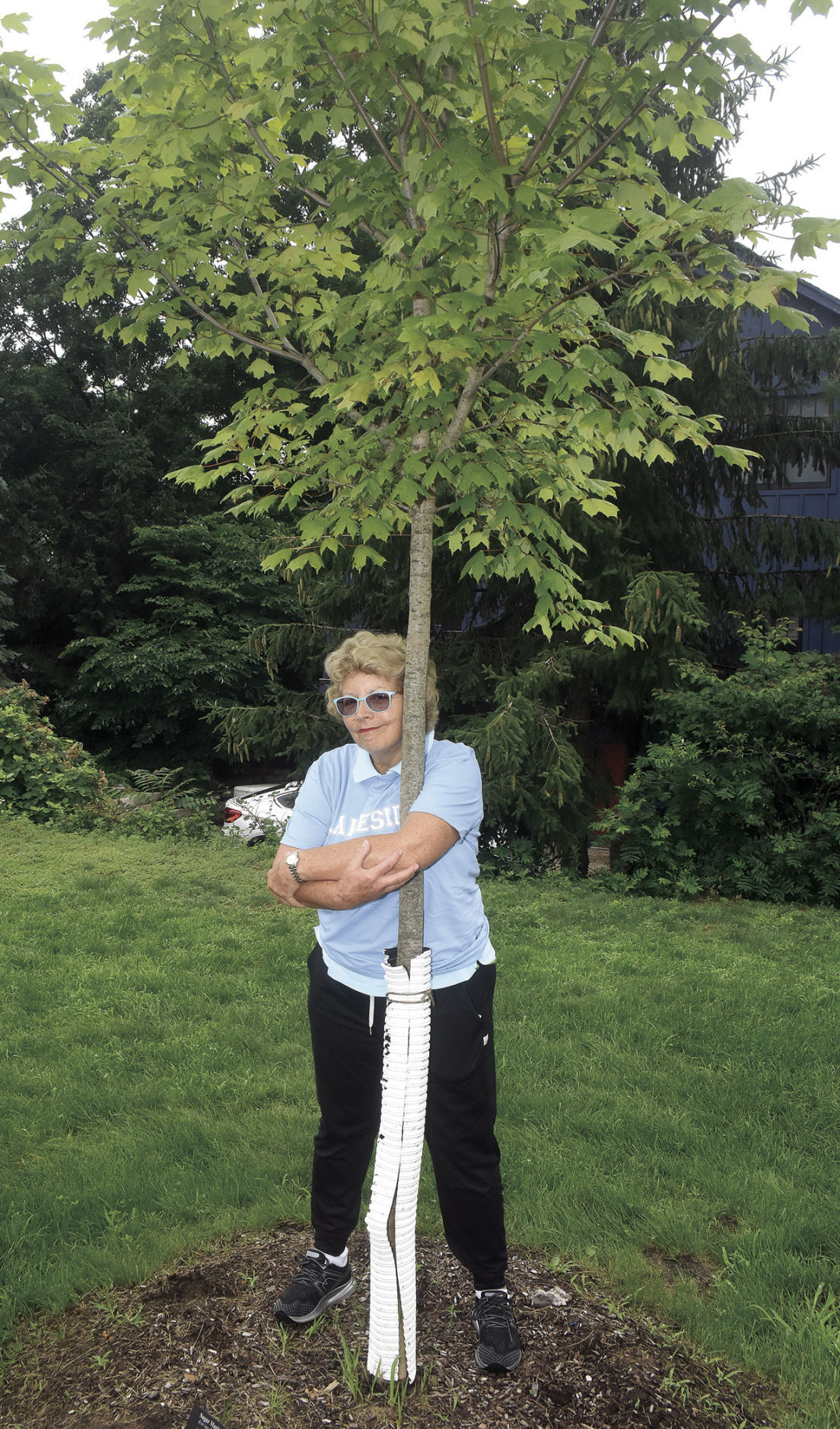 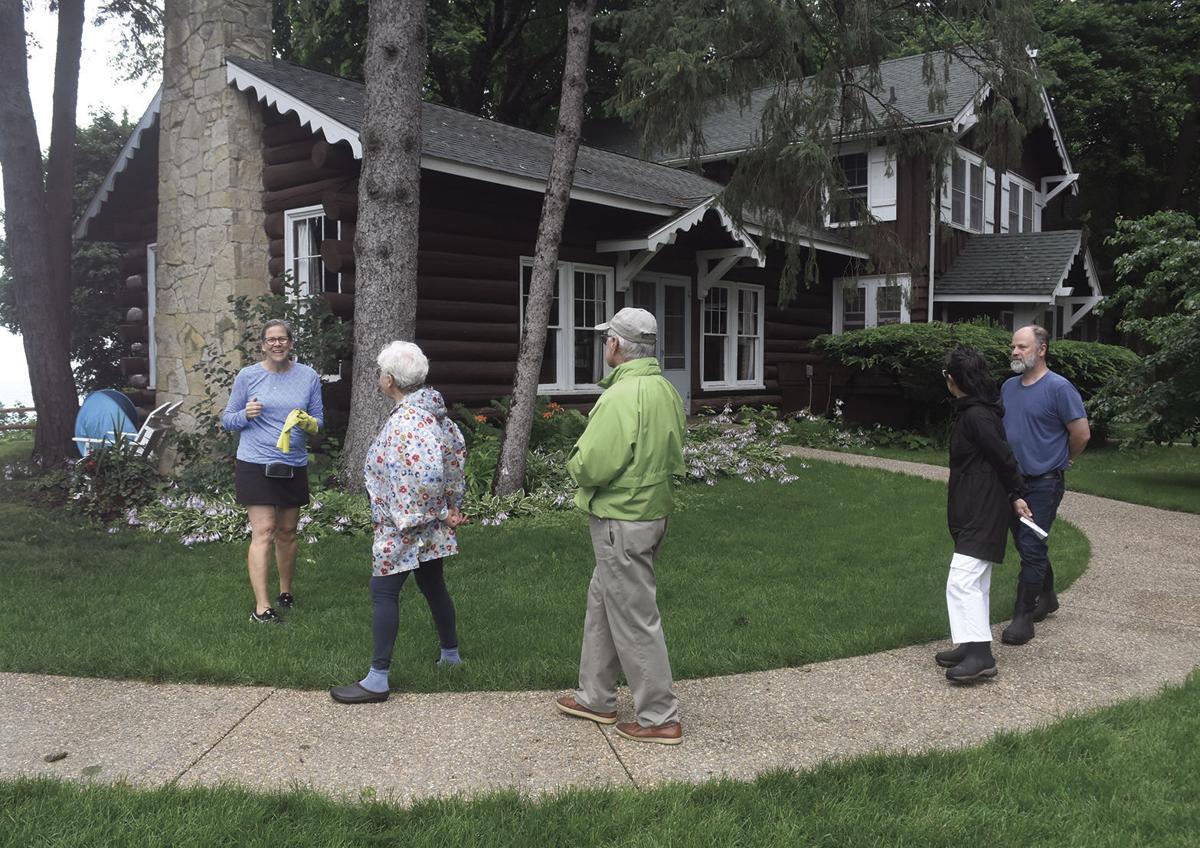 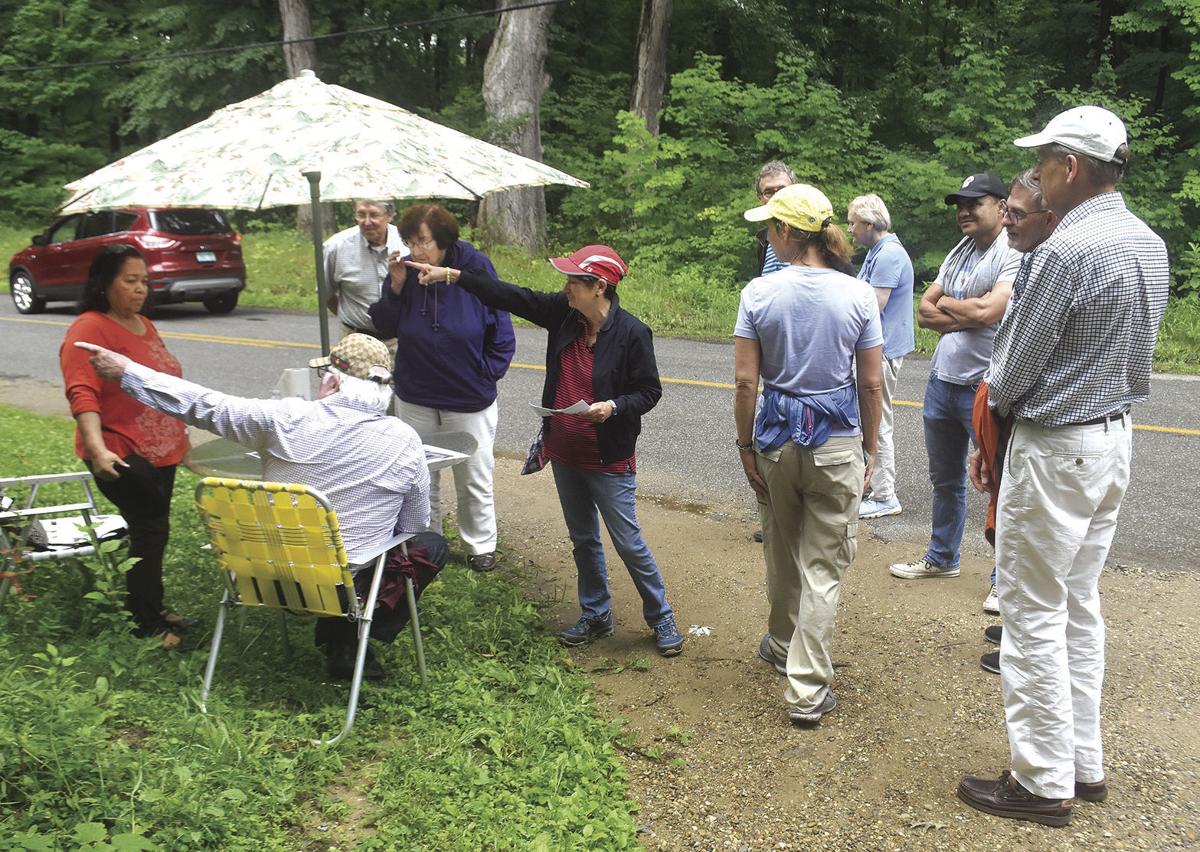 Bill Stevens (seated at left) points towards the home where John Paul Stevens once resided during the July 17 Lakeside Association History Day. 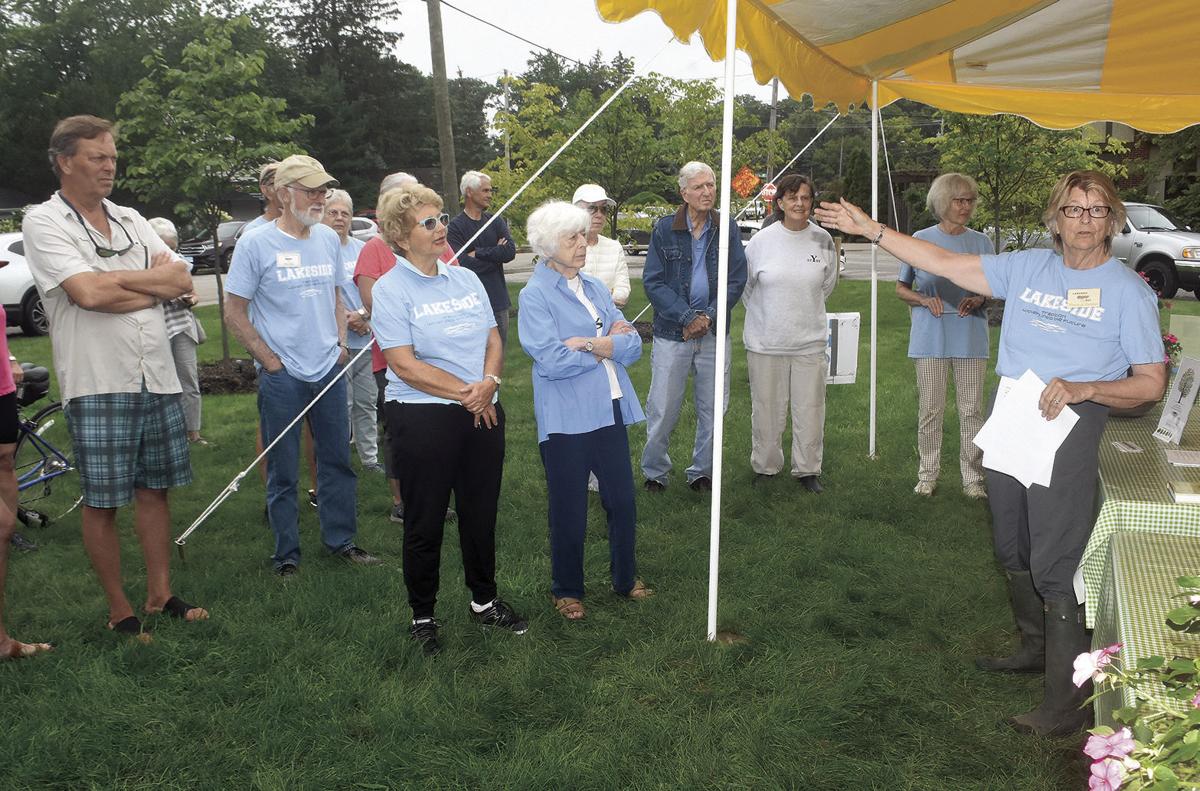 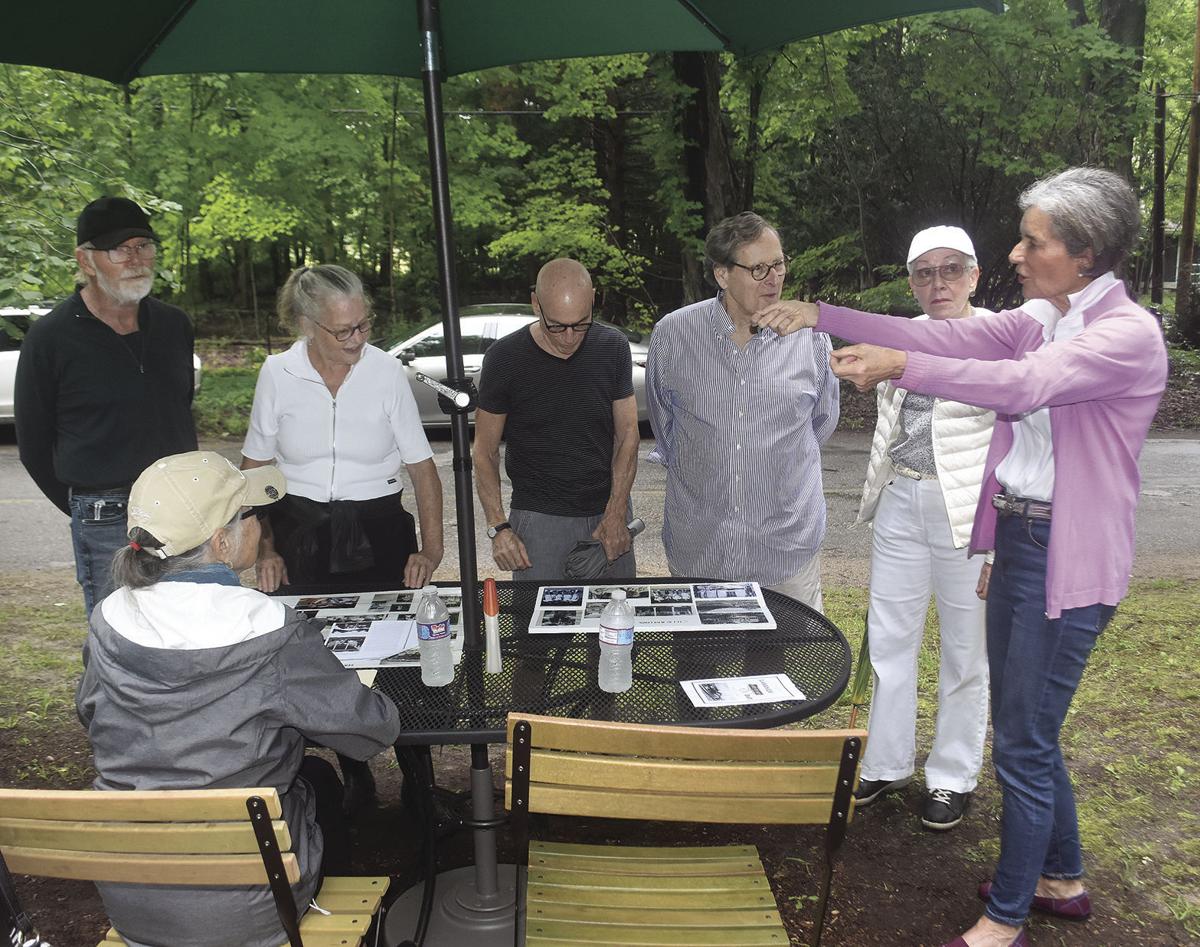 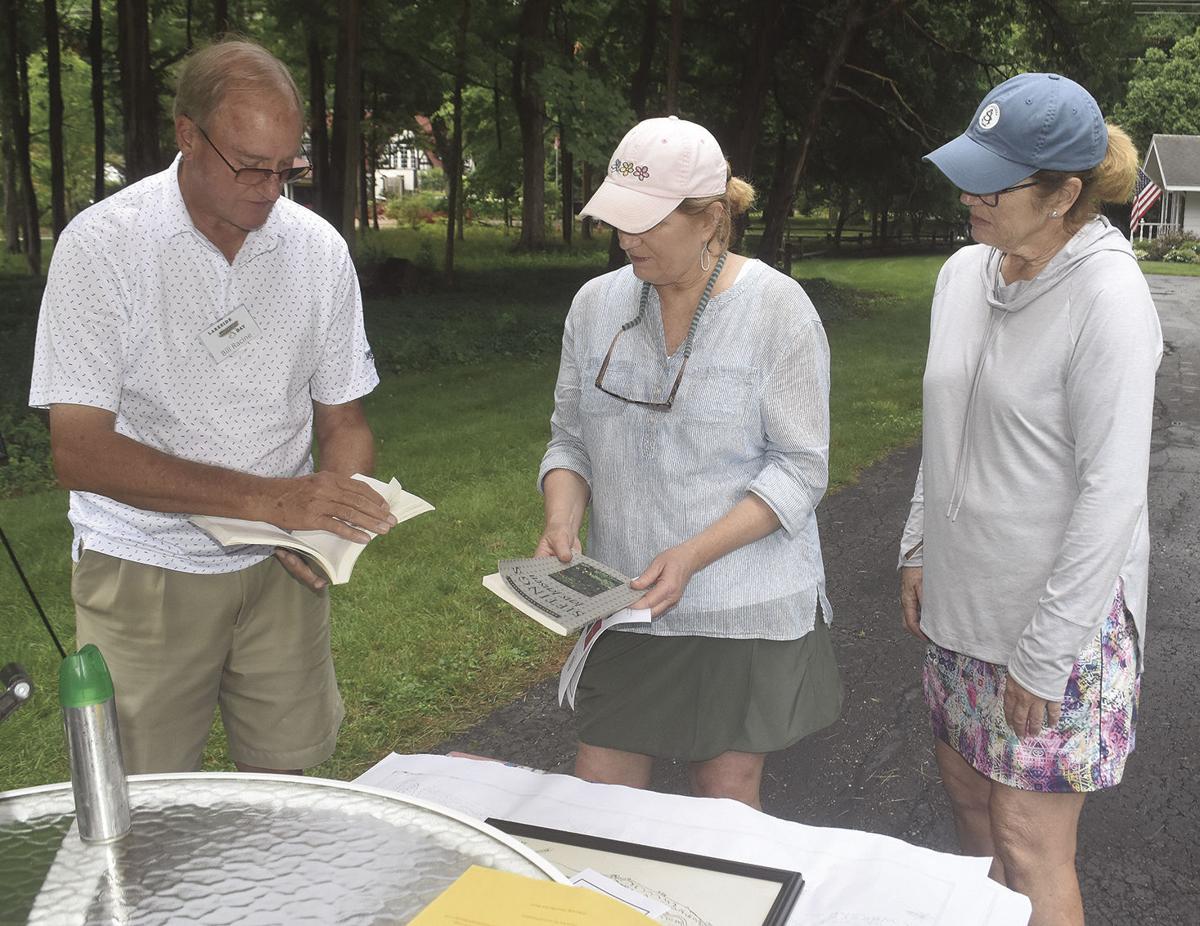 Bill Racine (from left) goes over some books on Jens Jensen with Lisa Anderson and Kim Collins on Lakeside Association History Day.

Janet Schrader (from right) shows an arrowhead she found on a local beach to Ellen LaFountain and David Derbyshire during the July 17 Lakeside Association History Day.

Bill Stevens (seated at left) points towards the home where John Paul Stevens once resided during the July 17 Lakeside Association History Day.

Bill Racine (from left) goes over some books on Jens Jensen with Lisa Anderson and Kim Collins on Lakeside Association History Day.

LAKESIDE — History came to life in and around Lakeside on Saturday, July 17.

The 2021 version of the Lakeside Association’s History Day was held with six stations in Lakeside, Union Pier and Harbert hosted by an all-star cast of “historians” who explained the unique stories related to everything from

Janet Schrader, sand sculptor and former Chikaming Township Park Board member, talked about the history and future of Cherry Beach at a Lakeside History Day informational table set up near the beach access stairway, noting that the property now owned by Chikaming Township was first bought from the state by William Cherry about 120 years ago, later selling it to Fred Warren (E.K. Warren’s son).

“Ninety-nine years ago last month he (Warren) donated this parcel to the township. It was our first park,” she said.

The public access to 260-some feet of lakeshore has been used by the public ever since.

Schrader said the 400 feet of beach to the south has also been a place where many have recreated over the years, and Aug. 18 is the tentative date for the last signature to officially add that acreage to the township’s Cherry Beach property. She said donations from the public helped raise the $4.2 million for the purchase.

She noted that over the last couple of years a group of volunteers built access stairs to both Cherry Beach and Harbert Road Beach after storms and high water levels washed the old ones away. (The township is currently surveying residents about the possibility of rebuilding the Pier Street stairway).

Pat Fisher, founder of Harbor Country Hikers, also was on hand at Cherry Beach to talk about the lakeshore.

Architect Margaret McCurry covered the locations and ideas that inform local work by herself and her late husband, Stanley Tigerman, in front of the unique 1983 summer home at 9151 Pier St. in Lakeside they designed together.

History Day visitors toured the sumptuously landscaped grounds around the house. McCurry also had a map of the surrounding area showing the many homes she has designed along with photos of them.

While McCurry and Tigerman sometimes collaborated (the Sims Education Center at Fernwood Botanic Gardens in Niles is another joint venture), they typically worked on their own projects.

Tigerman’s architectural achievements included the designs for The Illinois Holocaust Museum and Education Center in Skokie, the Illinois Regional Library for the Blind and Physically Handicapped in Chicago, and the POWERHOUSE Energy Museum in Zion, Ill. He passed away in June 2019 at the age of 88.

For more, go to http://tigerman-mccurry.com/

The story of Swift Lane and the Swift Estate was told by Michel Miller and Jean Smith (both live there, Miller in the remodeled dairy barn and Smith near where Harold Swift’s house stood).

Smith said Harold Swift (a grandson of the Swift Meat Packing Company’s founder) bought 80 acres along the lakefront in 1915, built a farm house and barn, raised animals, and supported his beloved University of Chicago.

“He would bring people out from the University of Chicago and have conferences,” she said, later adding that he was appointed to the University Board of Trustees at the age of 22 and when he was 37 became chairman.

“He spent, really, his life giving back to the University of Chicago and had a vision for the school,” Smith said.

The lasting impact of the Stevens family on the Lakeside lakefront at Stevens Lane was presented by Bill Stevens, whose grandfather, Ernest James Stevens, bought land along the lake in Lakeside in the 1920s.

The family stayed in a large tent on the beach in 1924 while their summer home was built.

One of the nearby family homes was once occupied by the late Supreme Court Justice John Paul Stevens (who served on the high court from 1975 to 2010).

“At the time it was the world’s largest hotel,” Bill said.

At the Gintaras Resort Lakeside History station, local historian Nick Bogert said Paul Hoffman, President of Studebaker Auto (after being brought in to rescue the company in the 1930s) and a member of President Eisenhower’s “Kitchen Cabinet,” summered in Union Pier. Hoffman also served as administrator for the post-World War II Marshall Plan.

In 1960 he sold his compound at 15860 Lakeshore Road to the Karaitis family, who turned it into Gintaras Resort, which catered to Lithuanians.

Vicki Gudas, who has a long connection with the resort, said the new owners were displaced people from Lithuania who ran a small grocery on the Southwest Side of Chicago.

“The name ‘Gintaras’ comes from the word amber in Lithuanian, and the reason a lot of Lithuanians were attracted to this area is because the Michigan coast reminded them of the Baltic Sea,” Gudas said.

The “White House” was the hub of the resort for most of its history. Gudas said it included a full restaurant that was open to the public on Sundays, and a priest from Chicago would say Mass in Lithuanian on the bluff overlooking Lake Michigan.

Although the White House no longer stands, Kathy Peoples (one of Gintaras Resort’s current owners) said there are 10 rentals on the property including the “Log House.”

Bill Racine, owner of a Jens Jensen landscaped property in Lakeside along Meadow Lane, and contemporary landscaper Doug Hoerr, spent Lakeside History Day discussing local properties and designs by Jensen, one of the early 20th Century’s most prominent landscape designers and conservationists who worked in Lakeside.

Jensen used native plants and natural designs, advocating that gardens, parks, playgrounds and cities should in harmony with nature. Jensen designed and built many Chicago parks and was involved in landscaping a number of Lakeside area homes.

Theresa Richter of the Lakeside Association said a native Black Tupelo tree was donated to be planted in the park, and when she, Gunner Piotter and Peter Van Nice were watching it be planted and came up with the idea to replace invasive shrubs and overgrown trees with native plants. Following Township Board approval, strong community support helped make the current array of 21 trees (most with dedication plaques) possible. Varieties include White Pine, Dogwood, Sugar Maple, Redbud and Burr Oak.

“You made this happen,” Richter said to those assembled in the park July 17. “The Lakeside Association benefits, the neighborhood benefits, you all signed on the dotted line, which is amazing.”

Jim Parsons said he dedicated one of the trees (an American Beech) to his parents, Lorraine and Keith Parsons.

Richter said the land where the trees have been planted was donated to Chikaming Township by the Hinkle family in 1984 (at the time township offices were in Lakeside).

Next up in Lakeside is the annual Ice Cream Social (from 5 to 7 p.m. Saturday, Aug. 7) at the Lakeside Park Gazebo at Lakeside Road and Red Arrow Highway.

The Rotary Club of Harbor Country will again join the Lakeside Association for ice cream and cake while raising money for scholarships for local high school students – $5 gets you ice cream, homemade cake and cookies, and more. Live music, activities for the kids, and the traditional cake auction! The best-decorated cakes will be auctioned off at 6:30 p.m. with proceeds going to the Lakeside Association Scholarship Fund.