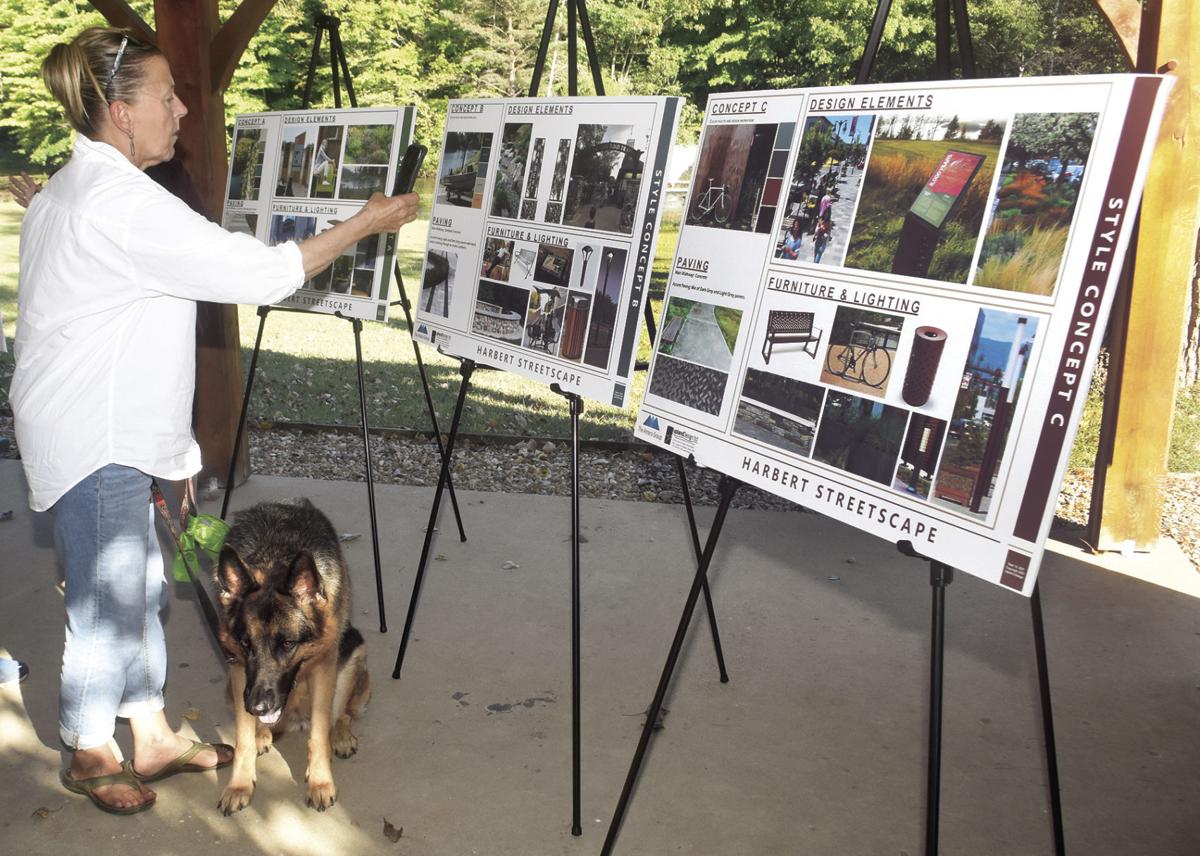 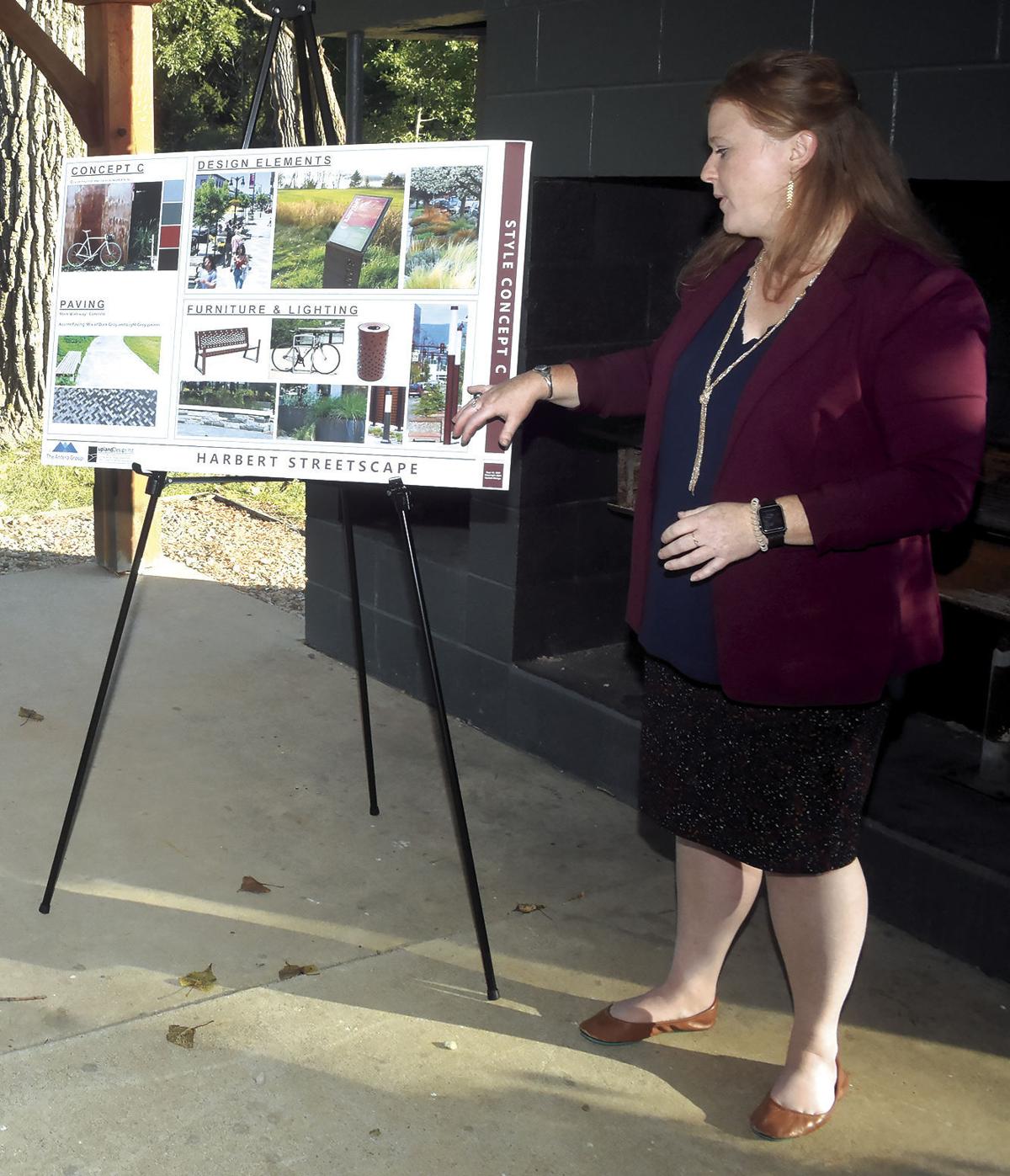 Liz Dafoe talks about one of the three design concepts introduced during the Sept. 15 Harbert streetscape design charette held in Harbert Community Park. 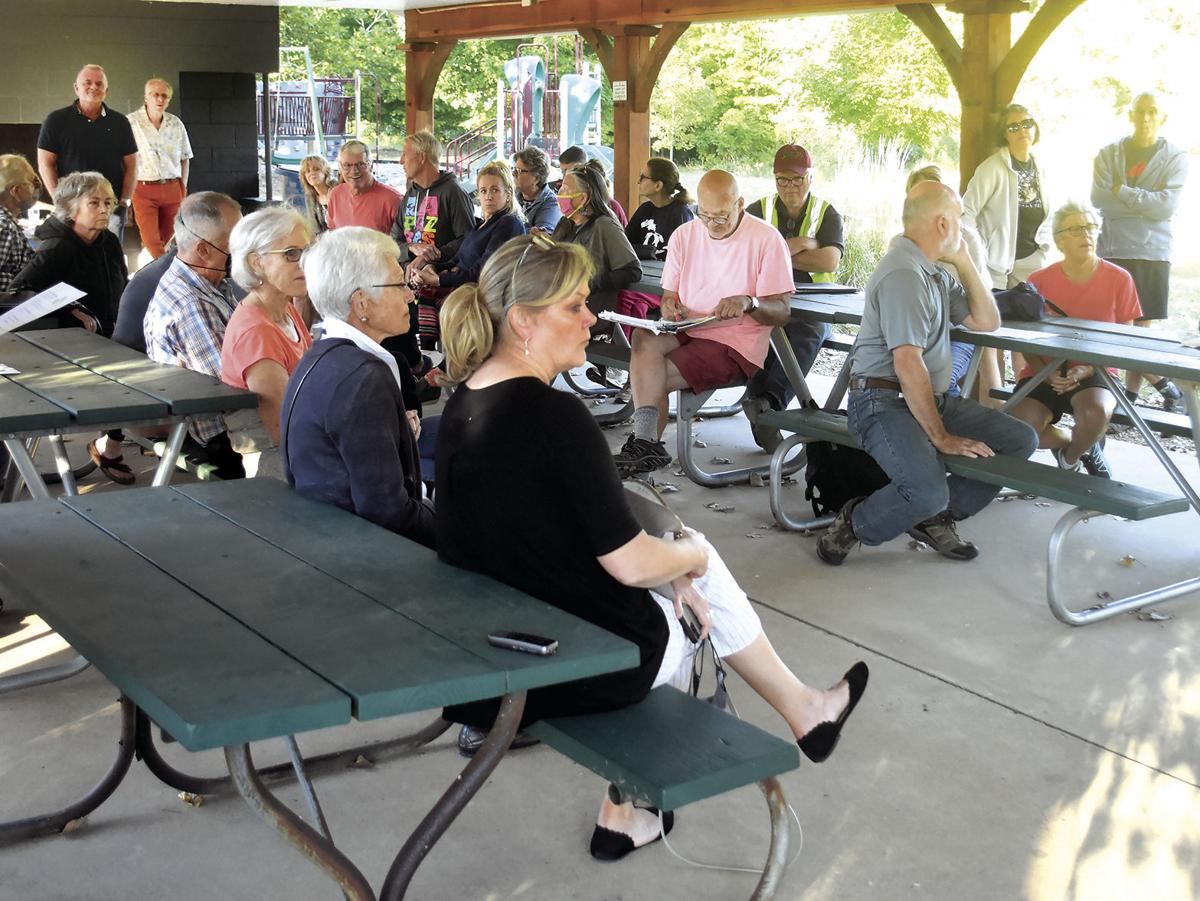 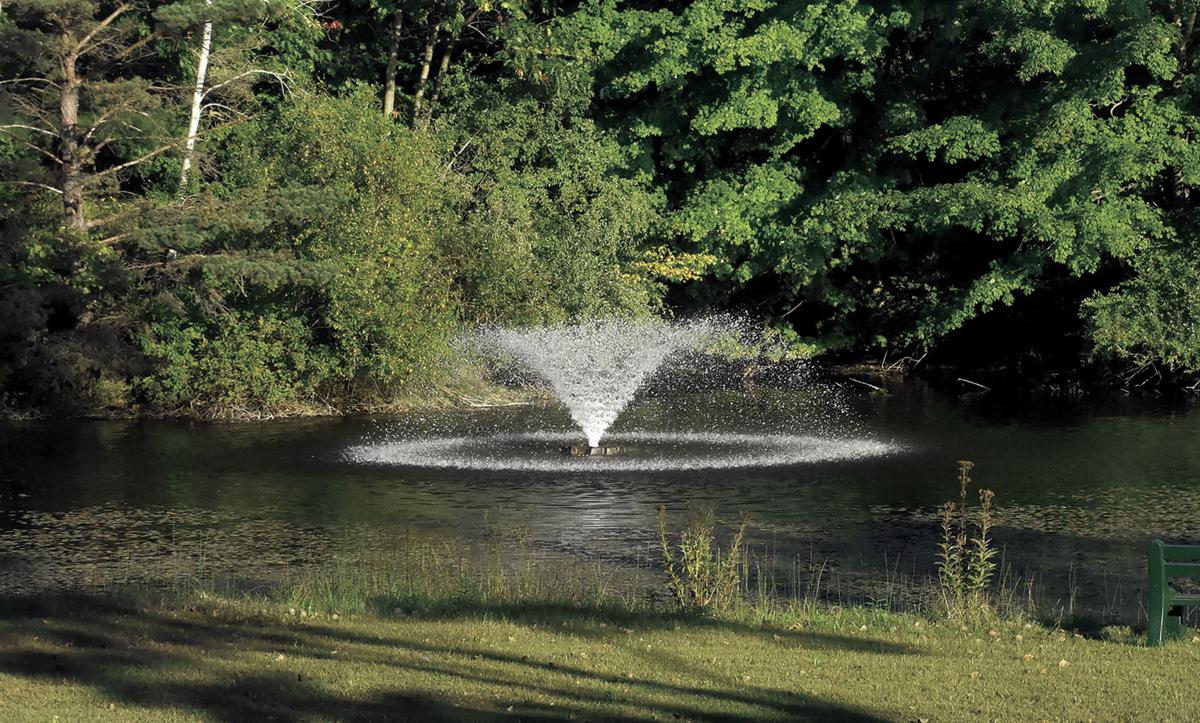 The Harbert Community Park pond fountain in action on Sept. 15.

Liz Dafoe talks about one of the three design concepts introduced during the Sept. 15 Harbert streetscape design charette held in Harbert Community Park.

The Harbert Community Park pond fountain in action on Sept. 15.

HARBERT — About 60 people joined in the process of determining what the new “streetscape” design along Red Arrow Highway in Harbert will be during a Sept. 15 “charette” session held in the Harbert Community Park pavilion.

“This is really about Harbert and how Harbert is going to look and feel,” said Eric Neagu of Antero Group, later adding, “We wanted to vet that with you all who live here, work here, play here, so that we could get some more feedback and then distill that down into an idealized design concept.”

Neagu and Liz Dafoe of Upland Design presented three different concepts that he said “we kind of collectively built out internally based on feedback from the Park Board, from elected officials and from other local participants (residents) who are involved in the planning of this new vision.”

Once they have reviewed the public input from the Sept. 15 session, Neagu said a more full, detailed design that will propose locations for different streetscape elements such as furniture and lighting.

“If there are other issues that need to be addressed, for instance parking, we’ll start to look at that in detail,” he said.

“We’re hopeful with all the federal funding that’s coming out that we’ll be able to tap into some of that to get some grant funding to support the project,” Neagu said, adding, “Depending on funding we would love to see something happen next summer.”

He later noted that there’s no specific timetable for the project – “It’s going to be a function of funding.”

He said a lot of the large amount of federal funding coming out is for the first time being aimed at tourism and service industries.

“It’s a very unique period, and we’re optimistic that with some strategies we’ve got that we’ll be able to identify some funding sources that will help realize this.”

Neagu said the Sept., 15 gathering was held in the context of three interrelated projects – Harbert Community Park (which is in he process of being open up and revitalized); the multi-use path planned for the lake side of Red Arrow Highway as part of the road project currently under way adjacent to the park; and a “streetscaping” project in Harbert that “captures the existing character and values … but also projecting a new sort of sensibility to Harbert.”

Neagu said the project, primarily to be developed on the Harbert Community Park side of Red Arrow Highway with some crosswalks to sites like Harbert Swedish Bakery and stand-alone design “nodes” (points where pedestrian-related amenities are grouped), along with possible lighting on the other side to create some balance, is expected to stretch from the north end of Harbert Community Park to Harbert Road (maybe as far south as the Post Office).

He said while the approach is similar to what was done with Union Pier, the look, the feel is going to be more specific to Harbert.”

“We want to create an identity for each community.”

Neagu said parking is not as big an issue in Harbert as it was when the Union Pier Streetscape was being planned (that project ended up including a trailhead with parking spaces and rest rooms).

In introducing the three design concepts, Dafoe said, “These are really talking to styles, the feelings, colors, the materials” before describing each individually as follows:

Concept A – thematically utilizes natural colors and plays off woodlands and the greens from the trees – utilizes wood or recycled lumber in the furniture, natural landscaping, wayfinding/interpretive signage, concrete that could include color, and low-key downlighting.

Concept B – focuses on a river/lake theme incorporating some cobblestone, raw iron, some natural rocks and some dark black metals with some grey and black accents.

Concept C – While both A and B incorporate a lot of natural earth tone colors, Dafoe said “we’re trying to bring a little bit more of that touch of modern” in Concept C. Including copper-hued corten steel, some pops of color here and there, along with concrete and some brick pavers in grays and blacks, and a natural stone wall.

She said the designs include “lots of grasses” to mimic the beautiful landscape already at the park. She also said all options are expected to carry a similar cost.

Each concept included a different take on amenities like benches, light poles and trash receptacles.

Those attending the Sept. 15 design charette (defined as a planning session where citizens, designers and others collaborate on a vision for development) were invited to fill out a survey which asks questions such as “Of the above three concepts, which is your favorite?” and “In your favorite concept, what was your favorite element?” With options of “Site Furniture (i.e. Bench, Table, Litter Receptacle, Lighting, Signage) Paving Material; or Landscape Enhancements.”

The three design concepts and survey can be viewed and filled out online by going to the www.chikaming township.org website and clicking on Harbert Concept Styles and Survey under Township News.

“We are not married to any of them,” Neagu said of the three concepts. “What we want to hear is I like this part of C, I like that part of A … and if there’s something not on here but you’re super-passionate about it .. we want to hear about that.”

He also said they are open to including some components relating to Harbert’s history in the design.

Dafoe said they want to keep the lighting minimal, so the concepts include shorter path lighting (likely to be paired with some larger fixtures).

In response to a question about any additions to the park including permeable surfaces, she said the seating nodes are likely to cover small areas along the meandering trail through the park .

“We do everything as sustainably as we can, so if we can integrate rain gardens, native plants, permeable pavers, we’re going to do that,” Neagu noted,

Deborah Hall Kayler noted that the lighting structures illustrated on the three concepts are different from those installed in Union Pier, adding that “hopefully we’re not going have that volume of lighting” (a sentiment that seemed to be shared by many in attendance).

Chikaming Township Supervisor David Bunte pointed out that the new street light system in Union Pier was mandated by the Michigan Department of Transportation, adding that while there are a lot of poles there, “we chose the best lighting we could from what we had to work with, within the requirements.”

Bunte later said a much higher level of lighting was required in downtown Union Pier area than will be in other parts of the township (with the possible exception of Sawyer) due to the number of businesses and location of sidewalks, crosswalks and the pedestrian trail all concentrated in a confined area.

“None of this infrastructure had been improved for 50, 60 years,” Bunte said, later adding, “This project (Harbert), we’ve got all kinds of options. The Sawyer project will be the same thing. In Union Pier we took advantage of 100 years of infrastructure that had not been repaired or replaced, and did it all at once. The same thing is going to happen in Lakeside because next year they’re going to do Lakeside Road and Pier and the end of East.”

Bunte said the Harbert streetscape project is the beginning of the process, and finding out what the costs will be, what the public wants it to look like, and what funding is obtainable before presenting a formal proposal are the next steps.

“You have to plan and look to the future. That’s what we’re trying to do,” he said.

As far as the actual Red Arrow Highway project schedule, Bunte said the current construction work in Harbert including the 10-foot non-motorized path across the park to Harbert Road is expected to be completed by the end of the year.

“They’re grading the rest to Sawyer Road, so that when we get funding through grant opportunities and support from the county we can continue,” he said.

Bunte added that the Berrien County Road Department is hoping that through 2024 road work on the stretch of Red Arrow Highway from U.S. 12 to I-94 in Bridgman will be completed.

As far as which portions of the re-done Red Arrow Highway will be three lanes (two for traffic with a center turn lane), Bunte said that is the Road Department’s decision.

“We have three lanes from Sawyer Road down here to Harbert Road … south of that they still have not made a decision,” he said, adding that the roadway near Warren Dunes State Park was left four lanes.

Bunte also said the State Park has agreed to allow the non-motorized path to go through on that section of the highway.

Public comments made after the presentation on the design concepts was completed included the following: “Try not to urbanize it too much;” “It would be nice to have an area where bikers could gather;” “I like the cobblestones, but I don’t want everything cobblestone. It’s very busy visually;” “I’m just grateful Red Arrow is being repaired;” and “Thank you everybody involved in everything in our community, it’s just so lovely. There’s a great energy and a vibe.”

Also touched on during the Sept. 15 gathering was changes taking place at Harbert Community Park.

John Mac Manus of Altamanu Landscape Architecture said the park is being “re-envisioned” to be more open and united.

“The vision we have is a park you can stroll around in, that you can really get to the water’s edge and potentially go to an overlook over the water,” he said, adding that an amazing amount of progress has been made over the last few weeks thanks to the Friday morning efforts of volunteers such as Garth Taylor and Arthur Anderson.

“A couple of weeks ago you could hardly see the dog park … they’ve removed all the brush … so it’s starting to open up.”

He said the goal is to have Harbert Community Park be set up as “a series of rooms, and each room will have some sort of concept behind it.”

As an example he said the former Little League field is being transformed into a “big meadow” with “a proper stage” where the community can get together for events (including anticipated performances by Taylor).

“In the end, hopefully, we’ll have a slew of open space, green space, that will unite the properties on this side of the road (including the park and township offices).”