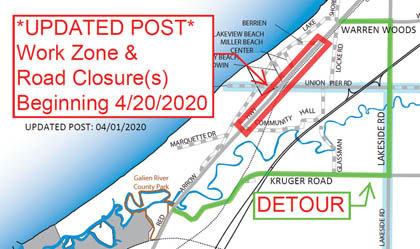 A graphic map supplied by the Berrien County Road Department illustrates the detour route for the closure of Red Arrow Highway set to begin April 20. 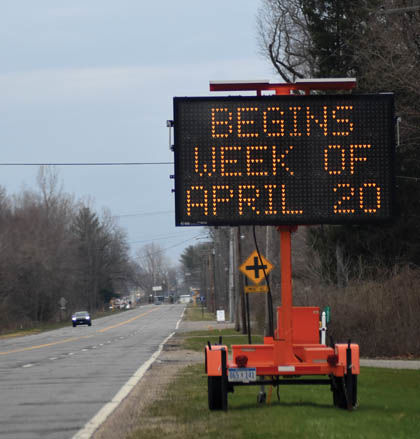 A sign warns of the impending closure of Red Arrow Highway in Union Pier.

A graphic map supplied by the Berrien County Road Department illustrates the detour route for the closure of Red Arrow Highway set to begin April 20.

A sign warns of the impending closure of Red Arrow Highway in Union Pier.

According to the Berrien County Road Commission, a contractor will be reconstructing the sewer located in the road right-of-way beginning on April 20 in preparation for Red Arrow Highway road construction slated to start in July 2020.

A Road Commision press release states: “Specific Red Arrow Highway intersections will be closed off to traffic, at different times for this project: Community Hall, Townline/Union Pier Road, Berrien Street. The associated work zone along Red Arrow Highway will have an established detour route (as noted above in this article) for all through traffic, until project is completed.  Work is anticipated to take 4-5 weeks.

Kevin Stack, an Engineering Supervisor with the Road Department, said the project will stretch from Berrien Street to Community Hall Road and on Town Line Avenue/Union Pier Road from the railroad tracks west through the “downtown” area.

Most aspects of the overall project were originally planned to take place a few years from now, but doing them at the same time was seen as the right move, especially since the Galien River Sanitary District (GRSD) portion requires so much major excavation.

“If we didn’t do this we’d be torn up for three or four years,” said Chikaming Township Supervisor David Bunte.

Stack said a big component of the project (the first part of construction and “probably bigger than the road project”) involves the GRSD putting in new 48-inch lines (20 feet deep) along Red Arrow Highway and also install new pipes and manholes in the downtown Union Pier area.

Although the goal is to have at least one lane of traffic each way maintained for much of the overall road project, the sewer portion at the Red Arrow Highway-Town Line Avenue/Union Pier Road intersection (where it all begins) is a different story.

“That intersection will be shut down … for about a four- to five-week period to get that sanitary sewer in place,” Stack said on Feb. 12.

Once the GRSD project is done downtown, Stack said Town Line heading from the lake toward Red Arrow Highway will be open to one-way traffic only, and there will be no parking along that portion of the road while the road project continues.

During the Feb. 12 hearing it was reported that a new parking area in “the RSVP lot” near the downtown area on the south side of Town Line Avenue will be available for those looking to visit Union Pier.

The timeline for the road portion of the project as of Feb. 12 was set to start after July 4 (so as not to impact the Memorial Day and Fourth of July weekends).

Stack said on Feb. 12 that the goal is to have all of the asphalt in place by the end of the year including curb and gutter, storm sewer and other underground work. He added that weather will be a factor in reaching that goal.

Stack said Wightman and Associates have created a website (https://gowightman.com/project-updates/red-arrow-highway-union-pier-corridor-improvements-project) specifically to provide updates, meeting dates, plans and other information on the Union Pier project.