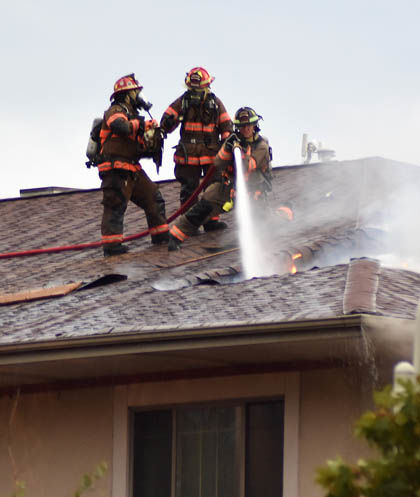 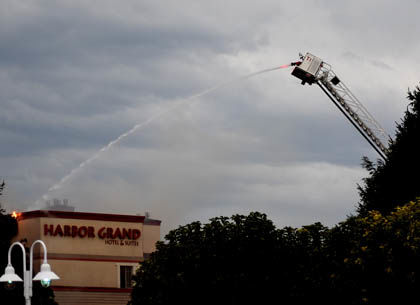 Pouring water on the flames of the Harbor Grand fire from above on the evening of Friday, Sept. 27. 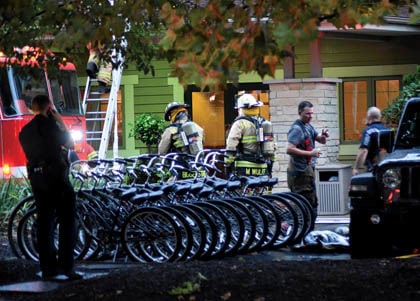 Emergency personnel gather near the entrance to the Harbor Grand during the Friday evening blaze. 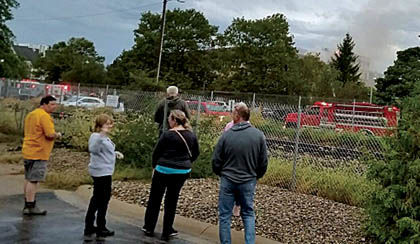 Watching the battle against the Harbor Grand fire on Friday, Sept. 27. 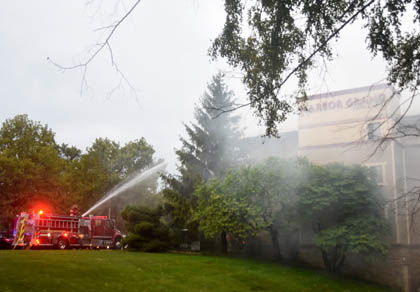 Spraying the flames from below.

Pouring water on the flames of the Harbor Grand fire from above on the evening of Friday, Sept. 27.

Emergency personnel gather near the entrance to the Harbor Grand during the Friday evening blaze.

Watching the battle against the Harbor Grand fire on Friday, Sept. 27.

Spraying the flames from below.

NEW BUFFALO — Firefighters battled a stubborn blaze on the third floor of the Harbor Grand Hotel & Suites in New Buffalo on the evening of Friday, Sept. 27.

"Fire Department personnel found smoke and flames on the third floor of the building. The hotel was evacuated and there were no reported injuries.

The fire remains under investigation."

The blaze was concentrated on the northeast corner of the building where water was being sprayed through holes from above), below and from the roof itself where three firefighters were literally right on top of the action.

New Buffalo Township firefighter Noah Sharum was one of those who battled the blaze on the roof.

Sharum said he was on the Harbor Grand roof with Capt. Dan Mandalas and Lt. Mark German.

"Dan and Mark were sounding the roof to to make sure there were no weak spots, I was spraying the water, and once they got to a spot they cut two or three holes in the roof and then we were just trying to contain the fire so it didn't spread."

Water was also coming in from above (a New Buffalo city fire truck with a tall ladder) and below from a township fire truck.

Sharum said the roof was so hot (600 to 700 degrees) that it would light back up after the flames had been extinguished.

After about an hour on the roof the firefighters were pulled off when the lightning storm picked back up, but the battle went on inside the hotel.

"The whole time there were crews inside that were ripping down drywall and getting things out of the way so we could clear out all the hot spots," Sharum said.

He said four rooms on the top floor were heavily damaged.

"You could stand inside and look up and see the sky."

Sharum said fire departments were on the scene until around midnight.

On Friday, September 27, The Harbor Grand Hotel was struck by cloud-to-ground lightning at 5:44 p.m. Fire ensued, presumed to originate in the attic space above third floor guest rooms.Hotel guests, restaurant patrons, and staff were evacuated as fire departments from New Buffalo, Chikaming, Michiana, and Long Beach responded to the 911 call. At approximately 8:45 p.m., the fire was extinguished.

In addition to damage from the fire, the building has suffered extensive water damage. Over the course of the next 8-10 months, it will be stripped to the studs and rebuilt, with the intention to reopen the lobby and restaurant in April 2020, followed by guest rooms in early June.

While we are sad to close our doors for the first time in almost 20 years, we have much to be thankful for.

First and foremost, for our amazing staff who calmly ensured the safety of every person in a full house during the first moments of a very frightening situation. Then immediately returned to hospitality mode, attending to displaced guests with grace and compassion. There are no words for our gratitude and pride, other than to say we are honored to know each of you, and blessed to work with you.

For the volunteer firemen and women who selflessly place themselves in harm’s way to protect people and property. Your courage and generosity of spirit is admirable beyond measure. We are so grateful for your service.

For the timely assistance of local law enforcement the day of and following the fire.Those first hours are disorienting to say the least. Guidance through next steps was grounding and immensely helpful.

And finally, for the love and support of the community – friends, colleagues, neighbors, and patrons. We are touched and buoyed by every word and gesture. And reminded why we continue to make this place our home. The heart of this community is extraordinary. We feel very fortunate to be part of it.