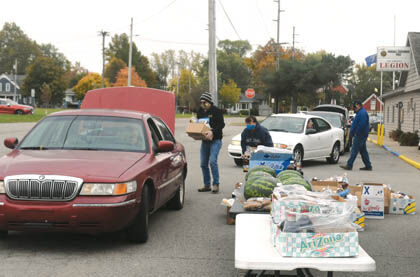 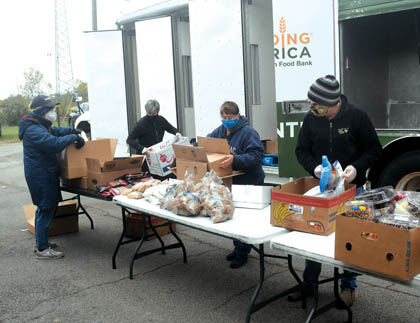 BENTON HARBOR — It is es­timated that an additional 14,000 people in Berrien, Cass and Van Bu­ren counties are experiencing hun­ger today compared to before the COVID-19 pandemic.

“Before the pandemic, 13.5 per­cent of residents in the three coun­ties our southwest branch serves faced hunger. Now, we estimate that around 18.6 percent of the pop­ulation is struggling with hunger,” said Molly Kooi, communications manager for Feeding America West Michigan.

That’s roughly the entire popula­tion of Cass County, 52,000 people, now unsure of where their next meal might come from.

Area agencies that distribute food to those in need have all seen in­creases in the number of folks com­ing to their food giveaways and pan­tries, even as more things open up and jobs return.

The Southwest Michigan Community Action Agency (SMCAA) usual­ly serves about 5,000 families in a three-month period, but from April to June this year they served 11,000 families and are still seeing high­er­than-average numbers at their monthly drive-thru pantries.

“The price of groceries has gone up,” Kim Smith Oldham, execu­tive director of SMCAA, said. “Everybody that’s on a fixed income – they can’t afford to feed themselves, buy their medications. So there is a great need right now.”

About 27 percent of tri-county residents calling 211 between April and October needed help with food, according to 211’s data dashboard (211 is a free and confidential statewide service that helps people find local resources).

The top need during that time was for food, followed by housing/shelter and utilities. These were also the top needs during non-pandemic times.

Berrien County ranks fourth out of Michigan’s 83 counties for food requests to the 211 line during the pandemic.

Carole Sternaman, executive director of Hope Resources – a food pantry and resource center in Coloma, said the demand for food actually went down a lot during the stay-at-home order portion of the pandemic, for them.

“I attribute that mainly to the unemployment and stimulus checks. Also, the kids in the school districts were being fed. So the families were fine,” she said.

Now, however, demand is on the rise and they’re seeing a lot new families coming in for food.

“I’m seeing people that I haven’t seen since last year, or January/February,” Sternaman said. “I don’t know if that will continue. I think part of it is the unemployment running out.”

“At first when the pandemic hit, a lot of people just didn’t want to go to the grocery store,” she said.

Kooi said Feeding America West Michigan saw that at their events too, along with many seniors feeling like it was the only safe place to get groceries.

“Obviously we see new people all the time, all year long, but we’re seeing big groups of people we’ve never seen before because they never needed our help,” she said. “Those are people who always had a steady job, but COVID happened, and now they don’t. Or school closed and now they’re home with their child.”

Kooi said Feeding America West Michigan only added 14 more mobile food pantry events this year between March 16 and August, but they are distributing about 50 percent more food during the events.

What allows them to distribute that much more food to their agency partners and mobile pantries, is an increase in support, and just buying more food to put on the shelves, according to Kooi.

“The food is coming in the same way as it always has, donations and purchasing, but we’re just getting more of it to meet the increased need,” she said.

Sternaman said the United States Department of Agriculture (USDA) has “flooded” Hope Resources with inexpensive food. “So it’s not costing us more to buy the food,” she said.

Area farmers and community gardens have also added to the ability of local agencies to give out food while the need is so high.

Another big need for many of SMCAA clients is personal hygiene products.

While some of the need has started to decline again, Kooi said that heightened level of need isn’t going away anytime soon.

“A lot of people were pushed past the point of a quick return, so we’re still trying to support people as they get back up on their feet,” she said. “Also with the cold weather coming, a lot of people will have increased utility bills and outdoor work will reduce. So those two factors always heighten the need for us, especially in Michigan, but those things coupled with the long-term impact of a virus like this, there’s just an ongoing need.”

All three agency officials said they couldn’t do what they do without volunteers, and that they are preparing for that heightened need going forward.

“Food is a crucial part of a healthy life,” Kooi said. “Outside of income and a roof over your head, food is one of the most crucial needs. We’re ready and able to meet the need. We’ve prepared for that increased distribution through this year and into next.”