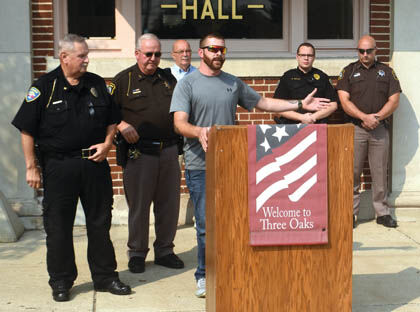 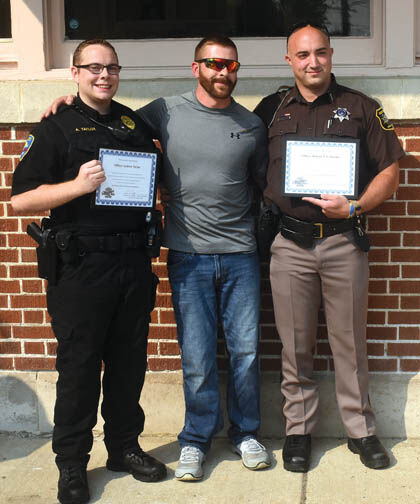 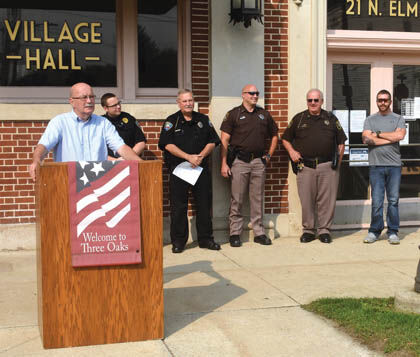 THREE OAKS — Police officers Robert Martin of the Berrien County Sheriff's Department and Andrew Taylor of the Three Oaks Police were honored as lifesavers on Sept. 16 in downtown Three Oaks, and nobody was more grateful than the man they saved, Cody Keller.

"I wouldn't be here today, I wouldn't be there for my son if it wasn't for you guys' quick action … Thank you so much guys from the bottom of my heart. I've got a lot of love for you both," Keller said after the officers were presented with Lifesaving Award certificates and pins.

"He needs his dad around."

Three Oaks Police Chief Denny Buller explained the pertinent incident as follows: "On January 19th (2020) about 10 O'Clock at night there was a terrible snowmobile accident on Stickles Road in Three Oaks Township. Officer (Andrew) Taylor responded along with Robert Martin, and because of their response they saved a young man's life — he lost his foot in the accident."

Buller said the doctor who treated Keller indicated "if they wouldn't have done what they did with the tourniquet he'd have died."

Berrien County Sheriff Paul Bailey noted that "All the training and all of the stuff that we have to go through paid off for the person they saved … both of them knew what to do, knew how to apply the tourniquet and saved his life."

Keller said on the night of the accident he and a friend were racing through the snow (which was both on the ground and in the air) and didn't see the road until they went airborne. He later woke up in the middle of a field, and went in and out of consciousness.

"I'm pretty sure I flew over my handlebars .. and ran myself over," he added.

Keller said the other rider rolled his snowmobile and suffered a collarbone injury, but was able to remain conscious and made a phone call for help to his father (who immediately contacted Martin).

Martin (a lifelong resident of the area) said it didn't initially appear to be a serious situation, but upon arriving at the scene it became immediately apparent that it was a bad accident and they called for first-responders and paramedics.

Taylor was on scene quickly.

"Three Oaks PD brought the medical supplies needed," Martin said. "He brought his medical bag out and got the tourniquet — so the we applied it to his leg and it wasn't much longer before the paramedics showed up and they got him (and the other victim) down to Memorial as fast as they could."

"We train very hard everyday to go out and do what we do. We appreciate everyone here," Taylor said during the ceremony, later noting "You expect the unexpected. Tourniquets they work, the training it works. You don't expect to use a tourniquet ever, but you have it with you."

He later recalled responding to the accident.

"That night … it was snowing heavily and it was very hard to find him … I'm glad everyone responded and helped out so he's here today."

He added that they also did the best they could to immobilize the other victim until the ambulance arrived.

Martin's mother, Gayle Martin, noted that Keller knows her son so his presence "I think it comforted him and that helped a great deal."

Keller, who also thanked the paramedics, doctors and everyone else involved after the accident, noted that he is doing much better after eight months of physical therapy and rehabilitation.

Taylor, originally from the Detroit area and an officer in Three Oaks for about a year and a half, said he is transferring to a police department up north (he was trained in the Traverse City area).

Three Oaks Village President Dave Grosse said he considered it a privilege to be a part of the ceremony.

"This is the type of thing police officers do every single day… I'm glad they're around to keep us safe."