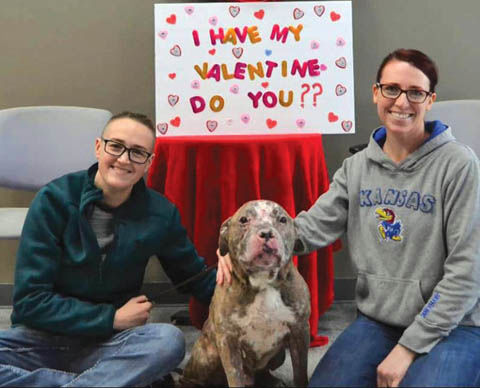 Jordan, left, and Jen Chapman pose for a photo with Marley on the day the Kankakee, Illinois, couple adopted the terminally ill pit bull from the Michiana Humane Society. 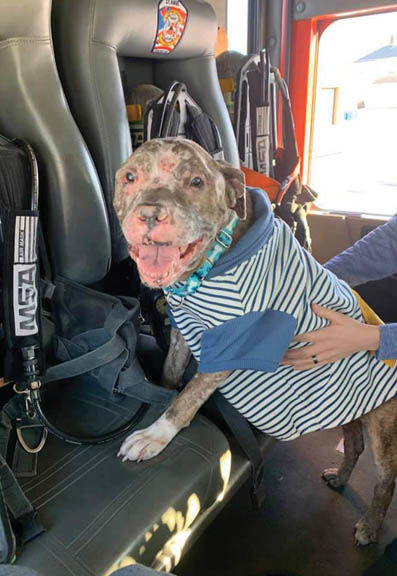 Marley checked another item off his “bucket list” when he rode in a fire truck thanks to the St. Anne Fire Protection District in St. Anne, Illinois. 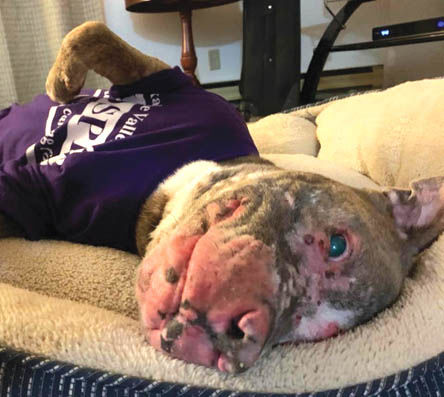 Marley is adjusting well to his new home, Jordan Chapman said, and they are working on checking things off his “bucket list” during the final months of his life.

Jordan, left, and Jen Chapman pose for a photo with Marley on the day the Kankakee, Illinois, couple adopted the terminally ill pit bull from the Michiana Humane Society.

Marley checked another item off his “bucket list” when he rode in a fire truck thanks to the St. Anne Fire Protection District in St. Anne, Illinois.

Marley is adjusting well to his new home, Jordan Chapman said, and they are working on checking things off his “bucket list” during the final months of his life.

MICHIGAN CITY — He may be the most unlikely of social media sensations, but a terminally ill dog found wandering the streets of Michigan City has a new home and thousands of followers.

“Marley” arrived at the Michiana Humane Society around New Year’s Eve with another dog after they were found running stray, according to shelter Executive Director Johann Humbert.

And after a medical check, the prognosis was not good.

“When they first came in we thought Marley might have mange. His skin was scabby and pink, and uncomfortable. Our vet assistant did a few skin scrapings looking for telltale mites but found none,” Humbert said.

“The pinkness was reduced and he seemed more comfortable, but he still had scabby lesions. So a couple of weeks ago we took him to Michigan City Animal Hospital. Dr. Bailey suspected skin cancer and wanted the go-ahead to send out tissue biopsies. That cost about $700, but we did want to confirm what the situation was.”

Unfortunately, the vet’s diagnosis was correct.

Marley “has a type of lymphoma that presents through the skin. His prognosis is less than six months,” Humbert staff.

Shelter staff, hoping to find a home for Marley to live out the rest of his life in comfort, started posting photos on social media.

“The thing is, Marley just loves people. He is a happy boy and thrives on attention,” Humbert said. “So we reached out for a hospice home for him.”

Enter Jordan and Jen Chapman of Kankakee, Illinois. Jordan runs a shelter and the couple has fostered a number of sick dogs over the years, according to Humbert.

Jordan Chapman said as soon as she heard the story, she was hooked.

“Someone that I’m friends with on Facebook shared Marley’s post about being up for adoption on Jan. 31, so I sent it to my wife, Jen, and basically said, ‘Gimme’,” she said.

“Jen said ‘Go get him,’ so, that weekend we drove an hour-and-a-half to meet Marley. I filled out an application and the staff told me he had a meet-and-greet later in the week,” Jordan said.

“The meet-and-greets didn’t work out, so I explained that I am the director of an animal shelter about an hour south of Chicago, so I am familiar with extensive medical conditions, and that my wife is an end-of-life massage therapist for hospice.”

The application was approved and they picked up Marley in early February.

Humbert called it “truly a match made in heaven.”

And because so many people had seen and commented on the Michiana Humane Society (MHS) Facebook post, Jordan said “it just seemed kind of natural to make him an Instagram so people could follow along with the rest of his life.

“Some of my friends don’t have Instagram, and some people I didn’t even know were asking about how to get those updates on Facebook, so I created a Facebook page as well, and they both have pretty much taken off.”

Anyone can follow the dog at marleysmiles and see what he’s up to. And a lot of people are doing so – Marley has more than 1,000 followers on Instagram and 4,000 on Facebook.

And the Chapmans say Marley is very happy in his new home.

“Marley couldn’t really have settled in any better to be honest,” Jordan said. “We expected to have a comfort curve with house training, but he’s been perfect. He nudged Jen around 3 a.m. his first night and she took him out, he went to the bathroom, and then he ran back into bed and got under the blanket.”

Marley went to a new veterinarian last week and will be starting chemo medication in the next week or two, “but that shouldn’t have any really awful side effects,” Jordan said.

“Hemlo! I met a super nice tech at the doctor today! She gave me a few cookies and told me how handsome I am! I met my doctor and she gave me lots of butt scratches, too! I will be starting a course of steroid pills to help make some of the lesions on my back and sides smaller, as well as help me not feel so itchy.

“My moms have been giving me Benadryl to help with that also, and my doctor said that’s great and that I can keep taking that as well! I also will be starting some chemo meds to help keep me comfortable. I will get that medicine every 3 weeks and it will hopefully reduce the size of a few of the bigger lesions, as well as help them close up and heal.

“I know that there’s no way to fully treat and make my cancer go away, but these medicines won’t be rough on my body & will still keep me comfortable enough to keep marking things off my bucket list! I was such a good boy at the vet, if I do say so myself. Thank you VCA County West Animal Hospital for seeing me today, and all the days moving forward, and being so gentle with me!

“Now I’m back home, curled up on the couch, having another great snore filled naparoo!”

“He had a hamburger last week, got his first Starbucks pup cup ... and got to be an honorary fire dog and ride in an engine with the St. Anne Fire Protection District,” Jordan said.

And he recently met with the staff of the Hospice of Kankakee Valley in Bourbonnais, Illinois.

Those were among the things on Marley’s “bucket list,” a roster of plans for things the Chapmans hope to do with him before the disease takes him.

“His bucket list has some fun things, some insanely random things, and some things that are kind of just out there that probably aren’t realistic,” Jordan said, “but we’re just going for it.

“Walk on the beach, see the Bean, go to the drive-in, visit Wrigley Field, meet someone famous, win on a scratch-off ticket, and receive postcards from all over – sure, dogs can’t read, but we just feel like we can make up for the last 13.5 years of his life, as long as we have a little help.”

She said she knows that Marley “feels the love,” even if he can’t read the posts.

“He still acts like a puppy sometimes though. He loves to roll around, chew on hooves, eat and snore. He’s such a character.”

Humbert said it was more than the MHS staff could have asked for.

“They have a bucket list that they hope to offer Marley wonderful experiences while he is still able to enjoy them,” she said.

“And when the time comes that he no longer has a good quality of life, they will help him to have a painless and dignified last day.”

Jordan said they’re hoping that time is still quite a ways off.

“We both already couldn’t imagine life without him,” she said.