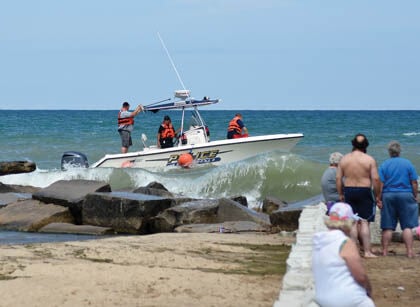 The New Buffalo police boat searches along the breakwater at the city's public beach on Friday, July 31. 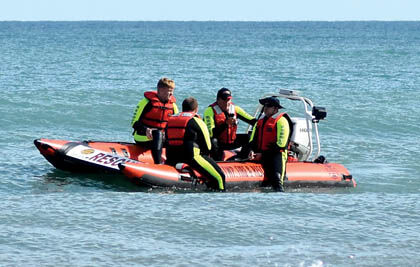 A search boat in the waters off the beach at Warren Dunes State Park on Friday morning. 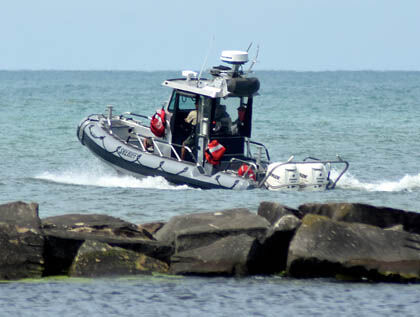 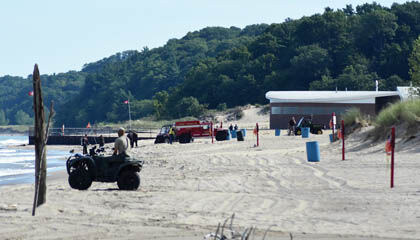 The New Buffalo police boat searches along the breakwater at the city's public beach on Friday, July 31.

A search boat in the waters off the beach at Warren Dunes State Park on Friday morning.

The turbulent waters of Lake Michigan wreaked havoc on the evening of Thursday, July 30, with three drownings taking place in New Buffalo, St. Joseph and at Warren Dunes State Park near Sawyer.

The New Buffalo Police Department reported that first responders were dispatched to the New Buffalo City Beach at 7:31 p.m. July 30 to assist with a subject (later identified as 24-year-old Wade Ameiss of Villa Ridge, Missouri) who had gone missing in the water near the harbor breakwall. Rescuers initially searched the water and the rocks in the break wall and were unable to locate the missing individual, a contractor working in the area.

New Buffalo Police reported that witnesses contacted emergency responders at 9:07 a.m. Tuesday, Aug. 4, to report a subject had been discovered along the beach in the Village of Michiana. Michiana/Grand Beach and New Buffalo Police responded and found the subject that had been missing in the water since July 30.

Recovery form the turbulent coastline was performed by the New Buffalo Township and Michiana Fire Departments. Police reported that Ameiss was transported to the Medical Examiner’s office and will be received by family thereafter.

"Our thoughts and prayers to the family and loved ones of Mr. Ameiss."

New Buffalo Police reported that waves were nearly six feet at the time of the incident and rip-tides were exceptionally strong. The high waves severely hindered the water rescue efforts. Two New Buffalo police officers suffered minor injuries while attempting to locate the victim from the break wall while the waves broke over it.

The Berrien County Sheriff's Department reported that  first-responders were called to the Warren Dunes State Park for a water rescue involving a 13-year-old female that was missing and last seen in the water at approximately 8:57 p.m. Thursday July 30.

First-responders and the U.S. Coast Guard conducted a search for the victim, but were unable to locate her in the water. The search was suspended after dark and resumed the following morning.

On Friday July 31, 2020, the Berrien County Sheriff’s Office Marine Unit and Dive Team along with the Lake Township Fire Department and Great Lakes Drone Company resumed the search. At approximately 12:36 p.m. Friday, July 31, Chikaming Township Police Department received information of a body that had washed up on the shoreline near Pier Street beach in Lakeside Michigan. Responding officers were able to confirm this was the missing 13-year-old female from Warren Dunes State Park.

Police say one man drowned in St. Joseph Thursday evening while attempting to rescue his kids who were struggling in the water.

The drowning victim in St. Joseph was a 44-year-old man from Lakeville, Ind. According to a news release, the man went into the lake after his children, ages 17 and 12, who were struggling in the water off Lions Park Beach around 8 p.m. Thursday.

The two kids were rescued by St. Joseph Reserve Officer Everett Gaston. However, the man did not make it and he was later pronounced dead at Lakeland Medical Center, St. Joseph. His name has not been released by officials.

According to the release, two more swimmers were caught in a strong rip current around the same time, but they were rescued by Fabian Weber, who was on a surfboard. Weber managed to pull Meghan Lynch and Vincent Ball onto his board, police said.

This is the second drowning off Lions Park Beach in July. An Illinois woman drowned a couple of weeks ago after her and her sister got caught in the same type of heavy surf that roiled Lake Michigan waters Thursday evening.

The New Buffalo Police Department included the following on its July 31 report:

These incidents are a grim reminder that Lake Michigan is exceptionally dangerous whenever there are high waves because there ARE rip currents. Be sure to check the National Weather Service for Beach Hazard Statements and check the warning flags whenever it is a windy day at the beach.