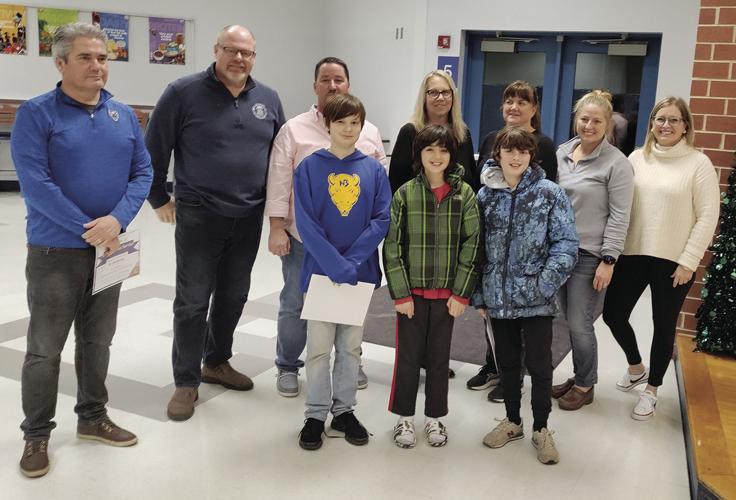 New Buffalo Elementary students (center) and Jose Martinez (left, posing with members of the Board of Education) were recognized for being involved in a recent successful application of the Heimlich maneuver. 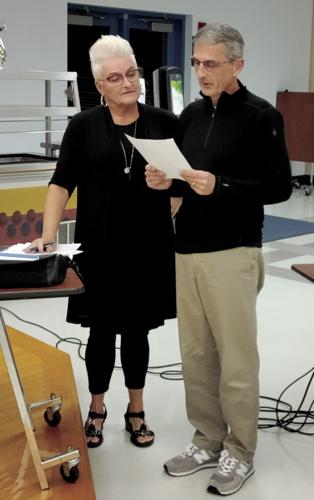 Paul Keller is sworn in as the newest meber of the New Buffalo Area Schools Board of Education.

New Buffalo Elementary students (center) and Jose Martinez (left, posing with members of the Board of Education) were recognized for being involved in a recent successful application of the Heimlich maneuver.

Paul Keller is sworn in as the newest meber of the New Buffalo Area Schools Board of Education.

NEW BUFFALO — The New Buffalo Area Schools Board of Education had seven options to choose from on Dec. 12 in filling a seat left open by the recent resignation of Frank Magro.

Presenting to the board (and answering some questions) were (in order of appearance at the meeting): Paul Keller; Jack Kennedy; Stephen Donnelly; Shannon Schroeder; Howard Speizer; Brian Dodge; and Ashley Grzywacz.

Two candidates were nominated and seconded for the position (Keller and Donnelly) with another (Grzywacz) nominated but not seconded.

After a motion to appoint Donnelly to the board deadlocked at 3-3 (with John Haskins, Lisa Werner and Joyce Lantz supporting and Trish Newton, Heather Black and Chuck Heit opposing) a motion to appoint Keller to the remainder of Magro’s term passed by a 5-1 tally (Heit cast the lone “no” vote after expressing his support for Grzywacz due to her being the lone applicant who was a candidate in the Nov. 8 election and her vote total of more than 800).

Keller will fill out the remainder of Magro’s term, which will expire at the next General Election.

During his address to the board, Keller said he has been teaching everything in social studies at the Lakeshore Public Schools since 2000, since 2019 has been Vice President of the Lakeshore Education Association, has served as a football coach for more than 20 years at both New Buffalo and Lakeshore, is the proud father of three New Buffalo graduates, and is married to a teacher in New Buffalo (both are lifelong residents).

Bowen said 100-percent of students tested met Math and ELA (English language arts) proficiency, adding that he feels tracking attendance is important. The elementary received an overall score of 97.8 with a variety of different factors figuring into that tally.

Caudle said the Middle School’s bottom 30 percent are getting extra “targeted intervention” ELA and math assistance at the end of the day.

“Hopefully we can grow that 96 percent that we have on the growth index,” he said.

Caudle also said strategies to get children who are chronically absent to attend school are being shared with parents and guardians.

Caudle said the school’s overall score is 94.55, adding that he believes “we’re moving the needle in the right direction.”

Ripley said all students participated in both the MSTEP and SAT tests at the high school last year, with all meeting the 100-percent proficiency targets in ELA and Math. She said the lowest score (75 percent on the school quality and student success index) is linked to the number of students enrolled in advanced classes and post-secondary education.

In other Dec. 12 New Buffalo Area Schools Board of Education matters:

• Jose Martinez and a group of Elementary School Students were recognized for coming to the aid of a student who was choking during lunch. Superintendent Dr. Michael Lindley said students including Shaya Doran, Rowan Castle-Brow, Graham Rogers, Caleb Nofs, and Liam Lugbill got Martinez’s attention and he used the Heimlich maneuver to successfully dislodge a carrot from the pupil’s throat. Denise Churchill publicly thanked everyone involved for helping her son, Chase.

• Lindley said school was called off on Friday, Dec. 9, due to high levels of illness among students, instructors and cafeteria workers along with a shortage of substitute teachers. He added that as of end of day on Dec 12 the number of students not out sick was hovering right around the 75-percent attendance threshold for not counting as a school day. He said a recommendation (not a mandate) that students and staff mask up would be made as of Dec. 13.

• Lindley announced that a ribbon-cutting and open house including tours at the district’s new STEAM Building (located across Clay Street from the Middle/High School) is scheduled to begin at 5 p.m. Tuesday, Dec. 20.

• Lindley thanked Board of Education members Chuck Heit, Heather Black and Joyce Lantz for their service during their final meeting before new members are sworn in next month.