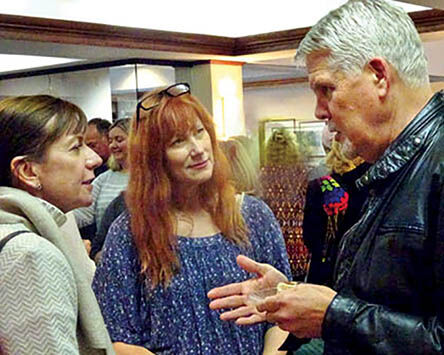 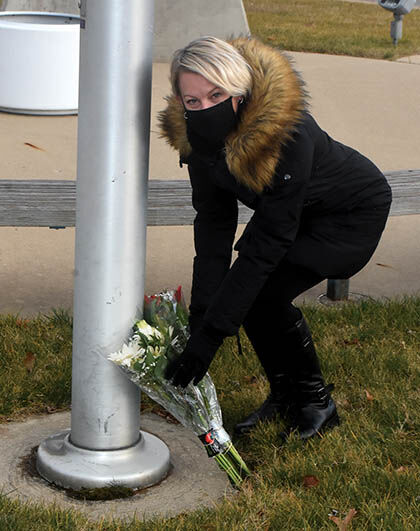 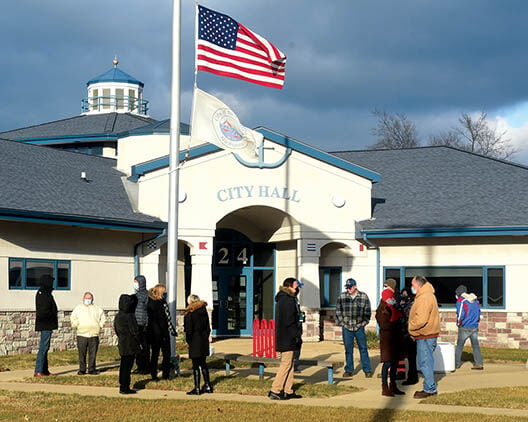 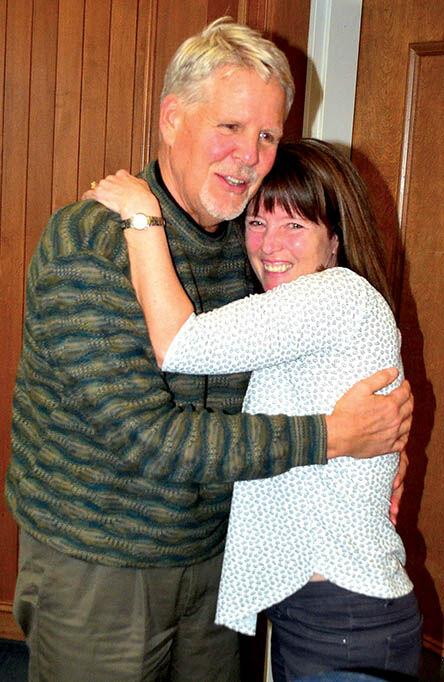 New Buffalo City Manager David Richards and then-Clerk Mary Lynn embrace after an April 12, 2017, special City Council meeting during which he drew praise from council members and an ovation from citizens during his first job review. “David Richards is a great city manager, and he is the real deal, and we're very thrilled to have him here," said council member Liz Ennis.

New Buffalo City Manager David Richards and then-Clerk Mary Lynn embrace after an April 12, 2017, special City Council meeting during which he drew praise from council members and an ovation from citizens during his first job review. “David Richards is a great city manager, and he is the real deal, and we're very thrilled to have him here," said council member Liz Ennis.

NEW BUFFALO — New Buffalo City Manager David Richards, 69, passed away on Saturday, Dec. 12 (to view his obituary go to the Obituaries section of this website).

New Buffalo Mayor John Humphrey posted the following on his Facebook page Dec. 14: With sadness and regret I must announce the untimely passing of our City Manager Dave Richards due to complications from COVID-19 this past weekend.

The City of New Buffalo released the following statement Monday: It is with the heaviest of hearts that we inform you that David Richard, City Manager of the City of New Buffalo has passed away. Our thoughts and prayers are with his family at this time of great sorrow. Mr. Richards served as City Manager since 2017 and had many wonderful successes in his time here. Most notably, bringing the City into a strong financial position which was not the case when he took office, and a brand new downtown. He will be sorely missed because he was a great City leader, friend, and co-worker.

Sincerely, The Council, Management, and Employees of the City of New Buffalo.

The New Buffalo City Council unanimously approved a "city manager employment agreement" with Richards on Dec. 29, 2016. He started the job in January of 2017. A five-year contract with Richards was OK’d by the council on April 18, 2017.

The New Buffalo Police and Fire departments provided an escort of Richards’ “final trip” past City Hall on Monday, Dec. 14, where New Buffalo officials and employees gathered to pay tribute.

“Dave was a great person who did a lot for the city, and he’s going to be missed,” said former City Council member Mark Kroll.

Deputy Clerk Nancy Griffin said Richards was great to work for, noting he was “very generous with his compliments and how much he appreciates you being. His employee and working for the city.”

“He was the city manager who put New Buffalo financially back in place,” Nora Howe noted.

During a Dec. 7 special meeting, the New Buffalo City Council named Police Chief Rich Killips as acting city manager. It was noted during the meeting that Richards was incapacitated due to health issues and in the hospital at the time.

A Dec. 3 post on the city website reported that: Shortly after the November election, four City Hall employees and one DPW employee contracted the virus. This caused a ripple effect with other employees being exposed to their co-workers even though proper precautions were in place. These illnesses caused City Hall to close completely for approximately a week and a half so the required quarantine timelines and a complete cleaning of City Hall could be accomplished … Of the five employees that contracted the illness, four have fully recovered and are back to work. Unfortunately, City Manager, Mr. Richards has become seriously ill from complications of the virus and remains hospitalized to date. Please keep he and his family in your thoughts and prayers.

Humphrey, who was elected to the City Council in the Nov. 3 General Election, wrote in his Dec. 14 Facebook post that he had worked with Richards right up to Thanksgiving “where from his hospital bed he was still more concerned about making sure City business was being properly handled than his own health.”

“In the time of our short friendship I believe that Dave was misunderstood by much of our public, His desire to work with me was not convenient or superficial and I felt it sincere and it came from a newfound excitement and a love of public service,” Humphrey’s post continues. “Nowhere was this more apparent to me than the relationships he forged at City Hall, where he was a beloved co-worker by our administrative staff who are now all grieving.”