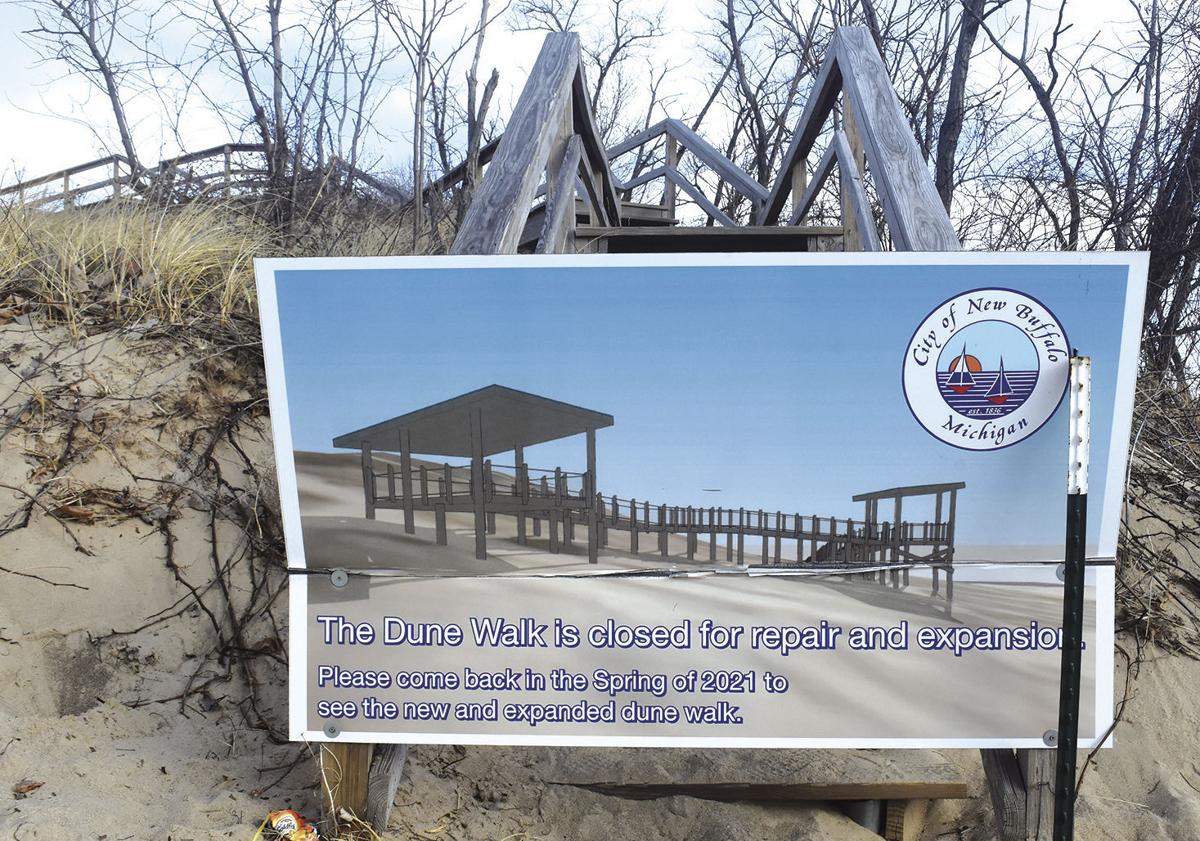 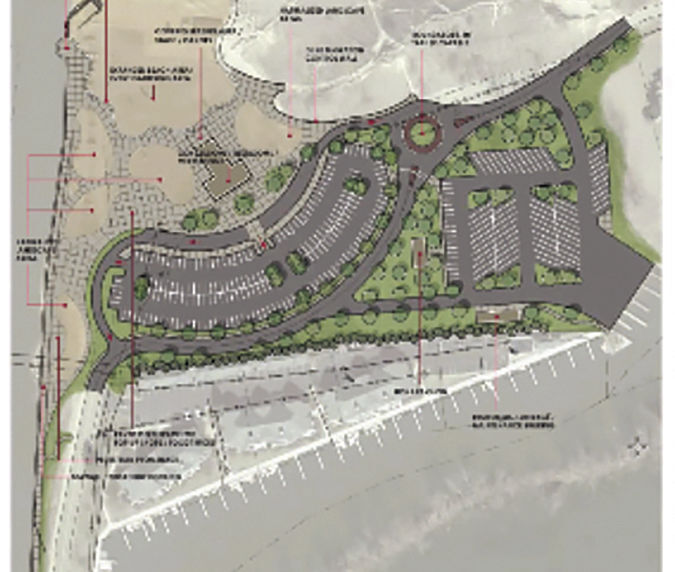 A portion of the Waterfront Master Plan map expected to be presented to the New Buffalo City Council in February.

A portion of the Waterfront Master Plan map expected to be presented to the New Buffalo City Council in February.

NEW BUFFALO — The New Buffalo City Council on Jan. 19 agreed to conduct the search for a new city manager through an “in-house” process.

Council members initially discussed three options for choosing a successor to David Richards, who passed away on Dec. 12, 2020.

One of these was to contract with a professional company to conduct the full hiring process side-by-ide with the city (including all advertising, marketing, and screening of applicants)at an estimated cost of $20,000.

Another option involved signing a contract with a professional company to conduct a limited virtual search including advertising, marketing, and a basic screening at an estimated cost of $7,500 plus advertising (bringing the total to around $8,500). The associated costs of marketing and advertising for the in-house process which ultimately was chosen was estimated to be as much as $3,000.

Council member Mark Robertson said he was in favor of choosing a new city manager in-house.

“I feel the council is very capable to do this … and also one or two of the administrative staff,” he said, adding that more than 30 people applied the last time a city manager search took place.

“We can control the narrative ourselves and who we want to choose,” he said.

Council member Brian Flanagan said he was torn between the limited virtual search and in-house options.

“I’ll put the time in, and if people hate the new city manager the buck stops here brother,” he said.

The vote was 4-0 to conduct the city manager search in-house (council member Lou O’Donnell IV was not at the meeting).

Interim City Manager Rich Killips said the entire search process is anticipated to take about three months and will include putting together a committee of council members and employees (Robertson, Humphrey and Killips were later chosen to be the first three members) to conduct interviews before the full City Council makes the final decision.

Also during the Jan. 19 meeting, council members were updated on the Dunewalk project by Tony McGhee of Abonmarche.

He said the original plan was to build a new handicap-accessible walkway up to the Dunewalk “about mid-dune” and rehabilitate the original dune walk which overlooks the public beach.

“The idea was to use the existing structure … and re-do all the decking because (we could see) that was failing.”

But he said results of a geo-technical report on the Dunewalk revealed that the original structure was not built with the proper footings for the soil conditions, so plans for 2021 have been changed.

McGhee said the handicap-accessible walkway being funded by a Michigan DNR Land Water Conservation Grant will still be built this year, along with a reconstruction of the first half of the existing path atop the dune “because we’re going to have to reconstruct all the structure and re-do all of the decking.”

He said the entire project is already designed so the plan is to re-bid the second section as an alternate for this year to see what the numbers come in at for the overall project.

“And we will put in for another grant this April cycle (to three different state grant programs) to do that next section.”

McGhee said the new plan including installing new footings has raised the overall cost estimate from $440,000 to nearly $800,000.

McGhee said the state state grant should be finalized soon, and bids can be sent once that happens.

The council also got an update on the Waterfront Master Plan from Mike Huber of Abonmarche.

Huber said the project got delayed due to the pandemic and flooding issues at the lakefront, adding that the design plan was presented to a small group of city officials the week prior to the Jan. 18 meeting.

“The key first steps in this are addressing the flood wall area and making sure we can mitigate any of the flooding and high-water damage, and really addressing some of the seawall pieces; And then taking a look at some of the traffic access with a roundabout and the possible relocation of Marquette Drive,” he said.

Huber said an interim step involving flooding/seawall and the traffic access portions of the plan and details of what full completion will involve will be included in a presentation expected to be ready for the February City Council meeting. The overall plan is based on options chosen by members of the public at “Design Charette” sessions held in late 2019 and early 2020.

Interim City Manager Rich Killips noted that the city needs a Waterfront Master Plan to apply for grants to help fund various aspects of the plan.

McGhee said USDA construction money will be potentially available at the end of February for a portion of the plan, with additional grant opportunities offered over the next six months.

Also on Jan. 19, Humphrey said he has been requested to draft a letter to seek engagement of the owners of the “Ciardelli” property (the vacant, unfinished, fenced-off construction site in downtown New Buffalo).

“I think this has gone on far too long,” Flanagan said. “I think that we’re a victim of I don’t know what, but what can we do legally? But we’ll look into that.”

He then made a motion to “draft a letter from us, the City Council, to this property owner, to engage him, to invite him to join us, to find out what his intent is,” he said.

Flanagan said he doesn’t buy the argument that “there’s nothing we can do.”

“We’re a city. One man is not going to control when a city wants to change. We’ve beautified downtown, but we’ve left this empty catastrophe. So I’m making it my destiny … to make something happen down there.”

Humphrey said he thinks it would be helpful to “reach out to him personally and invite him to discuss what his plans are and what can we do to help him.”

Noting that “it’s private property,” Robertson said he understands the potential value of reaching out and trying to set up a line of communication.

There was some discussion about the property posing a safety hazard, with Humphrey stating he knows that kids have climbed into the site and have been “messing around.” Adding that “no one’s gotten hurt.”

The vote was 4-0, with assurances that all council members would have a chance to see the letter before it is sent.

In other Jan. 19 business the New Buffalo City Council:

OK’d a professional services contract with Abonmarche to get the repair project started on the city’s municipal marina, which sustained fire damage last summer from a blaze that started in a faulty bath room exhaust fan. The scope of work (slated be done in time for the 2021 boating season) will include repairing the building to its condition at the time of the fire and adding heat and air conditioning to the restroom areas. Abonmarche staff (at an approximate total cost of $8,850 with “a good portion” of that expected to be reimbursed by the city’s insurance company) will develop performance specifications and solicit bids for the following work within the building: Remove and replace insulation throughout the building; Structurally evaluate roof damage and develop work scope to address; Replace all fans, lights and outlets in the restroom and storage areas of the building; Clean and paint all interior walls within the building; Replace drywall as needed; Add new sinks and countertop areas within the restrooms; Fixture replacement as dictated by City staff; Install air conditioning to service the two restroom areas.

Approved a painting project and replacement of a worn out part for the Water Department. Water Department Superintendent Ken Anderson said a 300,000 gallon ground storage tank at the treatment plant that went online in 1970 is due to be painted. Dixon Engineering recommended accepting the lowest bid (out of eight received) submitted by L&T Painting of Shelby Township Michigan for $151,800. The council also approved the purchase of a Water Department control head to replace a unit which has failed due to old age. The cost of the replacement control board with programming is $6,954.

OK’d a three-year contract with Gabridge and Company PC for audit services at an approximate yearly cost of $14,600. Killips said that over the last three years, Gabridge and Company has completed the city’s annual audit, doing an exceptionally thorough job while being easy to work with at a reasonable price.

The council approved what was called the Edwards family settlement. Killips said “Months ago, the City filed a property claim with its insurer, Michigan Municipal League regarding the flooding of the lower level of a residence on Michigan Street. It was found that a city storm drain was inappropriately draining into a private drain system and when there was a failure last spring, it caused a private residence to be flooded. The City’s insurance company is in the process of finalizing the claim with the homeowner which will cover the repairs to the drain and hold the city harmless moving forward. We have engaged the city engineers (Abonmarche) to come up with the proper fix to this historic problem so it will be fixed once and for all.” McGhee said there are three options to fix the situation.

Were provided with Lt. Jason Grimmet’s police report, which included the following “complaint of interest” involving a recovered stolen vehicle: “Officer Hockenhull conducted a traffic stop on a vehicle that was stolen out of Corunna Michigan, which is Northeast of Lansing. The driver was lodged at the Berrien County Jail for numerous reasons.”

Re-appointed Jack Kennedy, Vanessa Thun and Julie Westergren to the Board of Review.