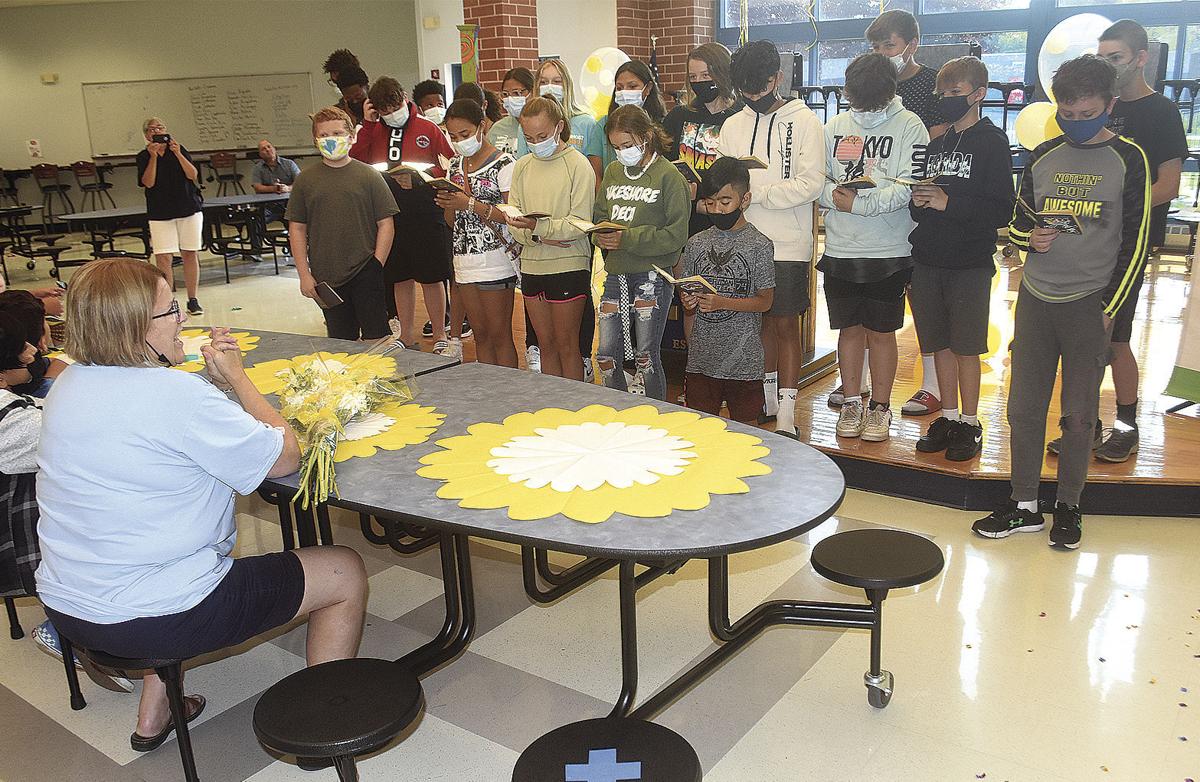 Becky Hartley enjoys a performance of “Don’t Give Up On Me” by middle school pupils. 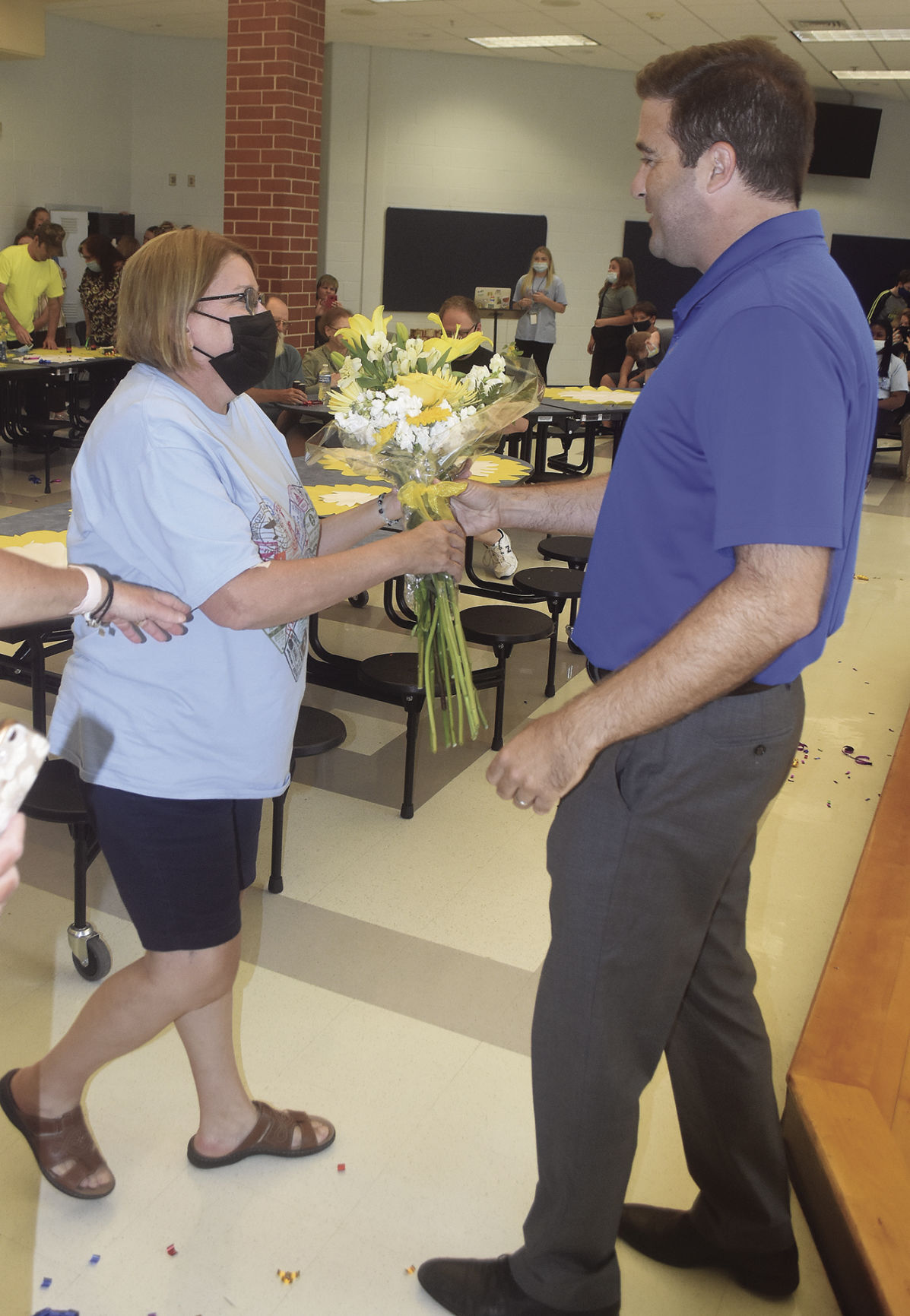 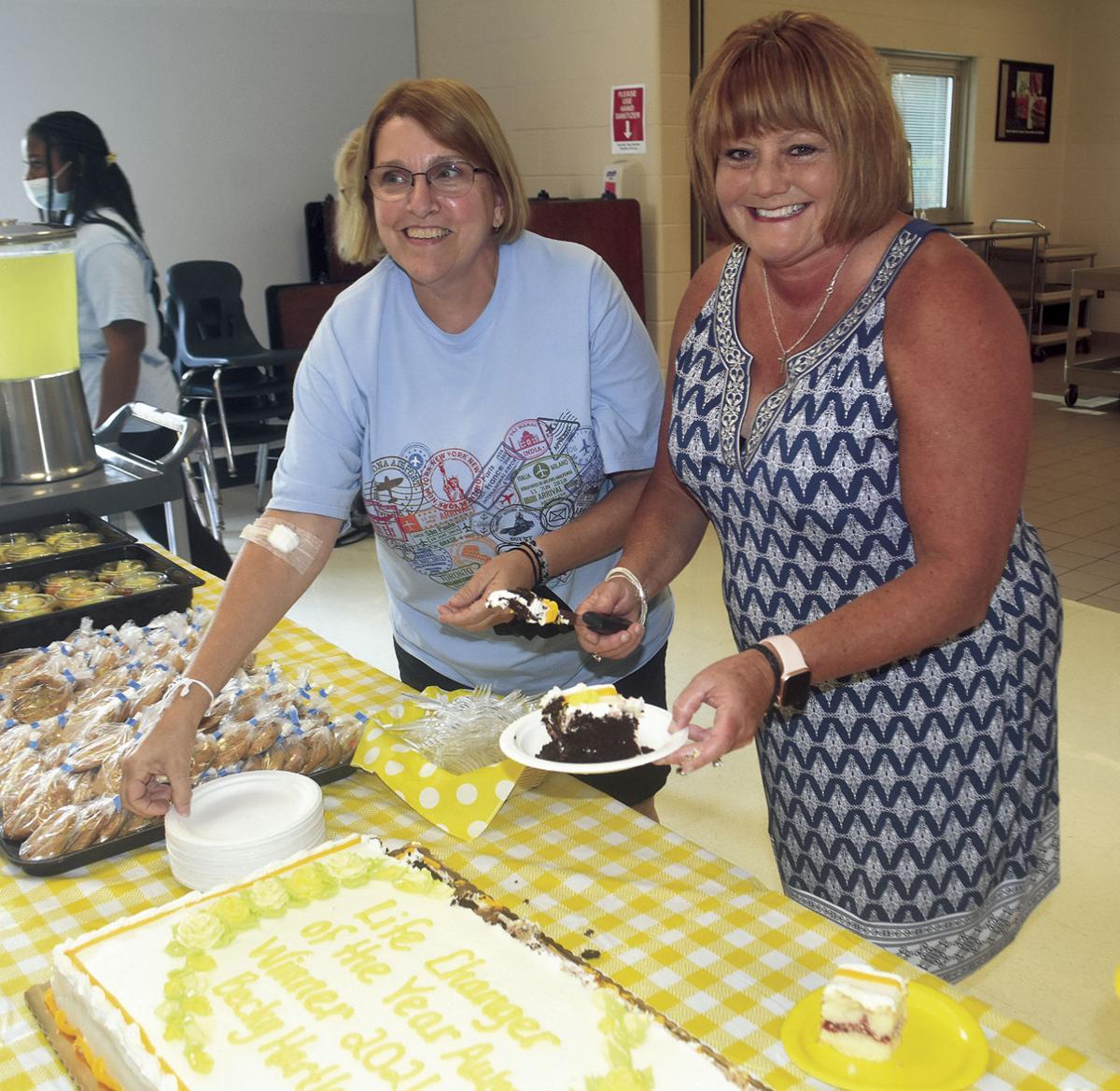 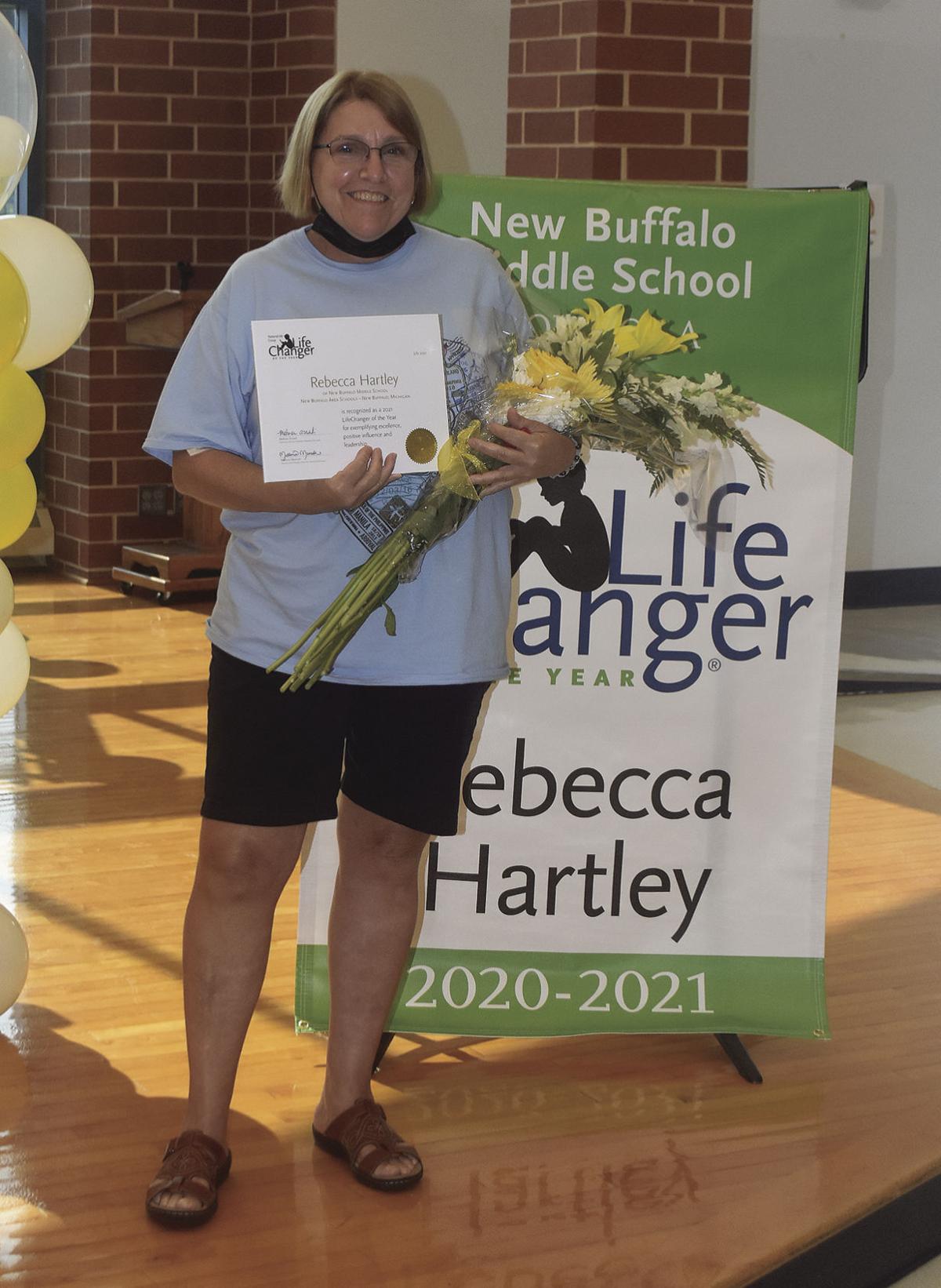 Becky Hartley enjoys a performance of “Don’t Give Up On Me” by middle school pupils.

NEW BUFFALO — New Buffalo Middle School teacher Rebecca Hartley was described as “the kindest person I know” and someone who is “able to make impossible tasks look easy” during a Tuesday, July 20, assembly held to celebrate her selection as one of 15 National Life Life Changer of the Year award winners.

Hartley, a math teacher who also leads the Middle School Yearbook effort, said she was expecting a regular summer school lunch, not the surprise party in the cafeteria.

“I was shocked – they are all good secret keepers around here because I talked to everybody and no one said anything,” she said. “I’m just lucky. I work at a great place, I’ve got a great staff, this is a blessing. And I’m so excited because the money – it’s going toward Project Pride, its going toward our yearbook.”

The celebration had a musical flair as Hartley entered the cafeteria to cheers and a rain of confetti while “Build me Up Buttercup” played.

Later a group of middle school students serenaded her with “Don’t Give Up On Me.”

“We seek to recognize and reward the very best on K through 12 education across the country,” said Jay Dunlap of National Life Group.”What we’re looking for are individuals who exemplify excellence, have a positive influence for their school and their local community, and demonstrate leadership, and you have a lot of those qualities and more.”

He said Hartley’s work over 43 years in the New Buffalo district “has had a ripple effect throughout this community, and we’re all here today to say thank you for being an endless support of inspiration for your colleagues, your students, and a role model for so many.”

“It’s hard to know where to begin when it comes to talking about all the initiatives and programs you’ve been part of here in New Buffalo, from Project Pride, to Students Against Destructive Decisions, to many acts of simple kindness, you’re leading the way in instilling those essential values of kindness, integrity and respect.”

Dunlap said when NBMS colleague Lisa Knoll nominated Hartley award she told them “Becky’s like a breath of fresh air when times get tough. She makes you feel loved and valued for who you are as a person. And you know that you can count on her to be there for you in any situation.”

Dunlap said more than 150 people made similar comments once Hartley had been nominated, giving one example where a student said “Miss Hartley is the G.O.A.T. (greatest of all time). She’s the teacher you can go to when you need someone to talk to, when you’re struggling with something, when you need help or just to say hi.”

He said Knoll shared the following: “I’m convinced Becky Hartley does not sleep. I’ve done quite a bit of brainstorming I’m able to conclude that not sleeping is the only possible way in which this woman can accomplish everything that she does.”

Teacher Jennifer Bauer said Hartley (who has been a colleague of Hartley’s for 32 years) helped her understand what a good teacher does when she helped a lost boy get some food and find his way during a school-wide gathering.

“She is bold, but bad in a good way,” Ditto said, adding that Hartley also has lots of energy, is creative, kind and youthful (attributes that spell Becky).

“I am honored to call you my friend.”

New Buffalo Middle School Principal Bradley Brunner said every teacher goes into the profession with goals that include wanting to change lives, adding “and Becky you’ve done it, you’ve done it!”

Board of Education member Frank Magro recalled that Hartley never gave up on the Project Pride program after it nearly lost its funding.

“It wasn’t just a program, it was part of who Becky Hartley is,” he said.

Hartley’s children, Autumn and Bryce, also spoke during the event, with her daughter saying Becky puts a lot of effort into making sure her students succeed and have fun.

Bryce said “If you Google what a teacher is, you’re most likely to see her name pop up.”