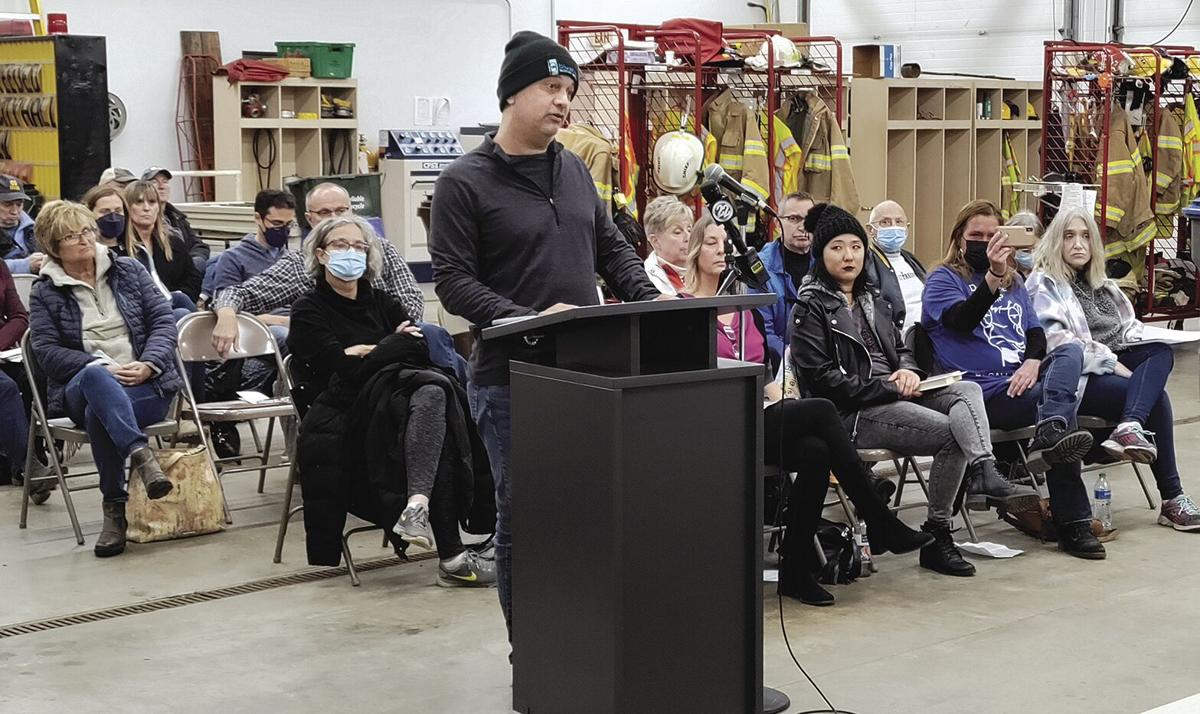 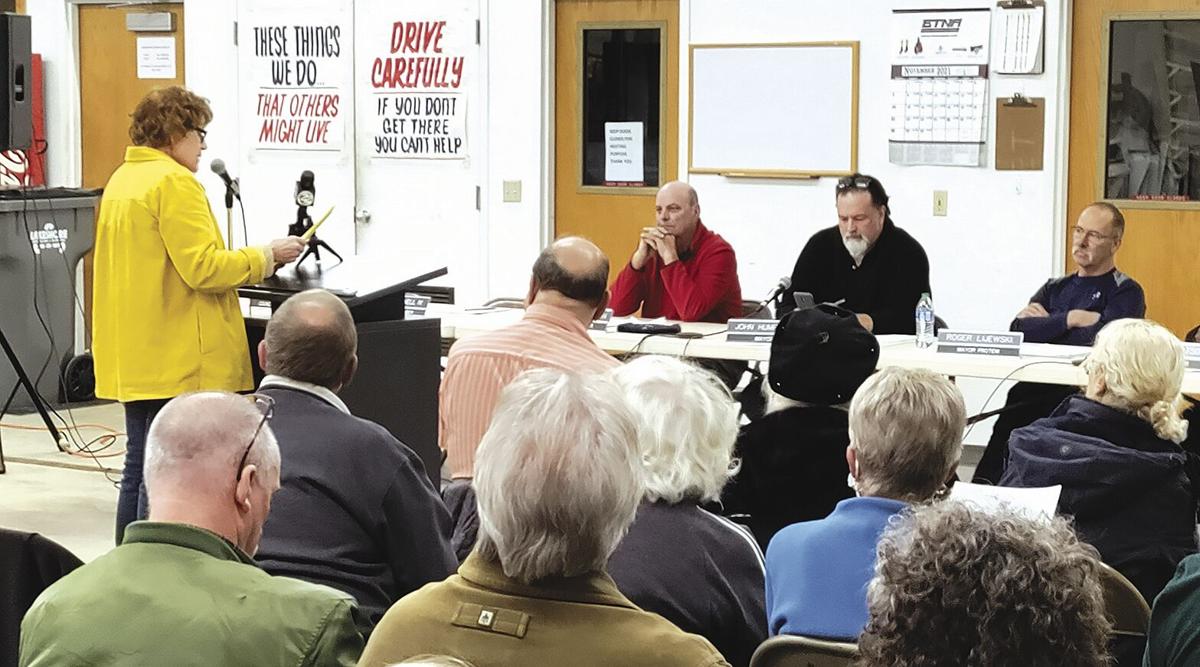 A view of the public hearing portion of the Nov. 23 New Buffalo City Council special meeting.

A view of the public hearing portion of the Nov. 23 New Buffalo City Council special meeting.

According to New Buffalo City Manager Darwin Watson, provisions of the zoning ordinance amendment given final approval on Nov. 23 include:

1. Provide that short-term rental activity is generally allowed in single-family and other dwelling units, subject to the regulations contained in the City Code.

3. Provide that new short-term rentals would continue to be allowed in all other zoning districts that contain dwelling units.

The Nov. 23 special session was held in a city fire station to accommodate those wishing to comment on the issue, and the culmination of a tumultuous two-year process did not go quietly.

Nearly 20 people spoke during the hour-long public hearing on the Zoning Ordinance Amendment, and while many criticized the city’s new rules, there also were voices in favor of restricting short-term rentals (STRs) in the city. People espousing both views had cheering sections in the full-firehouse audience.

The first of those speakers, Diane Gajos, asked the City Council to reconsider approving the ordinance amendment, and noted that many have spoke in favor of allowing new permits for short-term rentals in New Buffalo at a series of city meetings (a moratorium on city-issued licenses in effect since May 2020 is slated to expire Dec. 13, but only for non-residentially zoned areas).

“The people in favor of short-term rentals are taxpayers whose ideas and needs have been ignored,” Gajos said, adding that she looks at the people around her and sees community.

“This whole short-term rental battle has made New Buffalo an even stronger, more cohesive community.”

But William McCollum lamented the “loss of my community as the result of all these revolving doors and revolving tenants.”

“We don’t have a sense of community, we have nothing in common with these people and they don’t respect what we do,” he said.

McCollum also expressed his opposition to more short-term rentals in R-1 areas of the city.

Jason Milovich said he came in knowing the council would pass the new short-term rental rules during the Nov. 23 meeting, adding he’s holding out hope that a different governmental authority will make it a “moot point.

“My only hope is that this bill (Michigan House Bill) 4722, comes to fruition … So keep hope alive for that.”

Milovich said New Buffalo’s economy has been “tourist-driven” for over a century, and vacation rentals “are the conduit from which this flows.”

“This proposed ordinance I believe will drive a stake through the heart of this economy, decrease property values, and send tourists elsewhere.”

Other public comments on the city’s new short-term rental rules ranged from Adam Tynowski questioning the validity of arguments against STRs that he said don’t make sense such as “that somehow a tourist town is going to be better off with fewer tourists” (one of the evening’s bigger applause lines); to zoning ordinance amendment supporter Ron Watson saying, “I retired here from Naperville a while back, and I was looking for peace and quiet. Fifteen years ago I had it. I don’t have it today. The noise coming from the swimming pools around the houses next to me during the summer … is really bad.”

Following the public hearing, New Buffalo Mayor John Humphrey spoke on “what it is and what it isn’t” in regard to the zoning ordinance amendment that was ultimately approved 3-0 by himself, Roger Lijewski and Brian Flanagan during the Nov. 23 meeting. Council members Lou O’Donnell IV and Mark Robertson were absent (it was noted that Robertson was recovering from a medical procedure).

“What this ordinance does is move this town forward to regulate the number of rentals, and gives equity to the people that live here and businesses … that you won’t be dealing with an unfathomable amount of people,” he said.

“This is not about trying to punish second homeowners or people from Chicago, it’s about keeping this town viable moving forward.”

Regarding the passed State House STR bill and its pending counterpart in the Michigan Senate, Humphrey said more than 20 community leaders in three counties have united to oppose the state short-term rental bills that would be “utterly destructive.”

He said the city is currently struggling with 200 rentals, 150 of them with city licenses and an estimated 50 operating illegally (down from a high of 150). If the proposed state rules were to take effect, Humphrey said there could be 750 short-term rental units on New Buffalo, bringing as many as 7,500 people in.

He also noted that the city is down to about 1,000 voters.

He said the city made mistakes in the past and was issuing STR permits “for something that was never declared a lawful use.”

Although Humphrey said he couldn’t make any specific promises, he said a rezoning process that recently got under way in the city could include deferring to homeowners associations in R-2 and R-3 districts when it comes to short-term rentals.

In a statement from Watson included in the special meeting packet, he noted that since the moratorium on new short-term rentals licenses was instituted in May of 2020, the city has made strides in allowing for the operation and regulation of STRs by adopting revisions to its regulatory ordinance, creating a department to handle the administration of rentals, and secured a consultant to review and updating the zoning ordinance.

Others expressing their opinions during the public hearing (made possible after 13 residents filed certified letters asking for a third public hearing on the issue) included:

• Dan Skoczylas said the City Council must “accept responsibility” for the negative effects he predicted, including “When all this council is ever remembered for is misallocation of city resources and fighting non-stop legal action because of your missteps, and the cost to the taxpayers as a result.”

• Laura Murray asked the City Council not to vote on Nov. 23 because there is pending litigation against the city; also pending legislation in the Michigan Senate that “would make this point moot” is becomes law; and because such an important decision should be made with all 5 council members present. She also suggested having a referendum on the STR issue.

• Ryan Nofziger said she thinks enforcement would address the majority of issues, and asked the council to “step back and look at this.”

• Gerrick Eruinius said problems in the city such as parking and how long it takes to get a pizza have been blamed on short-term rentals. “If anyone in Lansing is listening tonight, please help people restore their property rights because that’s what good governments do.”

• Betty Bernacchi said the jobs that are here today exist because Michigan reinvented itself and promoted tourism that is largely supported by second homeowners and vacation renters. “The number of long-time residences and the population of the city has been decreasing for decades.”

• Debbie Callahan said she feels there has to be a cap on short-term rentals in New Buffalo. “At some point we all have to come to an agreement, and we have to be happy with it and live with it.”

• Jim Kramer (owner of Nancy’s on Whittaker) said he doesn’t see anyone who’s going to benefit from the ordinance amendment. “It surely will not help our businesses downtown,” he added, later calling the move “a public relations nightmare.”

• Daniel Hatch said “The zoning ordinance before you is both untruthful and unlawful.” “Are you really comfortable adopting a zoning ordinance that is based on a complete lack of empirical data and false pretenses?”

• Susan Traeger said she is tormented by rental after rental every weekend, “and there is no respect whatsoever.”

The possibility of marijuana businesses being allowed to operate in the city also came up during the Nov. 23 special meeting.

During a public comment session, Susan Traeger said she received a postcard from the city “asking simply check yes or no regarding a marijuana dispensary” and asked for more details on the issue.

Humphrey said there are currently no officially proposed locations for a dispensary. He said if the city decides to opt in under state rules, the process would begin with the Planning Commission taking input from the public before planners “define what that use is and where they could exist.”

He also said the decision of how many such businesses would be allowed in 2.2 square miles would need to be made.

Humphrey said any companies currently trying to pave the way for a marijuana business in the city are doing so “strictly on their own hope that they … will get a license.”

“None of this is remotely even close to being an actuality right now. We need to understand the public’s temperature on this right now,” he said, noting that the city’s voters supported the state-wide vote on recreational marijuana by basically a 60-40 margin.

In other Nov. 23 business, the City Council:

• Agreed to rezone a home at 6 South Willard St. (at the corner with Buffalo Street) from General Commercial District to R-1 single-family. Property owner Tricia Bowden said in 2013 the city changed the zoning of the home to General Commercial District (as far as she knows unknown to her family). She is the fourth consecutive generation to live there (since it was built in 1926). She said the zoning discrepancy discovered when applying for a loan, added that the zoning affected homeowners insurance as well.

• OK’d approved a site plan for the existing building at 1 North Whittaker St. (which currently is home to a pharmacy but otherwise vacant) which calls for it to be renovated for several future tenants including a restaurant. An earlier site plan included moving some exterior walls for an expanded outdoor seating area partially on city property, but the new proposal keeps the perimeter of the structure where it is while adding a series of windows.

• Endorsed and supported an environmental and engineering study for a rail connection in New Buffalo that would link the Pere Marquette and the Wolverine/Blue Water services via a rail connection connecting CSX tracks to Amtrak tracks which would allow Pere Marquette trains to operate on Amtrak-owned 110 mph service tracks between New Buffalo, and Porter, Indiana, where the service would continue on to Chicago.