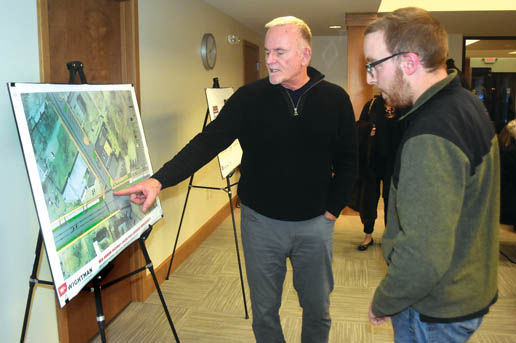 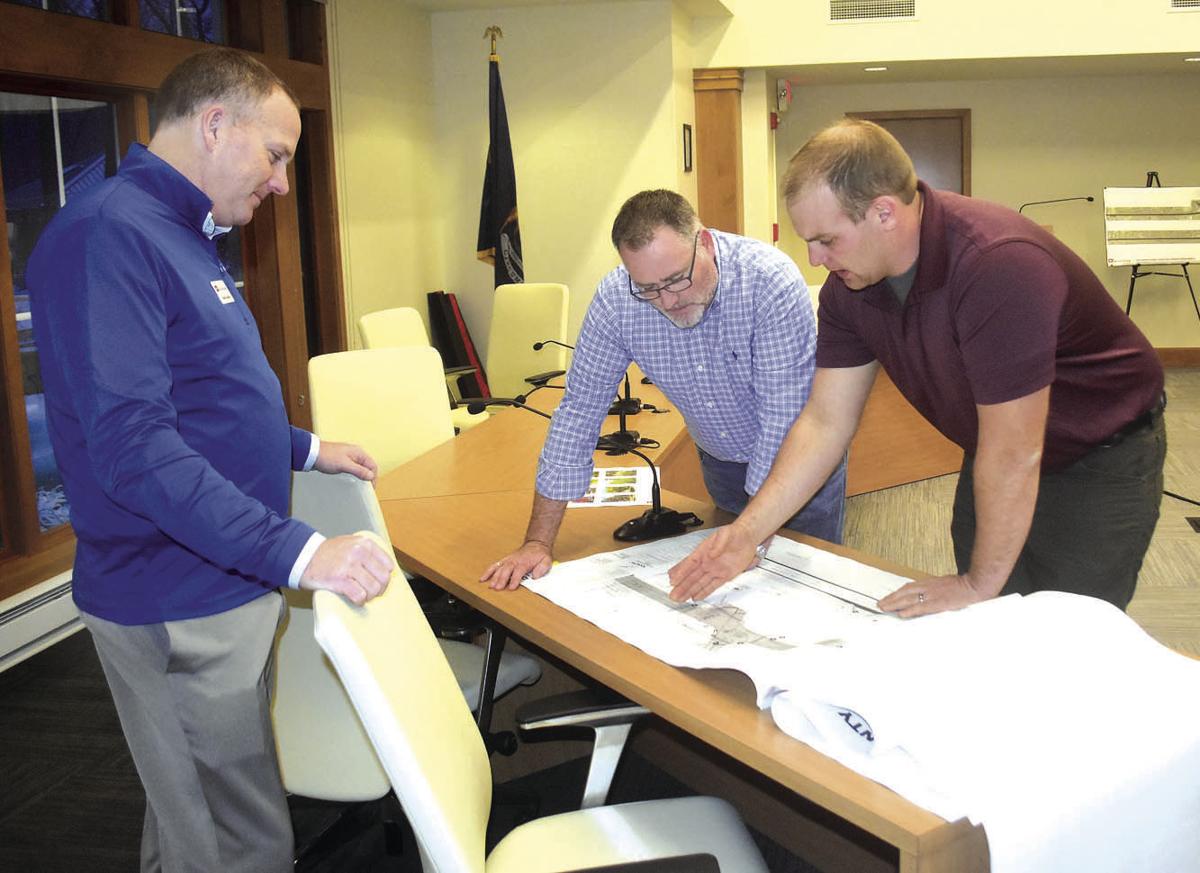 teve Carlisle, Jason Latham and Kevin Stack (from left) review a map prior to a presentation on the Red Arrow Highway Union Pier Corridor Improvements Project on Feb. 12 in New Buffalo Township Hall. 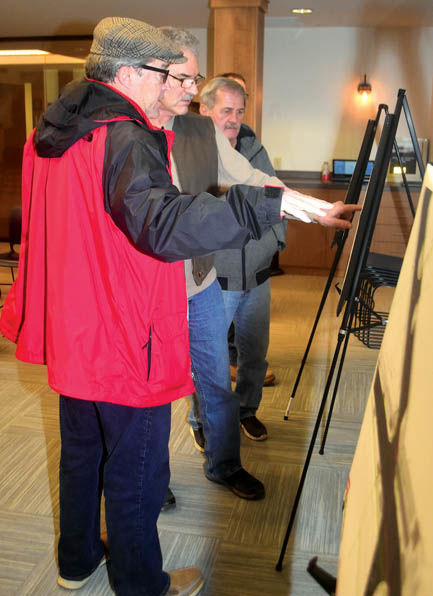 John Hoekstra, Mike Shuler and Terry Novacek (from left) explore some of the maps showing features of the upcoming road project in Union Pier. 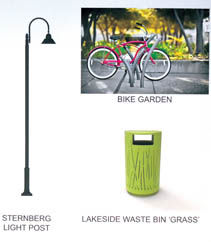 teve Carlisle, Jason Latham and Kevin Stack (from left) review a map prior to a presentation on the Red Arrow Highway Union Pier Corridor Improvements Project on Feb. 12 in New Buffalo Township Hall.

John Hoekstra, Mike Shuler and Terry Novacek (from left) explore some of the maps showing features of the upcoming road project in Union Pier.

NEW BUFFALO — Starting in the spring of 2020, big changes are coming to the intersection of Red Arrow Highway and Town Line Avenue/Union Pier Road along with surrounding areas in Union Pier.

The Berrien County Road Department held a Feb. 12 Public Information Session at New Buffalo Township Hall on the Red Arrow Highway Union Pier Corridor Improvements Project, slated to begin in the spring of 2020 that will yield a new streetscape in downtown Union Pier, a three-lane “road diet” set-up on Red Arrow Highway, the first section of a proposed linear park style non-motorized pathway and much more.

New Buffalo Township Supervisor Michelle Heit said she was excited to see so many people turn out for the Feb. 13 meeting (approximately 100) on a snowy night.

“Thank you for all your output over the last almost two years that we’ve been … planning this project,” she said. “We’ve really listened to you, I know safety was your main concern.”

Justin Moss, whose family has an architectural design business (Moss Design) near the Union Pier Post Office along Red Arrow Highway, said the area really needs to be upgraded.

“I love it, I think it’s going to be great,” he said of the plan presented Feb. 13. “It’s going to be a wonderful addition to the community — the layout is fantastic.”

Kevin Stack, an Engineering Supervisor with the Road Department, said the project will stretch from Berrien Street to Community Hall Road and on Town Line Avenue/Union Pier Road from the railroad tracks west through the “downtown” area.

“It’s not a simple road project,” he noted.

Most aspects of the overall project were originally planned to take place a few years from now, but doing them at the same time was seen as the right move, especially since the GRSD portion requires so much major excavation.

“If we didn’t do this we’d be torn up for three or four years,” said Chikaming Township Supervisor David Bunte.

Stack said a big component of the project (the first part of construction and “probably bigger than the road project”) involves the Galien River Sanitary District putting in new 48-inch lines (20 feet deep) along Red Arrow Highway and also install new pipes and manholes in the downtown Union Pier area.

Mark Prein of the engineering firm Prein&Newhof said the Galien River Sanitary District portion of the project is designed to reconstruct the trunkline from Union Pier to the north on the east side of Red Arrow Highway to Berrien Street (which helps carry wastewater from the north side of the township  south to the GRSD treatment plant). He noted that the current sewer line is undersized.

The GRSD portion of the project also involves rebuilding piping at the Town Line-Red Arrow intersection — a move designed to increase capacity and address overflow issues.

The GRSD work is slated to begin in early spring (March or early April).

Stack said there will be lane shutdowns on Red Arrow for the GRSD project, although at least one lane of traffic each way will be maintained.

But the sewer project at the Red Arrow Highway-Town Line Avenue/Union Pier Road intersection (where the project will begin) is a different story.

“That intersection will be shut down … for about a four- to five-week period to get that Sanitary sewer in place,” Stack said. “The absolute goal is to have that road back open to traffic by Memorial Day.”

Once the GRSD project is done downtown, Stack said Town Line heading from the lake toward Red Arrow Highway will be open to one-way traffic only, and there will be no parking along that portion of the road while the road project continues.

Stack said a new parking area being acquired by New Buffalo Township in what was described as “the RSVP lot” near the downtown area on the south side of Town Line Avenue will be available for those looking to visit the downtown area.

As the Red Arrow section of the sewer project moves along, Stack said the road project will start kicking into gear.

Once they have reached Berrien Street (working on two lanes while the other two are open to traffic), Stack said road work will flip back the other direction and make its way back toward Community Hall Road.

The timeline for the road project begins after July 4 (so as not to impact the Memorial Day and Fourth of July weekends, although work will go on around Labor Day).

Stack said the goal is to have all of the asphalt in place by the end of the year including curb and gutter, storm sewer and other underground work.

Stack said weather will be a factor in reaching that goal.

“When we come back in the spring of 2021 we may have to do some concrete work, we’ll have to the plantings, maybe do non-motorized path … painting the final course of lines,” he said.

By Memorial Day 2021, Stack said there will hopefully be a ribbon-cutting ceremony.

Stack noted that the Union Pier streetscape elements which include decorative concrete, planters, trees and plantings, benches, light poles, sidewalks, curbs and gutters (one of the displays presented at the meeting showed examples) is a major part of the project that Wightman and the townships collaborated on with input from the public. He also showed examples of finished streetscapes in Bridgman, Dowagiac and Sturgis.

He said a major focus of planning for the design of the project was how to get pedestrians across the road safely at the Town Line/Union Pier-Red Arrow intersection — especially in light of the growing community, large numbers of summer tourists, and density of businesses.

“We made sure we got out there and saw what it was like during the summer,” Stack said.

Another slide that was part of the Feb. 12 presentation showed an example of a three-lane roadway in St. Joseph similar to what the portions of Red Arrow Highway outside of the downtown Union Pier area will resemble.

“This will be a path to help connect that community out there. So from Berrien Street to Community Hall, Lakeshore Drive, Town Line … this will be a way to travel from Point A to Point B safely,” he said. “Traffic will not be right on top of you … It will be about a 10- to 14-foot gap depending on where you are.”

Stack said there also are two big drains in the area — the Union Pier Drain and the Street Drain — and ways to “fix the water issues” related to these drains had to be part of the plan.

The Township Hall meeting room was ringed with storyboards illustrating various aspects of the project and representatives of the Road Department, Wightman and Associates, the two local townships and Prein&Newhof were on hand to answer questions before and after Stack’s presentation.

Stack said the task of rebuilding Red Arrow Highway from Bridgman to New Buffalo has been a major focus of the Road Department for the past five years, and the project is being handled “segment by segment” (with the portion between Bridgman and Sawyer now completed).

In the case of Union Pier, (which Stack said is a growing area), he said Town Line Road was in such bad shape before a recent resurfacing that he called it a “war zone.” He also said the Road Department has received a “nice stack” of letters regarding the intersection.

He praised the coordination between the two townships in helping make the project move forward.

“That’s very rare … We have 22 townships, and it’s hard to get them all to work together sometimes.”

Heit thanked Wightman and Associates for working with property and business owners, and the Road Department “because this really wouldn’t be happening if we weren’t able to tag on to your project.”

She said support from The Pokagon Fund also made the project possible.

“It’s been a wonderful partnership The Pokagon Fund, the townships and everybody to just make one big project while everything’s torn up.”

John Krsul of The Pokagon Fund said the Fund contributed a total of $1,050,000 to the project.

“We have particularly funded the purchase of some land that can be used for a trailhead and more parking and then to the major project $850,000 … mostly put toward the above-ground improvements, the equipment, the benches, the tables, landscaping.”

Krsul said the experiment to see how the three-lane road diet works in this area and the start of a possible linear parkway along Red Arrow that could stretch from Bridgman to New Buffalo is exciting.

“It’s just going to make that whole area safer because that was really the main concern with Union Pier,” he said.

Bunte said the the Red Arrow Highway Union Pier Corridor Improvements Project is “something we should all be really, really proud of” which he said will make “major improvements” to Union Pier, represents both an economic shot in the arm and an improvement to safety in the area.

“I can’t say we’re going to solve all the accidents because people are people, however we’re going to make it as safe as we can with the rules we have to go by and the restrictions we have,” he said.

Stack said Wightman and Associates have created a website (https://gowightman.com/project-updates/red-arrow-highway-union-pier-corridor-improvements-project) specifically to provide updates, meeting dates, plans and other information on the Union Pier project.

He said the Road Department and Wightman websites and Facebook pages and township web pages also will post information on the project.