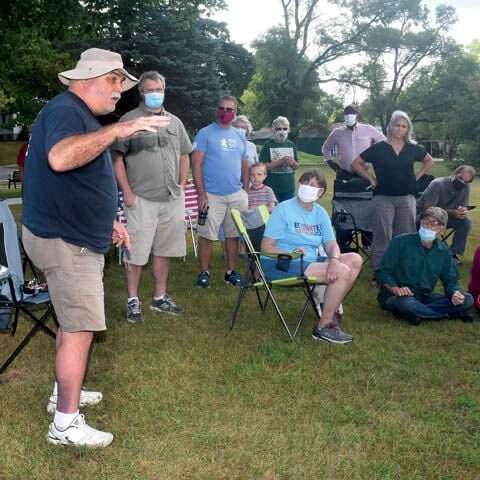 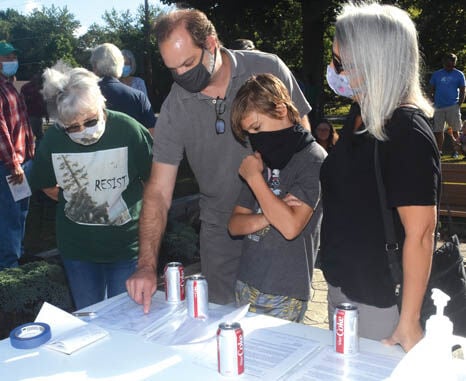 Checking out a map of the trail between the New Troy Community Center and the local cemetery. 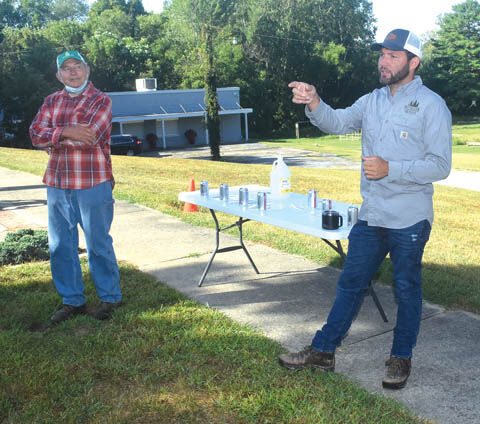 Brett Kuipers (right) speaks during the Aug. 29 hearing in New Troy while Robert Warmbein looks on.

Checking out a map of the trail between the New Troy Community Center and the local cemetery.

Brett Kuipers (right) speaks during the Aug. 29 hearing in New Troy while Robert Warmbein looks on.

NEW TROY — A proposed expansion of the New Troy Cemetery and the possibility of logging on nearby Weesaw Township-owned land brought nearly 50 people to an outdoor hearing on Saturday, Aug. 29.

Members of the public expressed concerns about many large trees along a trail that goes from behind the New Troy Community Center to an area below the cemetery that have already been marked with paint — apparently for cutting.

The issue of expanding the cemetery by clearing a 3 to 4 acre parcel also drew questions about the cost, need and other issues.

Township Supervisor Gary Sommers and Weesaw Board trustee Robert Warmbein talked about the situation as it currently stands and took comments outside near the New Troy Community Center, while Brett Kuipers, a consulting forester with Michigan Forestry Co., presented an overview of the township’s options.

When asked about the large trees marked with paint (later said to total 160), Kuipers explained that he was brought in “after it was marked by two or three different sawmills,” adding that they were “just marking what they want.”

Kuiper initially said, based on what township officials had said were their main goals, that he would propose doing “a light timber sale harvest on a single-tree selection … take some trees in poor form, ones that are at maturity. I liken it to weeding the garden.”

He also said as a consultant he would want to focus on getting the best value for the township by taking the trees to market from the cemetery expansion site and possibly other areas and seeking bids for them while they’re still in the ground.

There were several members of the public who stated their opposition to logging in the woods along the trail, a sentiment that appeared to have widespread support in the audience.

“This land is for animals … there are natural trails there already,” one attendee said.

At one point Kuipers said that if the township wants to allow trees to fall and make “an old-growth forest” that’s fine with him.

“We can’t go forward with this if everybody’s not on the same page and the township hasn’t voted on what they want to do,” Kuipers said. “All the questions that are going on here need to be talked about at the township.”

Warmbein said the cemetery is filling up and township officials are looking at expanding it.

Sommers said it’s hard to predict how fast the cemetery is going to fill up.

Sommers and Warmbein both said the numbers and other details about the cemetery expansion are still being determined.

They were told by an audience member “we need to see that (plans) in writing.”

It was noted that the township’s Glendora Cemetery (on Cleveland Avenue) has “lots of room” left and a structure for cremains is being eyed for the expansion area (which was said to be separated from the current cemetery by a “wide driveway”).

Some members of the public suggested that people could go to other cemeteries or that the township find another property that is already cleared.

Ryan Postema pointed out that even “scrub” areas (which the area being eyed for expansion was described as) have value for wildlife.

Sommers said one of the reasons the township acquired 28 acres of land between the Community Center and the cemetery (reportedly for $1,200 in back taxes) was to have a place for cemetery expansion.

“There was a flat area, about three to four acres, that is suitable for a cemetery. That would need to be clearcut and all the stumps removed,” he said. “The other area out there, we’ve said that it’s for parks and recreation.”

Sommers soon added that some trees may remain in the cemetery area if they “fit into the scheme of the plotting.”

Sommers said some of the large, old trees in the current New Troy Cemetery have fallen causing expenses of about $3,000 per tree.

Mike Metz (a member of the township’s Planning Commission who said he’s lived across the street from the property in question for about 65 years) said he remembers running around the wooded area (now owned by the township) in a ravine when he was a kid.

He said the flat area where the cemetery expansion is proposed, an old orchard, was a grass field in those days and the trees there today are not nearly old-growth. Further down in the ravine, however, he said there are large, old trees that he would guess are more than 100 years old.

“If that’s going to be a natural trail … if a tree falls over, it rots and it creates other life,” he said, later adding that clearing trees out of the area would change it.

Terry Hanover, a sixth-generation Weesaw Township resident, said he recently walked the trail through the woods, touching some of the trees “that you can’t reach around.”

“When you draw that line in the soil for that cemetery if there is to be one, you make sure you let us know as a resident just what you plan on doing,” he said.

Metz also said there is a trust fund set aside just for cemetery capital expenditures that he thinks would cover the cost of expansion so it wouldn’t cost taxpayers anything.

Kuipers said he feels the hearing has put the issues being considered by township officials “back to square one.”

As for the cemetery he said “do we clear the while thing, leave scattered trees or not do it at all?”

Sommers stressed that Township Board members are looking for ideas they can work with before making any decisions.

Audience member Lorraine Hanover, suggested forming a committee to help decide what to do going forward.