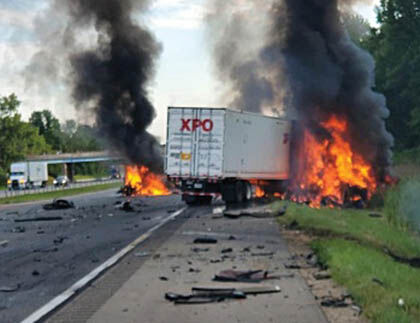 A scene from the Thursday, Aug. 5, three-vehicle crash on Interstate 94 near Bridgman that left one person dead. 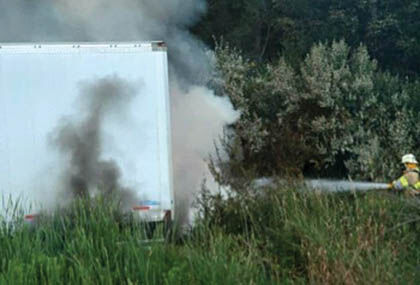 Putting out a fire at the accident scene.

A scene from the Thursday, Aug. 5, three-vehicle crash on Interstate 94 near Bridgman that left one person dead.

Putting out a fire at the accident scene.

BRIDGMAN — One person died in a fiery Aug. 5 crash on I-94 involving two semi tractor-trailers and a sport utility vehicle.

Baroda-Lake Township Police Chief Shawn Martin said the driv­er of the SUV, Edward Wilson, 48, from Tinley Park, Ill., was dead at the scene after his vehicle was hit by two semis, and after all three ve­hicles burst into flames. Both semi drivers were taken by Medic 1 to Lakeland Medical Center, St. Jo­seph, where they were treated and released, Martin said.  It happened at 7:21 p.m. Aug. 5 between Sawyer and Bridgman, and westbound I-94 was closed for hours while crews worked the scene.

Martin said a semi on eastbound I-94 driven by Denis Abing, 62, from Lancaster, Wis., ran off the road, through the cable barrier and across the median, hitting the west­bound SUV. Another semi, driven westbound by Marcin Misiaszek, 49, of Chicago, also hit the SUV and all three vehicles were on fire when rescue crews arrived.

Martin said the eastbound semi had an empty trailer and the west­bound semi was hauling a load of water heaters.

The Berrien County Accident Reconstruction Unit is helping with the investigation.

Martin said one lane of westbound I-94 was re-opened at 12:30 a.m. Thursday and the interstate was completely open by 2:30 a.m.

Martin said investigators still do not know why the eastbound semi went off the road, but at this point they do not believe drugs or alcohol were a factor.