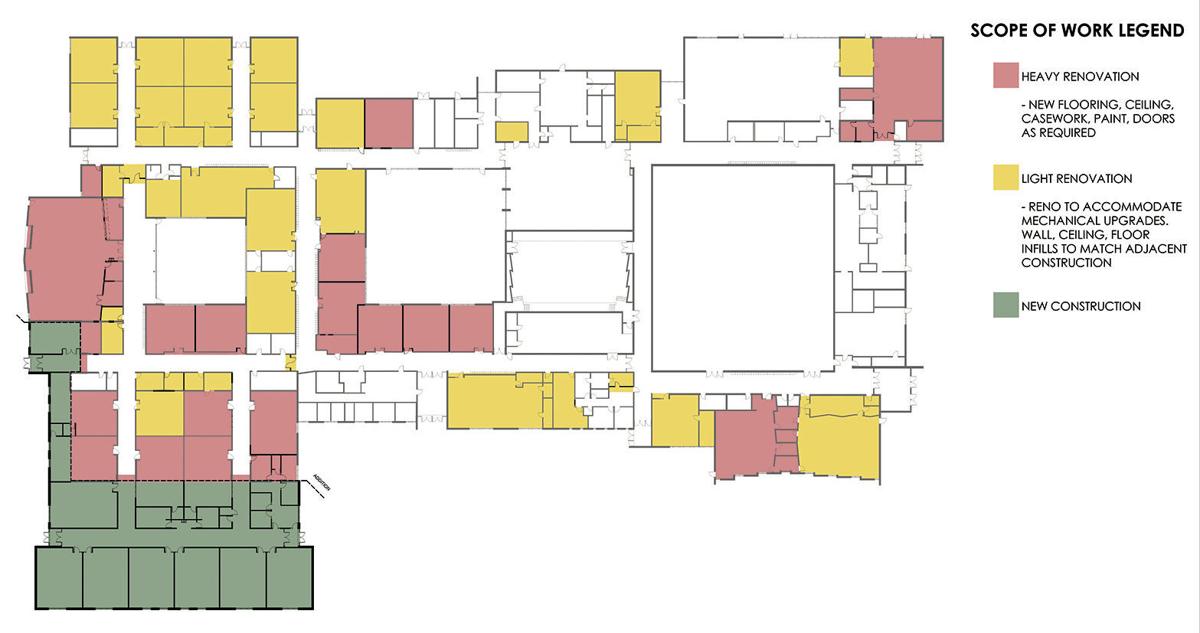 A preliminary view of the River Valley school building project with new construction areas (all in the elementary wing) highlighted in green, “heavy renovation” sections in pink and “light renovation” zones in yellow.

A preliminary view of the River Valley school building project with new construction areas (all in the elementary wing) highlighted in green, “heavy renovation” sections in pink and “light renovation” zones in yellow.

THREE OAKS — Plans to create an elementary school wing at the current River Valley Middle/High School building while upgrading and renovating other portions of the facility are moving ahead.

During the Sept. 27 River Valley Board of Education meeting, Interim Superintendent Dr. Andrea van Der Laan went over the facilities plan for the project which includes a sectioned-off elementary school area on the south side of the building (“their own separate wing”) featuring additional classrooms, a cafeteria/gym created in the current media center, a new bus pick-up/drop-off area behind the school (cars will do the same in front), a new elementary media center, and a raised roof with windows to allow light into the elementary hallway.

A new media center for the middle/high school is planned in the current wrestling area on the other side of the building, the HVAC system for the entire building will be re-done, and many other portions of the facility will be either heavily or lightly remodeled (a color-coded map showing the plan as it currently stands was shown during the meeting).

“We’re still doing a few tweaks here and there,” van Der Laan said, noting that various changes and doing some in-house work are being considered to save money and have the entire project come in near the projected cost of $8.2 million are being explored as plans are finalized.

After the meeting van Der Laan said a 25-person steering committee which includes parents, staff, board members and others has been working on the project.

“They’ve been very creative – that’s how we came up with the bus loop,” she said.

van Der Laan said the next step is to sit down with the construction manager (Skillman Corporation), the architect (Cordogan Clark & Associates) and district officials.

“And then we will come out and present again and then go to final design,” she said, later adding “Our goal is to try and go out for bid in February.”

She said a May 2022 ground-breaking also a goal.

She said future expansion of the building is possible to the south.

Currently the district’s elementary-age pupils attend classes at two campuses – Chikaming for younger students and Three Oaks for those though the sixth grade.

Also on Sept. 27, Elementary Principal Patrick Zuccala and Assistant Principal Lacy Payne told board members about an Engage NY programming employed to support English Language Arts (ELA) education at the elementary level with a goal of raising MSTEP test scores by at least 20 percent over the next three years.

Zuccala said scores over the last three to four years still reflect a “fairly high number” of not proficient scores in the ELA area.

“The idea behind this is to give a little bit more structure, a little bit more of a research-based resource to our upper el teachers in order to move those MSTEP scores in the direction we’d like to see,” he said.

Zuccala said there is no charge for the open-source program, and supplementary texts costing under $400 were purchased with support from the PTO and local Rotary Club.

Also, instructional coaching will be provided on an ongoing basis by Berrien RESA’s early literacy consultant.

Two of the five new student liaisons to the Board of Education attended the Sept. 27 meeting and were introduced by Middle/High School Principal Ryan Portenga – Kora Kennedy (a senior) and junior Karen Merino-Moreno. Also serving as student liaisons are Lillian Moore (a senior); Alexis Walton (senior) and Adrianna Israelite (a freshman).

She was thanked by board members and (from the audience) Jen Rudolph for her leadership.

She’s just been amazing, and we’re so thankful she’s been with us the last few months,” said board member Jennifer Alderink.

Also discussed was a positive report on 83 percent of seventh-graders with A, B or C grades after 63 percent had two or more D and/or F grades last December when they were in the sixth grade.

Portenga said attendance is way up and behavior has improved.

In other Sept. 27 business, the River Valley Board of Education:

Approved recommendations to hire Jessica Lewin as a Certified Child-Life Specialist and Melanie Hutchison as a part-time Culinary Arts instructor.

Were told by van Der Laan that the fitness room will be opened to the public in the near future with current protocols in place.