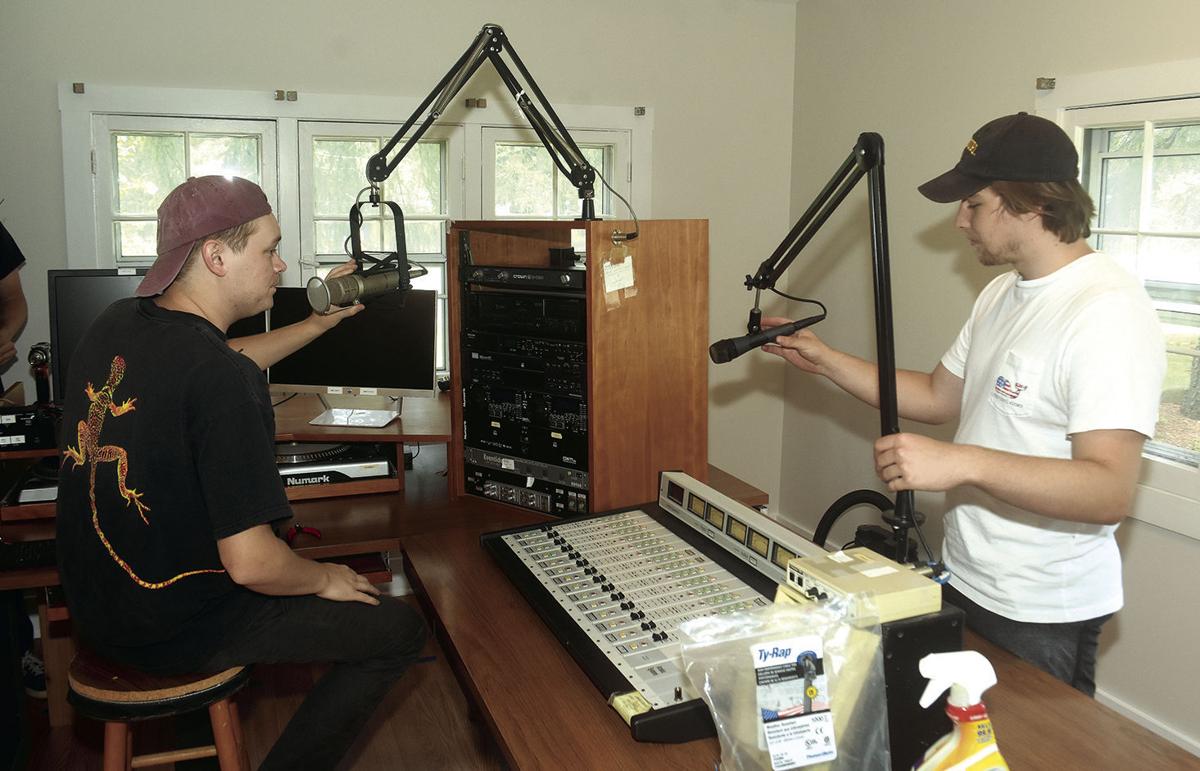 Coleman Connolly and Jakub Kapusta of Imrush Broadcast Services work on setting up Radio Harbor Country’s new Studio A in Sawyer on July 30. 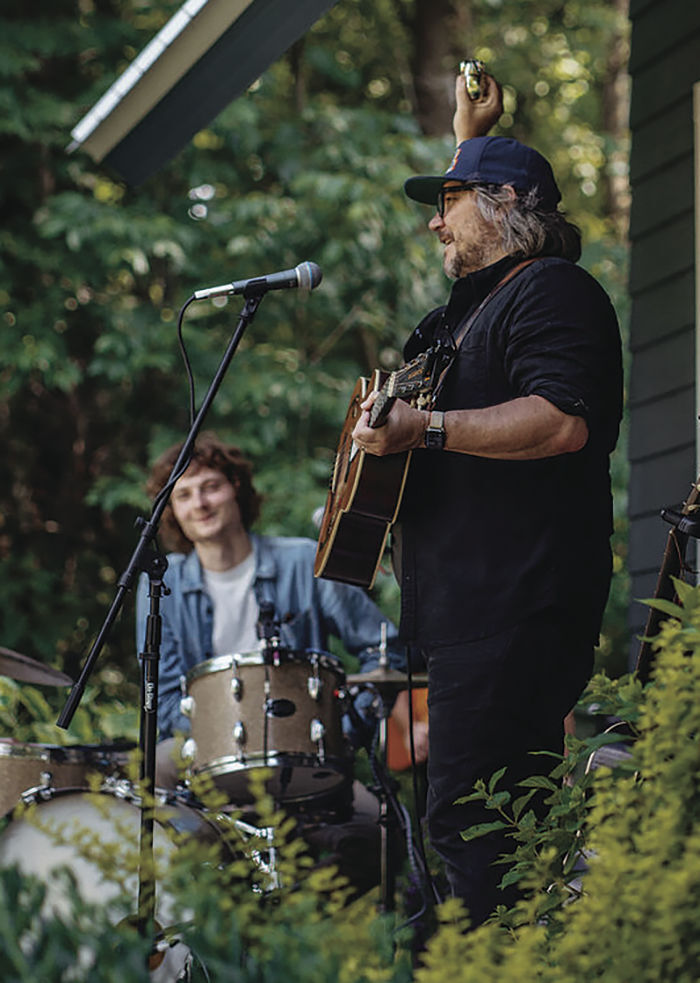 Jeff Tweedy (foreground) and his son, Spencer, play during a recent Radio Harbor Country benefit show at the Storehouse in Galien. 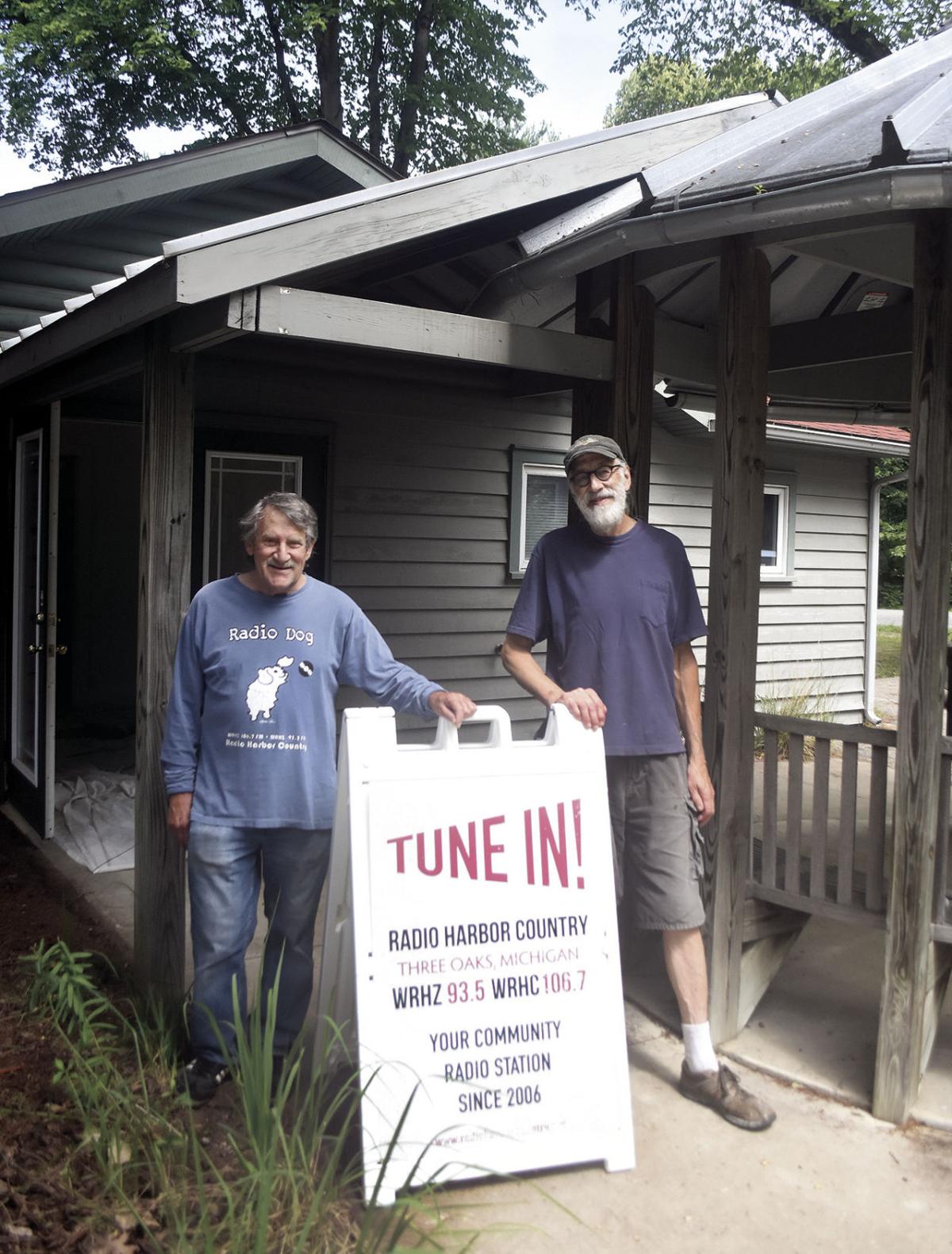 Dave Repetto and Dennis Snow in front of the new Radio Harbor Country office and studio in Sawyer.

Coleman Connolly and Jakub Kapusta of Imrush Broadcast Services work on setting up Radio Harbor Country’s new Studio A in Sawyer on July 30.

Jeff Tweedy (foreground) and his son, Spencer, play during a recent Radio Harbor Country benefit show at the Storehouse in Galien.

Dave Repetto and Dennis Snow in front of the new Radio Harbor Country office and studio in Sawyer.

SAWYER — Radio Harbor Country has a new home in Sawyer.

The main “Studio A” was being set up at 12291 Red Arrow Highway on Friday, July 30, with the goal of having it radio ready by the next day.

That goal was achieved, and longtime “Monkey Versus Robot” host DJ Snowboy (AKA Dennis Snow) said he planned to do his next show live from Sawyer on Aug. 4.

Since its inception in 2006, the local, low-power radio station operated out of a studio near Watkins Park in Three Oaks – in the lower level of a building that also houses full-time residential tenants.

Snow said he and Radio Harbor Country Board Charman Dave Repetto first explored what would become the station’s new studio/office in March of 2021.

Peg Kohring of The Conservation Fund had been working out of the building even before Chikaming Open Lands moved into a neighboring facility in 2014 – but is now working from home.

“We got the heads-up for this place from Peg,” Repetto said, noting that she was once chair of the Radio Harbor Country Board.

“Once she moved out of here I asked her ‘What do you think of this for the radio station?’ and said it would be a wonderful space.”

In early 2014 The Pokagon Fund donated two buildings and a lot at 12291 Red Arrow Highway in Sawyer to the non-profit Chikaming Open Lands land conservancy. COL moved from Lakeside into its current office at the site in February of 2014.

Snow said his reaction to the potential new office and studio space was: “We’ve got to move into this,” adding that Studio A (the staton’s main recording studio) fits perfecty in the back room.

Snow said the main room can be used for general meetings and hanging out, public events and possible live performances. A smaller DJ production area will be located near the main studio. There’s also a kitchen and an up-to-date handicap-accessible bathroom.

“Nothing really changes. we’ll still be broadcasting on the same frequencies,” Snow said.

Snow said he plans to create a “DJ window” similar to the one in the Three Oaks studio “so when they come in people can see the studio.”

Repetto said Chikaming Open Lands had an incentive to rent the facility to another non-profit organization, with both Executive Director Ryan Postema and the COL Board in favor of renting it to Radio Harbor Country.

Repetto said he lives nearby and has always thought it would be a great location for the station.

Both Repetto and Snow noted that the public exposure and visibility is so much greater at the new location along Red Arrow Highway near Warren Dunes State Park. The Internet speeds also are much faster.

Repetto said there are about 35 locally produced shows airing on Radio Harbor Country.

Snow said about four DJs do live shows, with others either recording in the studio or at home to be area later through an automation program and loading staff members.

Repetto said the studio was shut down in 2020 during the COVID lockdown, so many shows were produced at host’s homes.

Repetto said station board members, show hosts and supports of Radio Harbor Country have pitched in to provide volunteer support to make the move possible.

While Coleman Connolly and Jakub Kapusta of Imrush Broadcast Services were setting up Studio A on July 30, Miller’s Cave show host Rob Miller (once a professional painter) was painting the entry area.

Repetto said Imrush Broadcast Services also worked on setting up the expansion of the Three Oaks studio when the WRHZ frequency was added about six years ago.

Snow said supporters of the station also made donations to help set up the new studio (a process with an estimated cost of about $12,000).

Repetto said show hosts Michael Slaboch and Penny Duff of the Storehouse in Galien arranged for a recent benefit concert by Jeff Tweedy and his son Spencer to raise almost half of the funding required for the station relocation.

Repetto said a grant request has been submitted to The Pokagon Fund, adding that the station got one of the original Fund grants in 2008.

Since then, he said a number of Pokagn Fund grants have helped keep Radio Harbor Country on the air.

Snow said the process of deciding what to do with some of the records, CDs, donated furniture and other contents of the Three Oaks studio (home to Radio Harbor Country since it went in the air in February 2006) is ongoing and will continue through August. He added that the station will be a part of the Aug. 13-15 U.S. 12 Garage Sale at the old site (to the right of the entrance to Watkins Park behind Harding’s).