Red Arrow Highway is shown back open (one lane each way) on July 2 in Union PIer. 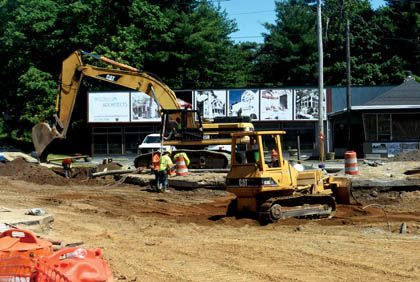 Finishing up the sewer main project in the center of Union Pier last week.

Red Arrow Highway is shown back open (one lane each way) on July 2 in Union PIer.

Finishing up the sewer main project in the center of Union Pier last week.

UNION PIER — Red Arrow Highway in Union Pier re-opened to traffic (one lane in each direction) in time for the Fourth of July weekend after a massive  GRSD Sewer Authority project in the "downtown" area (Townline Avenue between Greenwood Avenue and Red Arrow Highway) was finished.

Sewer work is ongoing along Red Arrow Highway north of Union Pier as a new sanitary sewer is installed between Union Pier Road and Berrien Street.

• Reconstruction and streetscaping at the intersection with Union Pier Road/Townline Road;

• Mill and Resurface from Community Hall Road to Union Pier Self Storage and from Goodwin to Berrien Street;

• A three-lane section, including a dedicated center left turn lane for business access;

• Sidewalk for pedestrian access at and around the intersection of Red Arrow Hwy. and Union Pier Road;

• Improved stormwater infrastructure in the intersection;

• Additional parking areas for access to shops and restaurants