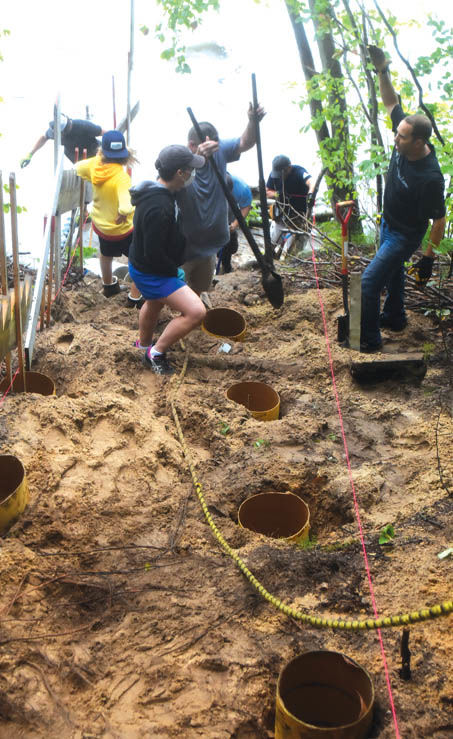 Volunteers at work on a new Cherry Beach access stairway during the misty morning of Friday, July 10. 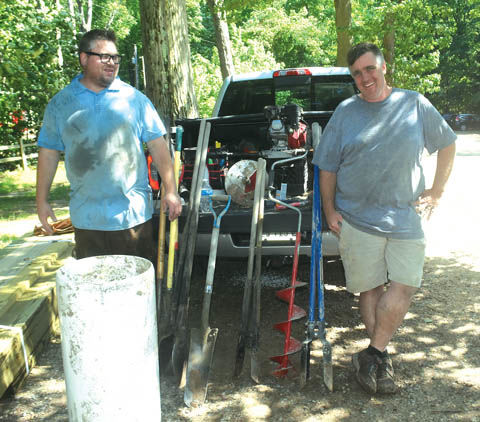 Volunteers at work on a new Cherry Beach access stairway during the misty morning of Friday, July 10.

HARBERT — On July 10 a group of volunteers were hard at work on the bluff building the foundation for a new stairway to Cherry Beach.

One of those volunteers, Jason Kropp, said his children have been raised running up and down the Cherry Beach stairs for the past 14 years.

The bottom portion of the former stairs washed away earlier this year and the rest of the structure was deemed unstable and removed.

Kropp said the first four cement footings at the lake level for the new stairway were poured on July 10 (amidst the raging waters of a stirred-up Lake Michigan). There will be a total of 12 footings.

He said the design has the stairs going off at an angle when they near the beach to help withstand erosion and high waves.

During the July 9 Township Board meeting Chikaming Supervisor Bunte praised the committee of local residents who are rebuilding the beach access stairs at Cherry Beach, saying they have done a “great job of getting an engineer and the community and volunteers together.”

Joe Sipek (Chairman of an Ad Hoc Beach Access Committee who spearheaded the Cherry Beach effort) said July 10 was the first big work day with about 10 volunteers. He said the beach-level footings took five bags of concrete each to complete. He said the remaining ones will only require about one bag each.

Then the stairs themselves have to be built (Sipek estimated it will take a couple of weeks to complete the project).

He said architect Dan Menitoff designed the stairway, which is being built to the latest code and includes a cable system to keep it intact on the hill.

Josh Higgins also helped out — he normally is in the booth at the entrance to the Cherry Beach parking lot.

“I just want to be able to sit in the booth,” he said.

To find out more or support the project, go to the www.gofundme.com/f/restore-cherry-beach-stairs (the effort had raised more that $6,000 as of July 14).

During a recent special Chikaming Park Board special meeting, Sipek said approvals have been secured from the Police and Fire Departments and a Zoning/Building Official (Van Thornton) as long as public safety is maintained.

He said the design is for a very secure system with posts set in concrete and cables to secure the four-foot wide stairs in the event of a washout. If any part of the stairs becomes separated they can be recovered. This is meant to be as permanent as possible given the vagaries of Mother Nature, not a temporary fix.