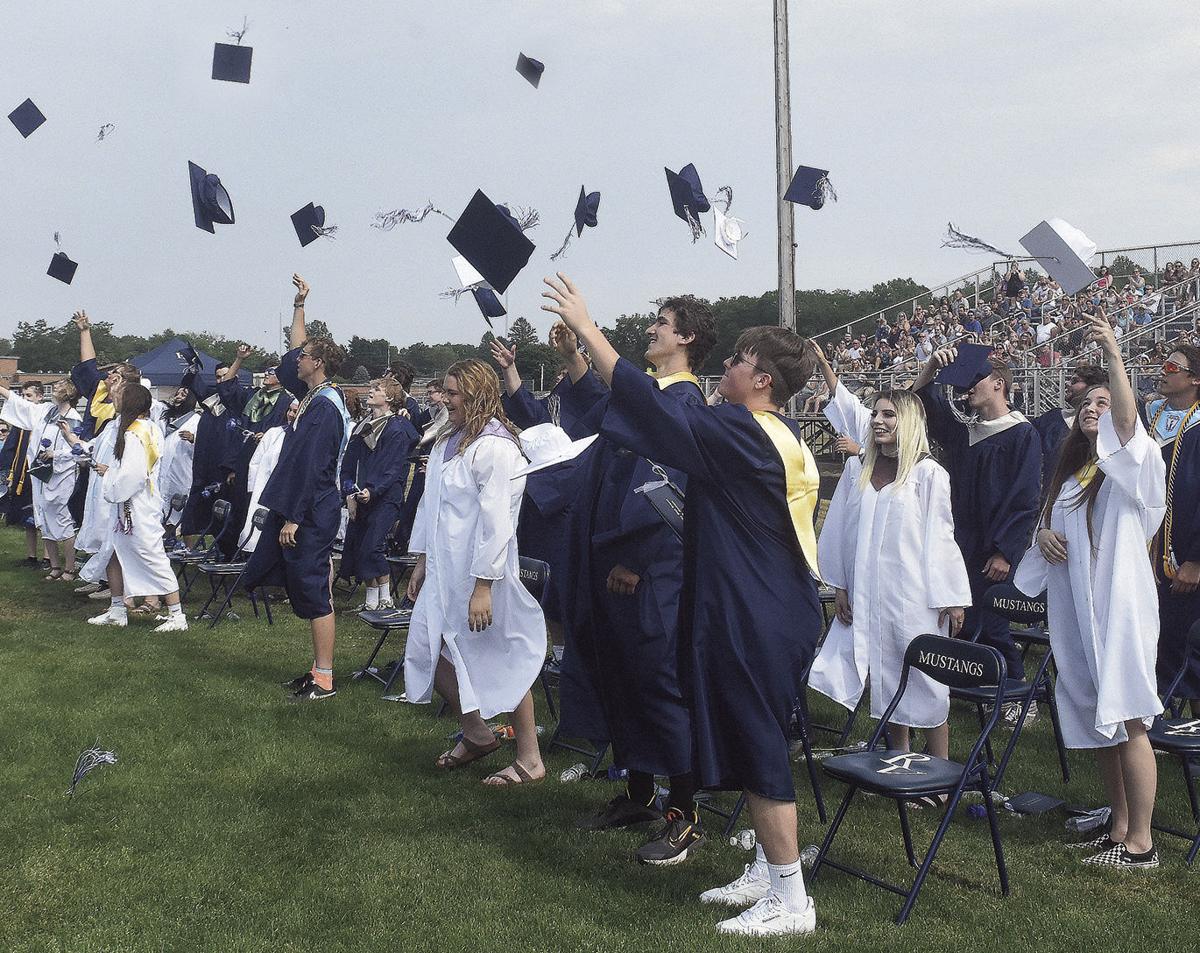 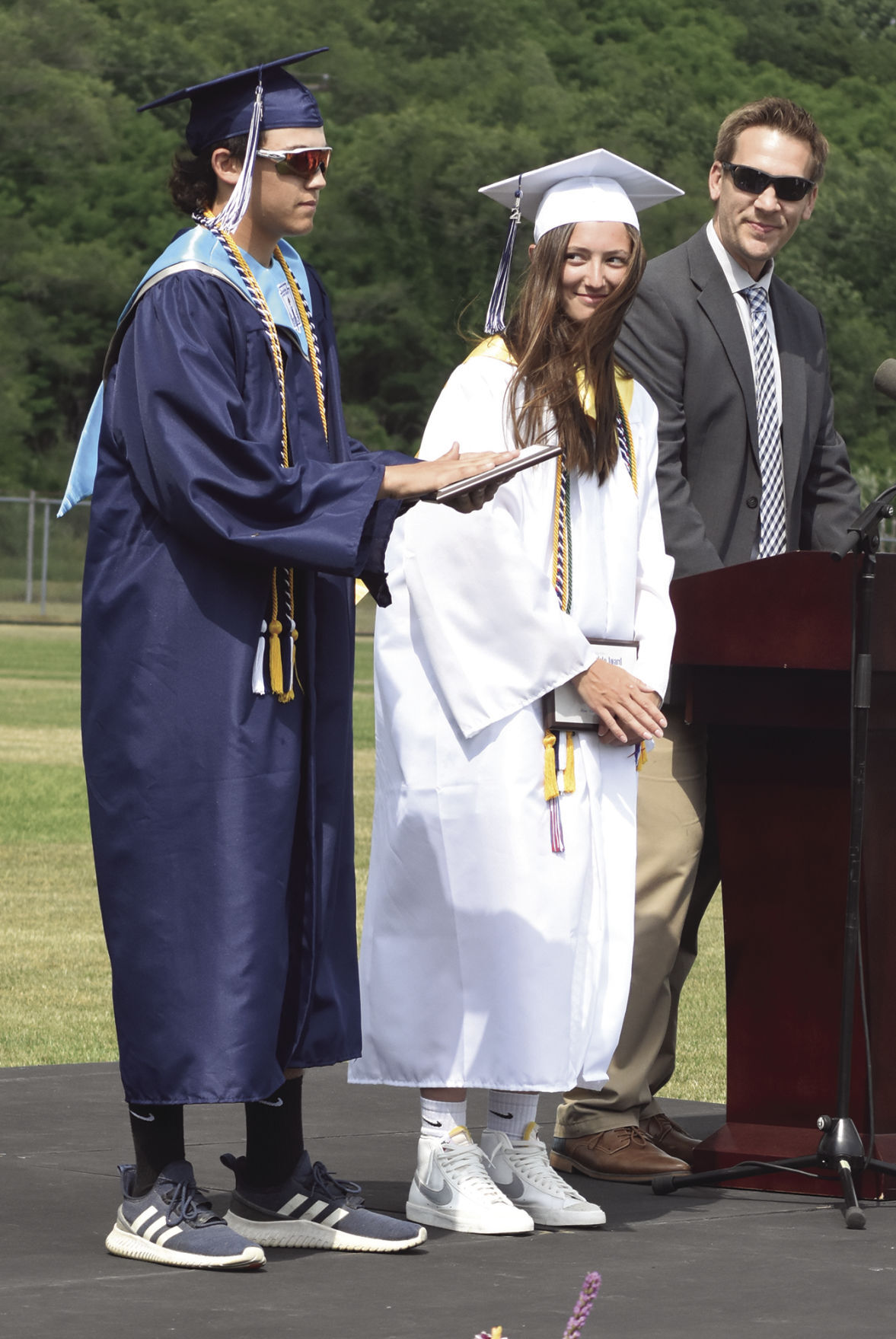 Evan Strefling and Taylor Volstorf are honored as the top scholar athletes of the River Valley High School Class of 2021. 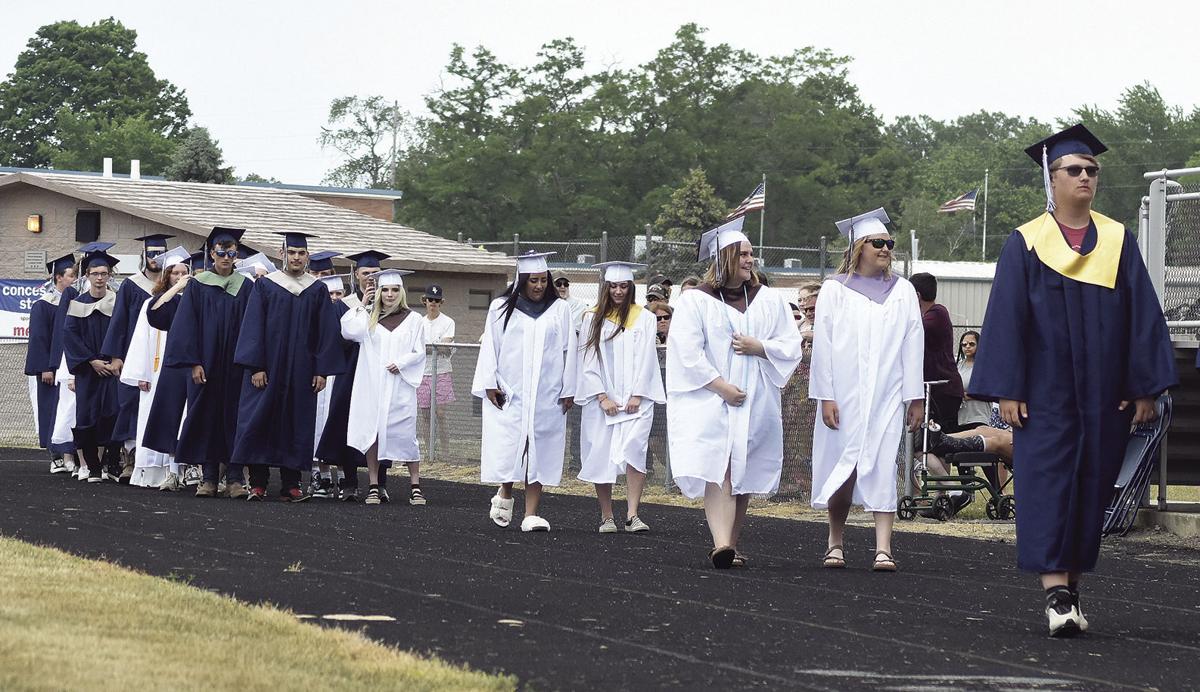 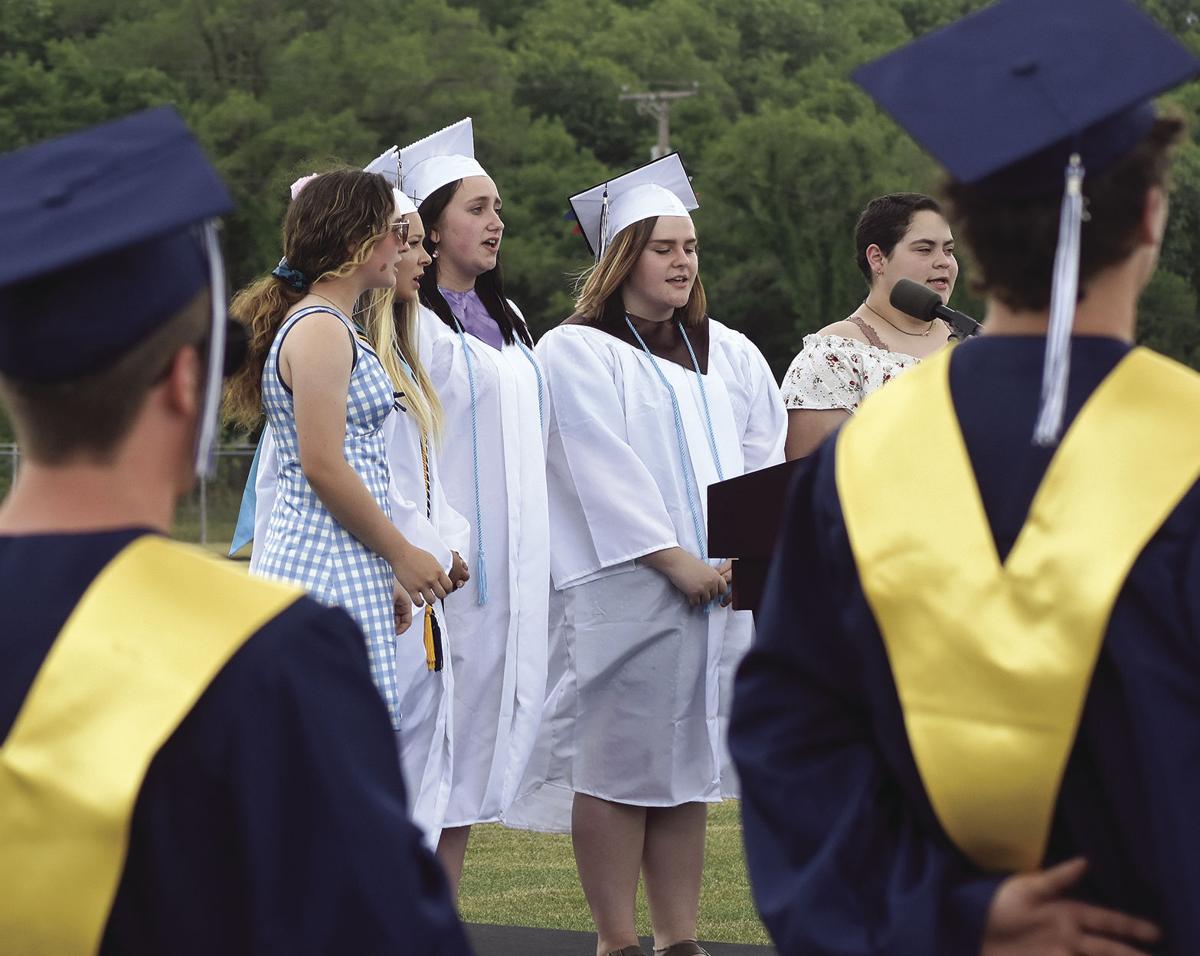 Singing the National Anthem at the start of the June 6 River Valley High School graduation ceremony. 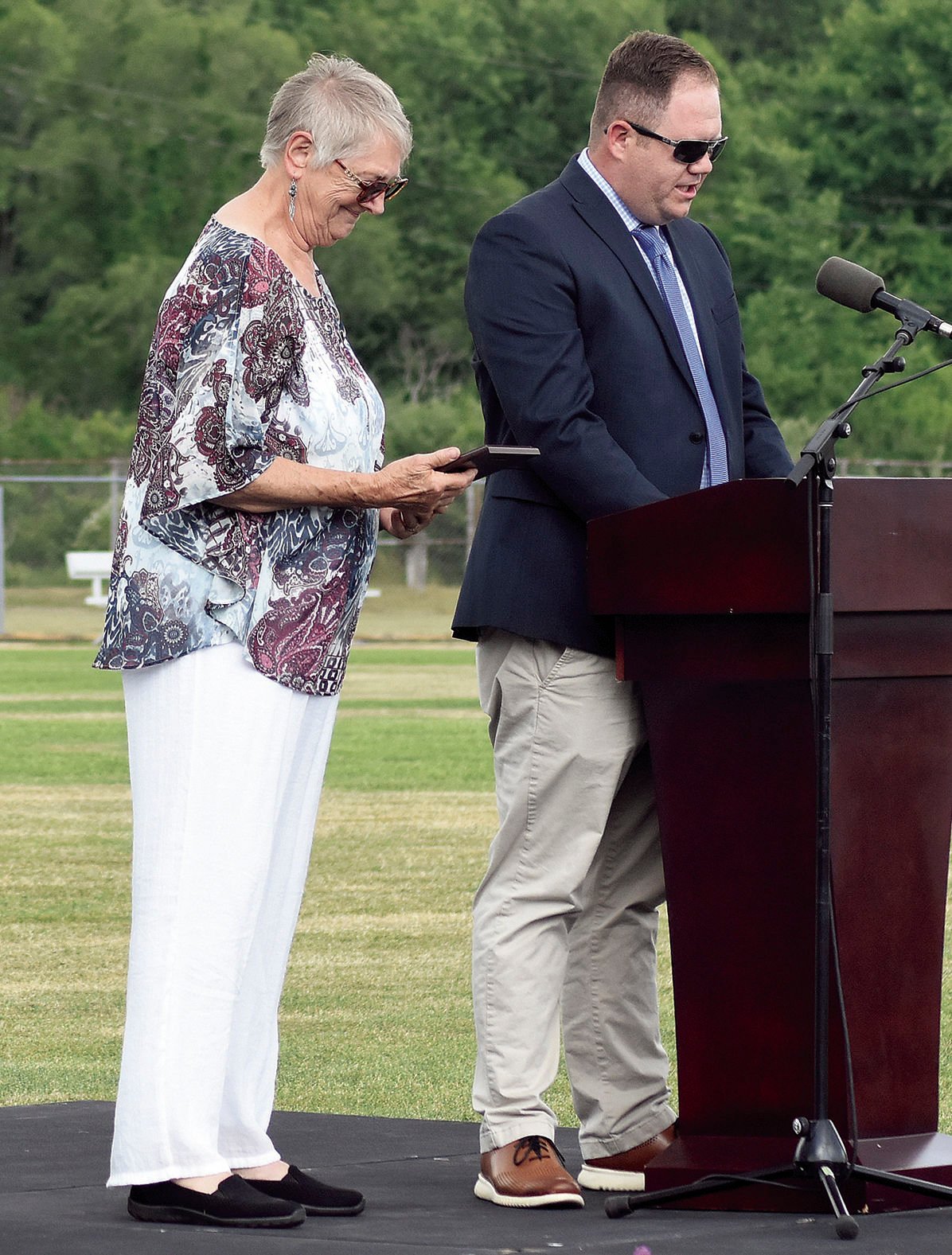 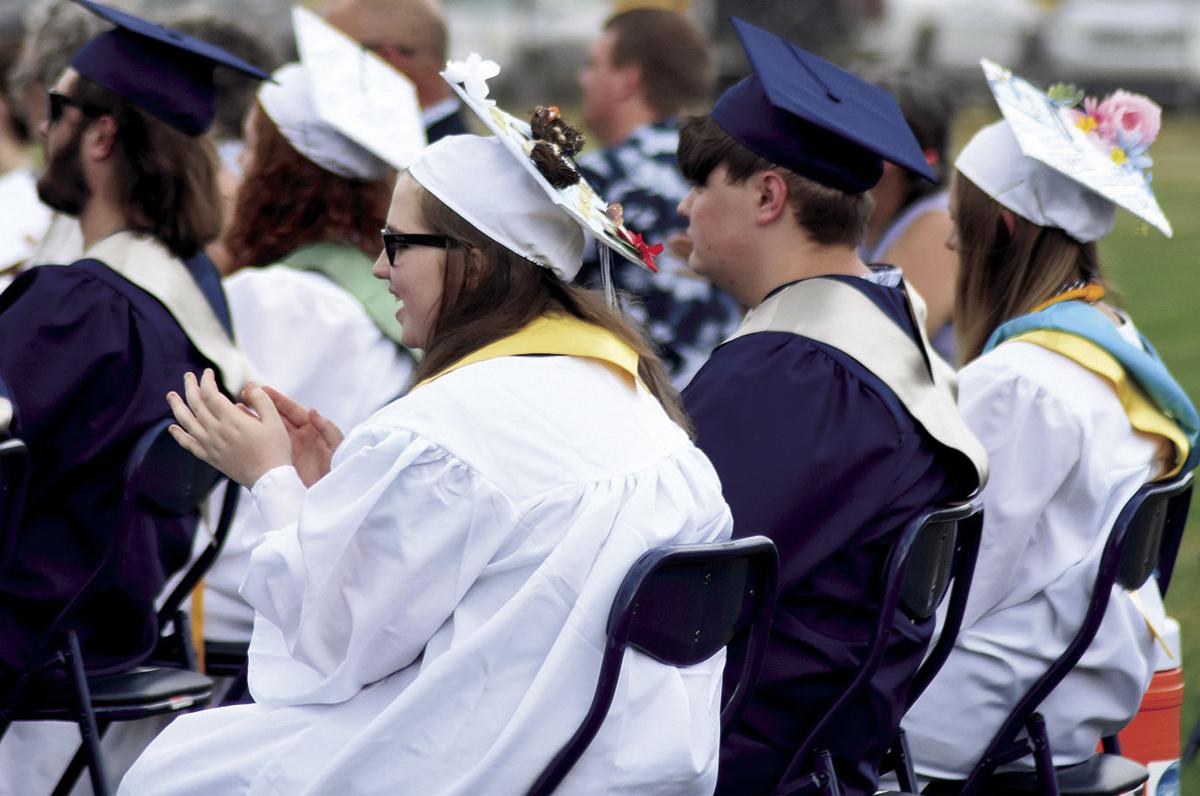 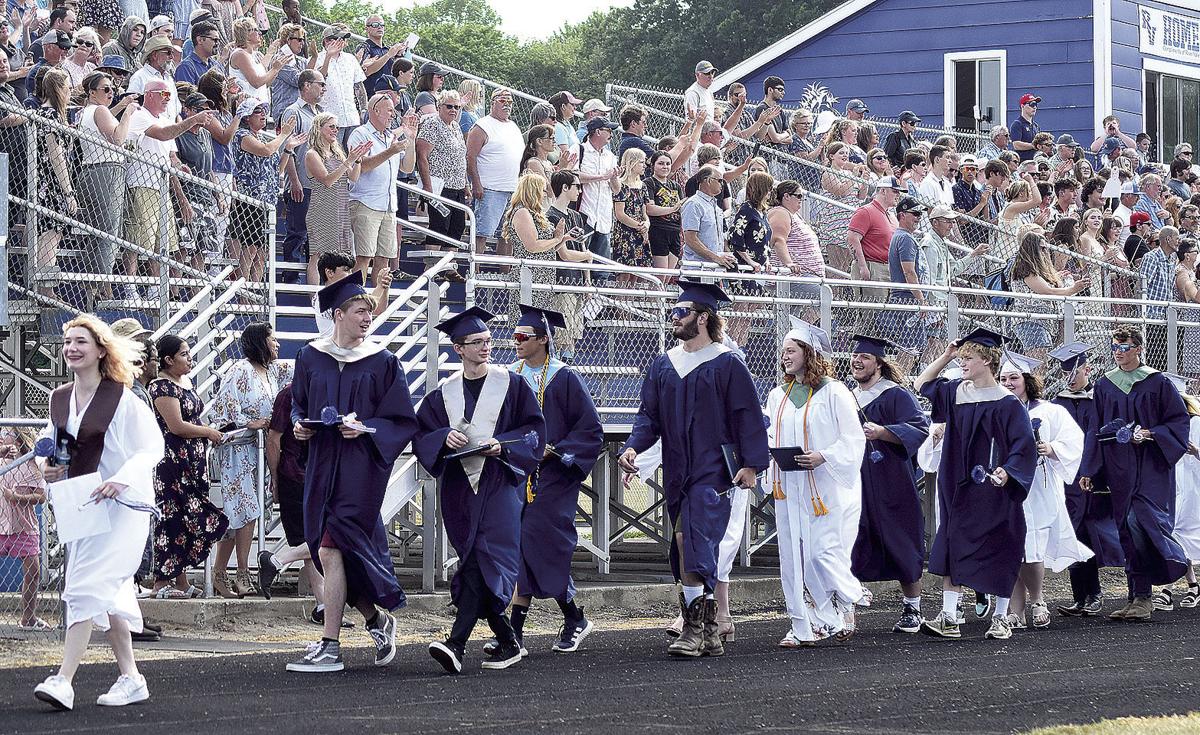 River Valley High School graduates march out at the conclusion of the June 6 ceremony. 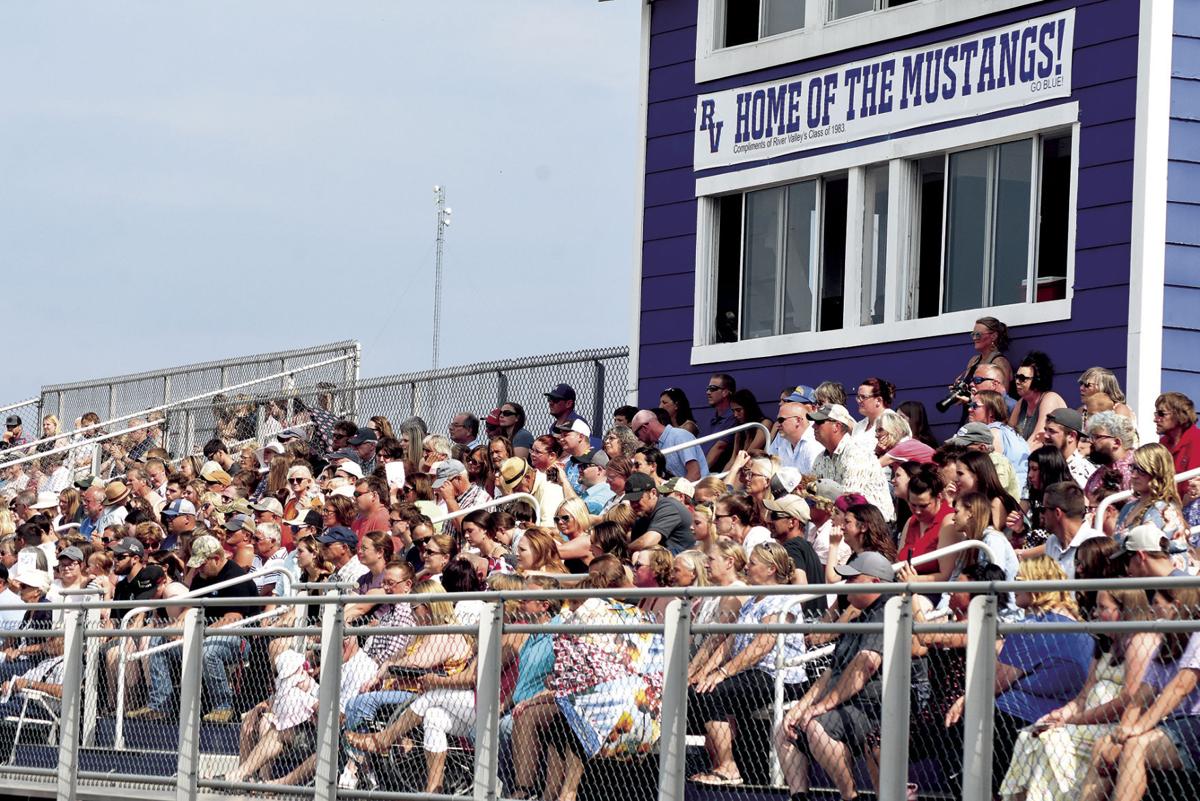 Evan Strefling and Taylor Volstorf are honored as the top scholar athletes of the River Valley High School Class of 2021.

Singing the National Anthem at the start of the June 6 River Valley High School graduation ceremony.

River Valley High School graduates march out at the conclusion of the June 6 ceremony.

RIVER VALLEY — The River Valley High School Class of 2021 graduated in front of a full house at the district’s football field on the afternoon of Sunday, June 6.

“It has been a great journey to this day, and we are excited to celebrate these 39 graduating seniors,” said River Valley High School Principal Patrick Breen. “We are also so very thankful to be able to have a ceremony with very few restrictions.”

Awards given out during the graduation ceremony included the School Service Award going to Darlene Heemstra of the Rotary Club of Harbor Country for providing reading books for elementary pupils and personal hygiene items, food, clothing and “anything else we need” at the Middle/High School.

“Even throughout the pandemic she has regularly visited the school, dropping items off for our students in need,” Breen said. “Darlene is a prime example what the School Service Award is meant to recognize, and the River Valley Schools are blessed to have people like Darlene and organizations like the Rotary Club.”

Evan Strefling and Taylor Volstorf were honored as the top scholar athletes of the River Valley High School Class of 2021.

“These are individuals who got the job done academically in the classroom … and who achieved the high honors in athletic competition,” said Athletic Director/Assistant Principal Ryan Portenga.

Volstorf also was recognized as Valedictorian and Aiden Bettig was honored as the class Salutatorian.

In his Salutatory Address, Bettig said he spent his time in high school working hard, keeping his grades up, and finding a job. He said being officially named Salutatorian was exciting, but the feeling didn’t last.

“I’d been acknowledged and congratulated fr all my hard work over the four years in high school, yet none of my worries disappeared, none of my problems were resolved,” he said.

Bettig said he eventually came to the conclusion that he had worked hard to achieve a goal at the expense of not attending to his relationships.

Volstorf began her Valedictory Address by saying she thinks the most valuable thing members of the Class of 2021 have learned over the past four years is perseverance.

Although their senior year got off to a rough start with a mix of virtual and in-person learning making it easy to just do the minimum to get along.

“Most if us have probably figured out that taking the easy route usually ends up being harder in the long run,” she said.

“We all made it here. We persevered through everything that was thrown our way,” she said, thanking teachers and staff for helping students persevere.

“COVID caused for a strange senior year, but we made the best of it, whether it was playing kickball on the football field for Homecoming, or playing volleyball with the staff during Winterfest,” she said.”I’m very thankful that we were able to have these gatherings.”

No matter where members of the Class of 2021 end up, Volstorf said they will remember these years and the people who helped them along the way.

“There are so many memories that we have shared together, but don’t worry, I won’t go over crushes or middle school relationships,” Senior Class President Hanna Lumley told the graduates-to-be.”I’m sure the baby pictures in the slide show will embarrass us enough.”

She said nothing could really prepare them for 2020, which ruined the idea of what senior years was supposed to be.

“We were supposed to scream in the student section at football and basketball games, cheer with the cheerleaders, dance to the marching band and have a last performance in stage. Because of the pandemic so many of out lasts were taken away from us. Even though this past year has done everything in its power to push us down, we did nothing but fight back.”

She said her peers, teachers, parents and members of the community have worked to make this year as normal as possible.

“I cannot be be prouder to call myself a Mustang because of this community’s perseverance,” she said.

“The best thing that came out of this year is that we are all here today,” she said.”We are blessed to have a normal graduation with our friends and families in the stands. With everything we lost we have also gained so much, and I am so excited that this is how I get to end my time at River Valley.”

Breen thanked parents and family members for their partnership in educating the 39 graduates. He also credited staff members with making an impact on the students “that lasts a lifetime.”

Breen said the Class of 2021 have been a joy, and also a challenge.

“This class has had a tough road, but they sure know how to finish, he said. “Every single senior is graduating this year.”