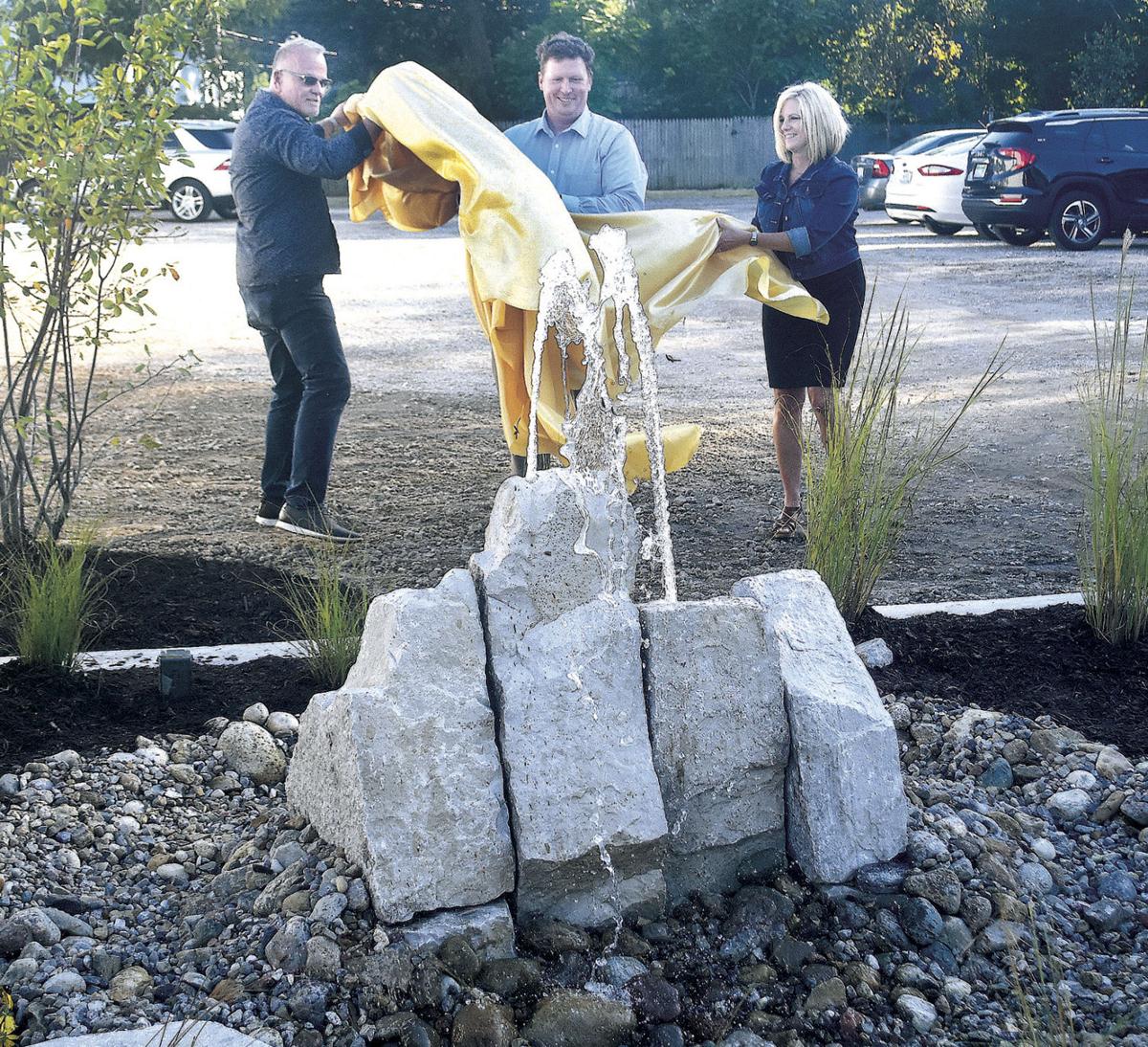 David Bunte, Dan Petersen and Michelle Heit unveil a thank you to The Pokagon Fund at the Union Pier trailhead property during a Sept. 24 Street Party. 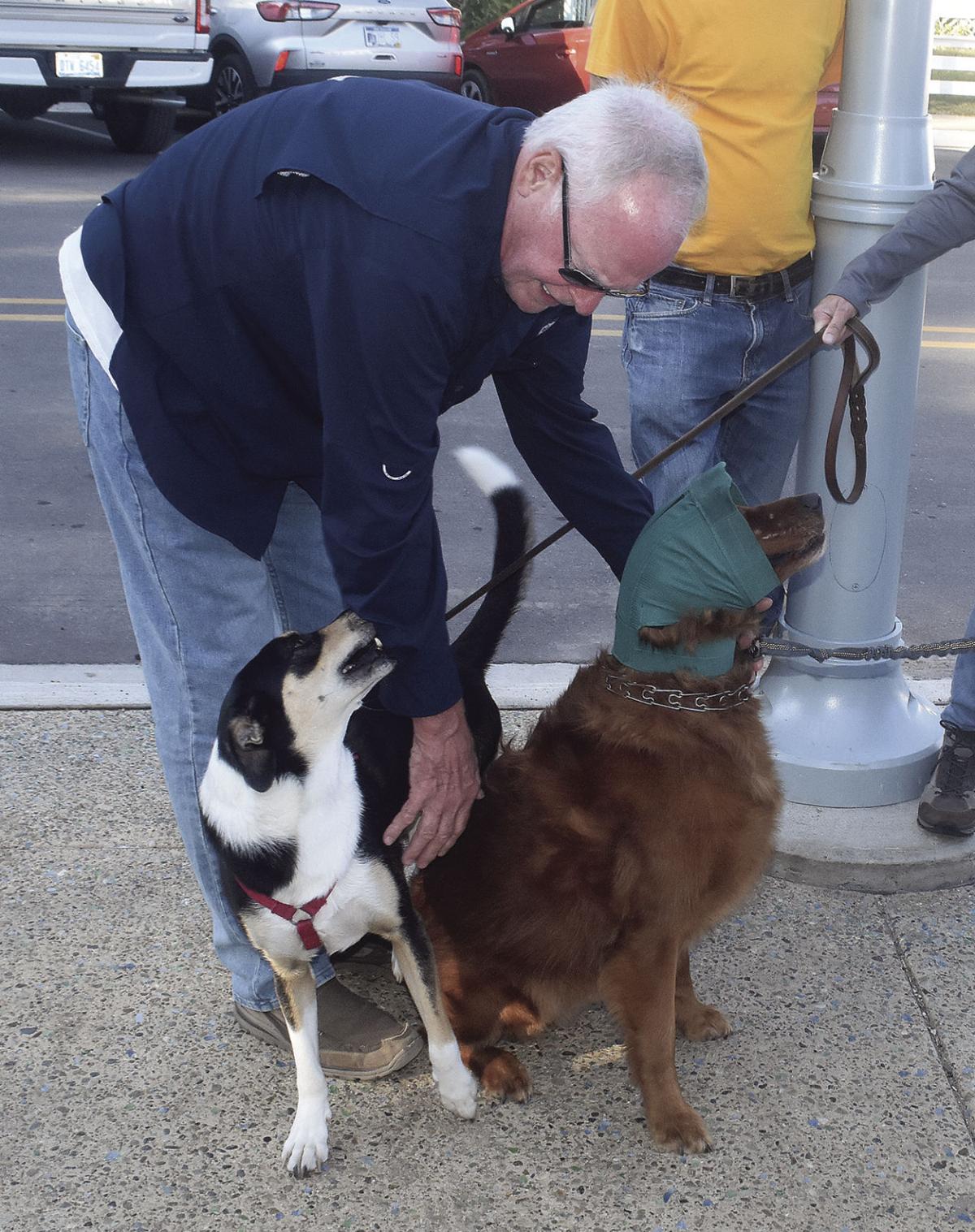 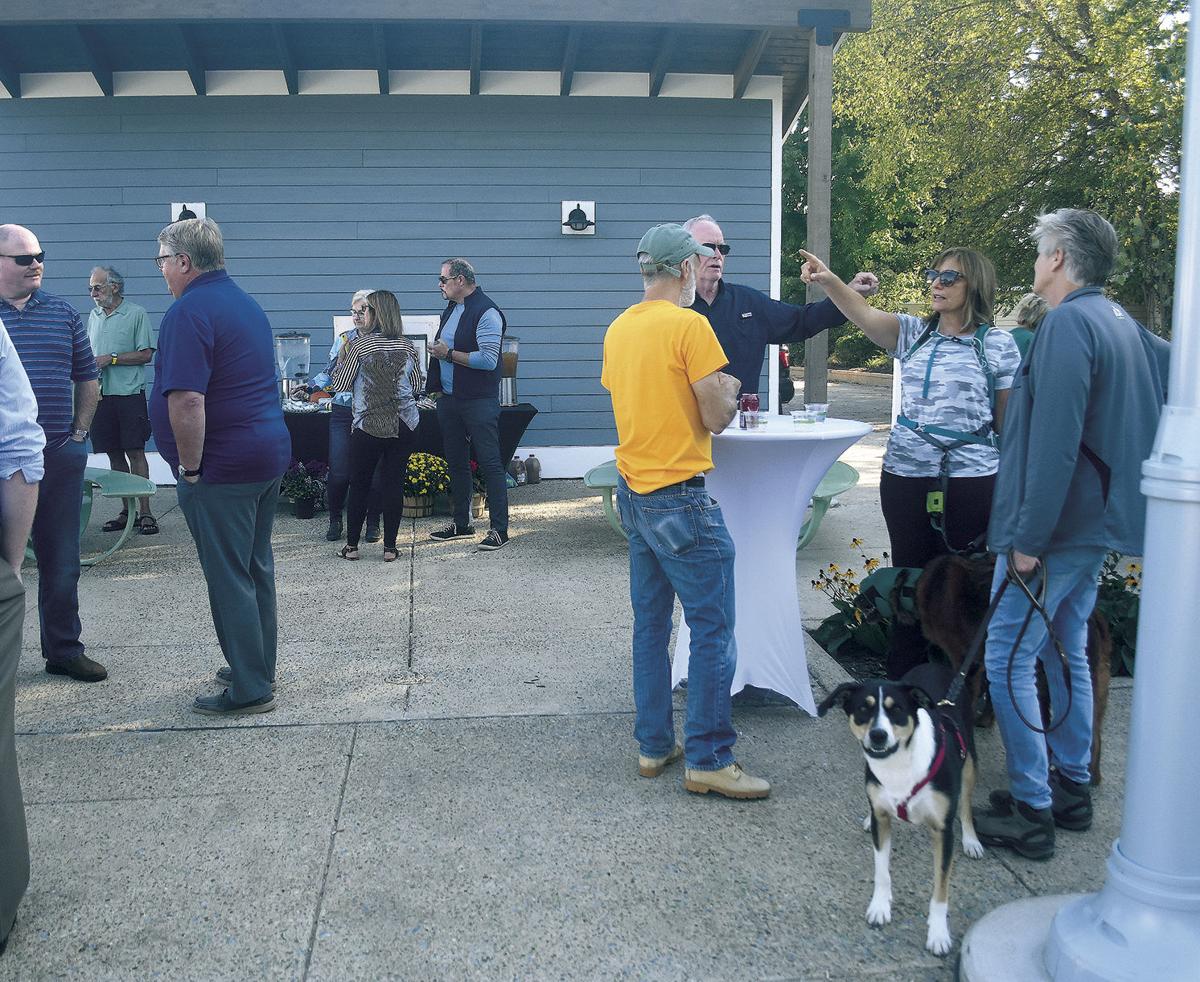 Socializing at the Union Pier trailhead during the Sept. 24 Street Party. 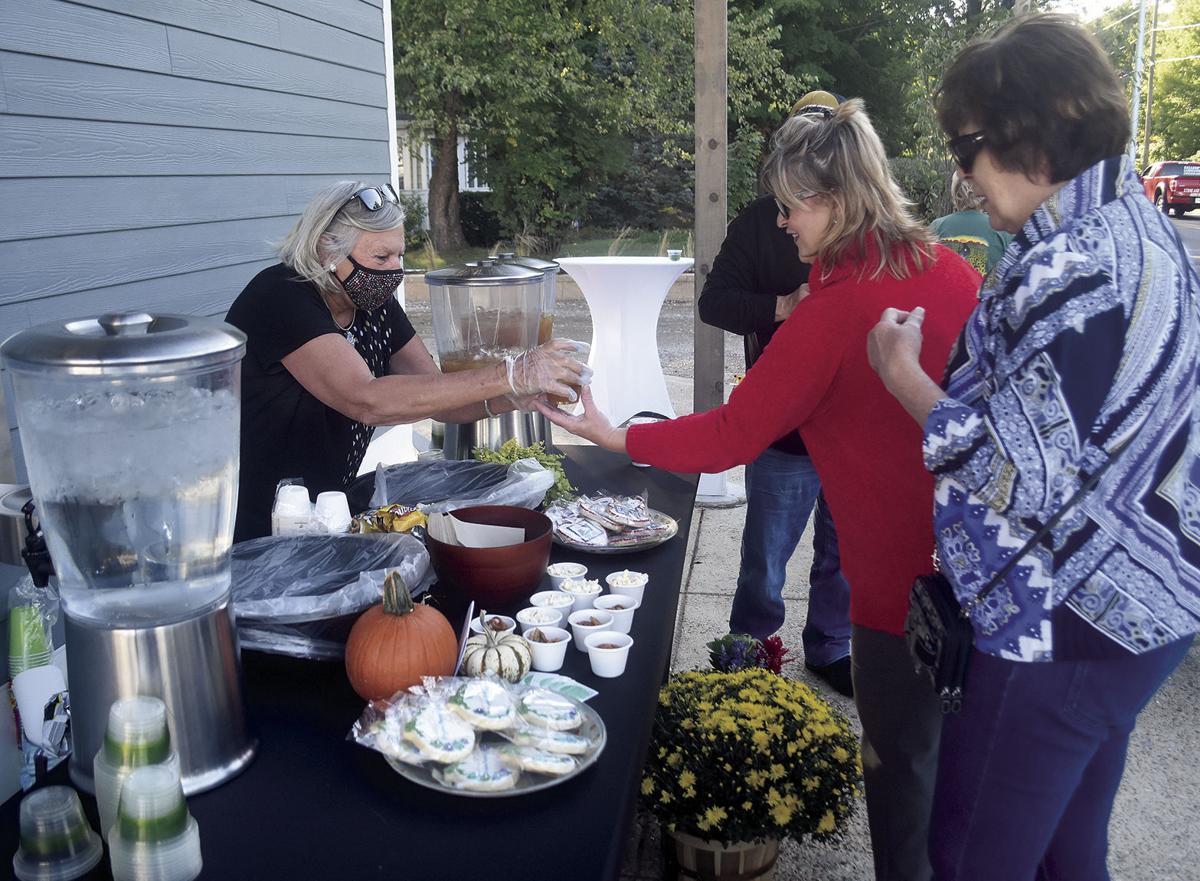 David Bunte, Dan Petersen and Michelle Heit unveil a thank you to The Pokagon Fund at the Union Pier trailhead property during a Sept. 24 Street Party.

Socializing at the Union Pier trailhead during the Sept. 24 Street Party.

UNION PIER — A permanent “thank you” to The Pokagon Fund was unveiled at the new downtown Union Pier trailhead during a Sept. 24 “Street Party.”

Pulling the veil off the “water feature” and fountain designed by Steve Nesci of Nesci Landscapes in the front, left portion of the trailhead property were New Buffalo Township Supervisor Michelle Heit, Chikaming Township Supervisor David Bunte, and Dan Petersen, executive director of The Pokagon Fund.

“I’m so excited to look around and finally see all of our hard work that we’ve envisioned for so long … come to fruition. After three years of planning, construction and working with many of you, we are finally seeing all of our work became a reality,” Heit said to those assembled at the trailhead along Town Line Road for the celebration.

“The reason we are all here today, and able to join the streetscape, non-motorized trail and trailhead is all thanks to our partners The Pokagon Fund,” she said. “This is just one of many great investments that they’ve made in Harbor Country. Union Pier is safer and a more pleasing place now because of funding from The Pokagon Fund. The non-motorized trail, trailhead, parking lot and street amenities are such great additions to this area.”

Heit said she and Bunte discussed options such as a plaque or planting a tree to thank The Pokagon Fund before the water feature/fountain became the choice.

“I’m just sad that John Krsul (a former Pokagon Fund interim executive director and special liaison to the Board who passed away in June 2020) is not here with us today.” Heit said. “He was truly excited about this project and would love to see it completed … He is truly missed,” adding that a plaque to honor his memory will be installed at the trailhead soon.

She said Petersen, executive director of The Pokagon Fund, came on board in the middle fo the project “and had been a great partner.”

Bunte said the partnership between the two townships made it possible to accomplish something many thought could never happen.

“Partnerships with your local municipalities get things done. We can make progress … we can do a lot together,” he said.

Heit said she looks forward to working with Bunte on “continuing the non-motorized trail in both of our townships.”

Bunte thanked The Pokagon Fund for its grants to the project on both sides of the township lines.

Heit said the two townships split the cost of the trailhead (which cost approximately $250,000 and includes 25 parking spots, restrooms, bike racks and a picnic area) with The Pokagon Fund paying all of New Buffalo Township’s cost and a portion of Chikaming’s.

The Pokagon Fund contributed over $1 million for the entire Union Pier project, which also included a now-finished streetscape in the downtown area and along an upgraded Red Arrow Highway that includes a 10-foot wide non-motorized path.

Heit said the downtown streetscape, the pathway and the trailhead all seem to be getting a lot of use.

“It’s definitely getting used like we thought it would,” she said.

She thanked Kevin Stack of the Berrien County Road Department, the Berrien County Board of Commissioners, Eric Naegu of the Antero Group, Wightman (including Melanie Stanage and Ben Baker), Steve Neschi of Neschi Landscaping, members of the New Buffalo Township and Chikaming Township boards.

“I want to thank the Union Pier business owners for their patience … Thanks for taking the time to meet with us and give input. I hope you found this to be a benefit to your business and that it turned out the way you’d hoped. We couldn’t have done it without you,” Heit said.

Petersen said one of The Pokagon Fund’s priorities is to award grants for projects that promote community vitality.. (innovative projects that develop new facilities that contribute to the recreational or economic development that in turn create more vibrant communities in Southwest Berrien County.)

“This project does exactly that.”

“The Pokagon Fund’s financial contributions to the Union Pier redevelopment project covered a portion of many of the items that make it unique, like the light poles, benches, bike racks, receptacles, sidewalks with decorated glass, the landscaping and ornamental plantings, the non-motorized path that creates a safe passage way for bikers and pedestrians along a stretch of Red Arrow Highway, and the acquisition and development of the trailhead and rest area,” Petersen said.

“This project is indeed a catalyst for future community placemaking projects. In fact Berrien County was recently awarded a matching grant for $90,000 from the U.S. Department of Agriculture to fund the design of a trail that will connect New Buffalo to Union Pier.”

Petersen thanked “the many stakeholders who were part of bringing this project to fruition” – particularly the two townships (specifically Heit, Bunte and Kevin Stackof the Berrien County Road Department) and the County Road Department “for their incredible intergovernmental collaboration with one another” – also thanked the businesses and residents of Union Pier “for their thoughtful input throughout the planning phase, and patience during the construction phase of the project.”

“Exciting things are happening in Harbor Country because of your leadership.”

He also recognized Pokagon Fund Board members Rob Gow and Judy Zabicki for attending the Street Party at the Union Pier Trailhead.

Kevin Stack, County Engineer with the Road Department, said the three-year project in Union Pier was preceded a year earlier by some paving to “correct the minefield of potholes that were here.”

He said a lot of time was spent scoping and designing the project – “the gateway to the rest of Red Arrow.”

Stack said the downtown New Buffalo streetscape project and then the work in Union Pier will be followed by continued work on the Red Arrow corridor “north and south from here.”

“You’ll see it move a lot quicker now that we have a template to refer to,” he said. “Right now we’re up in Harbert, you see our construction going in up there. Won’t have the streetscape element quite right away when we’re done – the township will work on that later – but you’re going to see the same kind of template of Red Arrow going through that area.”

Stack said the county commissioners are on board with making the non-motorized path “a true gateway to Berrien County from Chicago.”

He said the Road Department received an award from the County Road Association of Michigan for its work with nine different governmental agencies on the Union Pier project.