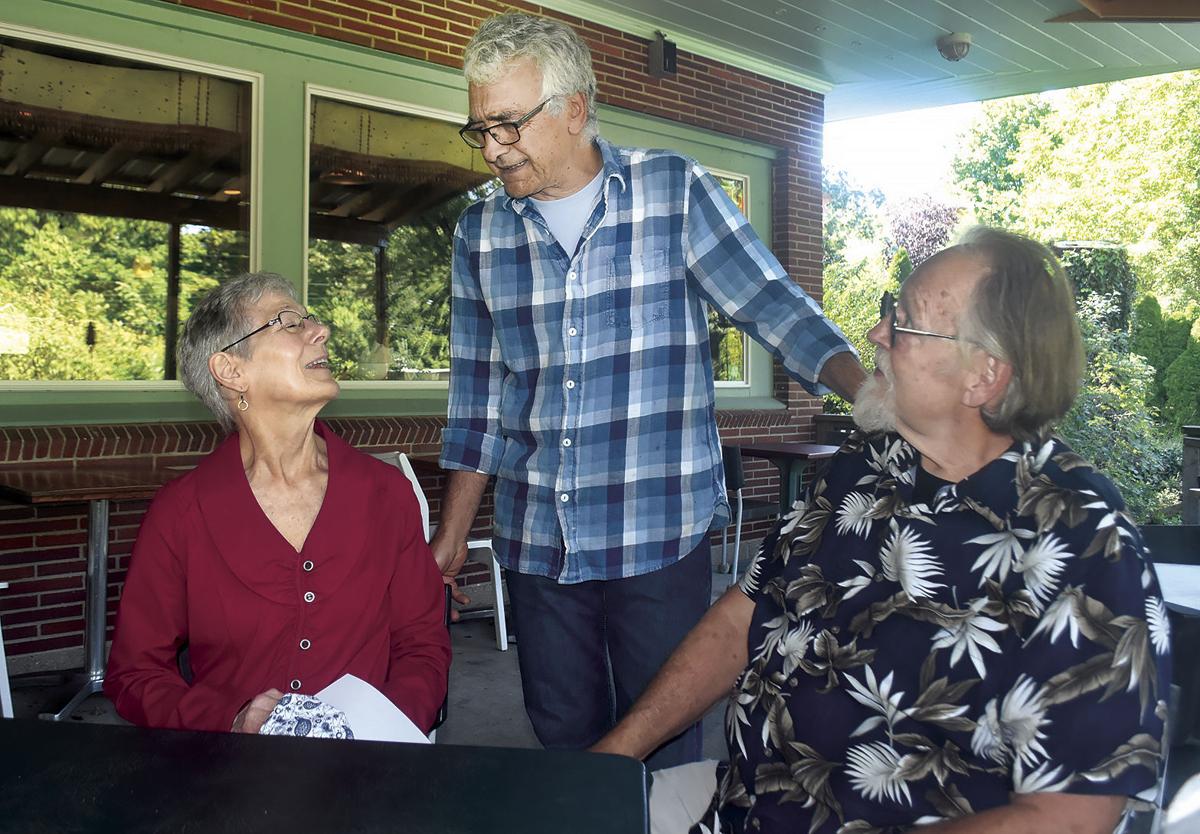 Ibrahim Parlak (center) talks with Kris and Joel Klass at Cafe Gulistan in Harbert on Sept. 26. 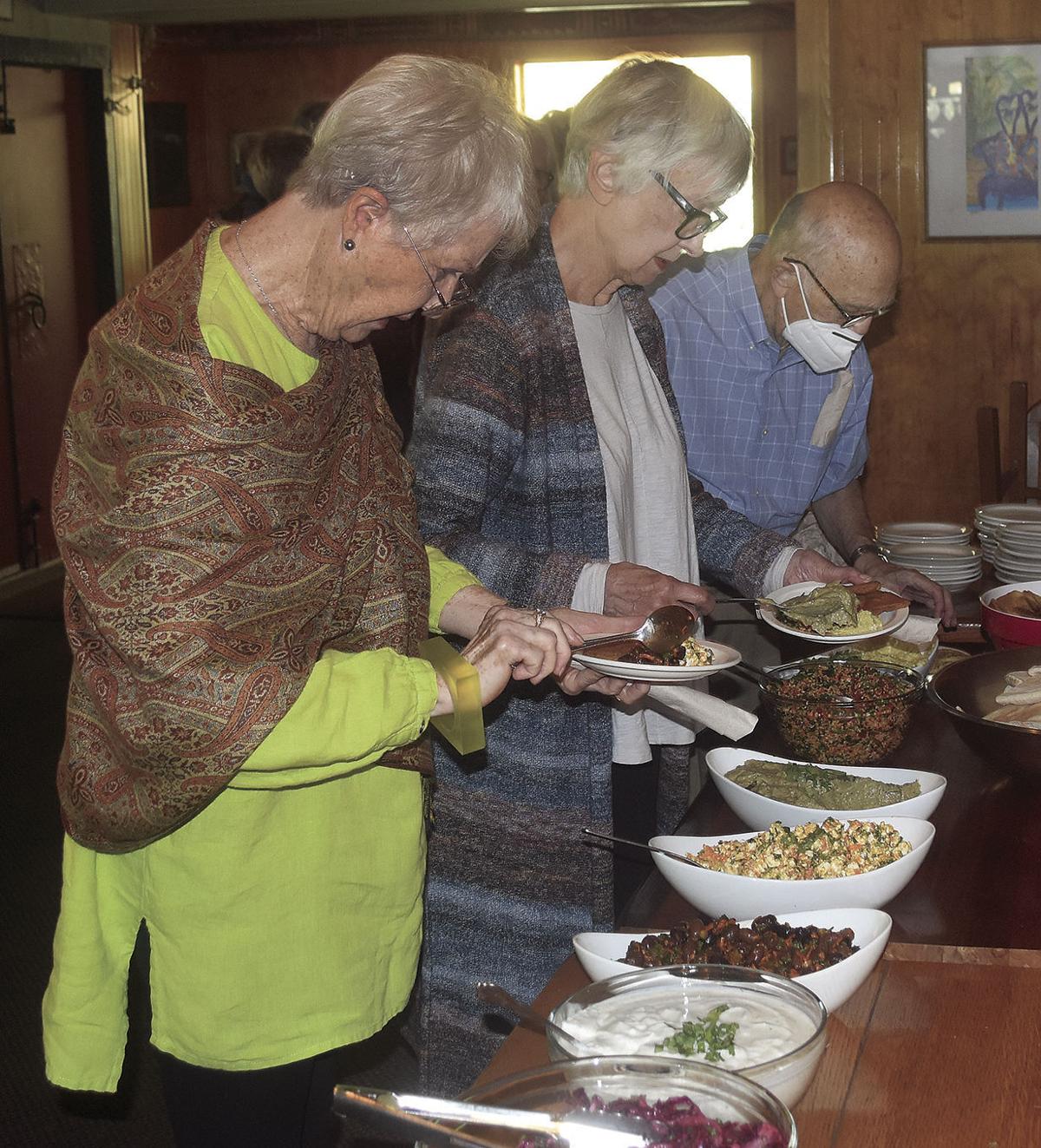 Lining up for some Cafe Gulistan specialities on Sept. 26.

Ibrahim Parlak (center) talks with Kris and Joel Klass at Cafe Gulistan in Harbert on Sept. 26.

Lining up for some Cafe Gulistan specialities on Sept. 26.

HARBERT — Michigan U.S. Senator Carl Levin, who served from 1979 to 2015, and passed away on July 29, 2021, holds a special place in the hearts of Ibrahim Parlak and many of his supporters.

They held a gathering at Parlak’s Café Gulistan in Harbert on Sept. 26 to honor his memory.

Parlak said during his 20-year struggle to remain in the United States, Levin became a close friend of the community … “always responding when we needed” and introducing a series of “private bills” that prevented Parlak from being deported.

In 2004 and 2005, when he was detained for 10 months in the Calhoun County Jail in Battle Creek as a “dangerous terrorist,” Parlak said Levin refuted that label and called him “a model immigrant” in the Senate, resulting in much better treatment for much of his time there. His release from federal custody was ordered in May 2005 by United States District Court Judge Avern Cohn.

“He was good member of our community, and somehow he’s still here with us,” Parlak said.

In one of the biggest victories of Parlak’s decades-long fight against deportation, Immigration Judge Katheryn Deangelis ruled in 2018 (based on the Convention Against Torture) that the Harbert restaurateur’s fear for his well-being if he were deported to Turkey was well-founded.

That 2018 ruling under the Convention Against Torture (CAT) was appealed by the Federal Department of Homeland Security (DHS) on Jan. 29 2020 – an appeal that is still working its way through the courts. If the CAT ruling is upheld, Parlak is protected from deportation to Turkey.

Parlak’s attorneys and supporters (including members of Congress U.S. Rep. Jan Schakowsky, D-Ill., and Fred Upton, R-Michigan) have spent the last few months exploring different options of ensuring he can stay in Harbert such as having his adult daughter, Livia Gazzolo, sponsor him as a first-degree relative; (a status already granted preliminary approval by the DHS pending his status changing from political refugee); or persuading the Biden Administration to withdraw the DHS appeal of the CAT ruling.

Joel Klass of Bridgman, who attended the Sept. 26 remembrance at Cafe Gulistan, wrote the following letter to “The family of Senator Carl Levin:”

I had the privilege of working directly with Senator Levin via phone calls after he retired from Congress. Although he was no longer in Washington, D.C., his efforts on behalf of our friend Ibrahim Parlak continued unabated. His tireless interest in seeking relief for Ibrahim through talking with friends and former colleagues impressed me as much as all the work he did for Ibrahim prior to retiring.

His interest in seeking justice for this immigrant, who has had no permanent legal standing in our country since he came here in the early 1990’s, was steadfast. Either he or a member of his staff always returned phone calls or came up with practical suggestions on the best course of action to pursue while Ibrahim fought to remain in this country. The fact that he took an interest in, and used his considerable influence in support of a man from whom he could garner no personal benefit, endeared him to me and many, many others. His focus was on justice; nothing more.

Yet he brought a warmth and true concern, tempered by a steady dose of what is practical, to all our discussions.

It is difficult to adequately express the gratitude felt by Ibrahim, myself, and many others who have supported Ibrahim since his arrest in 2004. The work done by Senator Levin is largely responsible for Ibrahim being able to remain in America while the immigration courts continue to pursue his deportation. Ibrahim has now lived here longer than he lived in his native Turkey.

This is his home and his community, where he is beloved by many.

I had always admired Senator Levin prior to my involvement in Ibrahim’s situation. His concern for others, his willingness to stand up for his beliefs regardless of political consequences, his no-nonsense approach to finding the truth are qualities that are becoming increasingly difficult to find these days, especially in politics: Senator Levin never wavered.

It was an honor to have known and worked with him for the brief time that I did. His was a life well lived. He was the best of what being an American is all about. He will be remembered with fondness and admiration, and serve as an example for living a worthwhile life.

Thank you for sharing Senator Levin with the rest of us.

Parlak has lived in the United States since 1991, after spending 16 months in a Turkish prison, charged with separatism. The U.S. State Department granted him political asylum in 1992, citing a probability of persecution if he returned to Turkey.

In July of 2004, after DHS officials accused Parlak of being a former member of a Kurdish nationalist group known as the PKK, he was arrested and held for 10 months in the Calhoun County Jail in Battle Creek, Michigan. A deportation order was issued by a federal immigration judge in December of 2004, but his release from federal custody was ordered on Friday May 20, 2005, by United States District Court Judge Avern Cohn.

The U.S. Sixth Circuit Court of Appeals heard his appeal of the Immigration Court’s decision in the fall of 2007, delivering a split (2-1) decision against Parlak in August of 2009.

In a strongly worded dissent, Judge Boyce Martin rebuked the immigration court proceedings in the Parlak case, calling it “a sad remnant of an era of paranoid, overzealous, error-riddled and misguided anti-terrorism and immigration enforcement that has now gone by the wayside.”

Parlak spent years seeking refuge under the CAT – an international law that protects refugees from being returned under threat of torture or death.