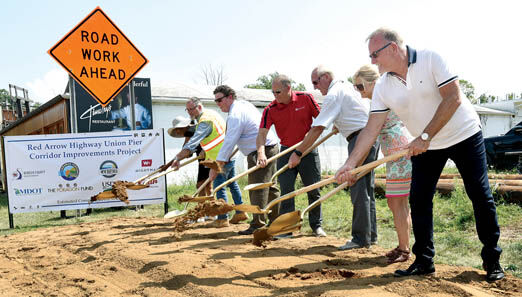 Shoveling some soil durung the Aug. 27 groundbreaking ceremony for the Red Arrow Highway Union Pier Corridor Improvement Project in Union Pier. The road and streetscape project, scheduled to be completed by next summer, will include 1.3 miles of road resurfacing, a non-motorized pathway, sidewalk improvements as well as new stormwater infrastructure, lighting and plantings. - photo by Don Campbell 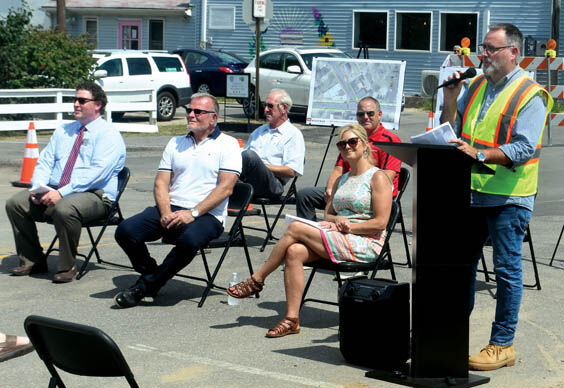 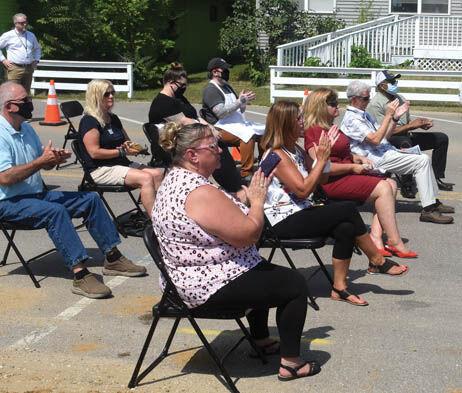 Applauding one of the speakers who participated in the Aug. 27 groundbreaking ceremony for the road project.

Shoveling some soil durung the Aug. 27 groundbreaking ceremony for the Red Arrow Highway Union Pier Corridor Improvement Project in Union Pier. The road and streetscape project, scheduled to be completed by next summer, will include 1.3 miles of road resurfacing, a non-motorized pathway, sidewalk improvements as well as new stormwater infrastructure, lighting and plantings. - photo by Don Campbell

Applauding one of the speakers who participated in the Aug. 27 groundbreaking ceremony for the road project.

“After two years of public engagement, extensive meetings, coordination of nearly every public utility in the county, we’re standing at the crossroads of a project that’s going to improve the safety, the quality of life and the image of one of our beloved hamlets in Chikaming,” said Chikaming Township Supervisor David Bunte at the groundbreaking ceremony for the project.

The project includes new public restrooms, 1.3 miles of road resurfacing on Red Arrow Highway along with some work on Town Line and Union Pier roads, a non-motorized pathway and sidewalk improvements, as well as new stormwater infrastructure, lighting and plantings at the intersection, which straddles the townships of New Buffalo and Chikaming.

The project also includes a three-lane section of roadway including a dedicated center left turn lane for business access and an activated pedestrian crossing system for east-west crossings of Red Arrow Highway.

The Aug. 27 ceremony was held on the road that is the dividing line between the townships. It is called Town Line Avenue on the west side of Red Arrow Highway and Union Pier Road on the east side of the highway.

Bunte called Union Pier a true beach community that is welcoming and neighborly.

“The improvements on Red Arrow will enhance the ability to access current businesses and residences, allow safe passage for recreation purposes and encourage small business development,” he said. “The strategic partnerships created during this process also lay the groundwork for some future opportunities and should be used as a benchmark for how communities can work together for the greater good.”

New Buffalo Township Supervisor Michelle Heit said the project couldn’t have been done without all of the governmental agencies working together.

She gave credit to Bunte, Latham and Kevin Stack of the Road Department, members of the County Commission, and both township boards.

“I want to thank the Union Pier business owners for their patience,” she said.

And Heit said the project was made possible by The Pokagon Fund Board, noting “I only wish that John Krsul was here with us today. He was truly excited about this project the minute they told him about it.”

Krsul, who had served as Interim Executive Director and Special Liaison to the The Pokagon Fund Board, passed away on June 11, 2020.

“We’re excited for the facelift that this is going to bring … so that the tens of thousands of travelers along Red Arrow Highway will get a sense of the true spirit of Union Pier and how unique of a community it is,” said Pokagon Fund Executive Director Dan Petersen said.

Berrien County Commissioner Ezra Scott, who represents the Union Pier area, said that while running for office in 2017, people told him something needs to be done at the intersection because it was dangerous. He said hundreds of people signed petitions asking for the intersection to be improved.

Shortly after Jason Latham was named the county’s new managing director of the Berrien County Road Department, Scott said he got him involved.

Latham said he soon had a “stack of letters” on his desk from business owners and residents all saying pretty much the same thing.

“The thread was ‘We need a safe environment … not only to drive, but to walk, to bike. We need to make Union Pier something special.’”

He said local officials were 100-percent on board from the get-go.

Latham said that during his 25 years working with roads, this is the first project in which there was so much intergovernmental cooperation.

“This is truly what it’s all about to be a public servant and to do our best,” he said.

He also said his team at the Berrien County Road Department is “second to none.”

Steve Carlisle, director of engineering and transportation with Wightman said road work (which began recently near Community Hall Road) is expected to continue until mid-November, focusing mainly on Red Arrow Highway, and resume next spring when the 10-foot wide pathway and streetscape improvements are set to be completed.

He said the Red Arrow Highway Union Pier Corridor Improvements Project was funded by the townships, along with by the Berrien County Road Department, the USDA Rural Development and The Pokagon Fund. When added together with the sewer and water work, the area is receiving close to $10 million of work, Carlisle noted.

Bunte said he looks forward “to being here in late May, early June of next year celebrating the completion of the streetscape, enjoying the face lift we’re giving Union Pier for generations to come.”

At a recent Chikaming Township Board meeting Bunte said the sewer portion of the project is slated to be completed in late fall.

He said sewer authority officials moved their project up by a year so the work could be done just ahead of the corridor improvements were done. That work started in April, and work in downtown Union Pier caused a detour until Red Arrow Highway re-opened to traffic in time for the Fourth of July weekend.

The construction zone for both road and sewer work has two-way traffic on Red Arrow Highway and a posted 35 mile per hour speed limit.