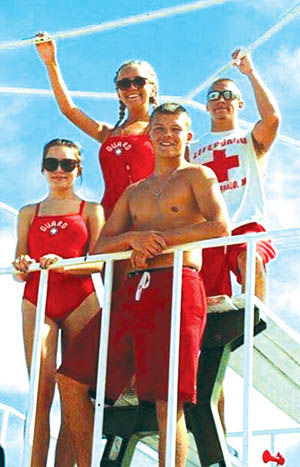 Watching the New Buffalo lakefront from a lifeguard tower earlier this summer (above, from left) are Kelly, Emily, Andrew and Jarvis Tarnowski. 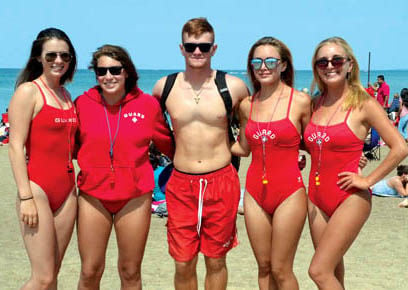 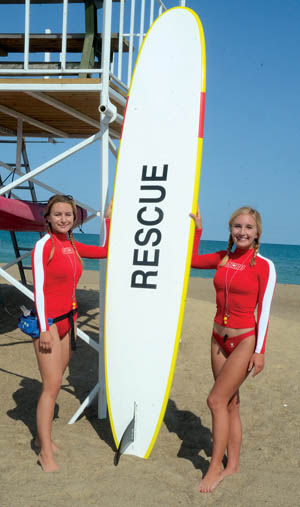 Kelly and Emily Richards prepare for a day of lifeguarding in New Buffalo. 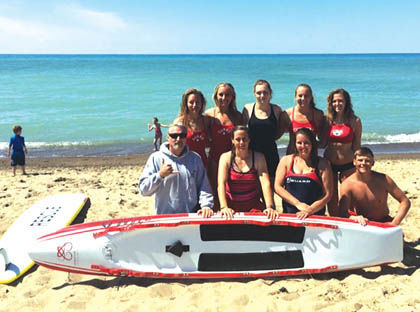 Watching the New Buffalo lakefront from a lifeguard tower earlier this summer (above, from left) are Kelly, Emily, Andrew and Jarvis Tarnowski.

Kelly and Emily Richards prepare for a day of lifeguarding in New Buffalo.

NEW BUFFALO — The lifeguard crew at New Buffalo’s public beach has been very busy this summer.

“My sister and I have rescued 17 people,” said 21-year-old Emily Richards while setting up for another day of guarding the beach on Friday, Aug. 25.

Earlier in the summer, Emily and Kelly Richards, 18, teamed up to bring two adult men (who happened to be brothers) back to shore.

“They were struggling trying to swim back from the sandbar. So both of us had to go out there and grab then between the buoys and the shoreline,” Emily said, adding that the men were more than twice their size.

“We got them back to shore, and then we had to call the medic because one was having trouble breathing,” she added.

Also on the 2017 New Buffalo lifeguard team (they’ve dubbed themselves “Baywatch’) are Andrew Coffeen, Dana Handley (now back at Valparaiso University), Jarvis Tarnowski (who worked at the beach most of the summer before New Buffalo High School football began) along with Jenn Giller and Jadah Esenaur (both Chesterton High School students).

Emily Richards said the 2016 season at the beach wasn’t nearly as busy as this year has been.

Cofeen (a senior at New Buffalo High School) agreed that it’s been a “pretty active” summer.

“They made us work for our money a little bit this season. I can’t complain about that, it keeps us on our toes,” he said.

Emily Richards noted that Tarnowski, also a student at NBHS, had a memorable rescue this summer.

“A teenage boy was trying to get to the sandbar, he could’t swim, and Jarvis jumped off of the lifeguard tower, ran into the water to save him, and pulled him back in in a matter of 30 seconds,” she said.

Emily said most rescues involve placing a buoyant tube under the swimmer’s arms, then the lifeguard puts their arms underneath the tube “and swim them in.”

She said both adults and children have been rescued from the waters of Lake Michigan this summer, but only a few have required first aid for injuries mostly sustained on or around the harbor breakwater rocks.

In addition to often warning beach-goers to stay off those rocks (and sometimes even the Coast Guard tower at the far end of the breakwater), Kelly said the lifeguards ask those setting up tents and umbrellas not to do so in front of the two lifeguard stands because it blocks their view of swimmers.

Emily said there have been quite a few days with big waves and rip currents this summer, with a few children “severely struggling” in the surf before lifeguards pulled them back to shore. She said it’s important for parents to keep an eye on their kids and put lifejackets on them.

“It’s easy for the to get swept away from just one wave. You can’t beat Mother Nature … know about lake rip currents and water safety. Education is so important,” she said.

Kelly said it’s not uncommon for children to fall off a boogie board or have waves knock their floaties off.

“We go in and either pick them up off the water or swim out to them with the tubes,” she said.

Emily and Kelly are originally from California, then lived in Chicago before coming to New Buffalo two years ago. They have been lifeguarding for 10 years and received lifeguard training through the Salt Creek Beach program in California.

Emily attends Hope College in Holland where she is on the swim team and an education major.

Kelly graduated from New Buffalo High School last June and will be going to the University of Illinois at Champaign-Urbana.

One of their highlights of the 2017 season has been getting Esenaur and Giller ready to become full-fledged lifeguards.

“We’re training them for waterfront lifeguarding,” Emily said adding that it’s rewarding to share their skills and watch the new lifeguards improve.

“They have leaned so much in the weekends they’ve worked here.”

“I like working on the beach. It’s a lot different tan working at a pool,” Esenaur said.

Giller credited her fellow lifeguards with making the job “enjoyable and more fun.”

Emily Richards said the Great Lakes Surf Rescue Project organization (including Bob Pratt and Dave Benjamin) has worked with the New Buffalo lifeguards on water safety issues such as board rescue techniques (which she has since used in actual rescues).

“It’s fun to learn from people that have the same passion for lifeguarding that we do,” she said.

The lifeguards as a group expressed how much they enjoy coming to the beach every day to do a job that can be incredibly rewarding.

“We have been able to say we’ve saved multiple lives,” Kelly Richards said. “It’s so crazy how at then end of the day I can say ‘I saved a 250-pound man. I saved a 50-pound child. It’s so amazing to say that.”