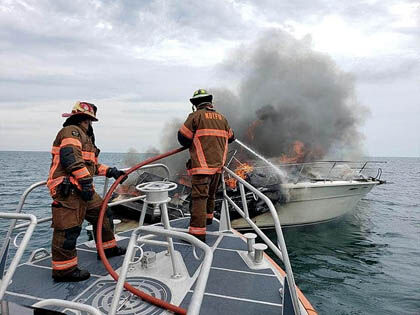 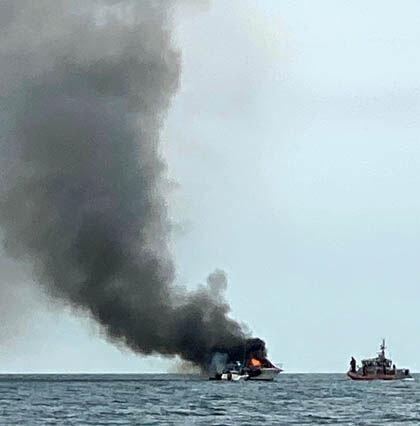 A scene of a boat fire in Lake Michigan off New Buffalo at about 1:45 p.m. Tuesday, July 21. Reports from the beach were that everyone on board got onto another vessel before the flames erupted.

A scene from the July 21 battle with a boat fire battle offshore in New BUffalo in a photo posted on the New Buffalo Police Department's Facebook page.

A scene of a boat fire in Lake Michigan off New Buffalo at about 1:45 p.m. Tuesday, July 21. Reports from the beach were that everyone on board got onto another vessel before the flames erupted.

A scene from the July 21 battle with a boat fire battle offshore in New BUffalo in a photo posted on the New Buffalo Police Department's Facebook page.

NEW BUFFALO — Ten people were rescued from their boat on Tuesday, July 21, just before the vessel burst into flames on Lake Michigan.

It happened shortly after noon about a quarter-mile off the New Buffalo Harbor, ac­cording to Petty Officer Alec Marable from the U.S. Coast Guard’s Michigan City sta­tion.

He said the people were aboard a recreational boat when it started smoking. A good Samaritan helped the people scramble off their boat into another one, and took them to land just before their boat burst into flames.

Marable said New Buffalo firefighters re­sponded in a New Buffalo Police boat, then got onto the Coast Guard’s boat to fight the fire.

Officials said the fire start­ed in the engine compart­ment, but they are not sure of the cause. The boat was destroyed.

Local resident Ryan Bryk said he was captaining the vessel (a 36-foot Sea Ray) with nine passengers aboard (including three of his children, his wife, his mother, and his brother accompanied by a daughter and fiancé) when the starboard motor began acting up. When he opened the engine hatch, flames were shooting out.

Bryk said a "nearby fisherman" approached and ended up "scooping us all up" and getting everyone safely to shore, "which was a blessing."

"He was just happy that we all were safe."

Bryk said he was able to get life jackets out from below deck and the fisherman handed him a fire extinguisher when he first arrived.

"I went back down the hatch into the boat and put the fire out the best that I could. I thought it was out," he said, adding that everyone got on the fishing boat and began the journey back to shore.

"By that time the New Buffalo (police) boat was on its way out and we were about 20 or 30 feet away from the vessel … they proceeded to the boat, Coast Guard met them out there, and within I'd say five to ten minutes the boat was fully engulfed."

With the exception of burning some of his fingers on a hatch during the incident, Bryk said everyone emerged safe and healthy.

"It was a very scary moment for a new captain of a boat," Bryk said, adding that his training had taught him to remain calm, get everybody in their life jackets and off the boat.

Machinery Technician 2nd Class William Schackmuth with the U.S. Coast Guard’s Michigan City Station (who supplied photos from the incident) said all the people aboard the boat were wearing life jackets.

Police also sent "a big thank you to the Good Samaritan who helped evacuate the boat prior to arrival, you are a true hero!"