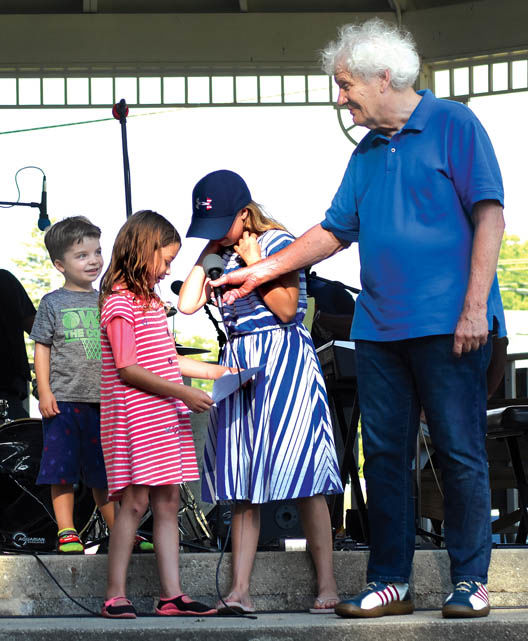 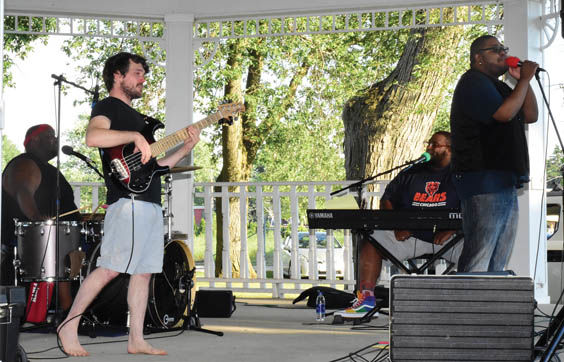 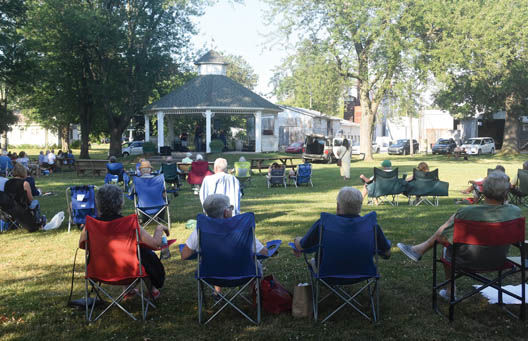 THREE OAKS — Dewey Cannon Park was filled with the sounds of poetry and music on the Fourth of July.

The Poetry Board of the Village of Three Oaks and Harbor Arts introduced new Poet Laureate Ayla Batton of Three Oaks while also bestowing the title of Young Poet of Three Oaks for the Year 2020 to Julianne Prangley of Grand Beach.

He said poets seeking the 2020 title were asked to write a poem about the Fourth of July.

Turner said the letter accompanying 7-year-old Julianne Prangley’s entry "July 4th" stated: “I entered this poetry contest because my heart told me to write this poem.”

Julianne read her poem with help from her brother, 4-year-old Pierce, and sister, Elise, 10, as follows:

You hear fireworks lighting up the sky

You smell the hot dogs on the barbecue

You feel happy because you are loved

America you are beautiful!

Turner said there were 31 entries for the title of Poet Laureate representing an extraordinary number of gifted and talented people.

Batton, who has been writing poetry for about 10 years, said it’s an incredible honor to be chosen and “to be able to use poetry to have a voice and speak my voice is something that I’m very grateful for,” before sharing her Fourth of July poem — “Promises of a Better Someday”

at the solemn flag,

still in the night.

She wonders about tomorrow.

The grown-ups share a meal and stories around the fire,

illustrating their lives in flashes of memory

Her mother brought peppers to give

alongside the wine and tales about before,

carried all those countless steps

to flourish here in the Michigan summer.

Her eyes shine as she speaks softly

into the warm fragrant night

of family homes and dancehalls,

of grief and the glittering tides that now

exist only in the past,

on the other side of the world.

The girl remembers her mother telling her

the flag hanging from their porch

was a gift from the neighbor

to welcome them to America.

The woman had said,

people who are not the same

to create something more

than a nation of strangers.

the neighbor tells the girl a story about her own father,

a veteran of the Second World War

and how she would beg him to bring his fiddle out

to break the long stretches of silence

that blanketed their home.

When he died, she found a memory

folded at the bottom of a drawer:

a flag with only forty-eight stars

and a letter from a man

whose name she did not know,

full of passion and pain and

promises of a better someday.

She tells the girl,

we can only truly know

when they choose to speak.

The woman had hung the flag on the wall

and framed the letter.

The girl is perched on her mother’s shoulders,

a familiar island in a sea of unknown.

The steady chanting of the crowd

is the heartbeat of summer.

They slowly wind their way

past the shops and houses.

It all looks so different to her

from here on the street.

In front the old museum,

the sun is shining through the flag

She watches it proudly unfurl with a sudden pop

as the fabric snaps against itself.

She can almost hear it

roaring in the wind.

The red and blue never looked so alive

as they do now,

here in the street,

where the girl’s small body

reverberates to the beat around her

and a deep understanding of

this is what we do

blooms inside of her,

in a river of voices

waiting to be heard

asking us to remember:

Both poets received honorariums ($100 for the Young Poet and $500 for Poet Laureate) and framed certificates.

Following the poetry readings Harbor Arts Board President Dave Knoebber introduced the Andrew Fisher Quartet for the July 4 session of Music in the Park 2020.

Before beginning the band’s set, Fisher said it was the band’s first performance in quite a while, joking “it’s probably been 20 years ago.”

Music in the Park is a free concert series held at 6:30 p.m. Saturdays during the summer in Dewey Cannon Park. The remaining 2020 schedule follows:

• July 11 - Cielita Londo - With a fresh look and youthful energy, the Lucero family plays traditional mariachi instrumentation to perform both traditional and non-traditional music of Mexico, Latin America and the U.S.

• July 18 - Located adjacent to the park, the School of American Music will perform from the gazebo this year with performances by some of their brightest star students, including an award winning piano graduate, two soprano award winners, and there may be a cameo from a local celebrity.

• July 25 - Modern Vultures is a genre - bending group from Southwest Michigan that performs a mix of cover favorites original material.

• Aug. 8 - The Fauxgrass approach to music, original and traditional, has quickly landed them a place in the progressive bluegrass community since their 2011 inception.

• Aug. 15 - David Lahm is not new to Three Oaks or Harbor Arts. His Open Mics have become a tradition in Harbor Country and this season he teams with Steve and Mary E to bring cabaret Jazz to the park.

• Aug. 22 - The The Henhouse Prowlers bluegrass quartet has been to more than 25 countries incorporating music from Africa, Asia, the Middle East and more into their already robust repertoire of traditional American music.

• Aug. 29 - Playing a wide variety of styles and genres gives Stealin The Farm the ability to perform each show uniquely, ensuring an engaging evening for both the band and listeners.

• Sept. 5 - To close our season we welcome The Newports, performing their eclectic mix of blues, rock, and soul with a distinctive Chicago vibe.

Check the www.harborarts.com/music-in-the-park website for the most current information and any changes to the schedule.