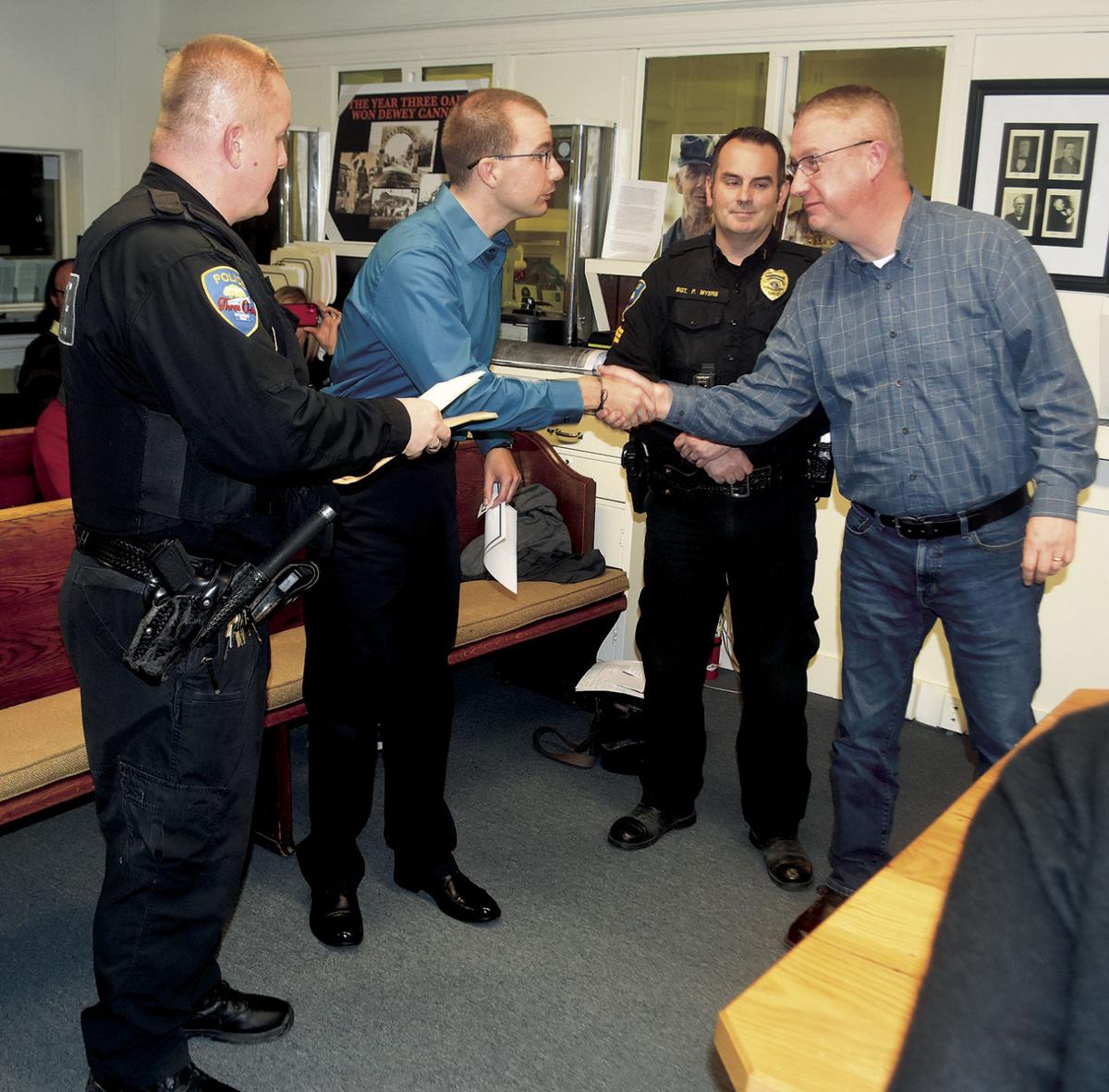 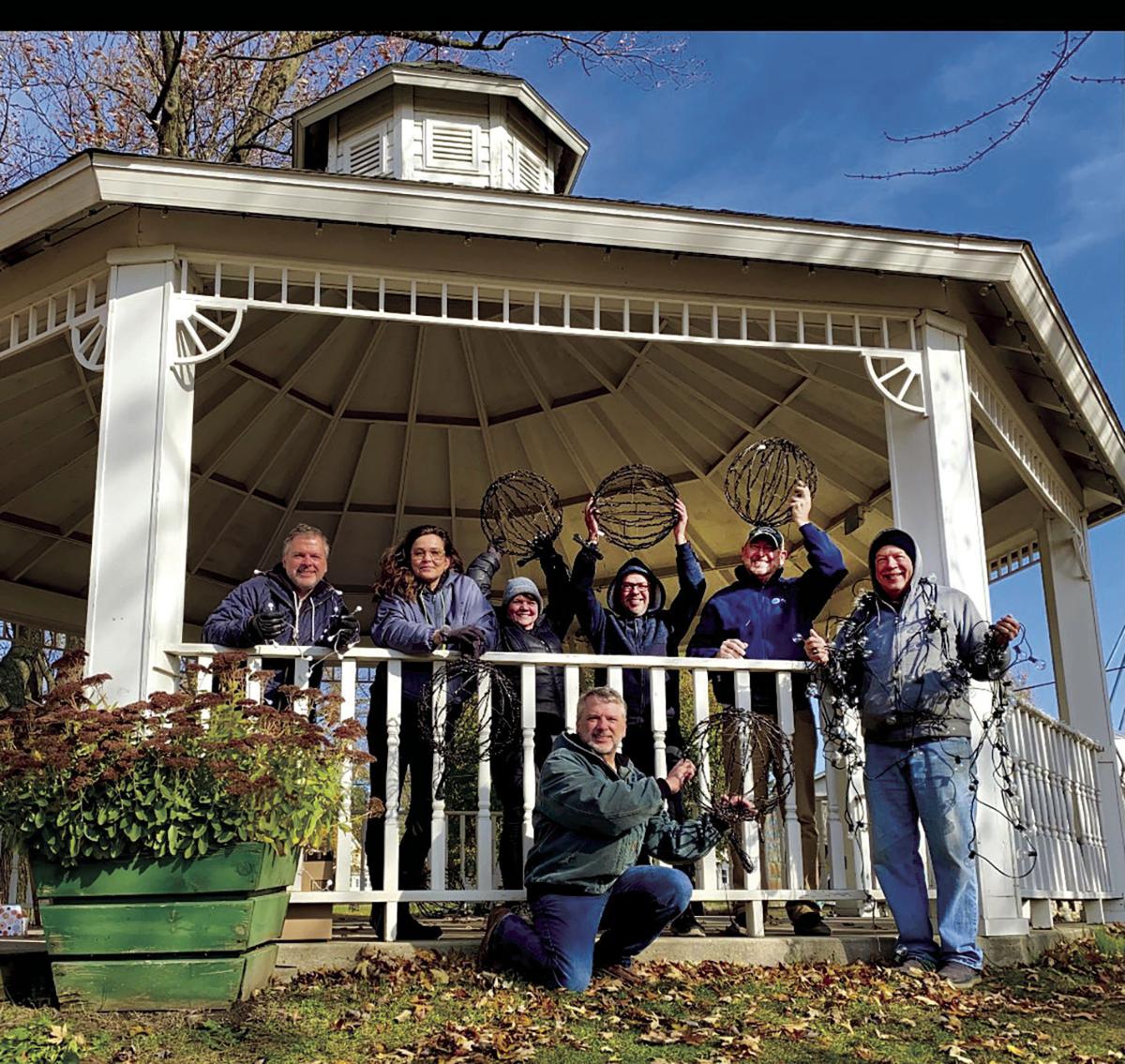 Police Chief Karl Krause said on Sept. 25, 2021, Officer Klynstra was dispatched to the Journeyman Distillery for a medical emergency. When he arrived, bystanders were performing CPR on Brian Planbeck.

“Officer Klynstra hooked up the AED (Automated External Defibrillator) and a shock was advised, and the individual was transported to the hospital where he ended up having quadruple bypass surgery,” Krause said.

“The last thing I remember from that night was dancing next to my family at my niece’s wedding in Three Oaks. After waking up in the hospital, I was informed that I had collapsed on the floor from a heart attack. If it wasn’t for Jacob’s fast response I would not be here today. I can only describe that night as a miracle.”

Joanna Welter, co-owner of Journeyman, told Klynstra “We at Journeyman think you’re definitely a hero to us. We’re still in awe of your quick action, and ultimately saving a gentleman’s life.”

Later in the meeting, it was announced that Klynstra had completed his radar training and can now issue speeding citations.

Also on Nov.10, the Village Council was informed of plans for this year’s Snowflake Stroll festivities and business open houses from 2 to 8 p.m. on Saturday, Nov. 27.

A 5 p.m. parade from Maple Street to Linden and Oak streets (including emergency vehicles, local children, Santa/Mrs. Claus, and possibly other special guests) will precede a tree-lighting ceremony. The Village Council approved a brief street closure for the procession during its Nov. 10 meeting.

Also on tap is an ice sculpture to be located near the kaleidoscope downtown.

Later in the meeting the placement of a Three Oaks Michigan sign in the lighted Dewey Cannon Park gazebo for the holidays was authorized by the council.

Council member Tyler Ream said the village will pay the first $50 per tree, as it currently does.

In other Nov. 10 business, the Three Oaks Village Council:

Agreed to spend up to $5,000 to replace a water service line to a village residence where lead was detected over the mandated action level.

Were asked by Nick Sayers of HH Three Oaks/Sunset Coast during a public comment period to clarify the reasons for its decision not to award a retail marijuana business license to the applicant, adding that it is within the council’s power to “rectify the situation.”

Were told by Village Manager Dan Faulkner that a grant for a project to install a concrete sidewalk along U.S. 12 from the existing one near the Ford dealership and the manufactured home park has been approved.

Voted 7-0 to contribute $300 to the Three Oaks Community Garden, which Ream said is in the process of rebuilding its beds and also has received a $2,500 donation from the Three Oaks DDA.

Made the following appointments – Dave Thomas, Chris Brooks and TJ Jarrett to the Construction Board of Appeals; Joan Brown and Lindsey Clements to the Parks and Recreation Board; Tina Olson and Steve Diller to the Planning Commission; Mike Kennedy to the ZBA.

Scheduled a special meeting for Nov. 11 to accept invoices, disbursements, prepays and payroll, which weren’t ready in time for the Nov. 10 session.