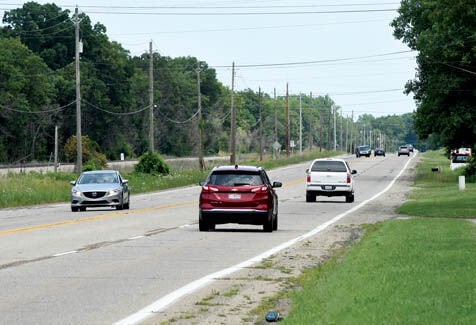 The section of U.S. 12 in New Buffalo Township between the Indiana-Michigan state line and the New Buffalo City limits was converted back to four lanes last week, ending a temporary three-lane road diet experiment. 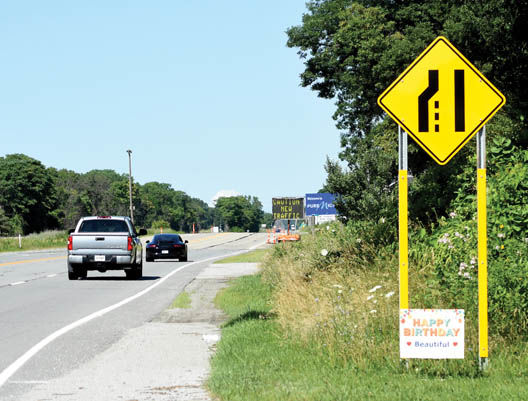 Heading toward the U.S. 12 trial road diet zone from the Indiana side of the state line on July 13.

The section of U.S. 12 in New Buffalo Township between the Indiana-Michigan state line and the New Buffalo City limits was converted back to four lanes last week, ending a temporary three-lane road diet experiment.

Heading toward the U.S. 12 trial road diet zone from the Indiana side of the state line on July 13.

NEW BUFFALO — The road diet experiment on U.S. 12 in New Buffalo Township turned out to be short-lived.

During a Wednesday, July 8, special meeting the New Buffalo Township Board voted 4-1 (supported by Township Supervisor Michelle Heit, Treasurer Jack Rogers, Trustee Pete Rahm and Trustee Patty Iazzetto, and opposed by Clerk Judy Zabicki) to request that the Michigan Department of Transportation (MDOT) “return U.S. 12 to its original pattern as soon as possible” while noting that the Township Board “does not support MDOT moving forward with a permanent road diet in 2021 coinciding with the resurfacing of U.S. 12.”

The motion cited “numerous complaints from township residents concerning the trial road diet” received by the board and also states: “during the implementation of the temporary road diet MDOT failed to use the proper safe signage to alert motorists of a change in travel patterns … (and) MDOT failed to properly mark and restrict travel in the lane that was being removed, causing confusion for those traveling west on U.S. 12 … (and) MDOT failed to properly cover the old lines on the roadway causing new lines to be difficult to see.”

Heit said, according to feedback township officials have received, “it’s overwhelming the number of residents (and others) that are driving this highway every day and oppose this” (she noted that there had been 45 emails received opposing the road diet and 11 in favor).

Heit noted that it’s up to MDOT whether it conducts a traffic study in the three-lane area between the New Buffalo city limits and the state line later this month (dates given during the July 8 meeting for that traffic study were July 29 and Aug. 1). It’s also MDOT’s call on whether to leave the three-lane setup in place for the rest of the year (or permanently via the 2021 resurfacing project) or go back to four lanes.

Rahm said three miles of no passing lanes and slow moving traffic (especially in the winter) will make people tempted to pass in the turn lane. He said four lanes are there because of the traffic.

Zabicki said the three-lane design works on M-63 and Niles Avenue St. Joseph. She also said from 2015 to 2019 in the month of June there were seven crashes on U.S. 12 (one was a fatal and three caused injuries).

Iazzetto said she travels U.S. 12 from the Grand Beach area to New Buffalo on a daily basis, adding that the lack of turn-off lanes in certain areas is a concern. She also noted that school bus stops will take place along the road once classes resume.

“It does not feel like it is going to work in my mind. It is just going to be a big problem for the community.”

Heit said during a recent meeting with representatives of MDOT she asked that they either take the road diet trial out and/or make it safer with better signage and cones the entire route.

“They did put these things in place almost right away, and it did help,” she said, although she later said if they couldn’t do it correctly “they shouldn’t have done it in the first place.”

On Friday, July 10, Heit shared the following email she received from MDOT regarding U.S. 12:

“Thank you Michelle. As soon as I am aware I will notify you when the contractor will be out to re-stripe. We are moving forward designing the project next year at the current 4 lane configuration.”

Berrien County Commissioner Ezra Scott re­ported during the Thursday, July 16, Ber­rien County Board meeting that the temporary road diet had  ended for the 3.5 mile section of U.S. 12 be­tween the state line and city of New Buffalo.

Scott said workers from the Michigan Department of Transportation had re-striped that section of highway from three lanes back to its original four earlier in the week.

MDOT had restriped that section to three lanes in May and planned to study this month how it was working out. But Scott said many people didn’t like it and complained.

“It was just a debacle in how they got the cones out and the striping and the signage and everything,” he said.

There were numerous public comments during the July 8 special Township Board meeting including:

• Robert Kemper noted that he rides his bike on U.S. 12 between Grand Beach and New Buffalo (as well as on adjacent streets such as Wilson Road) and said he is a supporter of the road diet, “at least from the section of New Buffalo south to the state line.” Kemper also said he was not happy with the implementation of the temporary road diet and said “the worst three lanes” were chosen.

He also relayed a message from the Friends of Berrien County Trails that they would like the trial road diet to stay in place until MDOT can conduct the traffic study set for July 29 and Aug. 1.

• Marcy Hamilton said she has been working with the Township Board, the New Buffalo City Council and the Berrien County Road Department on the Marquette Greenway project for several years, adding that more than $3 million has been raised, with organizers recently informed of a large state submission.

Hamilton said that if the road diet doesn’t work out in the township (where it currently exists in trial form) there won’t be room for the Marquette Greenway, adding that the current blocked off lane on the lake side of U.S. 12 wouldn’t be the Greenway trail or a bike lane.

She said the lane would be totally removed and the trail would be 16 feet from the edge of the roadway, separated from traffic (and the Amtrak tracks on the other side) by a green buffer.

• Mark Robertson said MDOT did a terrible job of implementing the trial road diet and took issue with the design being safer than it’s former set-up.

He also said waiting until the end of July to do a study “is unbelievable to me.”

• J.V. Peacock said the Marquette Greenway would link “the most major population area we have in the Midwest” to Harbor Country where the main industry is tourism with the potential to increase revenues for small businesses, bring new people to the are, increase real estate values and sales.

“This is a golden opportunity. If we let this go it will be a real shame,” he said.

Peacock said he hopes the statistics on the road diet can be compiled, adding “I think you’d all be amazed at how much danger there is … on a four-lane road.”

• Kate Mell said she uses Highway 12 almost every time she drives and said traffic and turning are worse under the road diet, adding that she recently was turning left onto Wilson Road in the turn lane and had a truck using the lane to pass another vehicle coming “right at me.”

“It isn’t working … I think it’s dangerous and I don’t know what the rules are, I don;t think anyone does.”

• John Chipman said three-lane design has ben proven to be a safer solution in the long run. asked board what it can do to get proper information from MDOT.

• Tim Rogers sent a message stating that even with a longer study this is a dangerous change to a highway and an emergency route.

• Mary Robertson said she feels it’s very dangerous on U.S. 12, and she has heard of many near misses. She noted that many of those using the highway are tourists who don’t have time to adjust to the design.

Heit later said the Marquette Greenway is a separate issue.

“I support the Marquette Greenway, but not at the expense of safety,” she said, adding “We’re going to have to find another way.”

— Louise Wrege contributed to this report