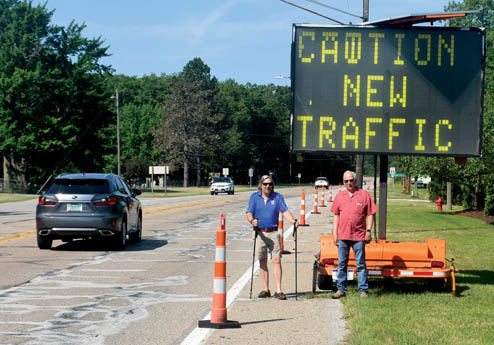 J.B. Hoyt and Gary Wood stand under a sign alerting motorists heading into the demonstratiion road diet on U.S. 12 of the new three-lane traffic pattern in place to the state line.

J.B. Hoyt and Gary Wood stand under a sign alerting motorists heading into the demonstratiion road diet on U.S. 12 of the new three-lane traffic pattern in place to the state line.

NEW BUFFALO — Admitting that the temporary road diet on U.S. 12 in New Buffalo Township got off to rough start, the Friends of Berrien County Trails group is seeking to keep the three-lane set-up in place until the Michigan Department of Transportation (MDOT) can conduct a study of roadway traffic both during the week and on a weekend in late July.

According to a Friends of Berrien County Trails press release, the road diet demonstration project "was not properly executed" in early June, "leading to confusion, uncertainty, near-misses and understandable consternation on the part of residents."

"After review," the release continues, "MDOT understood those concerns and has since greatly improved the demonstration project from the New Buffalo City Limits to the Indiana State Line. These improvements include clear blockage of the fourth lane and signage indicating the shift from four four lanes to three. Because a number of residents have expressed their concerns to New Buffalo Township officials, those officials are understandably uncomfortable with the MDOT demonstration project."

During a Wednesday, July 8, special meeting the New Buffalo Township Board voted 4-1 (supported by Michelle Heit, Jack Rogers, Pete Rahm and Patty Iazzetto and opposed by Judy Zabicki) to request that MDOT "return U.S. 12 to its original pattern as soon as possible" while also stating that the Township Board "does not support MDOT moving forward with a permanent road diet in 2021 coinciding with the resurfacing of U.S. 12."

The motion cited "numerous complaints from township residents concerning the trial road diet" received by the board.

Township Supervisor Michelle Heit noted earlier in the meeting that it's up to MDOT whether it conducts the study later this month (dates given during the meeting for that traffic study were July 29 and Aug. 1).

On Friday, July 10, Heit said she received the following email from MDOT regarding U.S. 12:

"Thank you Michelle. As soon as I am aware I will notify you when the contractor will be out to restripe. We are moving forward designing the project next year at the current 4 lane configuration."

Gary Wood and J.B. Hoyt, both founding members of Friends of Berrien County Trails, talked about the situation near the spot where four lanes in the City of New Buffalo become three in the township on July 3.

Wood said there has been a lot of push-back from the community due to the demonstration road diet lacking proper signage and cones at the start. He said MDOT has corrected the issues, with cones blocking off the empty lane on the lake side and digital signs at both ends.

Wood said the MDOT study (expected to take place in late July on a Thursday and a Saturday) would yield valuable data allowing local officials to compare the pros and cons of a three- and four-lane design.

According to the Friends of Berrien County Trails release, the study will focus on: 1. Changes in traffic volume; 2. The number of trucks utilizing U.S. 12; 3. Wait times for left turns on to U.S. 12; and 4. Determining the need for a traffic signal at Grand Beach Road."

According to the Friends of Berrien County Trails. data from a number of studies across the country have shown that a three-lane roads has 19 percent to 47 percent fewer crashes than on a four-lane highway, noting that roadways in Berrien County and across Southwestern Michigan have been reduced from four lanes to three quite include Lakeshore Drive from Stevensville to St Joseph and Blue Star Highway in South Haven.

With a total repaving of U.S. 12 in the city and township slated for 2021, local units of government will have to sign a resolution of support (probably by late this year) indicating their preference of the three-lane design. No action will leave the highway at four lanes. Currently the road diet design is in place on the township portion of U.S. 12 while the four-lane setup remains in the City of New Buffalo.

"We strongly urge New Buffalo Township officials to be patient with this process for the next 30 to 60 days so the proper data can be gathered, analyzed and presented to them and to the public," the Friends press release states. "Should this data show the anticipated improvements in traffic safety and traffic volumes then township officials should provide their full support to MDOT for execution of a repave and reconfiguration as a three-lane roadway during 2021."

A graphic supplied by the Friends of Berrien County Trails group shows that the three-lane road diet design includes an eight-foot green space between the traffic lanes and the proposed 10-foot wide Marquette Greenway paved trail located toward the Amtrak rails (starting at the Grand Beach Road access to U.S. 12 — before that it would run on that road to the state line).

If the repaved U.S. 12 remains at four lanes in the township, the Marquette Greenway won't fit and a "plan B" currently doesn't exist due to the Amtrak right-of-way and the many private landowner permissions needed closer to the lake. There is enough right-of-way room in the city to co-exist with either road design.

The City of New Buffalo portion of the Marquette Greenway would be located along U.S. 12 in town (with either a new 10-foot wide path or expanded sidewalks) before proceeding to Willard Street where it will make a left turn, eventually going right on  Mechanic to a trailhead at Smith Street featuring parking, seating, a map and bike racks.

Hoyt said the Marquette Greenway is seen as part of a trail system that would ultimately reach from Chicago to the Mackinac Bridge. He said currently there are gaps in Berrien County (which would be partially filled by the County Parks plan for "linear" trails to connect its parks).

"It's going to take a long time to build this out, but pieces of it are alive and well," Hoyt said, later adding that such facilities would boost local economies.