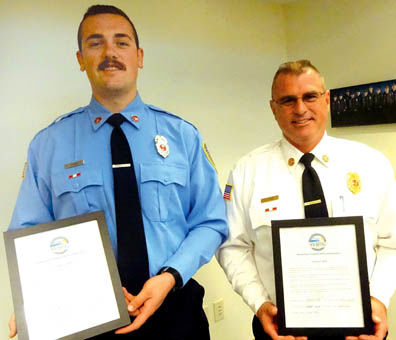 A rendering of the proposed fire and police station.

A rendering of the proposed fire and police station.

NEW BUFFALO – Updates on two new community facilities — a public safety building and a YMCA daycare and community center — were presented to the New Buffalo Township board during its Tuesday, Oct. 22, meeting.

The meeting was delayed from its normal Monday scheduled date due to the widespread power outage the previous day.

A site plan and preliminary drawings for the township’s new public safety building were presented by Chris Brooks of Brooks Architecture in Stevensville. With construction slated to start in the spring of 2020, the new 6,500-square-foot building will be built on the recently acquired 13-acre site near the current township fire station between Wilson and Lubke roads.

The new facility will house a three-bay fire station with lockers and equipment room, office area and large meeting/training room. A two-bay police facility will house the New Buffalo Township Sheriff’s unit currently based at Wilson and Kinst roads. This section will include an office, interview and squad rooms, lockers, armory and evidence room.

Entrance to the fire equipment bays will be set back from Red Arrow Highway, with appropriate signage and warning lights, according to Brooks. The police vehicles will enter on the side of the L-shaped building, with additional parking on the side and in the rear.

Township Supervisor Michelle Heit thanked Brooks for his work, saying he had “nailed it.” Brooks said they had previous experience in designing the Benton and St. Joseph Township facilities.

The board then received an update on the Community Center from Katie Maroney of Equilibrium Fitness in New Buffalo and Three Oaks and president of New Buffalo Business Association, and Zech Hoyt, executive director of youth services at the YMCA of Southwest Michigan. The pair led the Community Center Advisory Committee which grew from a needs assessment study conducted by The Pokagon Fund. The study identified the need for a facility to provide child care and possibly expanding into sports programs using existing parks and facilities.

They announced that a fundraising campaign will kick off in early 2020 with the goal of raising $1.6 million to fully implement a community-based YMCA center to be opened in the parochial school building behind St. Mary of the Lake Church in New Buffalo.

The Y will manage the development of a daycare center with a targeted opening date of March 2020. Future plans also include health and wellness initiatives, fitness classes, a workout facility and a gymnasium for sports programs.

Hoyt described the area as a “desert for daycare for infant and toddlers in quality and quantity.” He said a survey had identified 29 families who are interested. He mentioned the particular needs of the area’s seasonal and second-shift workers.

During an Oct. 28 presentation to the New Buffalo City Council (that meeting also was postponed by the power outage), Hoyt said Head Start could have students “in their seats” at the site as early as Nov. 18. He added that a special use permit is being sought to allow the YMCA to “do some care right alongside Head Start.”

In other Oct. 22 Township Board business, the board presented plaques of commendation the life-saving measures performed by Fire Chief James Flick (also acting Grand Beach Police Chief) and New Buffalo Township Firefighter Hunter Giannetti on the evening of Sept. 3 to save the life of Michael Hughes who was suffering cardiac arrest. The pair were cited for using their training and quick action and response to the scene.

Also on the agenda was approval to request $950,000 from The Pokagon Fund to be used for the township’s portion of  an upcoming $4.2 million improvement project at the Union Pier intersection of Red Arrow Highway and Union Pier/Townline roads. Heit explained that $200,000 would be used to purchase property west of Red Arrow Highway to be used for a trailhead with parking and restrooms.

Also participating in the intersection project are Chikaming Township and Berrien County Road Commission. Progress of the project can be followed from link on the township’s website at www.newbuffalotownship.org.

At the recommendation of both the township and Berrien County Planning Commissions, the board approved revisions to the township’s design standards for landscaping businesses and added a new definition of excavation businesses as a permitted special land use in C-2 and industrial zoning.