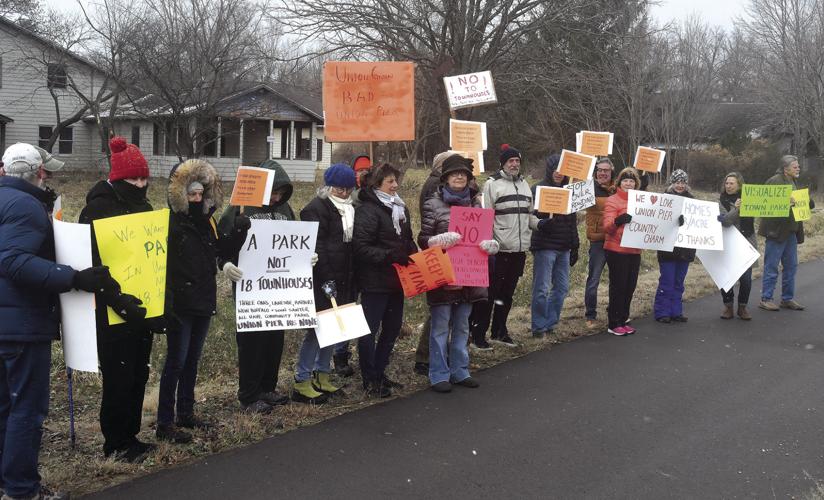 ABOVE: Protestors line up in front of the proposed site of the Union Green development on March 26.

RIGHT: Crossing the road while bearing messages in downtown Union Pier on March 26. 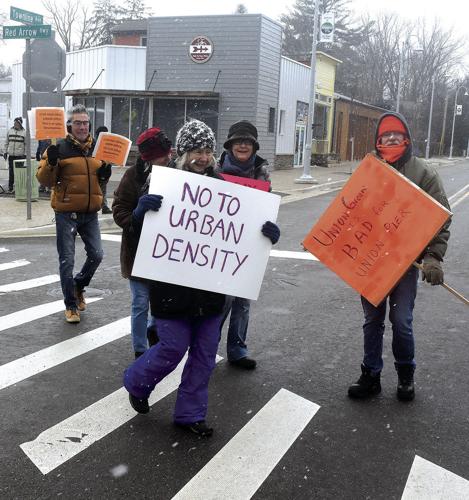 Crossing the road while bearing messages in downtown Union Pier on March 26.

ABOVE: Protestors line up in front of the proposed site of the Union Green development on March 26.

RIGHT: Crossing the road while bearing messages in downtown Union Pier on March 26.

Crossing the road while bearing messages in downtown Union Pier on March 26.

UNION PIER — More than 20 people gathered in Union Pier on the winter-like morning of Saturday, March 26, to protest the proposed Union Green development in Union Pier.

Many carries signs bearing messages like “A park not 18 townhomes” and “We love Union Pier country charm.”

She said “the magic of this place” is its small houses and quaint neighborhoods.

Koenigsberg added that many in the community would like to see the property at the corner of Red Arrow Highway and Goodwin Avenue used as a park.

“Every small town here has a city park. We don’t have one,” she said.

Conrad Murkey said he doesn’t want to see an urban development go up in Union Pier.

“It just does not fit with the character at all.”

Basia Klincewicz said she ’s ben a resident of Union Pier all of her life and sees it as an escape from the urban setting.

“If everyone’s talking about climate change it’s time to do something about it and not just talk,” she said. “There are regenerative planning ideas, restorative ideas floating around … many sites have been restored to their natural habitat.”

On March 15, The Chikaming Township Zoning Board of Appeals (ZBA) unanimously rejected a variance request for the proposed Union Green development related to commercial first-floor requirements of the “Union Pier Corridor” portion of an overlay zoning district.

On Feb. 9 the Chikaming Township Planning Commission by a 4-1 vote had approved a site plan for the proposed development composed of 18 residential units and a “live-work” space at the corner of Red Arrow Highway and Goodwin Avenue that included as one of its stipulations seeking the variance from the ZBA.