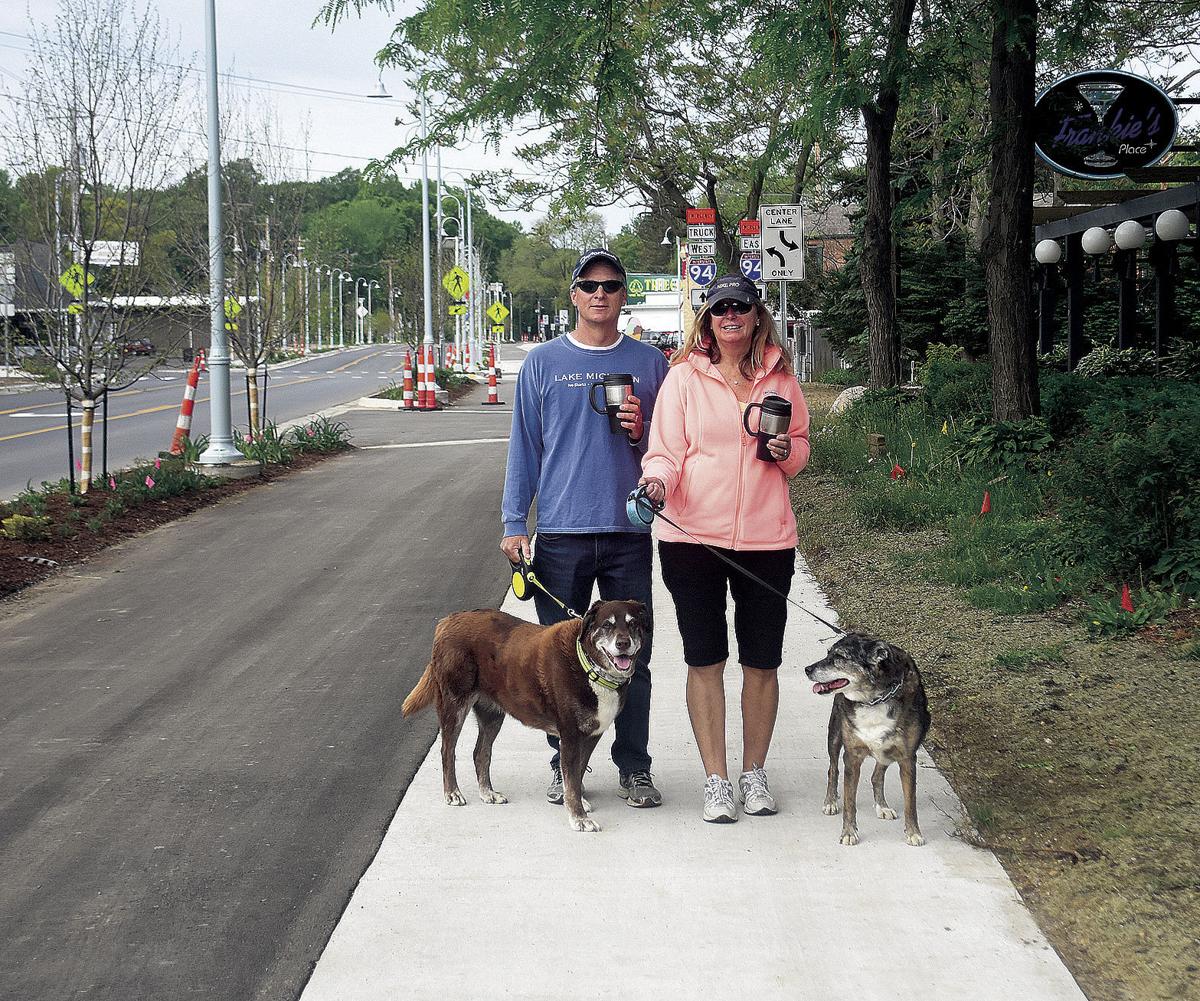 Pat and Lori Harrington walk their dogs, “Tucker” and “Bailey,” on the new pedestrian-friendly Union Pier streetscape along Red Arrow Highway on the morning of Monday, May 31. 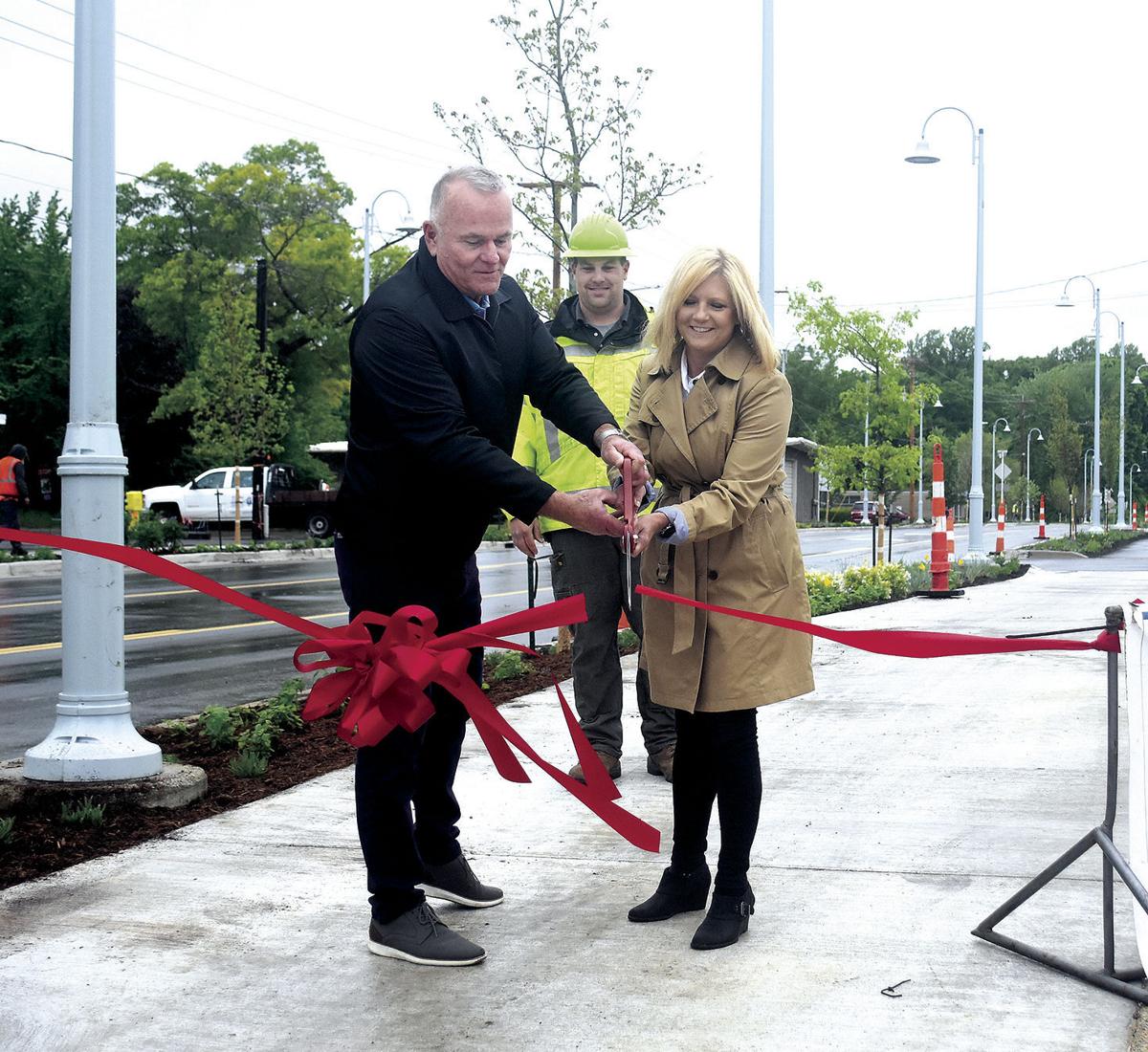 David Bunte, Kevin Stack and Michelle Heit (from left) during the May 28 ribbon-cutting ceremony for the Union Pier Red Arrow Highway Corridor Improvement and Streetscape Project. 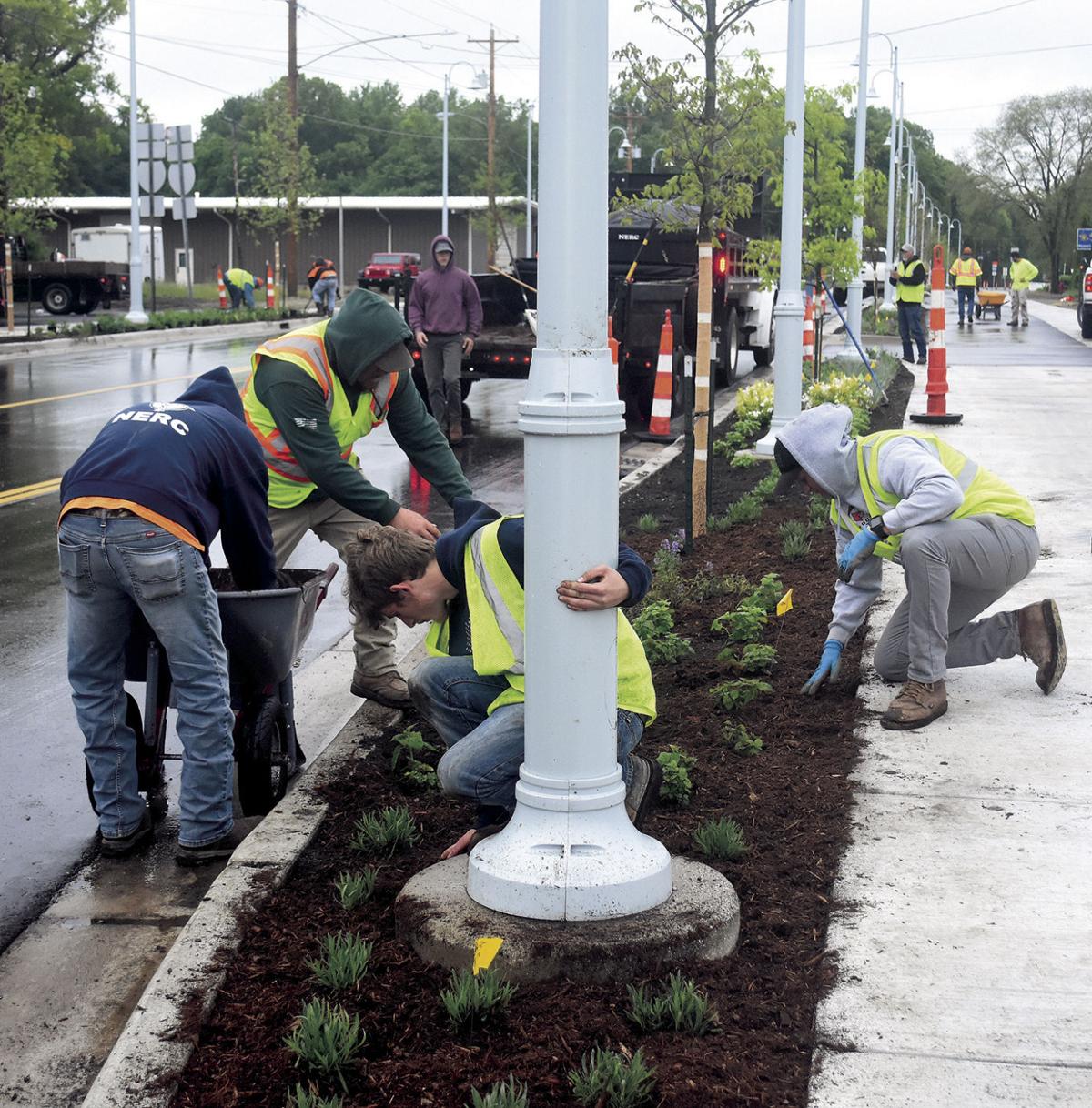 Adding plants to the Union Pier streetscape project on May 28. 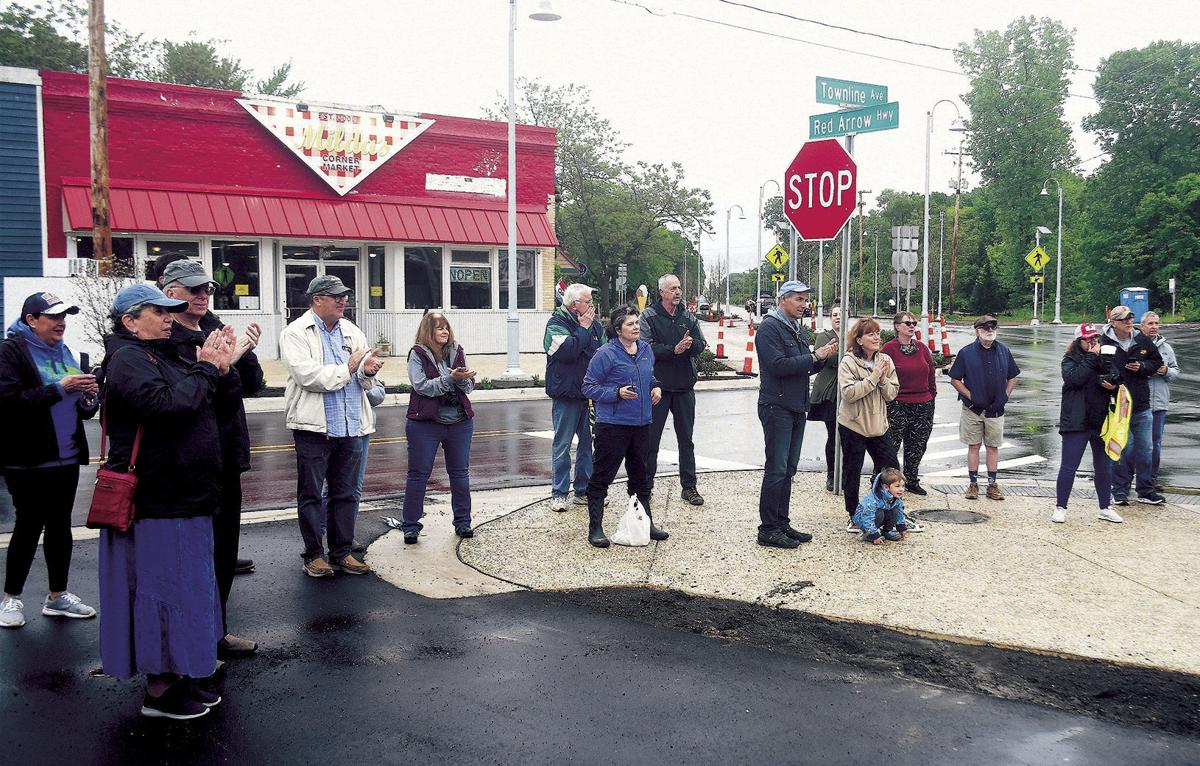 The audience for the May 28 ceremony marking the official opening of the new-look downtown Union Pier.

Pat and Lori Harrington walk their dogs, “Tucker” and “Bailey,” on the new pedestrian-friendly Union Pier streetscape along Red Arrow Highway on the morning of Monday, May 31.

David Bunte, Kevin Stack and Michelle Heit (from left) during the May 28 ribbon-cutting ceremony for the Union Pier Red Arrow Highway Corridor Improvement and Streetscape Project.

Adding plants to the Union Pier streetscape project on May 28.

The audience for the May 28 ceremony marking the official opening of the new-look downtown Union Pier.

UNION PIER — A whole new Union Pier was celebrated during a Friday, May 28, ribbon-cutting ceremony at the intersection of Red Arrow Highway and Town Line Road.

“The road department was the driver here … we want to thank them so much for this project that’s been two and a half years in development,” he said before cutting a ceremonial ribbon with New Buffalo Township Supervisor Michelle Heit.

Bunte said he hopes everybody enjoys the new Union Pier.

“It’s an amazing transformation from where we were a year and half ago.”

He personally thanked all of the businesses located in Union Pier.

“I know it’s been a challenge for the past year and four months. We did our best to try to keep everybody informed. We really wanted you to be successful, we’re hoping this makes you even more successful and the economy even drives more opportunities here in Union Pier.”

Bunte also thanked local residents for “putting up with the traffic changes and everything else. Once you get used to it I hope you’ll find it was all worthwhile.”

He said a “more celebratory” event, “more of a street party,” is being planned for the end of the summer “to really kick off everything being completed.”

Heit said Kevin Stack, an engineering supervisor with the Berrien County Road Department, “worked tirelessly with us.” She also gave credit to county commissioners, and the “wonderful” collaboration with Chikaming Township.

“Since November of 2019 The Pokagon Fund has awarded grants totaling over $1 million to New Buffalo and Chikaming Townships for the Red Arrow Highway Union Pier Redevelopment Project. These Pokagon Fund investments covered many of the expenses that set this road reconstruction part of the project apart from others by providing walkability features (that) will allow pedestrians and cyclists to safely access the heart of Union Pier,” Zabicki said.

She said amenities like public restrooms, picnic tables and benches will “enhance the welcoming atmosphere of Harbor Country.”

“Adding highly desirable aesthetic features like lighting, ornamental plantings street trees that will catch the eye and make Union Pier a place for residents and visitors to enjoy and remember.”

Zabicki said The Pokagon Fund wishes to thank the leaders of Chikaming and New Buffalo Township, the Berrien County Road Department, and the businesses and residents of Union Pier “for their significant contributions to this redevelopment project,” adding that their efforts will make a positive impact on the community for decades to come.

Steve Carlisle, project principal from Wightman and Associates, said he is really proud to be a part of the project.

“There was over three and a half million dollars invested in just the streetscape and road project alone, and there was other sewer work prior to that totaling a lot more money,” he said.

Carlisle said the pedestrian improvements have made the main intersection in Union Pier “a lot safer place for people to be.”

He said Kalin Construction has worked on the road, streetscape and sewer project and “did a great job – they’re always a great partner.”

“It’s been a great experience for us, we’re really proud of what we’ve accomplished here.”

County Commissioner Ezra Scott said the first thing he brought up to the county board when he took office five years ago involved having a stoplight put back in at the main Red Arrow Highway intersection in Union Pier.

Although state regulations did not allow that, he said the current project grew out of that effort.

“The most important thing that I see about this our these crosswalks, it’s the safety issue for me because we have a lot of people that live on the other side of the tracks and that walk across to come to the businesses,” Scott said.

Stack said the Road Department began investigating the project after receiving complaints about pedestrian facilities and traffic movement in the area.

“Three years ago we started with a high-level scoping, deciding what this was going to look like … meeting with several business owners and the public, just getting their input.” Stack said.

About a year and a half ago he said they started design work, and now they have the finished product.

“Moving forward we hope it does improve the pedestrian safety,” Stack said, noting that there are operational flashing yellow solar-powered strobe lights at each end of crosswalks across the highway that can be activated by pedestrians.

The new streetlights that line both sides of Red Arrow Highway in Union Pier are expected to be powered up in the near future.

Stack said the project has had its us and downs, with the downs mainly involving the sewer project that kicked things off.

“When you’re working 30 feet in the ground you never know what you’re going to come up with, and we found a lot of stuff,” he said. “Just alone in this corridor over the past year we’ve put about eight and a half million dollars in … $4.9 million of that was the sewer project from here all the way up to Cherry Beach. And then the rest of it was abut three and a half million in the roadside.”

Stack said seven different entities and three consultants were involved getting the project from start to finish.

“It’s never easy taking a highway from four lanes to three. So we’re definitely thinking it’s going to be a great improvement. People who may not like it will develop a like for it once they see the safety improvements it has.”

Stack said Red Arrow Corridor work will continue, with a road and streetscape project slated for this summer on Harbert.

“After July 4th we start up in Harbert – a different design but the same concept (three-lanes on Red Arrow Highway and a non-motorized linear park path),” Stack said, adding that Chikaming Township plans to do the streetscape portion of the Harbert project next year.

Stack said the trailhead facility in Union Pier (complete with a parking lot and restroom facility) was originally going to be part of the streetscape project, but since New Buffalo Township didn’t own the property when the project began it couldn’t be included in federal funding.

Zabicki said gravel for the trailhead lot will be brought in soon, with paving likely to take place in 2022.

“The trailhead, the bathrooms, there will be picnic tables out there, it will be a very nice addition to the path,” she said.

The trailhead connects with the linear parkway trail, a section of which is part of the Union Pier corridor project. Stack said the parkway is eventually supposed to connect to the Marquette Greenway in New Buffalo (from where it will stretch all the way to Chicago) along with being part of a county-wide linear park (that currently also includes the Indiana-Michigan Trail in the Niles area).

“We’re hoping that it (the non-motorized trail in Union Pier) will go all the way into New Buffalo and then all the way up to Bridgman,” Zabicki said.