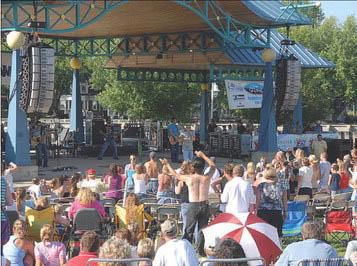 A Venetian Festival concert in 2008. 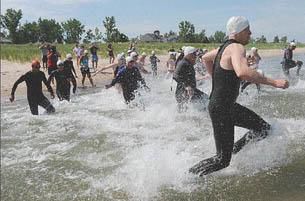 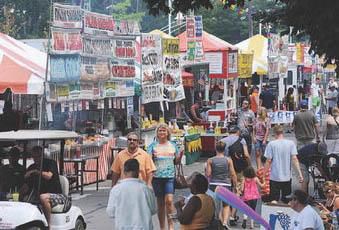 Respondents to a St. Joseph city survey this summer criticized the lack of local food vendors at the Venetian FestivalÕs Taste of Southwest Michigan.

A Venetian Festival concert in 2008.

Respondents to a St. Joseph city survey this summer criticized the lack of local food vendors at the Venetian FestivalÕs Taste of Southwest Michigan.

ST. JOSEPH — They actually thought they could come up with a solution.

The Venetian Festival Board of Directors and Senior Membership – some 30 people in all – went into their Monday, Sept. 26, meeting at the Holiday Inn Express thinking they could work with St. Joseph’s new conditions and come up with a smaller festival acceptable to city officials.

“Sadly, though everyone went into that room thinking we could come up with something to take back to the city, it didn’t work,” said festival President Laurie Draper. “Everyone was really stunned. I couldn’t believe it.”

Draper said the board and Senior Membership had three propositions to vote on. One was to come up with a plan acceptable to the city, the second was to try to relocate to another municipality, and the third – which they voted to adopt – was to dissolve.

“After more than two hours of trying to put something together that might possibly work, the majority decided it was too big a financial risk to make that change,” Draper said. “We couldn’t come up with something that didn’t have significant public safety concerns, for example.”

The St. Joseph City Commission recently voted to end the city’s $25,000 contribution to the festival, most of which was in-kind services such as police patrols. That followed receipt of a city-wide survey that showed about two-thirds of residents and business owners don’t support the festival.

City officials said they encouraged Venetian officials to come up with a new festival.

“They were very cordial,” Draper said. “I want to make that clear – they were very cordial and very polite. But it was our sense that they really didn’t care if we stayed, and they wouldn’t miss us if we went. There wasn’t any genuine desire on their part to make it happen. They certainly welcomed us to come back with a plan, but they weren’t very encouraging.”

The decision ends a 33 year run for the festival. It started small, then grew into a four-day event, featuring big-name bands and immense crowds.

About 63,000 people attended the festival in 1997, according to a 1998 Michigan State University study. About 58 percent of them came from outside the area, and the festival brought in about $1.7 million to the local economy that year, the study showed.

The people who attended that year had a great time; 90 percent of those surveyed said they’d be back the following year.

The festival may have been a victim of its own success. As the crowds got bigger, so did the problems.

Parking below the bluff became such a problem the city had to block the area off, allowing only residents to enter. People looking for places to park above the bluff jammed alleys and side streets, making it impossible for fire trucks to get to some areas. There were a few fights at the carnival, and merchants began reporting shoplifting and other problems.

Those problems eased somewhat when the festival lost some major sponsors and had to get smaller on its own. But it evidently came too late to regain local support.

In the city survey, residents said the festival was “too big,” “a zoo,” “too loud – too crowded,” a “big party for drunks,” and “music unappealing.” They didn’t like the lack of local food vendors, thought the carnival should be discontinued, and felt the festival denied use of the beach and the library to city residents.

But the festival still has its supporters. The Venetian Festival’s Facebook page included an announcement the festival was ending, and there were a number of messages of support and disappointment.

“This is sad news,” one man wrote. “Not only do the rich and investors own a big part of Silver Beach, but we, the public, have to suffer with the loss of one of the greatest festivals Southwest Michigan has to offer! I’m gonna miss coming to it. Purely political if u ask me.”

One person said those surveyed wanted the festival “to go back to the format it was 20 years ago,” and wondered why festival officials weren’t complying.

The Venetian Festival in its formal announcement said “festival organizers studied a variety of concepts for redesigning the festival to work within the city’s parameters including, as many have often suggested, ‘returning to its roots’ of a smaller festival confined to the arboretum. But the passing of time that, among other things, included 30 years of tree growth in the arboretum, lack of current available infrastructure, and skyrocketing costs of entertainment, made that option not realistically viable either logistically or financially.

“Consequently, after much hopeful discussion of finding a means of continuing on, event organizers came to the conclusion that the Venetian Festival no longer had a home in the city of St. Joseph, and elected to retire the event.”

St. Joseph City Manager Frank Walsh said he was surprised by the vote.

“We had a meeting with a number of Venetian Festival board members just a week ago,” Walsh said. “And we talked about how we could possibly have a 2012 festival, but a scaled back version, based on comments in the survey. It was a very positive meeting. It was a very cordial meeting. They were to come back to us in 30 days with plans for 2012. And then I got up this morning, and found, it’s done.”

Walsh said the city “wanted to make sure there was an opportunity to have a festival. However, it had to be within the boundaries of the 1,553 comments we received from our residents. Our residents took the time to share their concerns, and it was the responsibility of the City Commission to adhere to the comments.”

Festival officials had access to the comments “from day one,” Walsh said.

The comments showed most residents no longer wanted the festival, Walsh said.

“I would say that there’s a large number of taxpayers who do not want to see a Venetian Festival,” Walsh said. “There’s also a fair amount of people who wouldn’t have minded a scaled-back Venetian Festival. But nearly 70 percent of our residents have mild to strong objections to the continuation of the festival.”

Walsh said the city wishes the festival organizers well, adding, “Their volunteers put in thousands of hours to put this festival on, and for that, we’re thankful.”

Despite the vote to not attempt to relocate the festival to another city, Walsh said there’s a chance that could still happen.

Draper is in her second year as president and has been with the festival for 14 years – a “newbie,” by festi val standards, she said. She got involved when her brother, Gary Cecchi, asked her to take some festival photos he needed.

“I came down and stayed forever, which is kind of how everyone gets involved,” Draper said.

She said it’s wrenching to see the festival end.

“I’m really saddened by it,” Draper said. “I’m shocked and I’m devastated because this isn’t what any of us wanted. We genuinely hoped we could find a way to adapt and make it work and continue on. It was a really difficult decision for us to make.”

Festival officials will now have to liquidate a few assets, close down offices in the 505 Building and dissolve the corporation, Draper said.

The festival is run by a 15-member board of directors, but the Senior Membership – event directors and project managers – was brought in for Monday’s vote, “given the enormity of the decision,” she said.