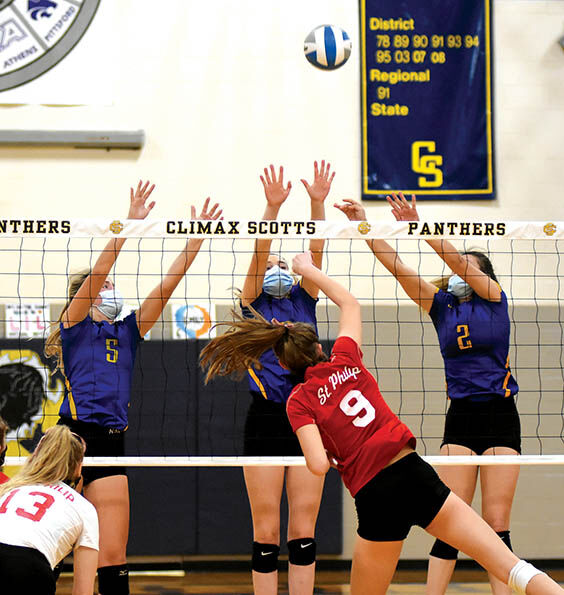 Members of the New Buffalo High School volleyball team are introduced ahead of a Nov. 10 Division 4 reginal semifinal match. 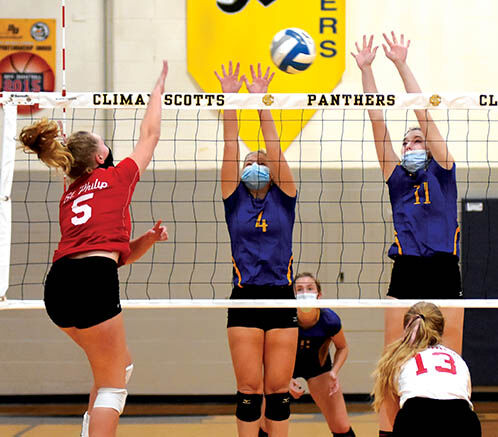 Alexis Snyder of Battle Creek St. Phillip (from left) spikes the volleyball while New Buffalo players Emma Lantz and Allie Smith rise up for a block. 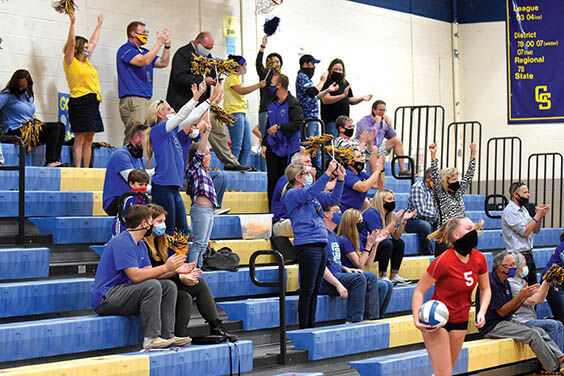 Members of the New Buffalo High School volleyball team are introduced ahead of a Nov. 10 Division 4 reginal semifinal match.

Alexis Snyder of Battle Creek St. Phillip (from left) spikes the volleyball while New Buffalo players Emma Lantz and Allie Smith rise up for a block.

St. Phillip took control early in the opening set, jumping out to a 10-2 lead as Harleon Deol had an attack kill and an ace serve, Brooke Dzwik smacked down two straight spikes and Rachel Myers aced three serves.

Sophia DeOliveria and Ava Mullen led a furious New Buffalo rally with a series of point-scoring kills and tips to cut the margin to 18-16, but Dzwik answered with two ace serves and a pair of kills, including the game-winning spike from the back row.

The second contest was close until the Bison broke free from a 9-9 tie as a kill and a block by Ashley Hauseman and a Mullen kill helped open up a 20-13 advantage. Kelsey Corkran’s ace serve and another Mullen attack kill propelled New Buffalo on to the 25-15 win.

The third set was all Tigers early as aces from Myers and a a flurry of tips and kills by Dzwik fueled an 8-1 surge.

Slowly but surely New Buffalo battled back, with kills by DeOliveira, Mullen and Emma Lantz, a Hauseman block and three straight ace serves from Mullen leaving the score 20-15.

But St. Phillip’s Harleen Delhi came through with a block and then a kill to help push her team on to the 25-17 victory.

Needing to win the fourth set to stay alive, the Bison rallied from an early 8-4 deficit to pull even at 12-all as Mullen and DeOliveira spiked down kills while Hauseman and Corkran served up aces.

Kills by Dzwik and Myers along with Baily Fancher’s ace serve pushed the Tigers back on top 17-12, but New Buffalo got kills from Mullen and DeOliveira to pull back even at 18-18.

The Bison edged ahead 22-12 as DeOliveira spiked the volleyball to the back of the court and aced a serve.

With the score knotted at 22-22, Dzwik accounted for three of the match’s last four points (including the one that left the final tally 25-23) with emphatic spikes to the gym floor.

Dzwik finished with 31 kills, 3 aces and 20 digs to pace the Tigers. Meyers added 43 assists and 14 digs to go with 6 ace serves.Battle Creek St. Phillip went on to sweep past Athens by 25-20, 27-25, 25-21 tallies on Nov. 12 to claim the regional title and advance to the quarterfinal round against Lansing Christian at Portage Northern High School on Nov. 17.

Athens defeated Martin 26-24, 25-23, 25-10 in the other Nov. 10 regional semifinal. Athens had topped top-ranked and defending state champion Mendon in districts.

The Bison went into the postseason ranked second in the MaxPreps ratings and seventh in the MHSAA Division 4 poll. Battle Creek St. Phillip was an Honorable Mention squad in the MHSAA rankings.