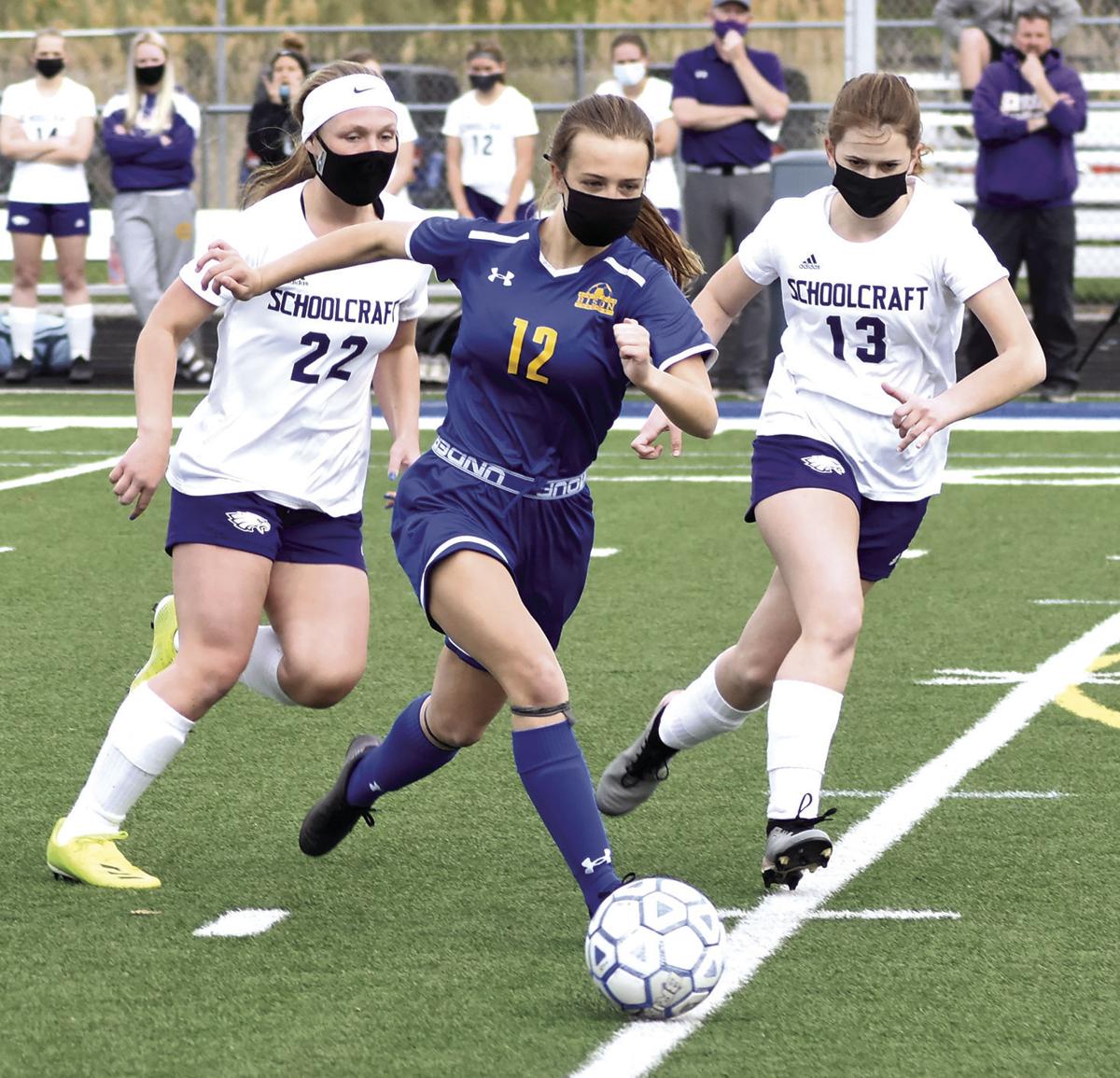 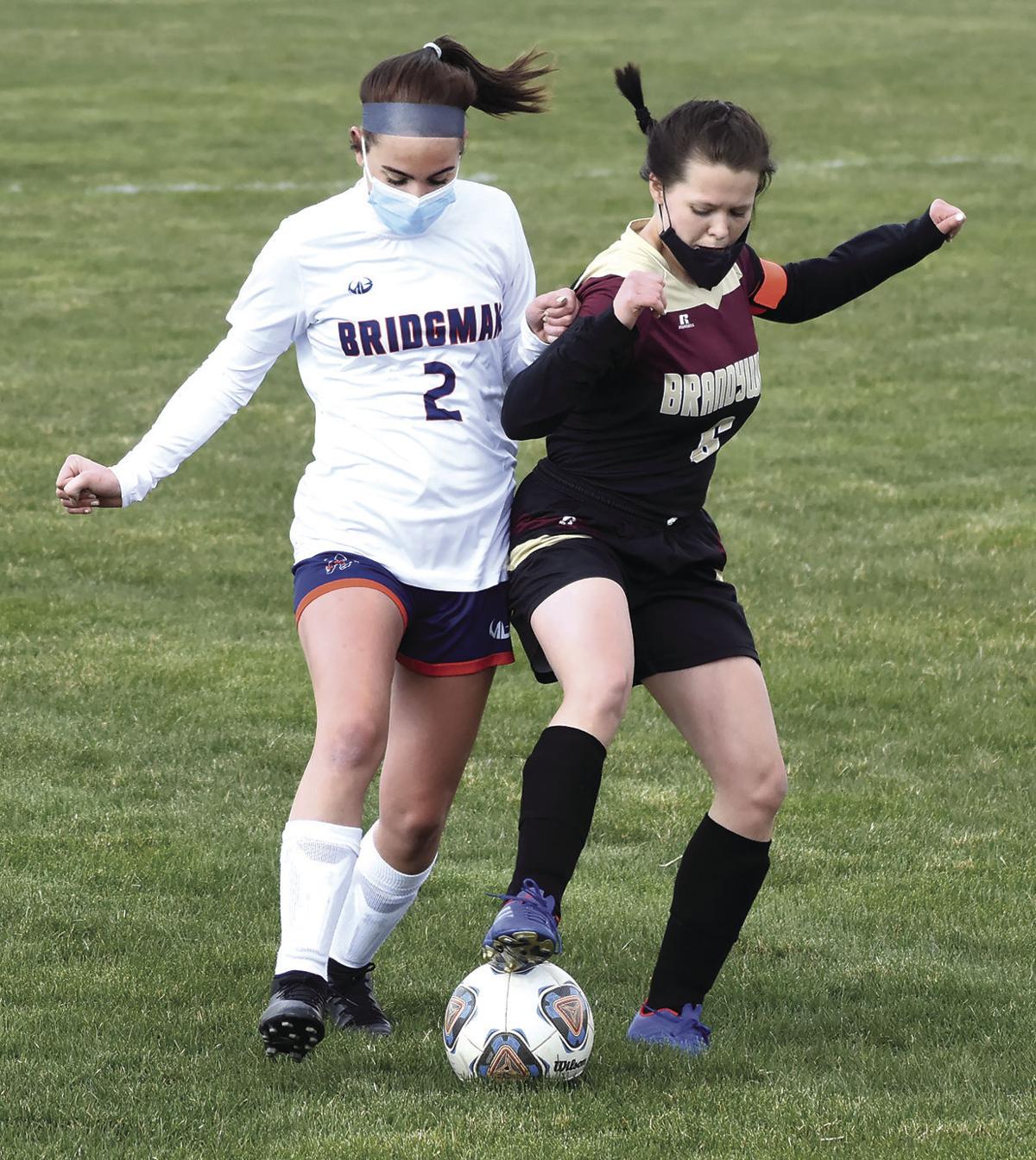 Bridgman’s Emmy Dinges (left) and Vivian Fahey of Brandywine vie for control of the ball. 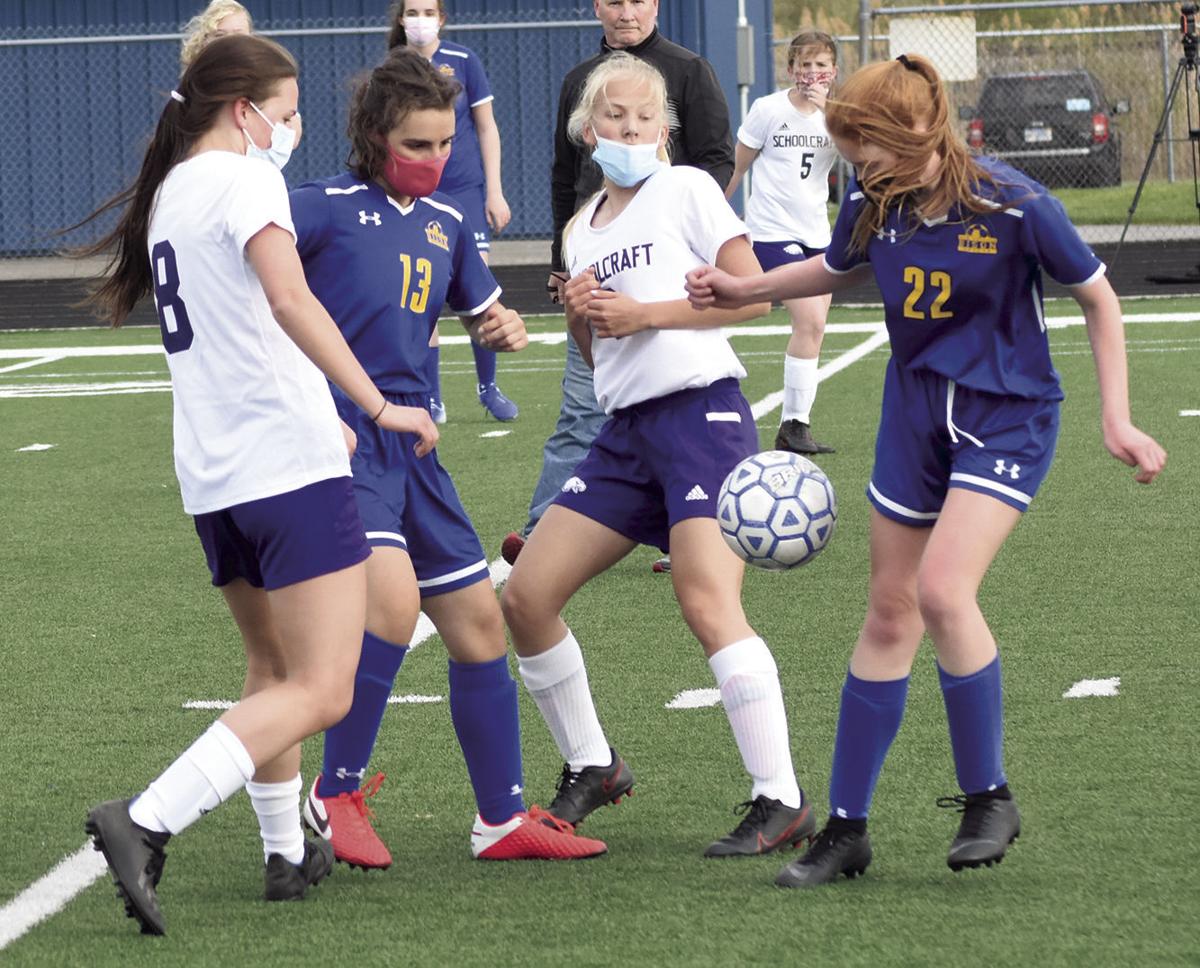 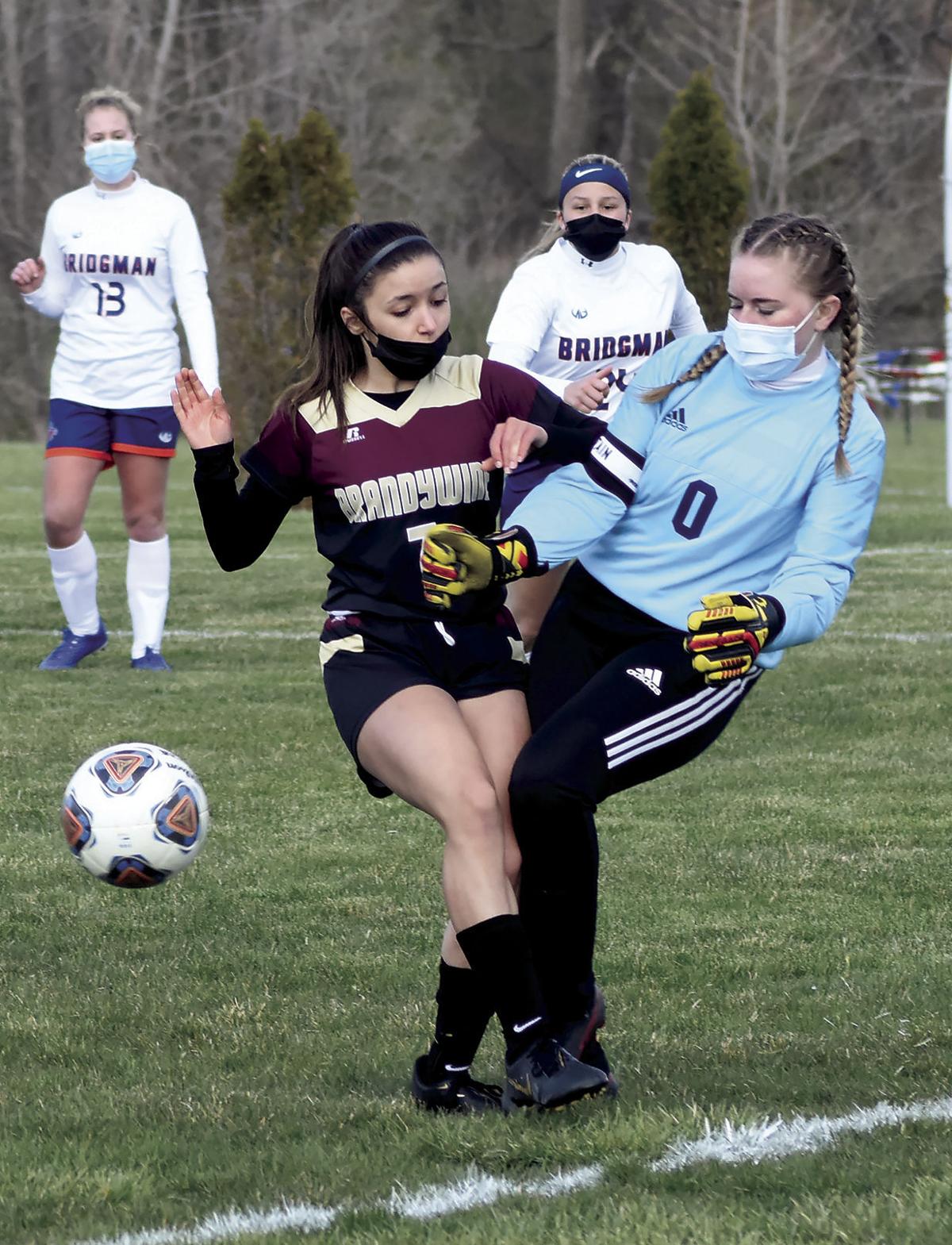 Allison Fedore of Brandywine (left) and Bridgman goalkeeper Morgan Granzow in action during the April 21 match on the Bobcats' home field. 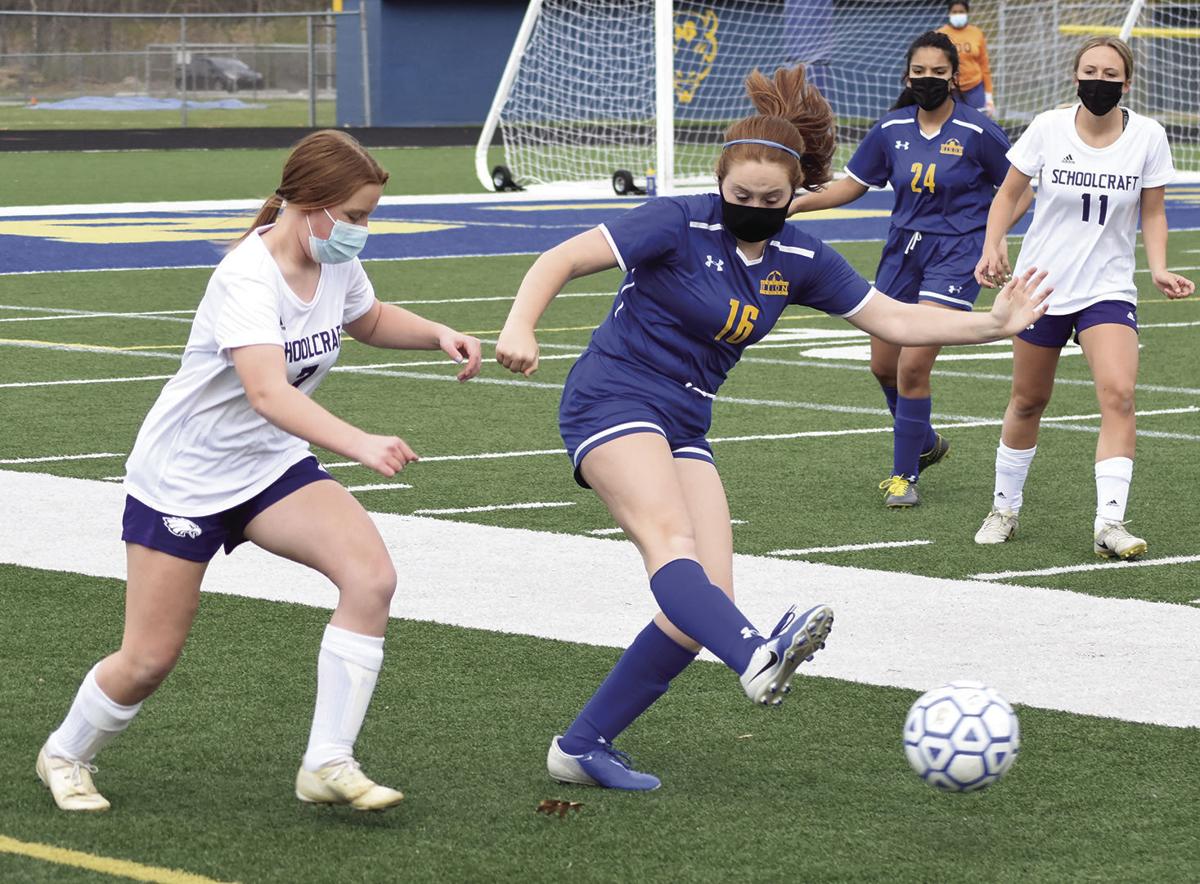 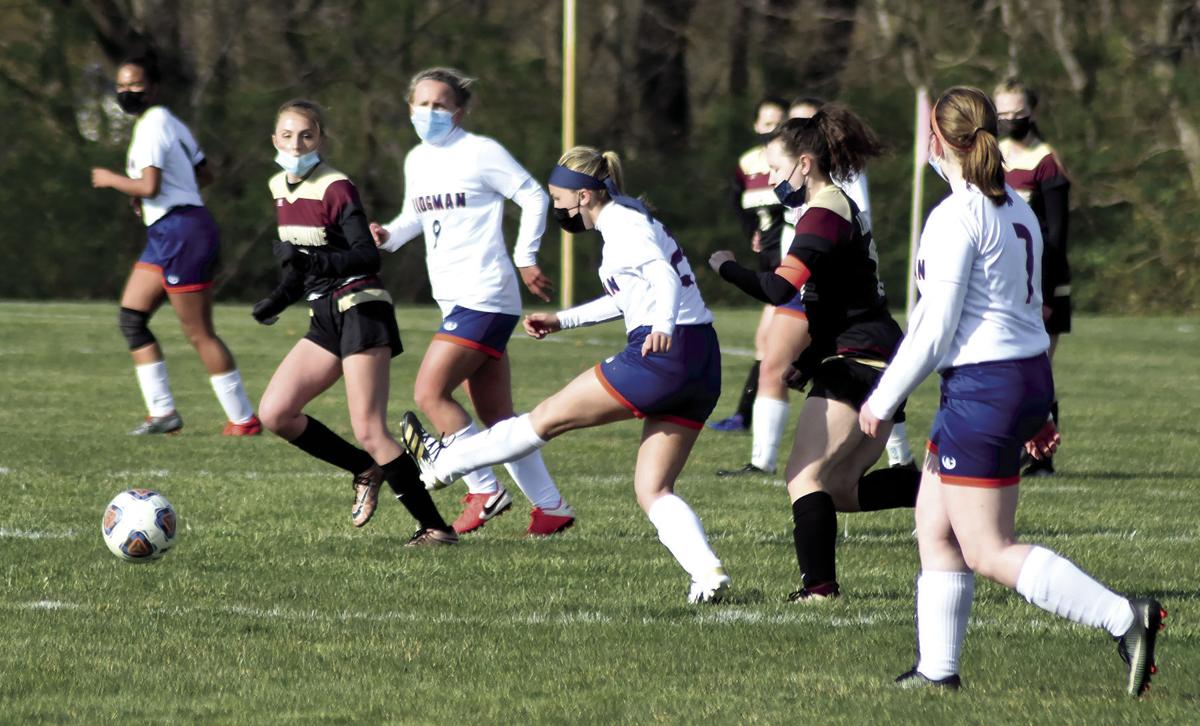 Bridgman’s Emmy Dinges (left) and Vivian Fahey of Brandywine vie for control of the ball.

Allison Fedore of Brandywine (left) and Bridgman goalkeeper Morgan Granzow in action during the April 21 match on the Bobcats' home field.

Goals by Lily Badger and Steph DeMeulenaere opened up a 2-0 first half lead.

Badger scored again early in the second half before before Brandywine’s Karla Avina-Rios got the Bobcats on the board to make it a 3-1 game.

Badger booted in her third score and Olivia Tomlin tallied two goals down the stretch to account for the final margin.

“So far I’m really proud of our team,” said Tomlin.

Badger, a senior, said each game has been a learning experience for the Bees, adding that she missed the sport a lot last spring.

Bridgman’s first setback of the season came in the form of a 3-1 loss at Coloma on April 23.

The Bees opened the season with a 7-0 win over Covert and an 8-0 victory against Watervliet.

“These girls have been together for a long time and they work well together,” said Bridgman coach Nick Foxworthy.

The Bison girls soccer squad opened the 2021 campaign with two wins and a tie.

On April 16 New Buffalo battled Bangor to a 6-6 deadlock as Georgia Arvanitis, Corkran and DeOliveira all tallied two goals.

The streak ended on April 21 with an 8-0 loss versus South Haven. New Buffalo then were blanked 5-0 by Schoolcraft on April 23.

The Bison got back on the winning track Monday, April 26, with a 5-2 triumph over Buchanan. Arvanitis scored three goals while Corkran and DeOliviera also found the net.