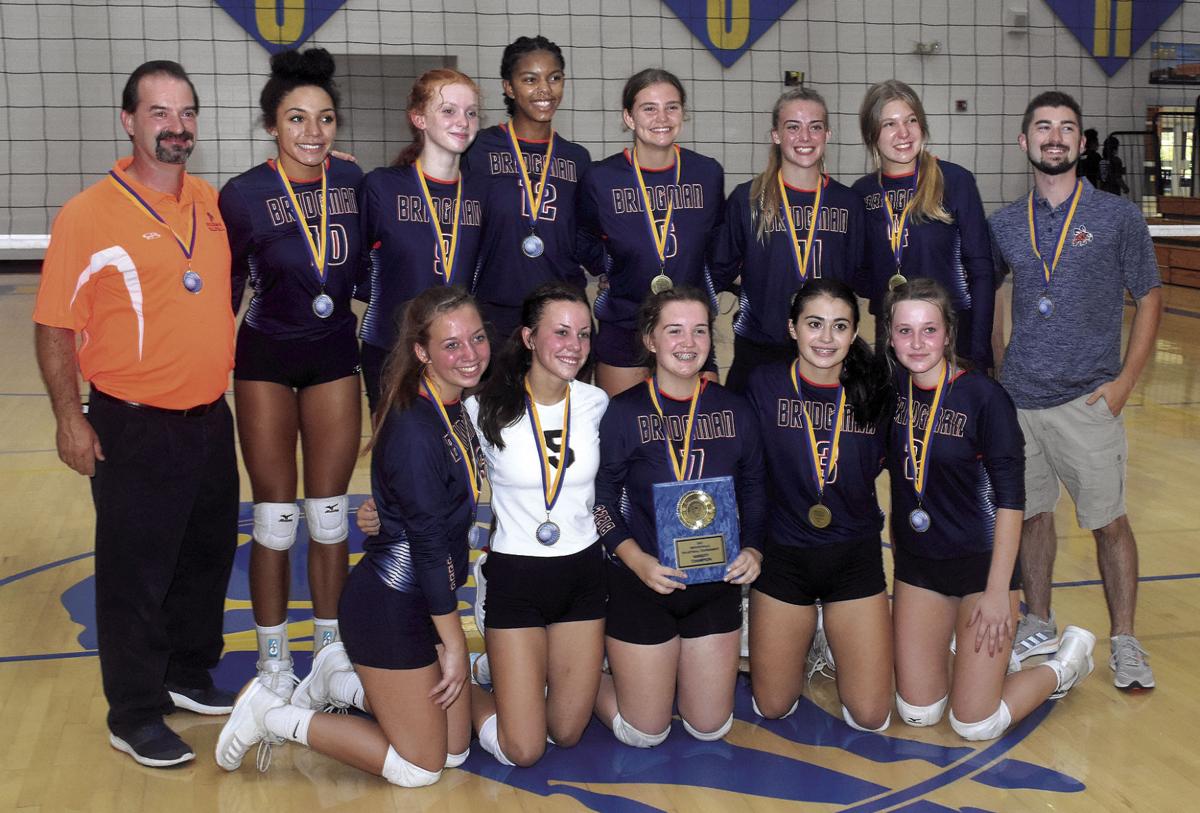 The Bridgman High School varsity volleyball team poses with the prizes they received for winning the Sept. 11 New Buffalo Invitational. 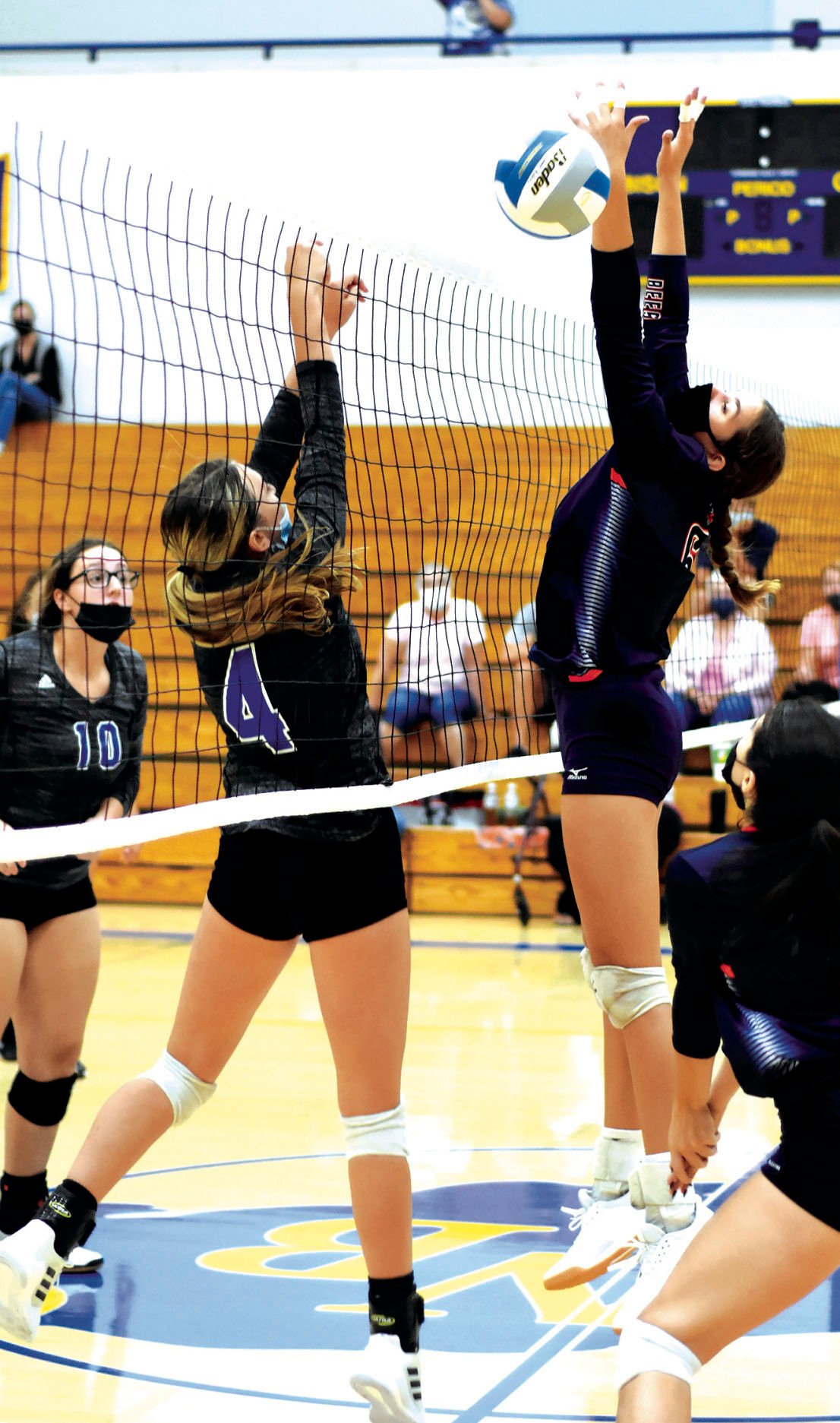 Bridgman’s Lily Barker (right) goes for a block against Ryli Bruks of Cassopolis in the finals of the Sept. 11 New Buffalo Invitational. 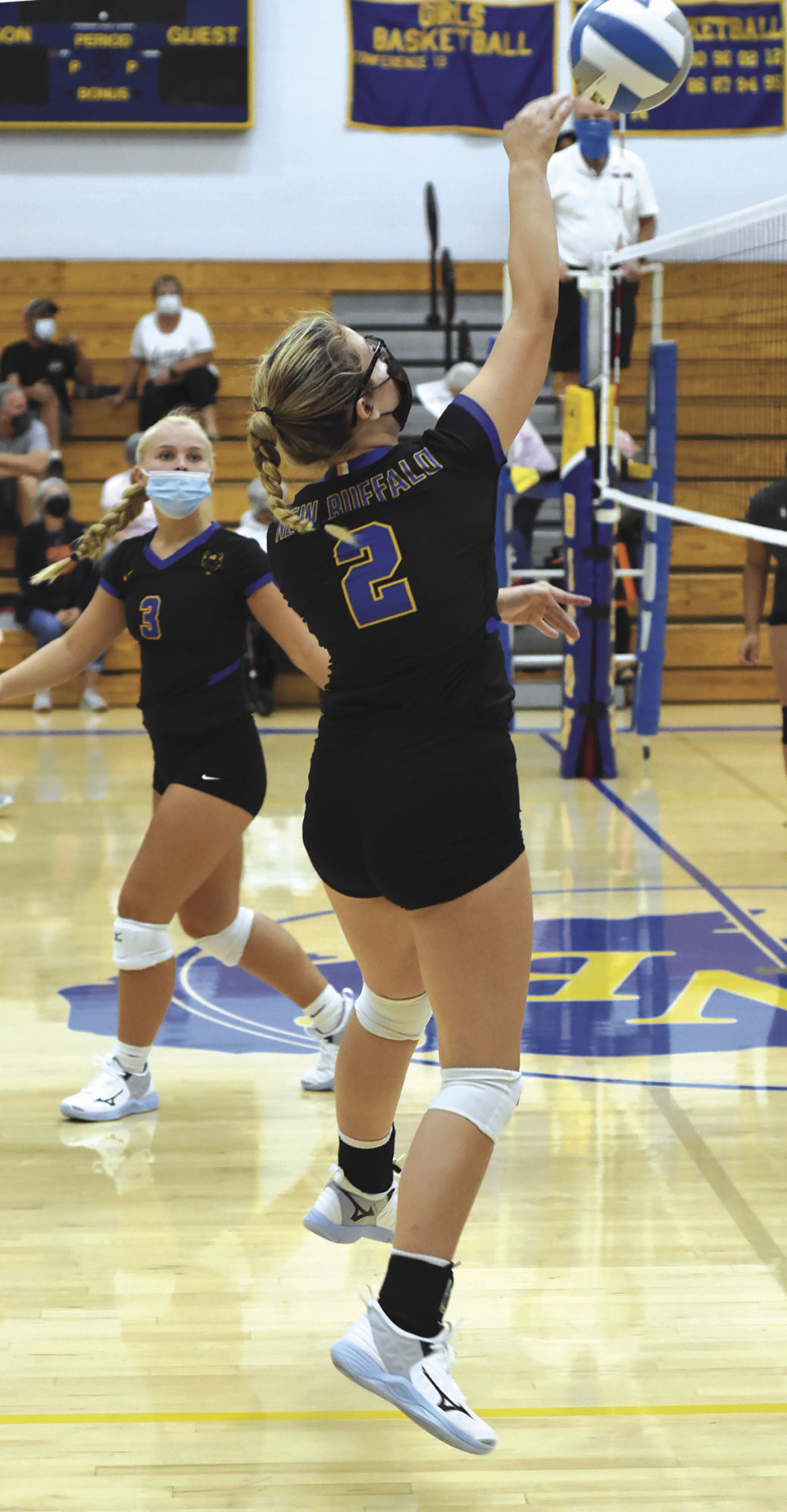 Amelia Selir spikes for the host Bison during the Sept. 11 New Buffalo Invitational. 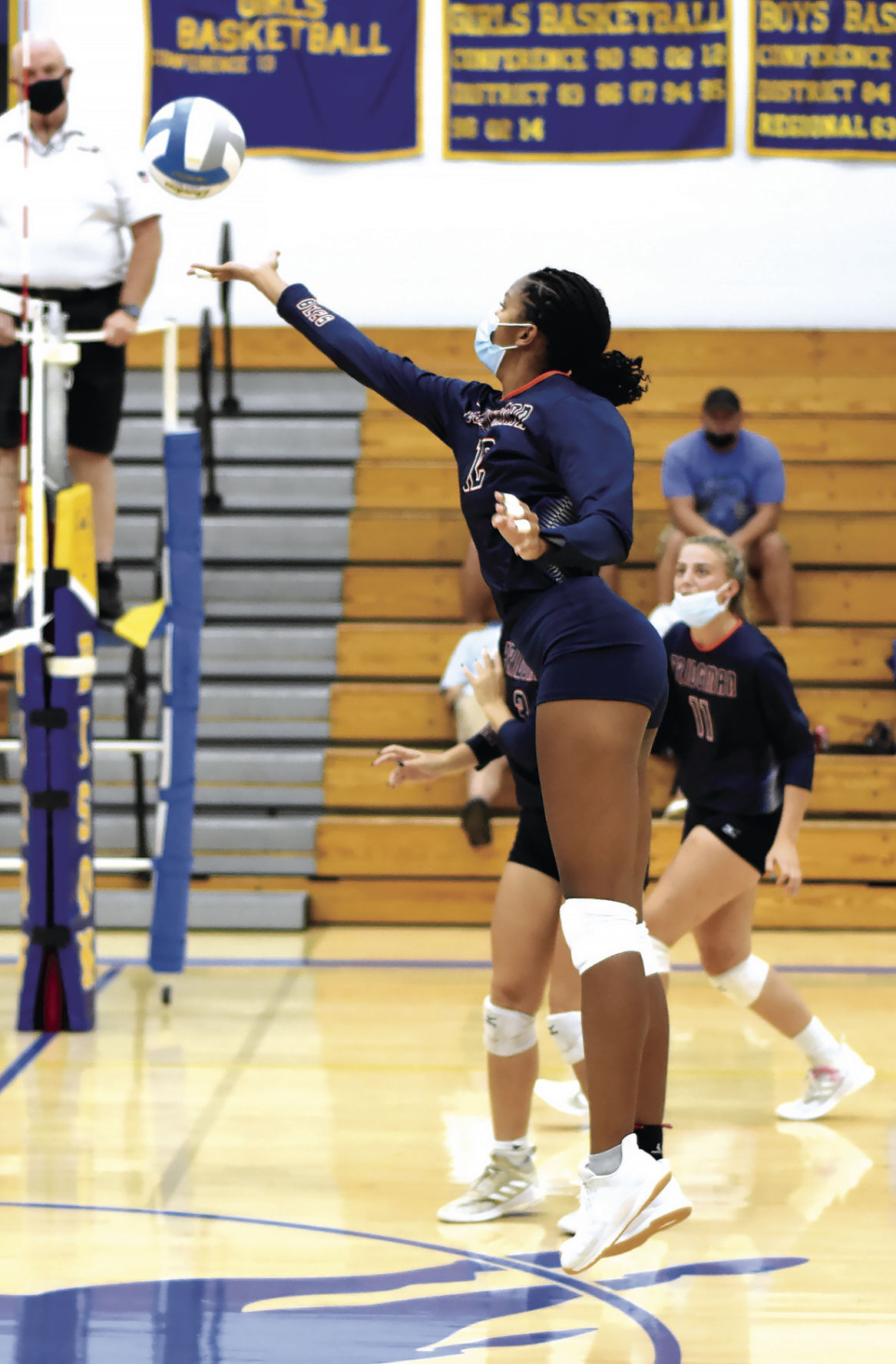 Tatyanna Hill lobs the volleyball over the net for Bridgman on Sept. 11 in New Buffalo. 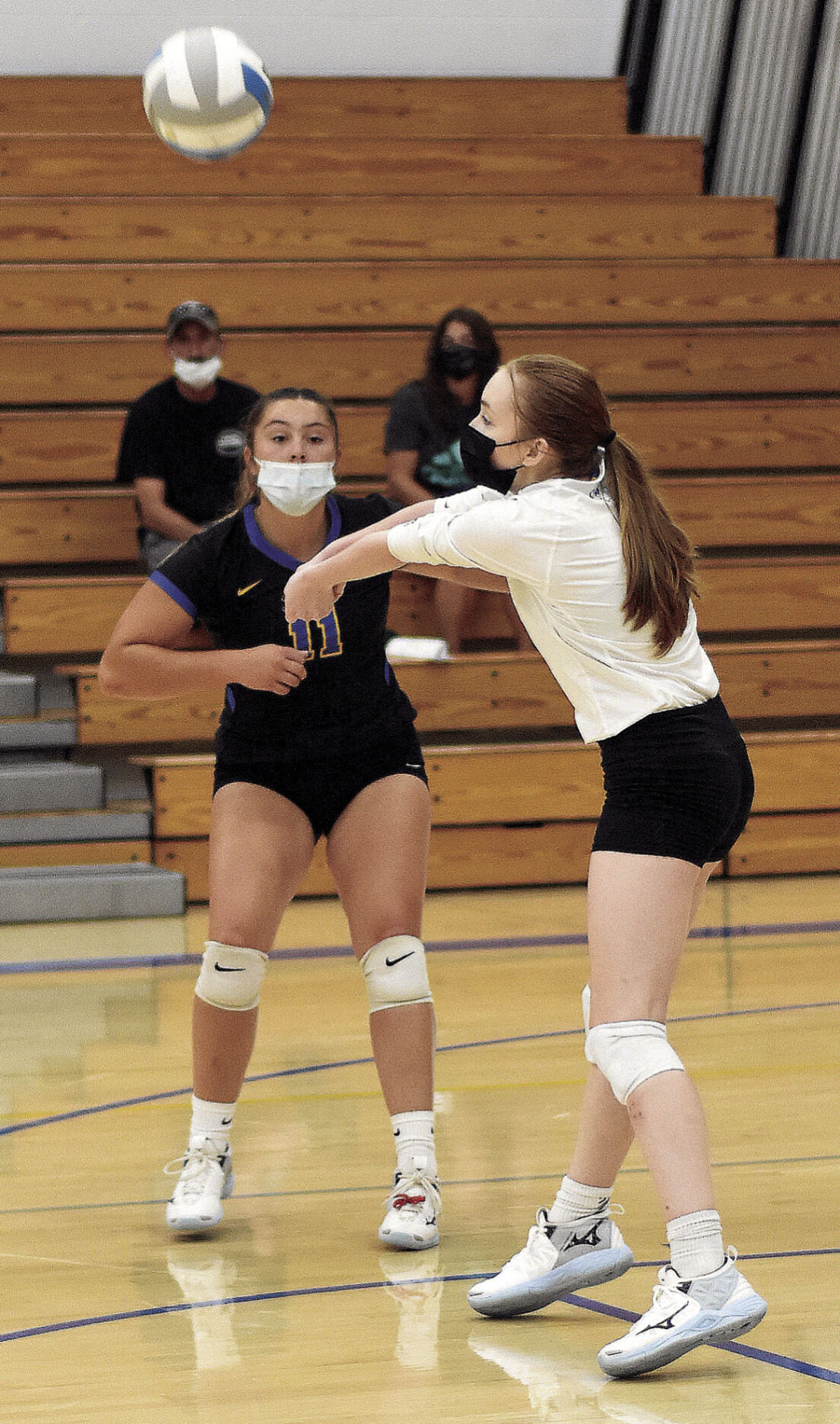 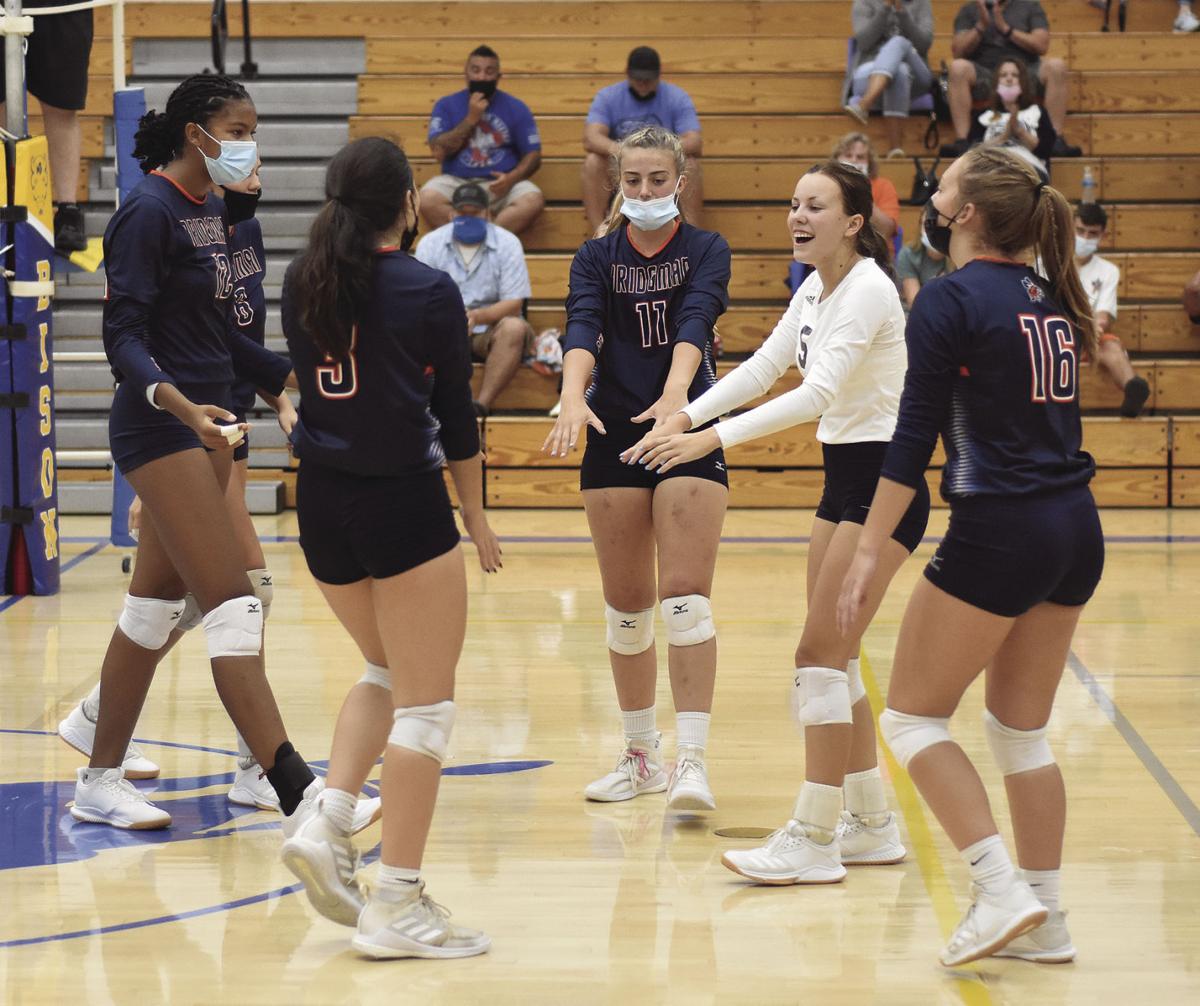 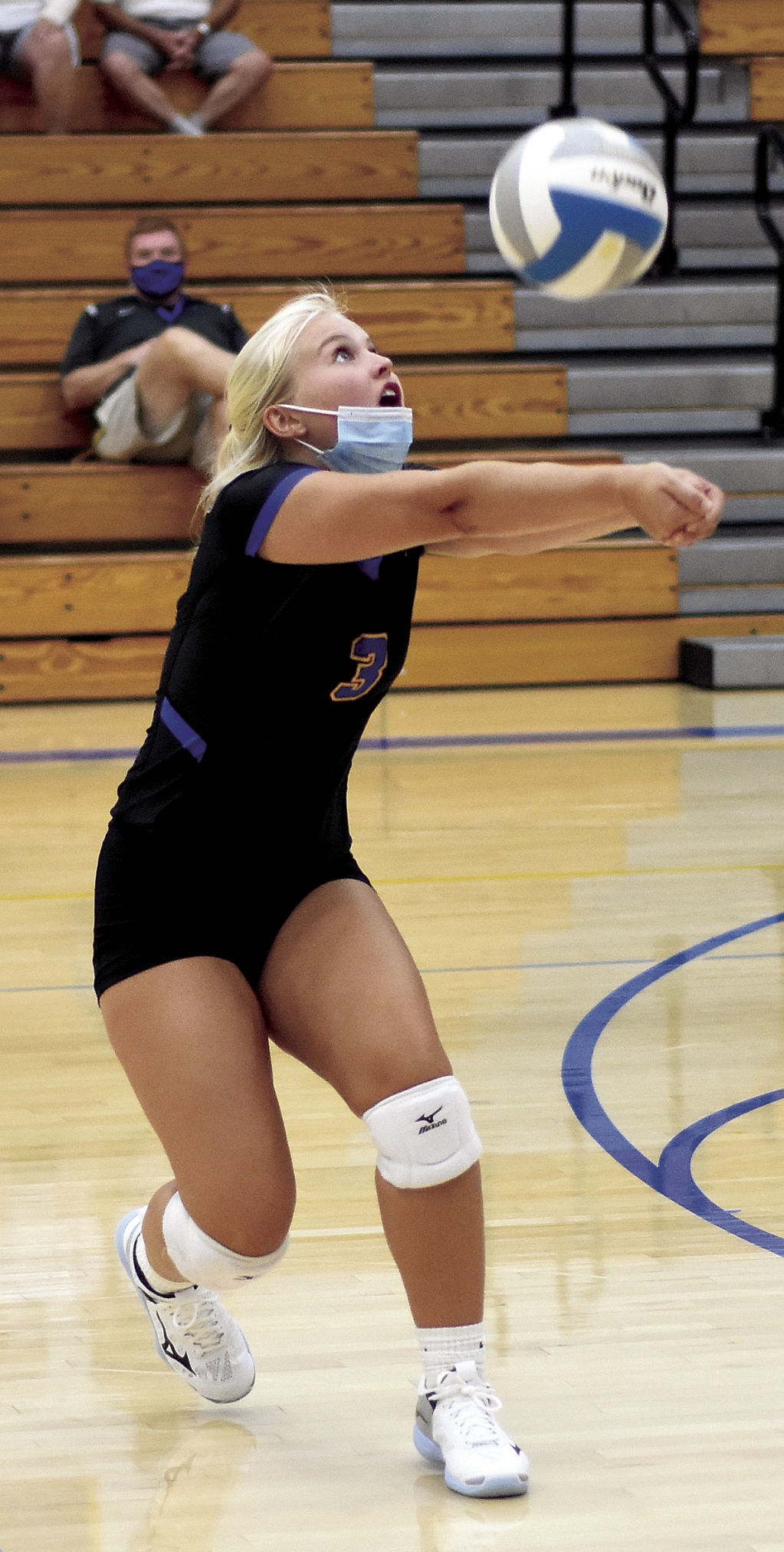 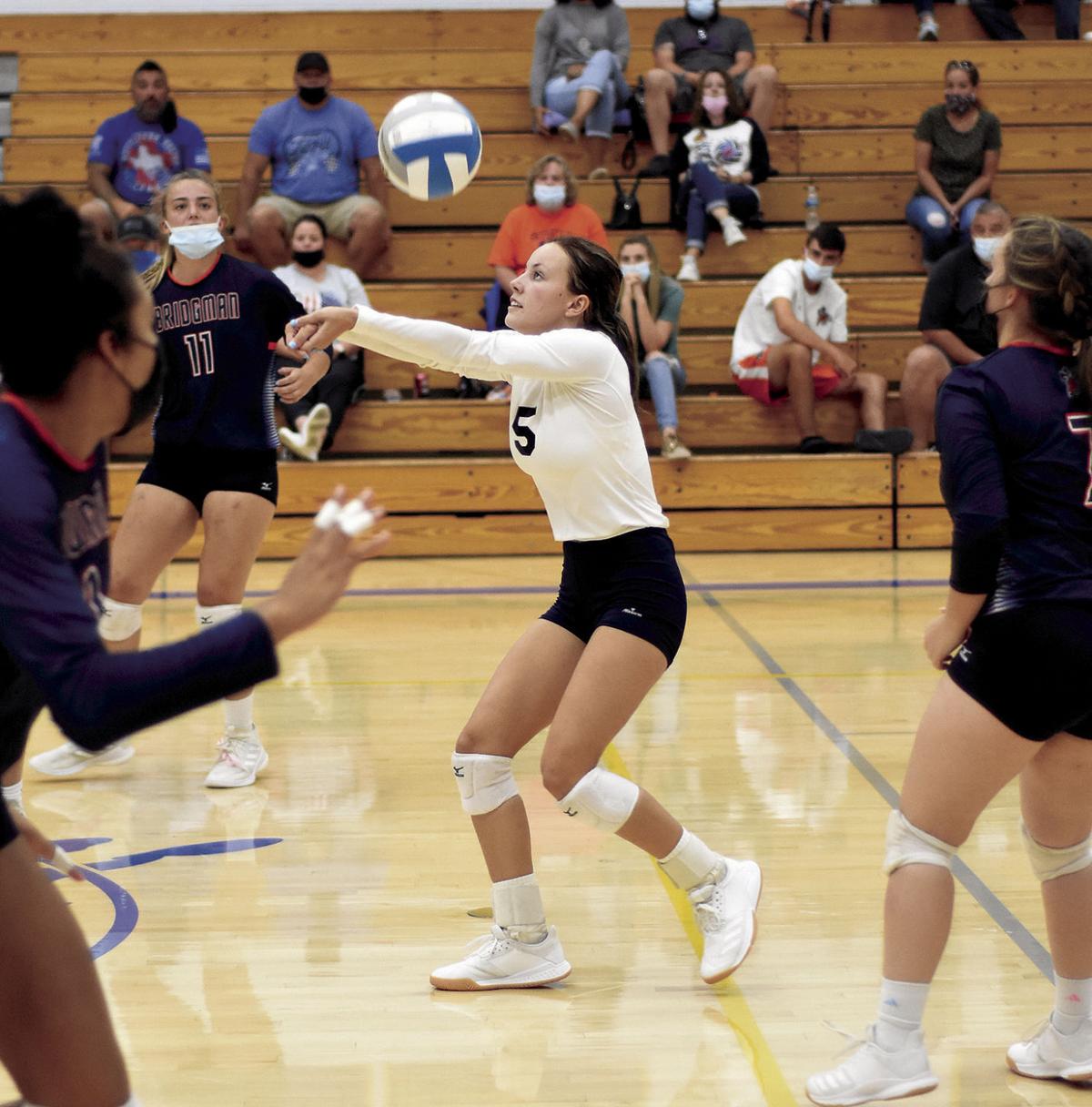 Peyton Oman passes the volleyball for Bridgman on Sept .11.

The Bridgman High School varsity volleyball team poses with the prizes they received for winning the Sept. 11 New Buffalo Invitational.

Bridgman’s Lily Barker (right) goes for a block against Ryli Bruks of Cassopolis in the finals of the Sept. 11 New Buffalo Invitational.

Amelia Selir spikes for the host Bison during the Sept. 11 New Buffalo Invitational.

Tatyanna Hill lobs the volleyball over the net for Bridgman on Sept. 11 in New Buffalo.

Peyton Oman passes the volleyball for Bridgman on Sept .11.

NEW BUFFALO — The Bridgman High School varsity volleyball team has started the 2021 season strong, but a tournament championship had eluded the Bees – until the Sept. 11 New Buffalo Invitational.

Bridgman went undefeated (10-0) on the day, with a semifinal round sweep of Brandywine and a 2-0 triumph in the finals against Cassopolis leaving no doubt as to who were the champions.

“I think our energy really pushed us through and we talked a lot, we knew where we were supposed to be and we worked together as a team really well,” junior libero Peyton Oman said.

Bridgman faced arch-rival Niles Brandywine in the semifinal round of the playoffs, and a Takiya Cornelius kill, Bri Russell’s ace serve and a block by Tatyanna Hill helped the Bees roar out to an 11-2 lead. A pair of aces served up by Ava Starbuck and a flurry of kills near the end of the contest from Cornelius, Hill and Haylee Kanous helped seal a 25-13 victory.

The Bobcats provided much more resistance in the second set, building an early 10-6 advantage as Clara DePriest and Kadence Brumitt had kills and Elizabeth Stockdale and Haley Scott aces serves.

Bridgman slowly caught up from there, with a tip by Kanous forging a 16-16 tie.

Brandywine forged a 20-17 lead as Kallie Solloway and DePriest spiked down kills, but the Bees caught back up at 21-all as Bella Gearhart came through with a point-scoring tip and Hill won a battle at the net.

A series of attack kills by Solloway and Brumitt helped Brandywine reach the verge of victory (24-22), but Bridgman got consecutive blocks (the second followed by a spike the the gym floor) from Hill to prevail 26-24.

“It was really hard sometimes, but I just kept going and kept having faith and believing I could do it,” Hill said.

The Bobcats had topped New Buffalo by 25-14, 25-13 scores in a Cassopolis got past Michigan Lutheran in three semifinal sets to reach the finals versus Bridgman.

The first match-up was close from start to finish, but the Rangers would never lead.

The Bees built a 12-7 margin early as Cornelius and Kanous had kills while Oman aced a serve.

Cassopolis fought back to draw even at 13-all as Zaniya Dodd had two blocks and a kill, but Bridgman was able to build a small lead and hold on to win 25-22 as Kanous had an ace and a point-scoring tip, Gearhart came up with a kill, Hill got two blocks, and Cornelius smacked down a pair of attack kills.

The Bees built a 7-2 advantage in the second set as Lily Barker spiked the volleyball down, Hill had a block and a kill, while Cornelius and Oman also got kills.

A kill, an ace and a tip from Kanous, Oman’s spike, and an Ava Starbuck kill and block helped open up a 20-14 lead, and Bridgman proceeded to slam the door shut as point-scoring tips by Kanous and Gearhart, a Barker block, Starbuck’s kill, a Kanous ace serve and Starbuck’s tourney-ending spike to the gym floor left the final tally 25-15.

“I knew it was the last play … and I wanted to go all out,” Starbuck said of the final point.

“I was really happy with the way we played.”

New Buffalo coach Bruce Molineaux said the Bison are a young team with Ashley Hauseman one of those returning from last year’s squad.

The Bison were coming off a victory over BCS rival Lake Michigan Catholic.

“We’ve just got to keep improving,” he said