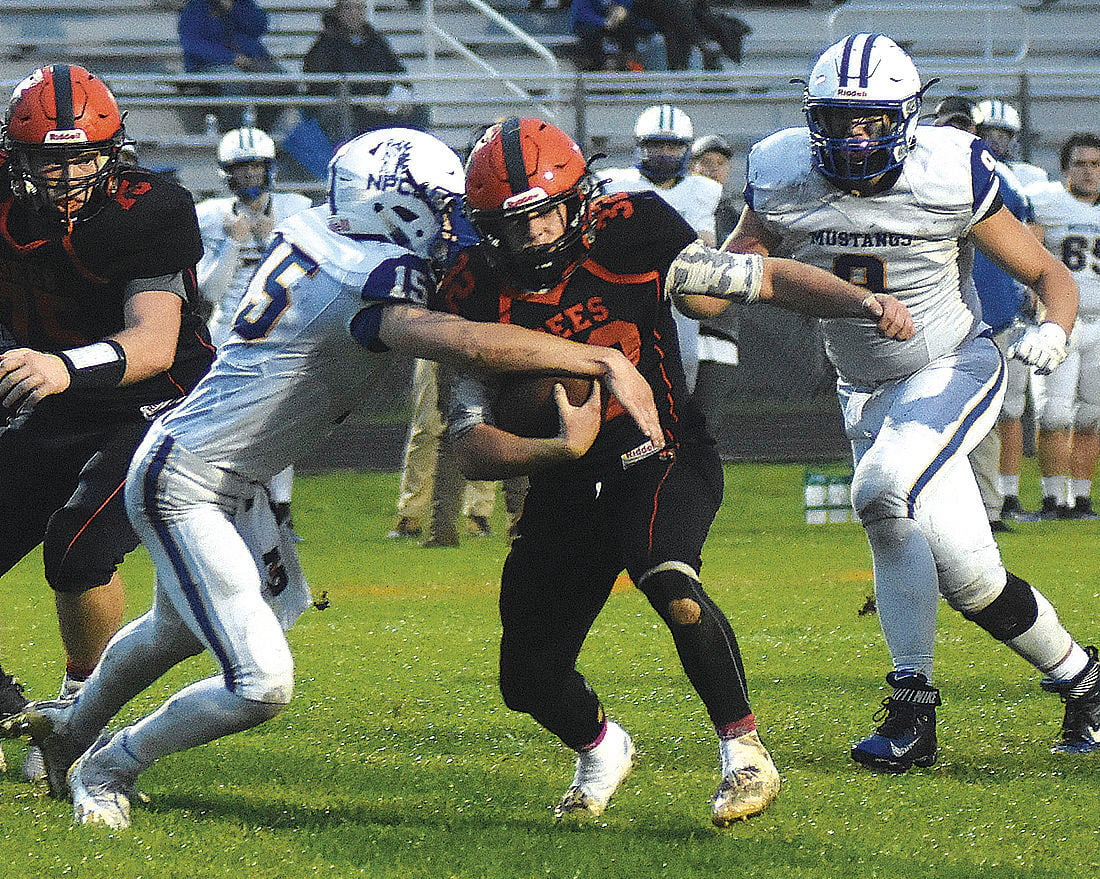 Nate Necas (center) runs through the heart of the Northpointe Christian defense on Nov. 28 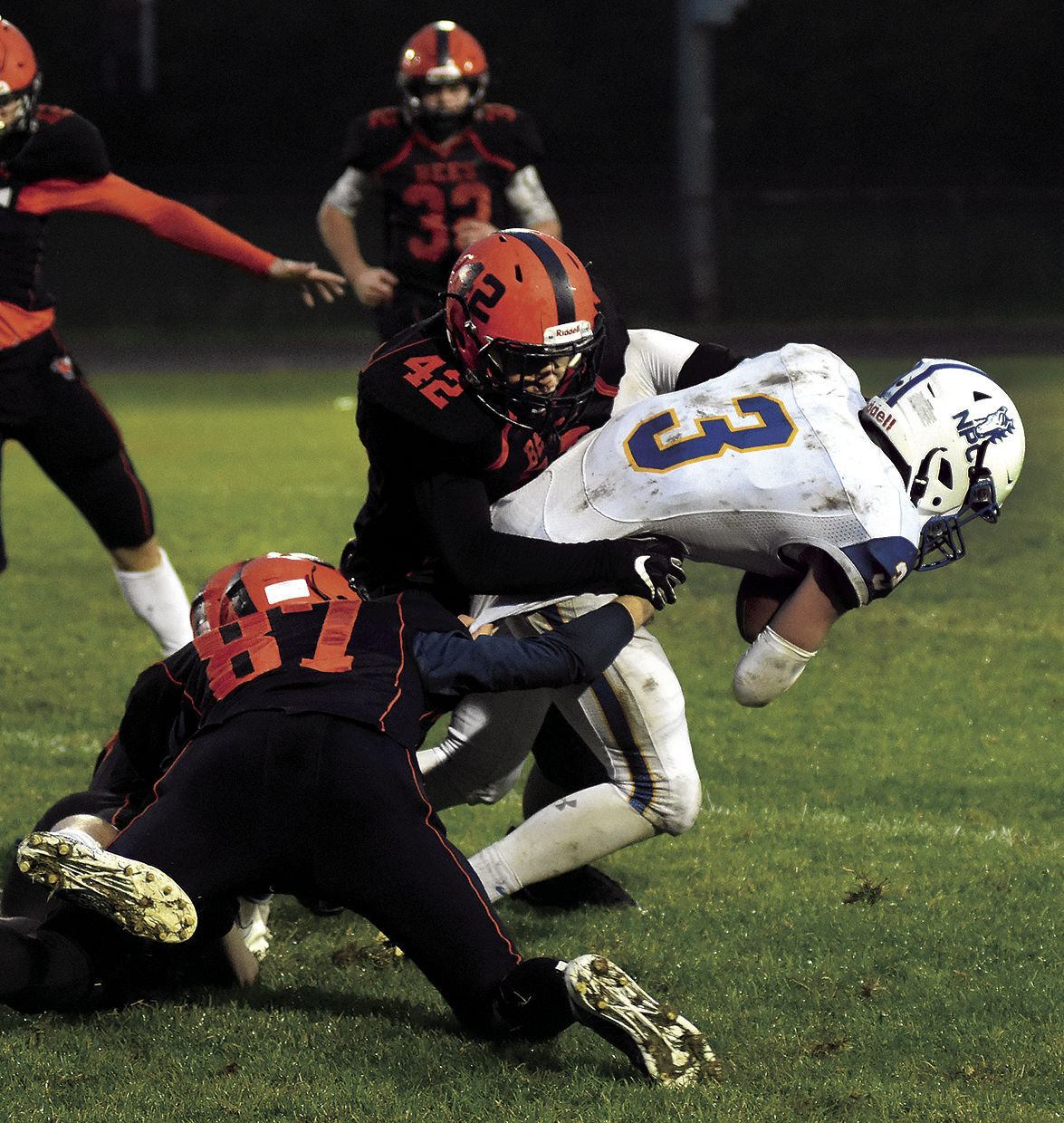 Eric Braam of NorthPointe Christian (right, No. 3) tries to escape from Bridgman defenders Nolan Staniszewski (No. 42) and Wade Haskins (No. 87). 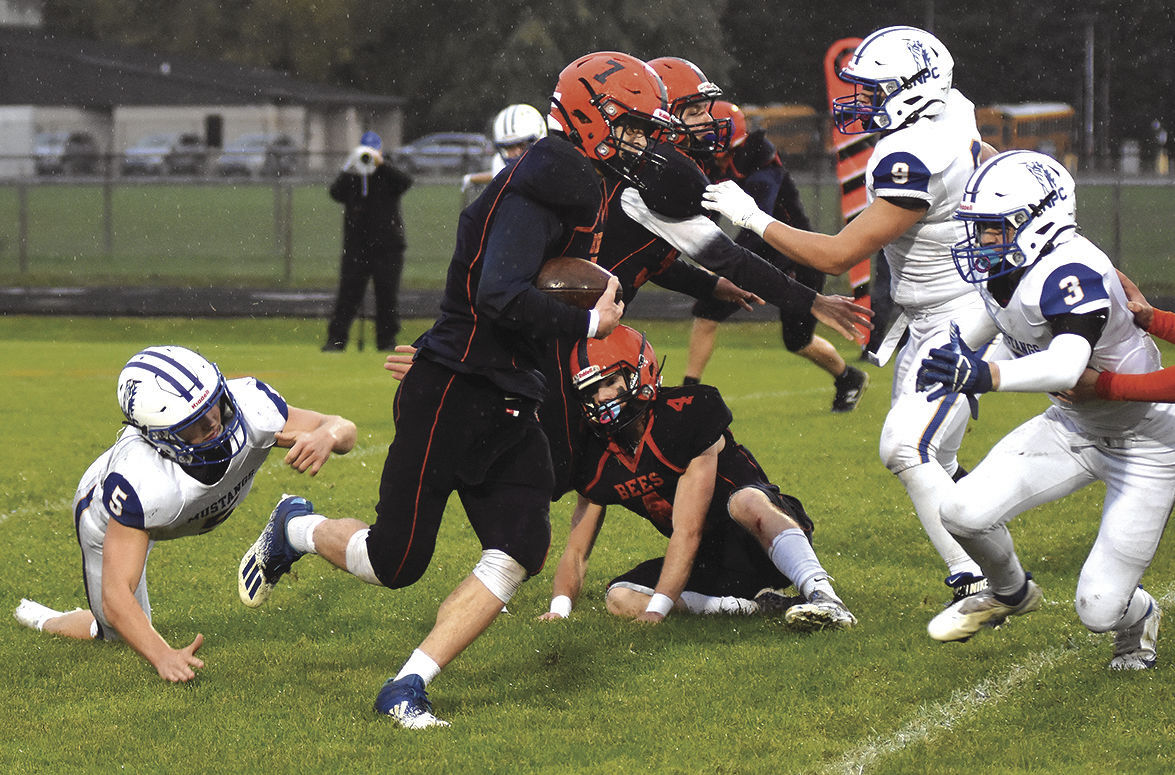 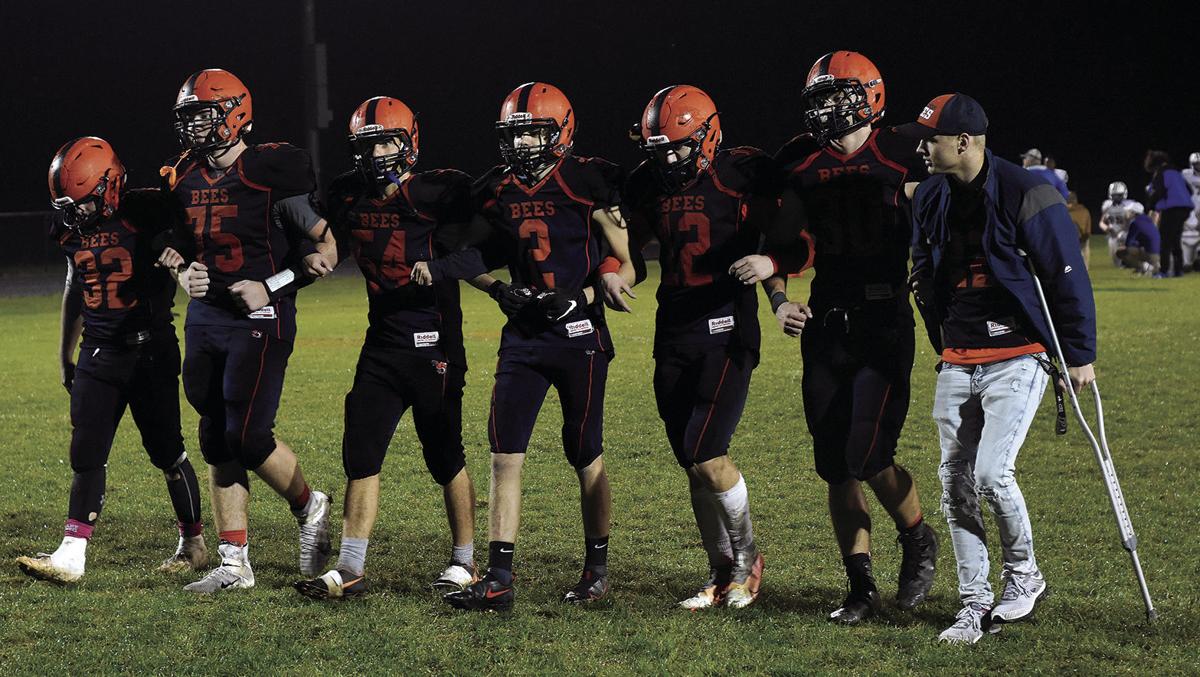 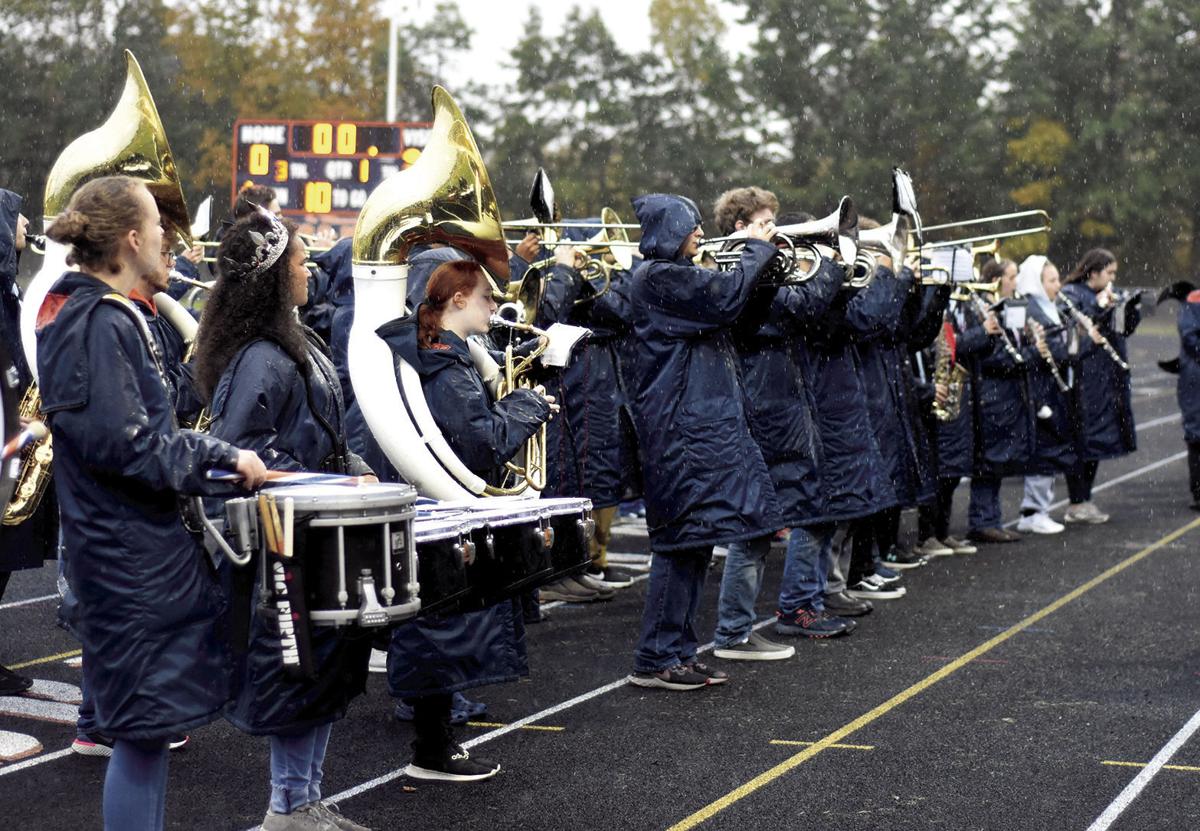 The Spirit of Bridgman Marching Band plays at the start of the season’s last game. 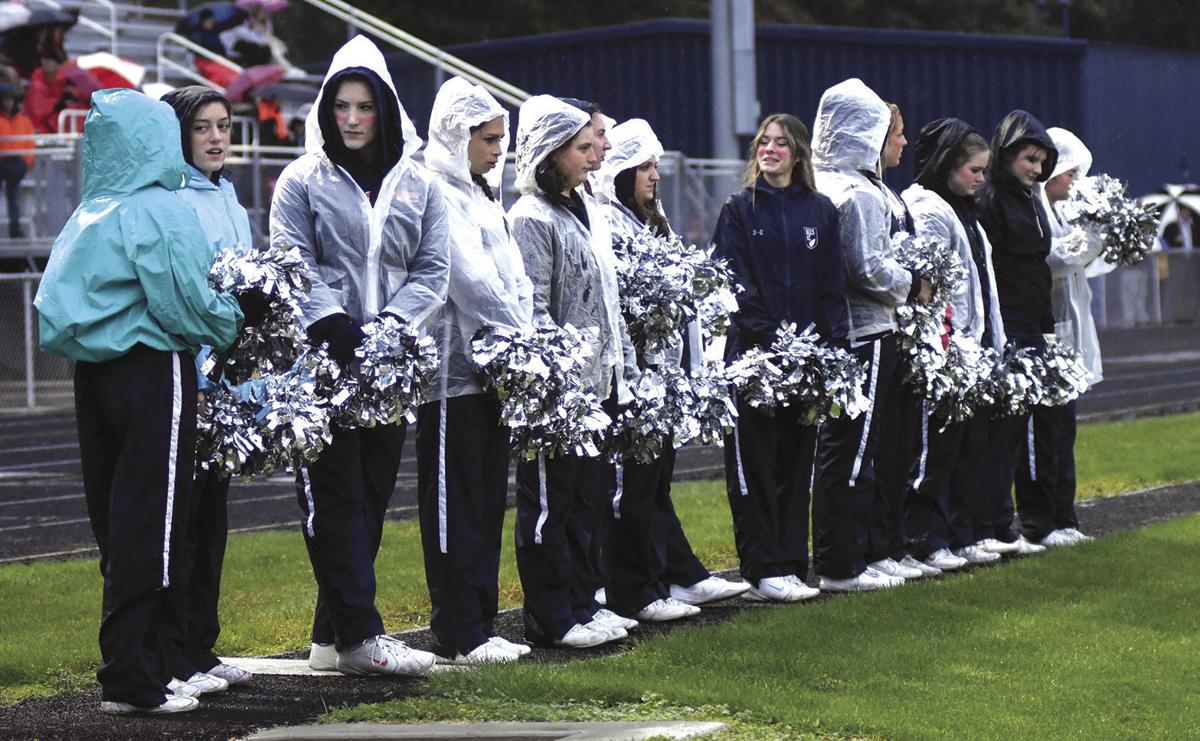 Bridgman cheerleadersa gather after the Bees scored a touchdown. 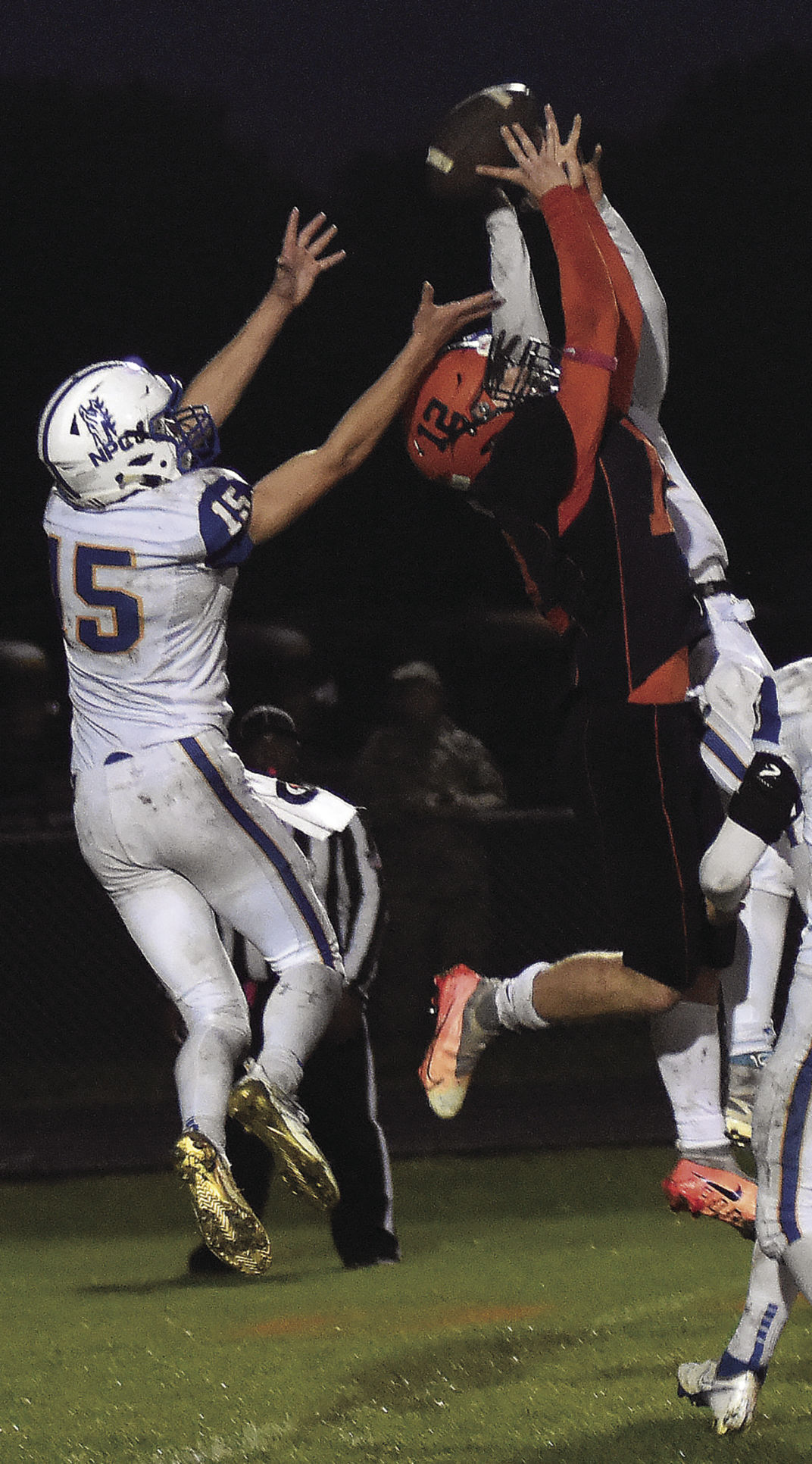 Nate Necas (center) runs through the heart of the Northpointe Christian defense on Nov. 28

Eric Braam of NorthPointe Christian (right, No. 3) tries to escape from Bridgman defenders Nolan Staniszewski (No. 42) and Wade Haskins (No. 87).

The Spirit of Bridgman Marching Band plays at the start of the season’s last game.

Bridgman cheerleadersa gather after the Bees scored a touchdown.

“We worked really hard, and when we made mistakes we fixed them fairly quickly. It was a lot of fun with these guys,” said Jayce Warren, one of the team’s seniors.

The host Bees had built a 29-0 lead late in the first half.

Quarterback Reid Haskins struck with 11:03 remaining in the opening stanza with a 51-yard TD rush and the subsequent two-point conversion scamper.

Haskins rolled into the end zone from 12 yards out at the 5:22 mark of the first quarter, and again tacked on two more to make it 16-0.

With the clock showing 42 second left in the first, Warren hauled in a 57-yard scoring strike from Nate Necas to open up a 22-0 advantage.

The lead reached 29-0 with 4:31 to go in the second frame when Warren rolled in front five yards out and Tanner Peters booted the extra point.

The Mustangs (7-3) began their comeback at the end of the first half on a 14-yard touchdown pass from John Braam to Gibson Adema. Tristan Pranger’s two-point run left the half-time score 29-8.

After a scoreless third quarter, NorthPointe Christian doubles its point total on a 31-yard rush to pay-dirt by Pranger (followed by his two-point surge).

Necas gave the home team a cushion that would later prove crucial with a 14-yard TD run with 4:40 left in regulation. Haskins tacked on two more with a conversion rush, and the Bee lead was 37-16.

With just 1:16 showing on the game clock, the Mustangs made it 37-22 as Braam fired a 26-yard scoring strike to Pranger.

Things got much more interesting when DeDe Person recovered a Bridgman fumble and returned to to the Bee 14. Braam then reached the end zone from five yards out, and Pranger just got the crucial two-point conversion, to leave the score 37-30.

With only 19.6 ticks of the clock remaining, NorthPointe players gathered in a swarm around their kicker and did the inevitable onside-boot play Braveheart style.

Peters was undaunted, falling on the football to seal Bridgman’s victory.

“I had to out my body on the line for the team to save our perfect season,” he said.

The Bees (who had already claimed a conference championship) and Mustangs were among the eight-man football teams too large for the playoff divisions currently authorized by the Michigan High School Athletic Association.

The Oct. 28 additional regular-season game for the two squads was allowed because both had picked up one of their victories by forfeit.

Bridgman coach Aaron Locke said the Bees were pushed to their limit by NorthPointe Christian in the second half.

“Our kids kept playing, and made some plays when it counted at the end, especially on special teams,” he said.

Haskins rushed for 280 yards on 28 carries. Bridgman rushed for 333 yards in total, as Necas chipped in 50 yards on 11 carries. The Bees gained 79 yards via the airways as Haskins and Necas completed 4-of-9 passes.