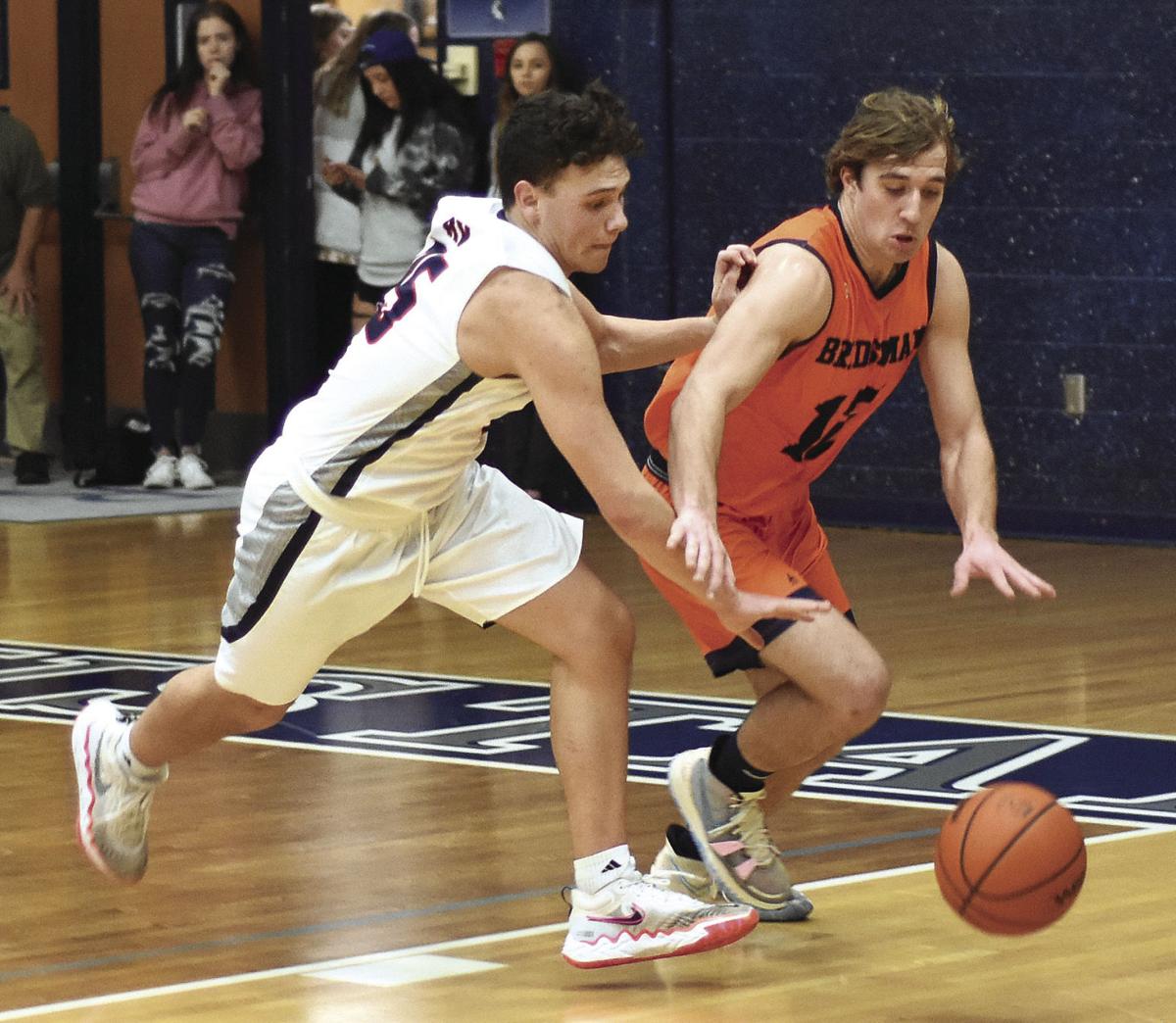 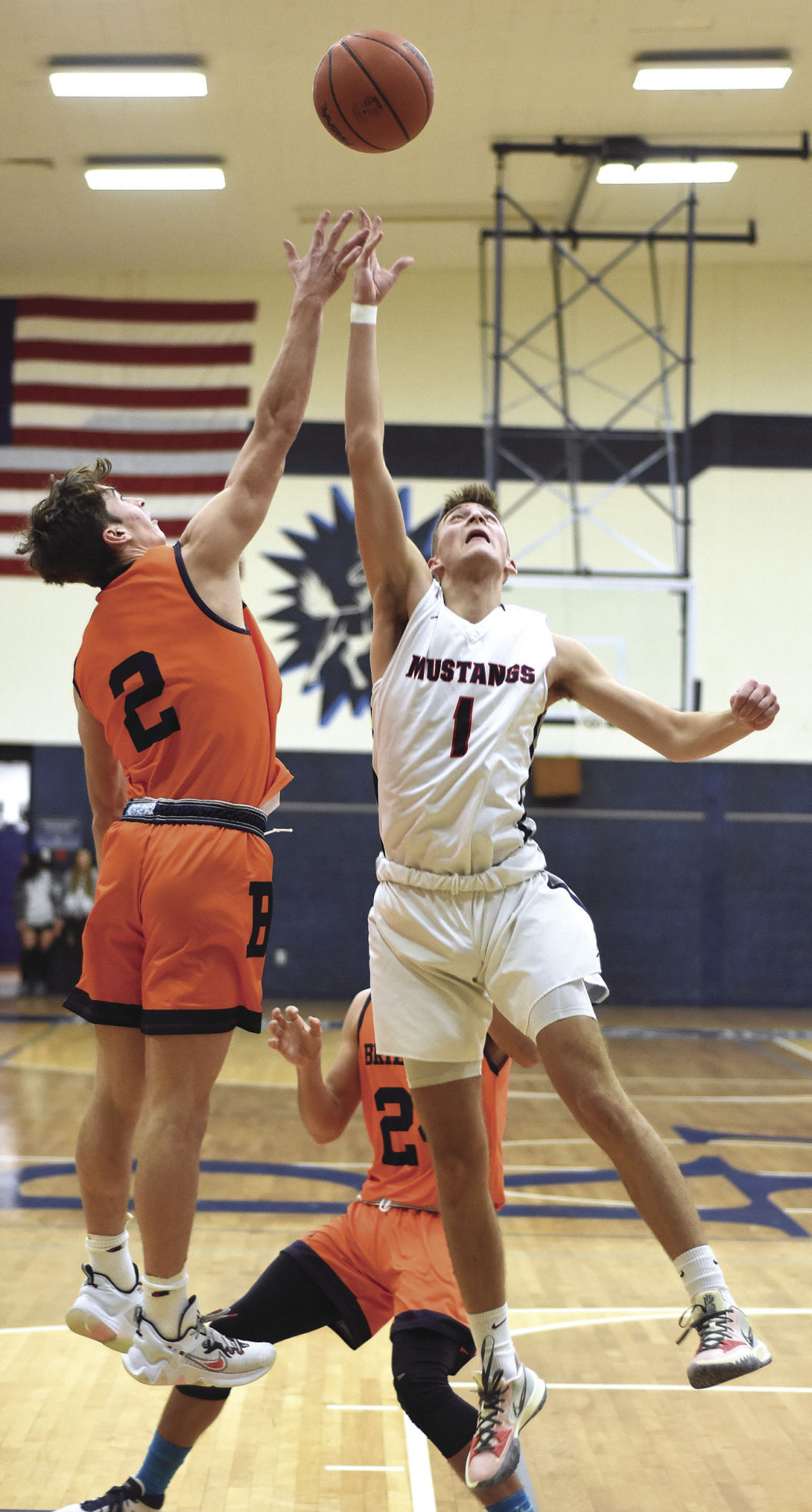 Reid Haskins of Bridgmsn (left) and River Valley’s Jayden McNabb reach for a rebound during the Dec. 30 holiday break game. 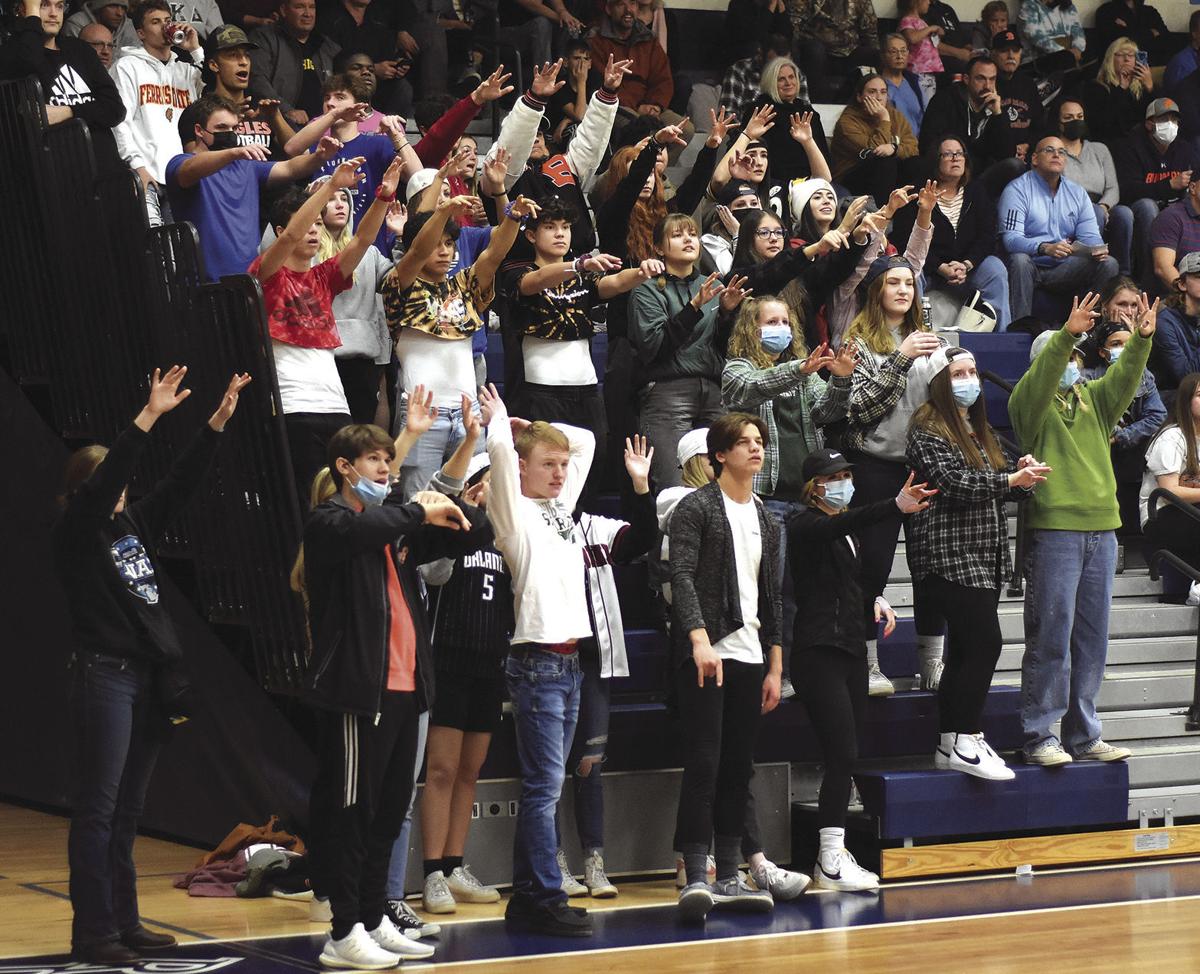 The Bridgman “Orange Crush” student section looks to will a free throw through the hoop on Dec. 30. 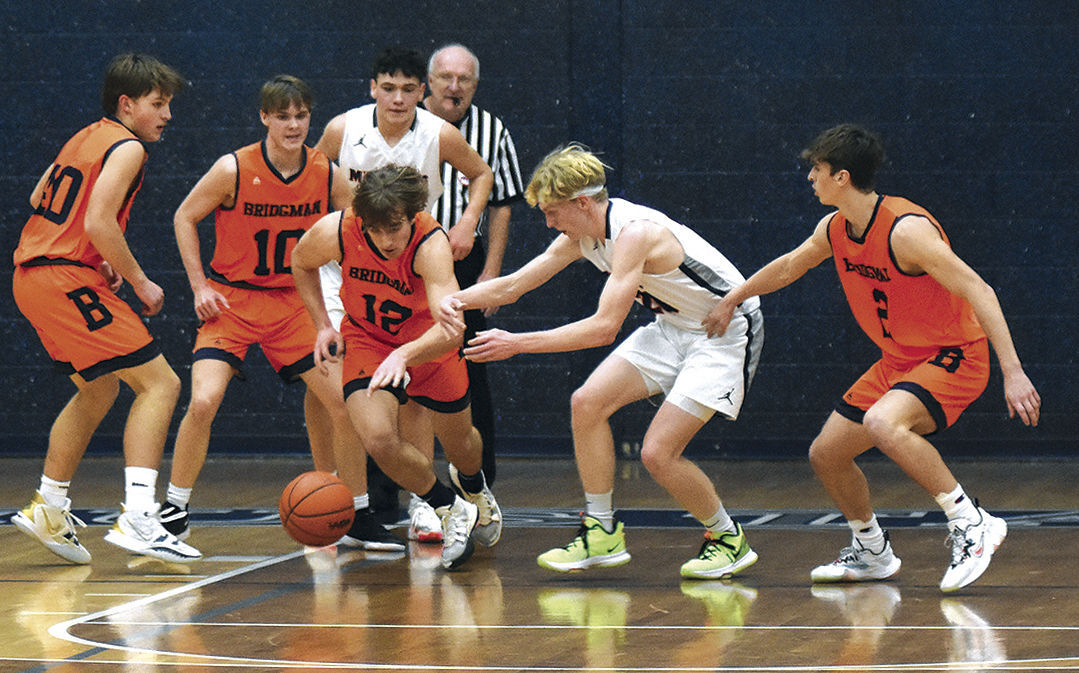 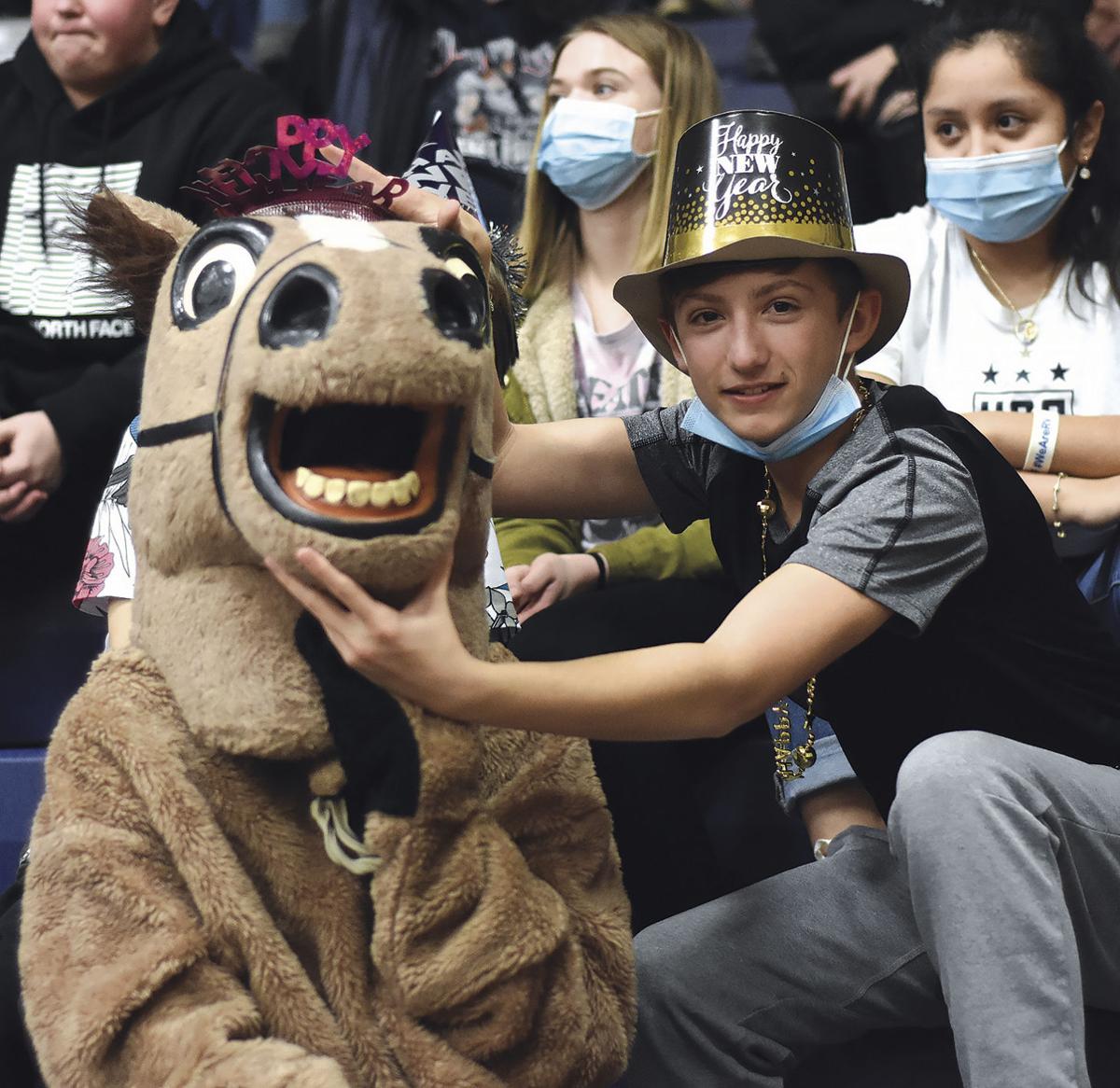 The Mustang is in the house during the Dec. 30 Bridgman-River Valley basketball game. 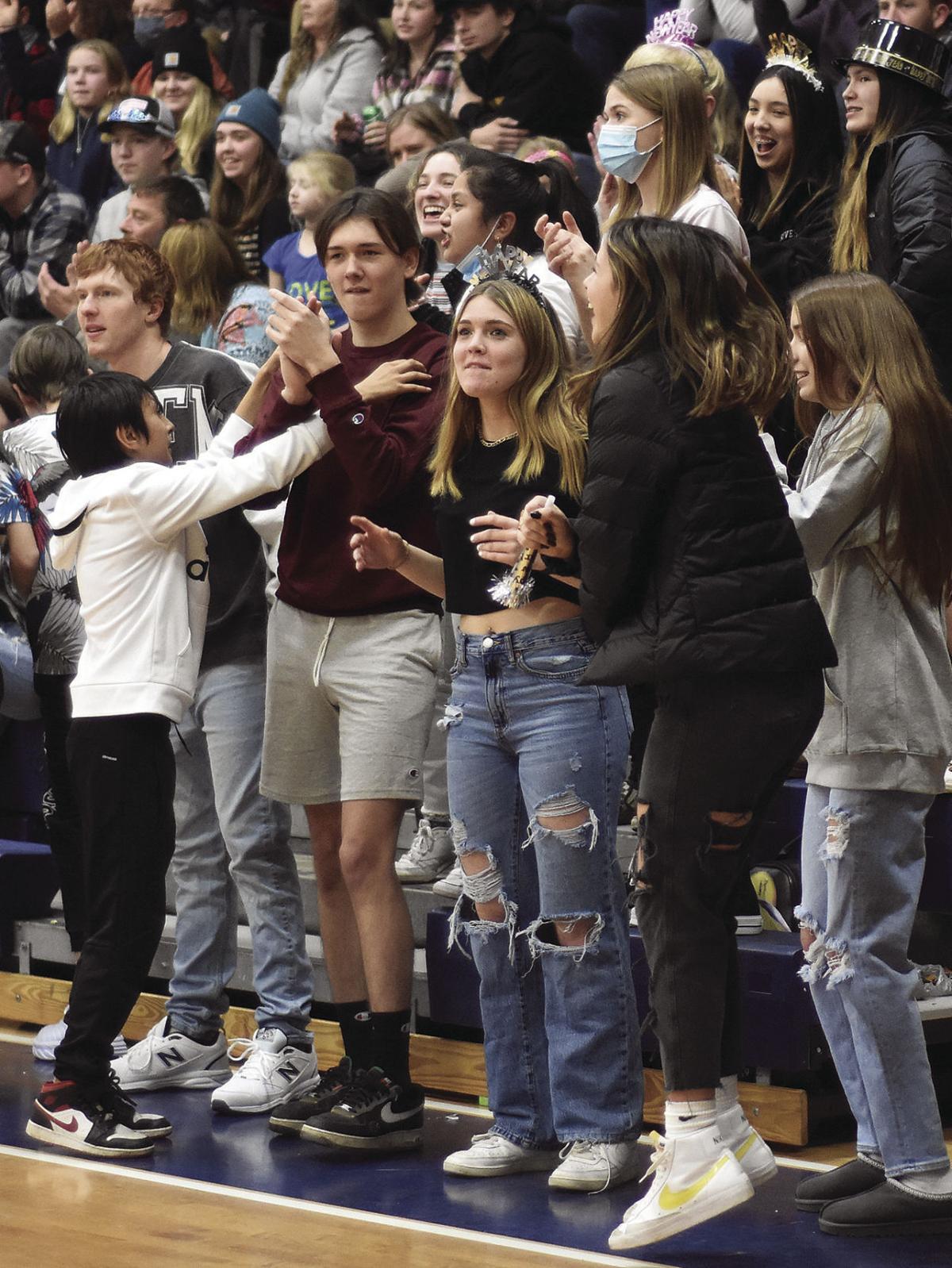 The River Valley faithful celebrate a three-point shot late in the Dec. 30 game with Bridgman. 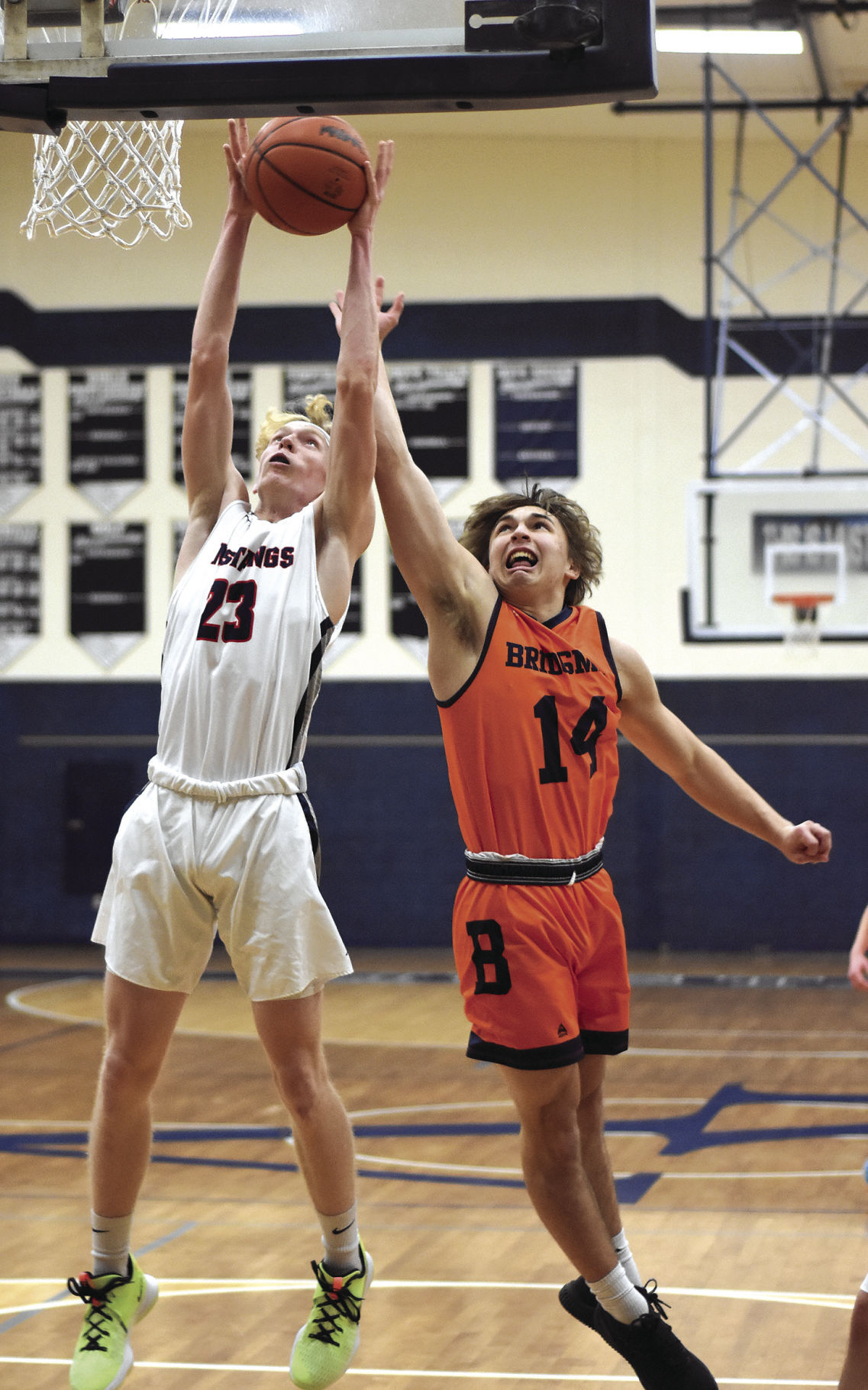 Tanner Peters of Bridgman (right) tries to get the basketball away from River Valley’s Cadden Krieger.

Reid Haskins of Bridgmsn (left) and River Valley’s Jayden McNabb reach for a rebound during the Dec. 30 holiday break game.

The Bridgman “Orange Crush” student section looks to will a free throw through the hoop on Dec. 30.

The Mustang is in the house during the Dec. 30 Bridgman-River Valley basketball game.

The River Valley faithful celebrate a three-point shot late in the Dec. 30 game with Bridgman.

Tanner Peters of Bridgman (right) tries to get the basketball away from River Valley’s Cadden Krieger.

And there was a surprise ending.

It was all Bees early as the visitors jumped out to an 11-2 advantage thanks to early three-pointers from Jayce Warren and Riley Gloe, a regulation hoop by Gloe (with an assist from Nate Necas), and John Sanderson’s scoop shot.

In a sign of things to come Jayden McNabb knocked down a “3” for RV to make it an 11-5 ballgame. Buckets by Reid Haskins and Necas helped Bridgman ramp up the lead to 19-5 after one period of play.

The Mustangs opened the second stanza by going on a 9-3 run (powered by another Jayden McNabb trey along with scores from Patrick Driscoll, Josh Seifert and Evan Gatz) to pull within eight 22-14).

The Bees built the lead back up to 10 as Sanderson sank a three-pointer and Warren scored, but a late “3” from Gatz left the half-time tally 27-20.

Bridgman out-scored River Valley 14-12 in the third quarter to lead 41-32, with Warren pouring in 9 points while Gloe connected from three-point land. Driscoll paced the Mustangs with 7 points in the period including a shot-plus-foul three-point play.

Valley had pulled within four points of the lead (44-40) midway through the final frame as Driscoll drove to the basket for two, Jayden McNabb sank a pair of shots, and Gatz knocked one down.

The Bees got some breathing room thanks to a Necas three-pointer and Warren’s three-point play, only to have consecutive “3s” from Jayden McNabb tie things up at 50-50 at the 1:33 mark of the fourth quarter.

A pair of Warren free throws with 1:22 remaining and a bucket by Jayden McNabb 10 seconds hence closed out the scoring in regulation, and the first overtime session began with the score knotted at 52-all.

Only four total points were tallied in the first extra session as Haskins scored in the paint for Bridgman and Driscoll went 2-for-2 at the line for River Valley.

The lead changed hands four times as the second OT got rolling – Jayden McNabb opened the scoring with a jumper, Sanderson sank a three-pointer, McNabb hit a runner, and Dylan Reisig was on the mark from outside for the Bees. All of this left Bridgman clinging to a 59-58 lead, which was bolstered with 31 seconds to go by a pair of Warren foul shots.

Jayden McNabb made a clutch jumper with 16 seconds showing on the clock to pull River Valley within a point (61-60), but a 1-for-2 trip to the stripe by Necas upped with Bee lead to 62-60 with less than 10 seconds remaining.

Driscoll brought the Mustang faithful to their feet with just four seconds left by drilling what appeared to be the game-winning three-point shot, but on the ensuing in-bounds play with time nearly expired and the action on the court a combination of celebration and desperation there was a collision that sent Warren to the free-throw line with 1.2 seconds remaining.

The senior calmly knocked down both opportunities and the Bees emerged triumphant by a 64-63 margin.

“I was able to drive to the basket and get some points, and I also got some kick-out shots,” Warren said of being able to score enough in the second-half to hold off the surging Mustangs.

“I thought we had a really good first half … We shot really well early from the three-point line,” said Bridgman coach Mike Miller, who noted that Jayden McNabb’s performance for the Mustangs was impressive.

“He does a lot of really good things on the court,” he said.

“Down the stretch I though we fought,” said River Valley coach Tyler Haske, who said he didn’t see enough fight in the first half.

“Coming into the game … I thought we’d be a lot tougher than that.”

But Haske said he saw a lot of positive things down the stretch.

The unbeaten Bison are scheduled to host River Valley on Jan. 10.