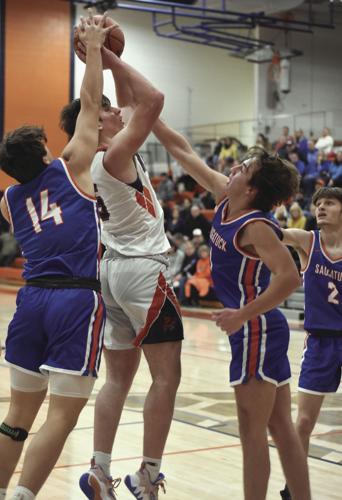 Bridgman’s Wade Haskins (with ball) looks to score against a trio of Saugatuck defenders on Dec. 6. 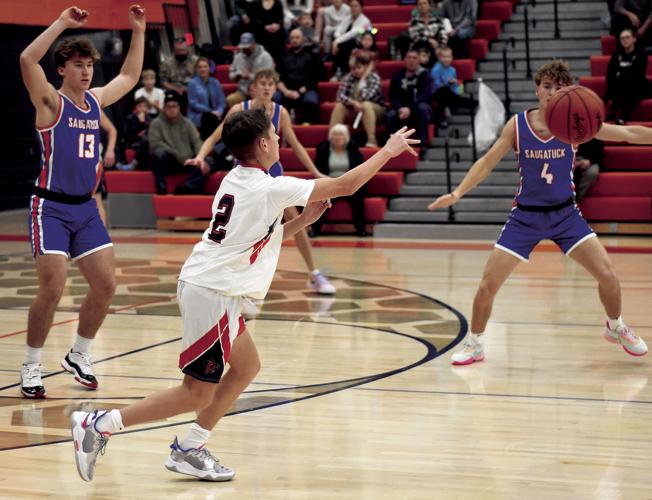 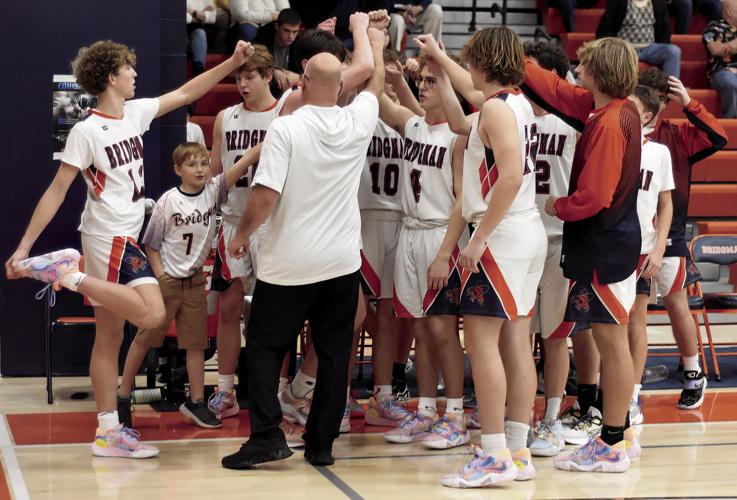 Bridgman players and head coach Mike Miller huddle in the late-going of the Dec. 6 home opener.

Bridgman’s Wade Haskins (with ball) looks to score against a trio of Saugatuck defenders on Dec. 6.

Bridgman players and head coach Mike Miller huddle in the late-going of the Dec. 6 home opener.

BRIDGMAN — A thrilling finish that began and ended with steals (plus a game-winning shot sandwiched in between) was the difference as Bridgman won its Dec. 6 boys varsity basketball opener against Saugatuck by a 58-57 tally.

Trailing 57-53 with less than a minute to go in overtime, the host Bees cut the margin to a single point on Wade Haskins’ shot-plus-foul three-point play.

The Trailblazers were looking to run out the clock when Ethan Stine picked off a pass and fired the basketball to Charlie Pagel, who then relayed the rock to John Sanderson who sank a clutch go-ahead basket.

“We switched on the screen and I was just in the right spot at the right time,” Stine said.

Sanderson said he threw the shot up and after a few nervous moments it ended up going in.

Saugatuck scrambled to set up one last shot, but Pagel closed the door for good by snagging an errant pass as time ran out.

“I was just waiting for the ball,” Pagel said. “We have a great trust in all of our teammates and we were just right place, right time. Coach drew it up and we executed it good.”

Bridgman held the lead for much of the contest, leading 15-11 after one period and 29-20 at half-time.

The Trailblazers began the third quarter on a 9-0 run to forge a tie score. The Bees answered with eight straight points (including consecutive three-pointers by Pagel), but Saugatuck proved persistent.

Scores by Carter Miller and Cass Stanberry (a “3”) left Bridgman clinging to a 40-39 margin heading into the final frame.

The fourth quarter opened with three-point hoops by Will Ayers of the Trailblazers and Bridgman’s Riley Gloe. The lead changed hands five times down the stretch until consecutive treys by Miller opened up a 51-46 Saugatuck advantage.

The Bees caught up (and forced overtime) thanks to a score by Sanderson (assisted by Haskins) and Pagel’s three-pointer.

Saugatuck tallied the first four points of the extra session on baskets by Matt Hartgerink and Landon Miller.

Head coach Mike Miller said his players were resilient in the face of Saugatuck’s runs.

“For a first game we’re really happy to get a victory in overtime. It was an exciting night,” he said.