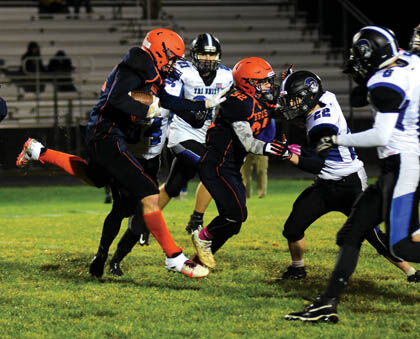 Bridgman's Jayce Warren (left) runs behind a block by teammate Nate Necas during the Oct. 23 game against Wyoming Tri-Unity. The Bees rallied from a 47-0 deficit to win on Homecoming night. 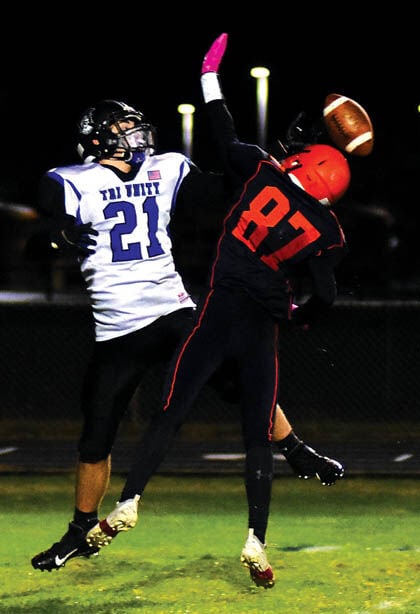 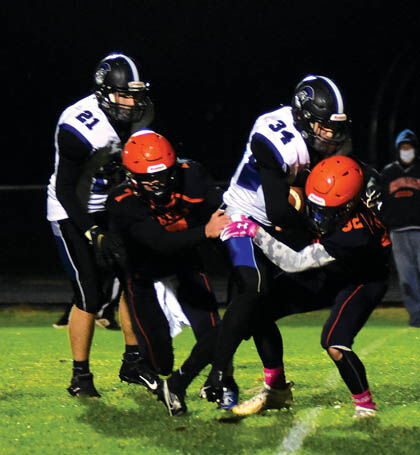 Bridgman's Jayce Warren (left) runs behind a block by teammate Nate Necas during the Oct. 23 game against Wyoming Tri-Unity. The Bees rallied from a 47-0 deficit to win on Homecoming night.

BRIDGMAN — The 2020 Bridgman High School Homecoming football game seemed lost as the first half was winding down on Friday, Oct. 23.

Visiting Wyoming Tri-Unity Christian had rolled up a seemingly insurmountable 47-0 lead, while the host Bees were struggling to run offensive plays and had already turned the ball over several times.

Bridgman finally scored twice in the late-going of the second quarter.

Sophomore quarterback Reid Haskins reached the end zone from seven yards out with just 5.8 seconds left in the half.

On its ensuing possession the Defenders fumbled on a pitch play, and Bee defender Nate Necas scooped up the football and scampered 37 yards to pay-dirt with zeros showing on the clock. A two-point conversion run by Haskins cut the deficit to 47-14.

The momentum from those two scores carried into the second half with a vengeance as the home team exploded for 33 unanswered points to force overtime.

Haskins ran wild over the last two quarters, reaching the end zone from 1, 10 and 33 yards out. The 33-yard sprint tied the score at 47-all with 2:08 remaining in the fourth quarter.

Necas scored twice in the third period during the comeback — via a 17-yard scoring strike from Haskins and on a 48-yard punt return. He also recovered a fumble ahead of the tying score.

The Defenders temporarily re-took the lead in overtime as Joshua Rillema rolled in from 10 yards out. But the ensuing two-point conversion attempt failed.

Haskins returned the favor with a 10-yard touchdown run of his own.

Tanner Peters then lined up for a point-after kick that ended up being the difference in Bridgman's 54-53 victory.

"Last week we put in an extra point — we hadn't done that in over a year," said Bridgman head coach Aaron Locke.

He said the team made a lot of mistakes and had very few yards in the first half, adding that the players basically "got fed up and did something about it."

Locke said the young Bees (there is one senior on the roster) were a different team in the second half.

"I think they were feeling the momentum."

The Defenders (2-4) scored early and often in the first half. Rillema ran for four TDs, while quarterback Jaden Ophoff and Braiden Luurtsema also rushed into the end zone.

"They came to play," said Locke.

Bridgman (5-1) now owns the state record for the biggest come-from-behind victory, eclipsing a 32-0 deficit that Ionia made up while playing McBain in 2017 in 11-man football.

The Bees are scheduled to host Concord at 7 p.m. Friday, Oct. 30, as part of a four-team tournament of eight-man teams from districts too large to qualify for the state playoffs.