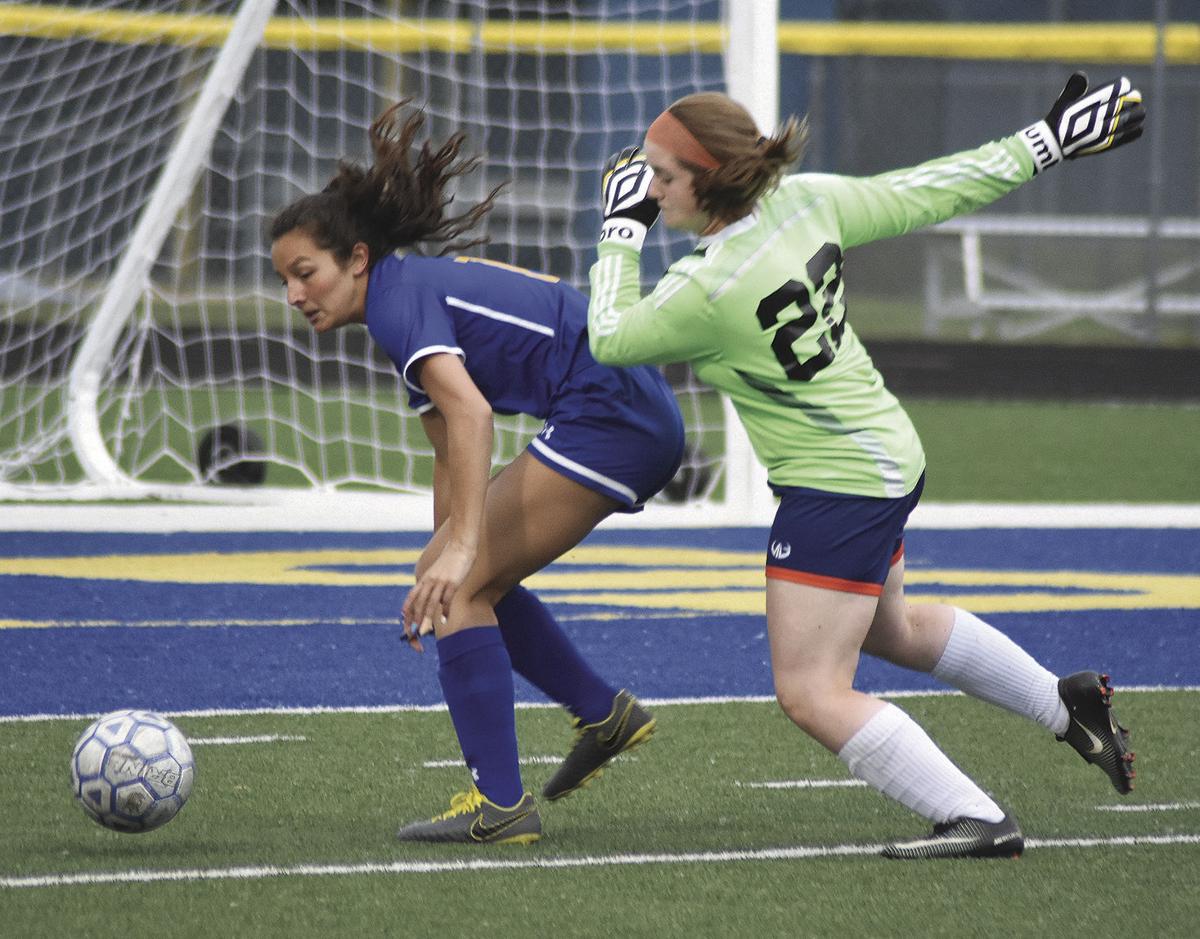 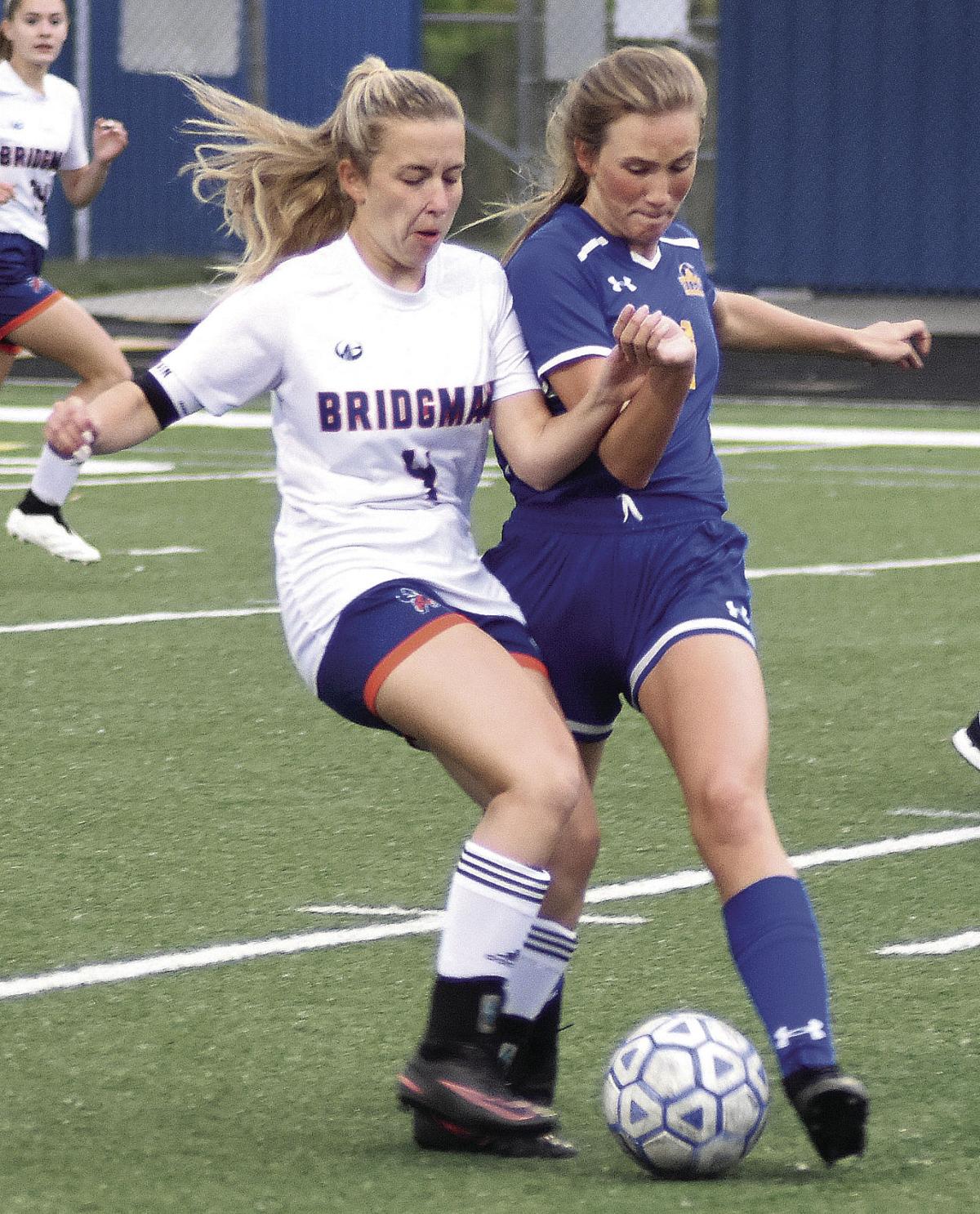 Bridgman’s Lily Badger (left) and Kelsey Corkran of New Buffalo during the May 27 district soccer match. 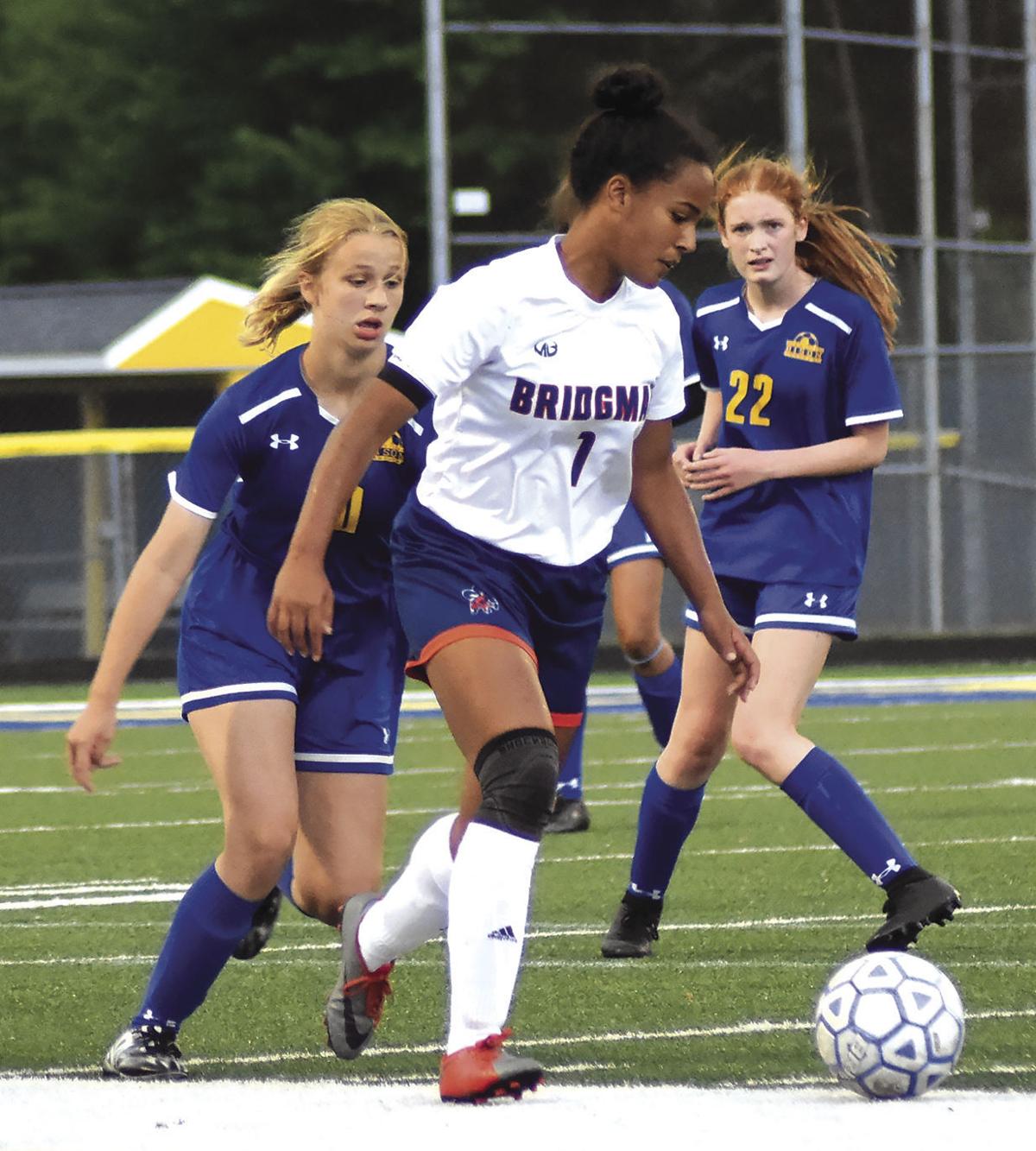 Bridgman’s Olivia Tomlin (center) looks to get open against the New Buffalo defense on May 27. 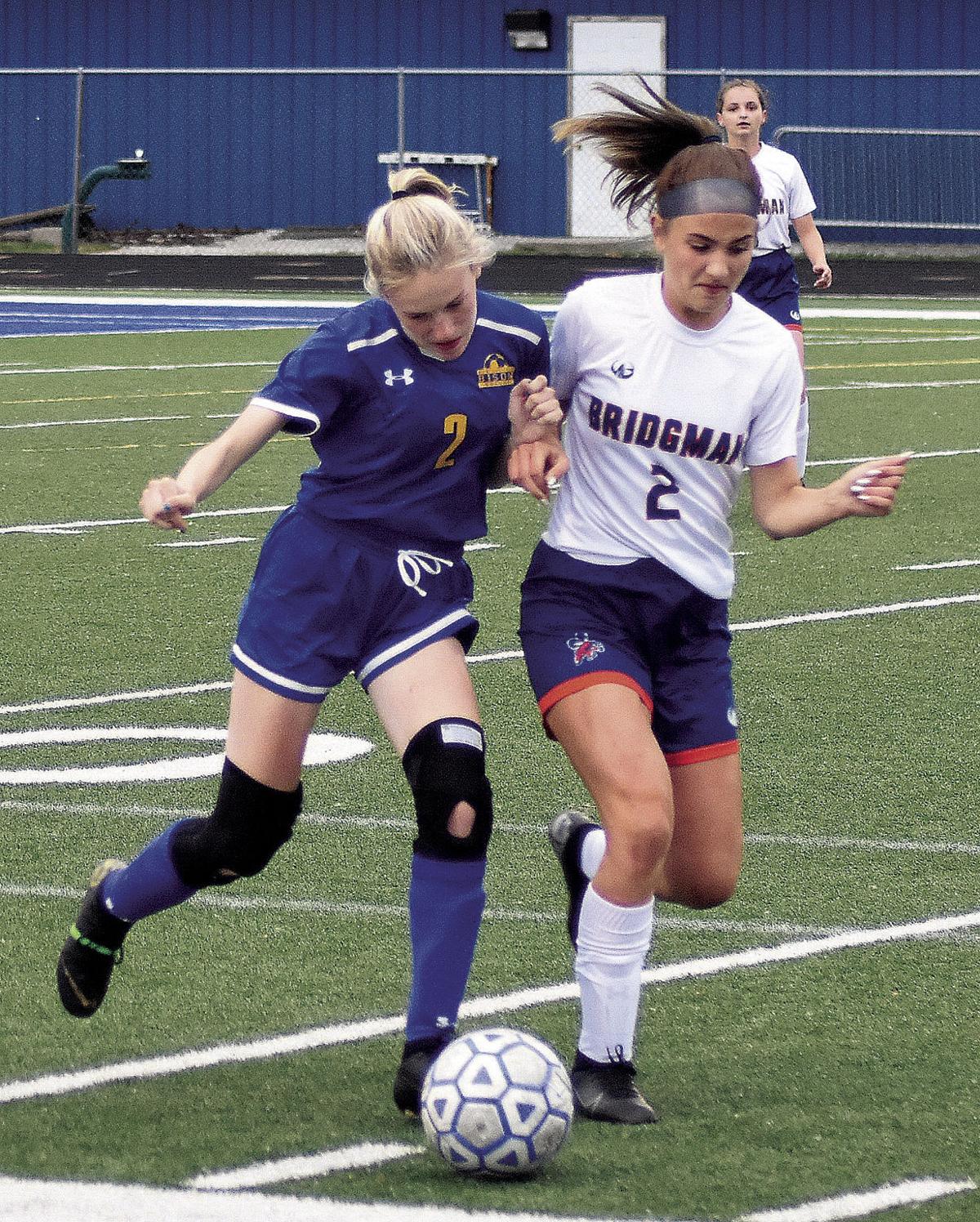 Sarah Walters of New Buffalo (left) and Bridgman’s Emmy Dinges battle for position on May 27. 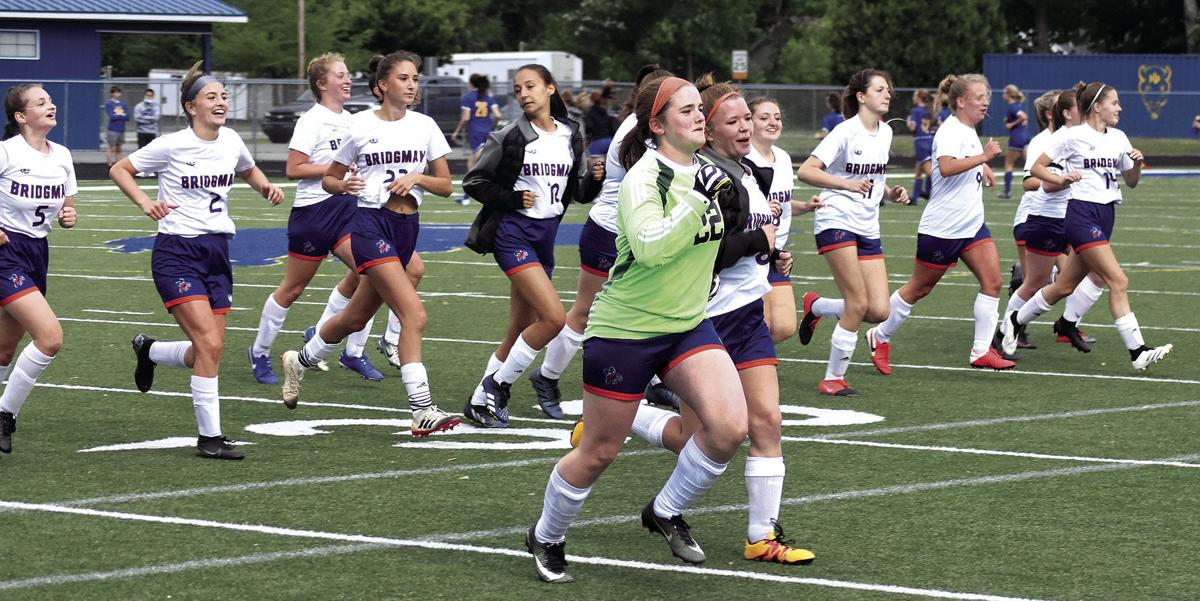 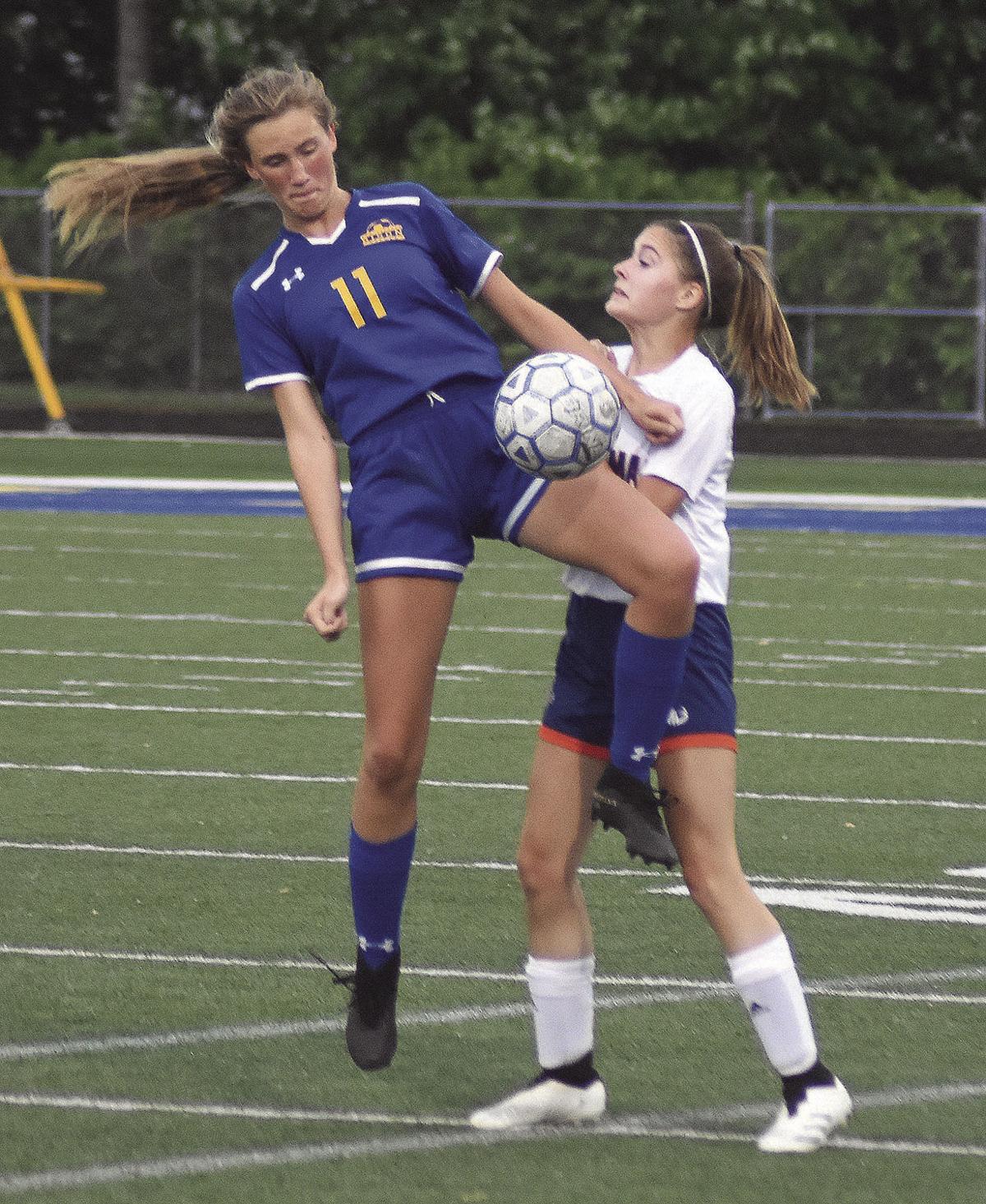 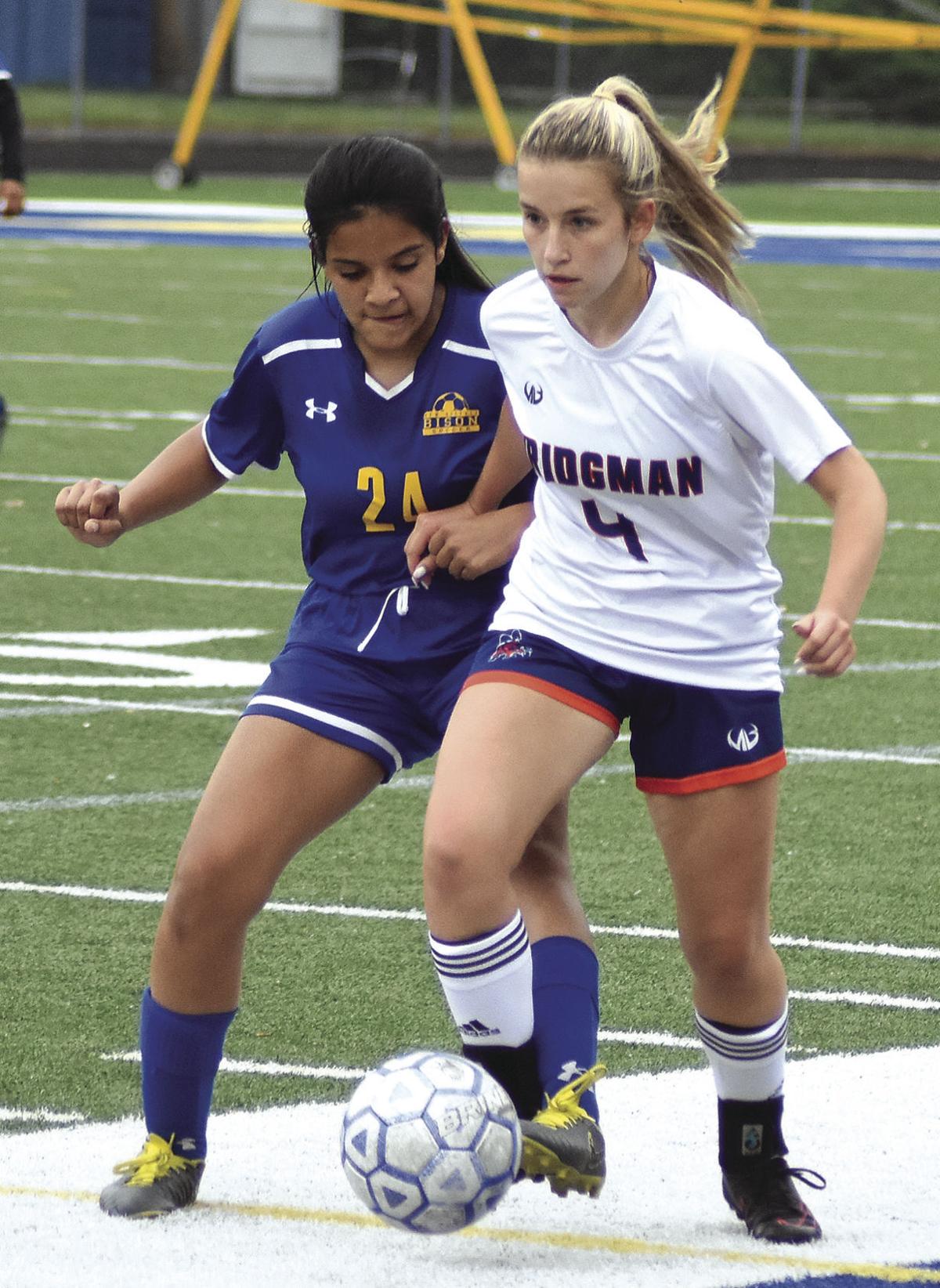 Bridgman’s Lily Badger (left) and Kelsey Corkran of New Buffalo during the May 27 district soccer match.

Bridgman’s Olivia Tomlin (center) looks to get open against the New Buffalo defense on May 27.

Sarah Walters of New Buffalo (left) and Bridgman’s Emmy Dinges battle for position on May 27.

The visiting Bees scored first, as Graci Tate booted in a cross-net pass from teammate Olivia Tomlin with 35:28 to go in the first half.

Bridgman goalkeeper Emma Boughner stopped a penalty kick by New Buffalo’s Sophia DeOliveira at the 28:55 mark of the first half.

The Bison pulled even with 33:22 mark of the second half when Corkran scored off a corner kick by Georgia Arvanitis.

“I actually played floor hockey for a few years, so I kind of just take from that … and Tae Kwon Do too,” she said.

Tomlin scored what would turn out to be the winning goal with 8:43 remaining when her low kick in the rain narrowly escaped the grasp of NB goalkeeper Nadia Collins. Morgan Granzow was credited with the assist.

“We always say that the rain’s our lucky charm,” Tomlin said, later adding “We all played really hard.”

New Buffalo staged a series of attempts to score a tying goal in the late going before a final clear by Bridgman’s Lily Badger sealed the victory.

“This was a big team win for us, and I’m really proud of the girls,” Badger said.

“We knew it would be a close game, and sometimes the ball doesn’t bounce your way. Tonight it did, and that was good for us,” said Bridgman Coach Nick Foxworthy.

New Buffalo coach Erik Beers said the Bison had some great chances to score in the second half.

“Their goalie, give her credit, she made a lot of great saves,” he said.

New Buffalo blanked the Bees 2-0 less than a week earlier (May 19), with DeOliveira scoring both goals.

The Bees were scheduled to face Lake Michigan Catholic at 6 p.m. Wednesday, June 2, on the Lakers’ home field.