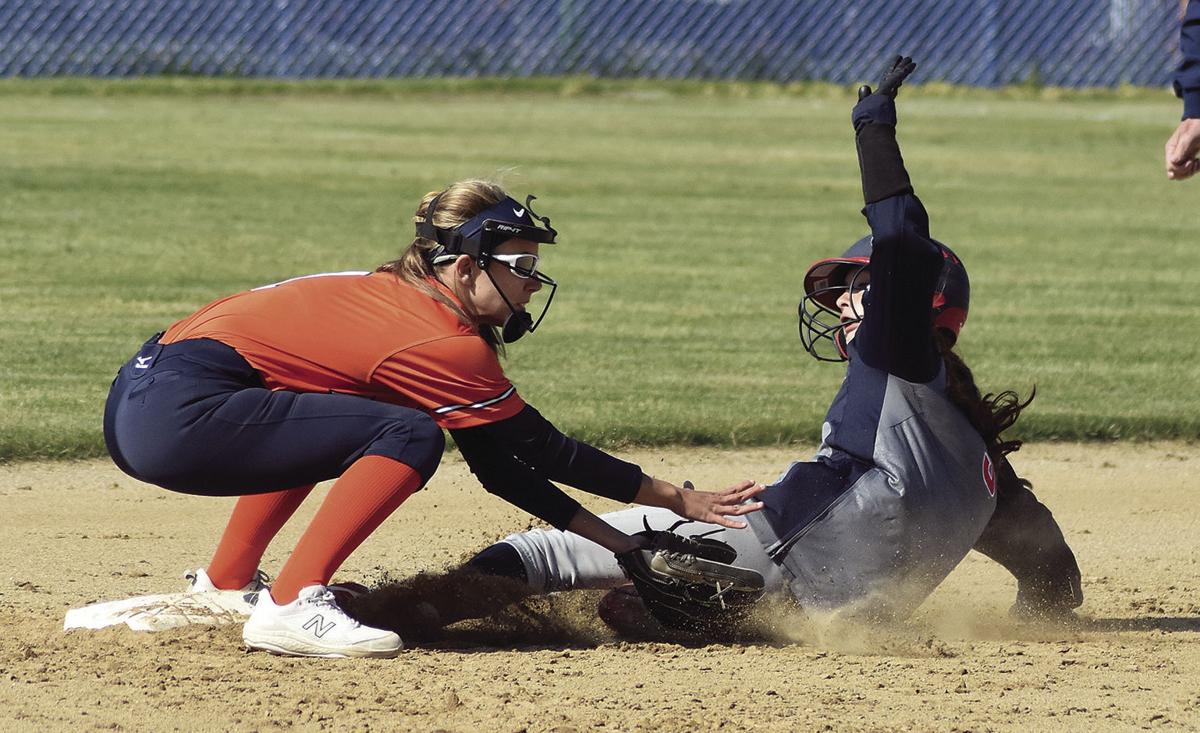 River Valley’s Kursten Smith (right) slides into second base on May 10 while Bridgman infielder Peyton Oman looks to tag her out. 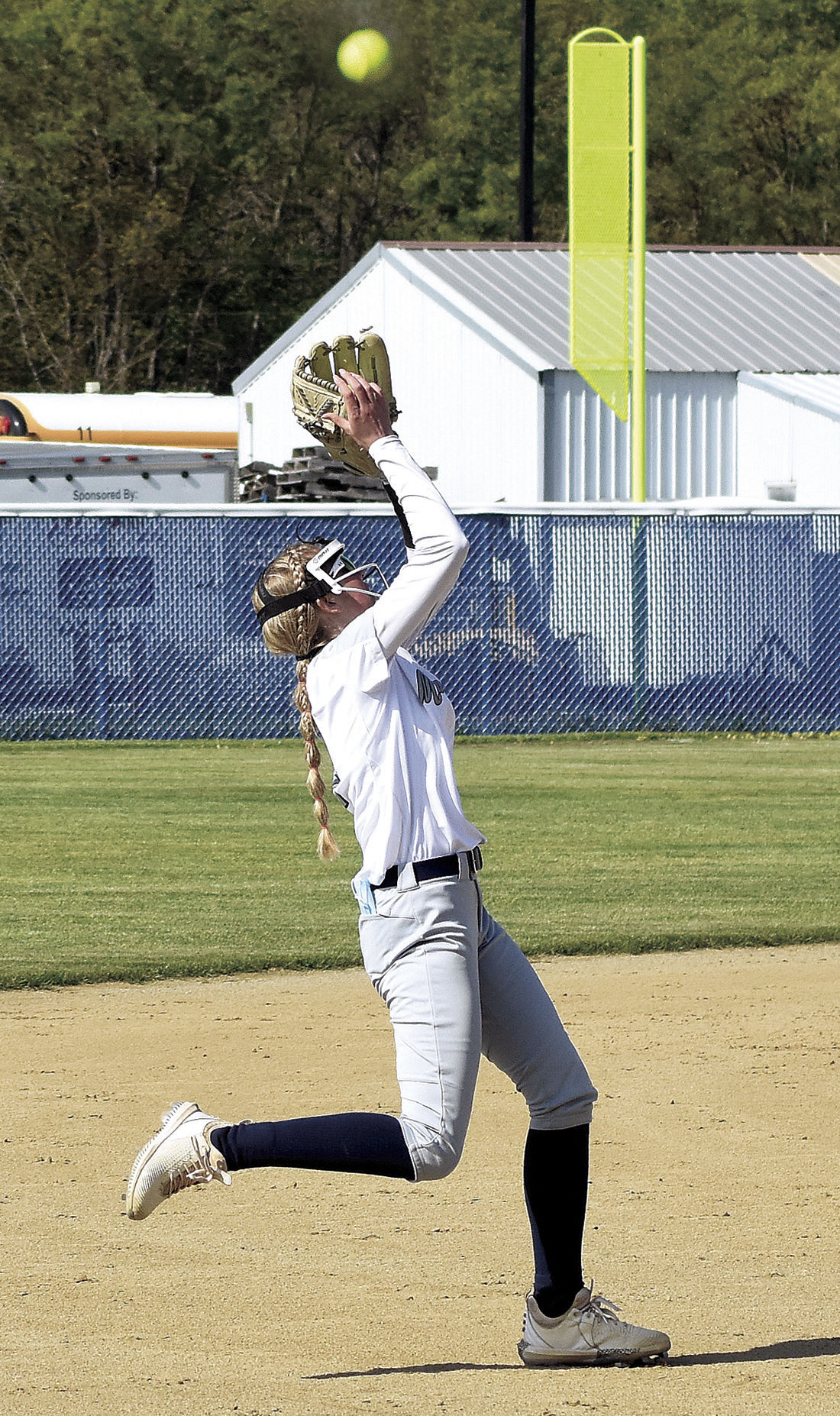 River Valley shortstop Hanah Lynch reaches for a flyball during a May 10 game against Bridgman. 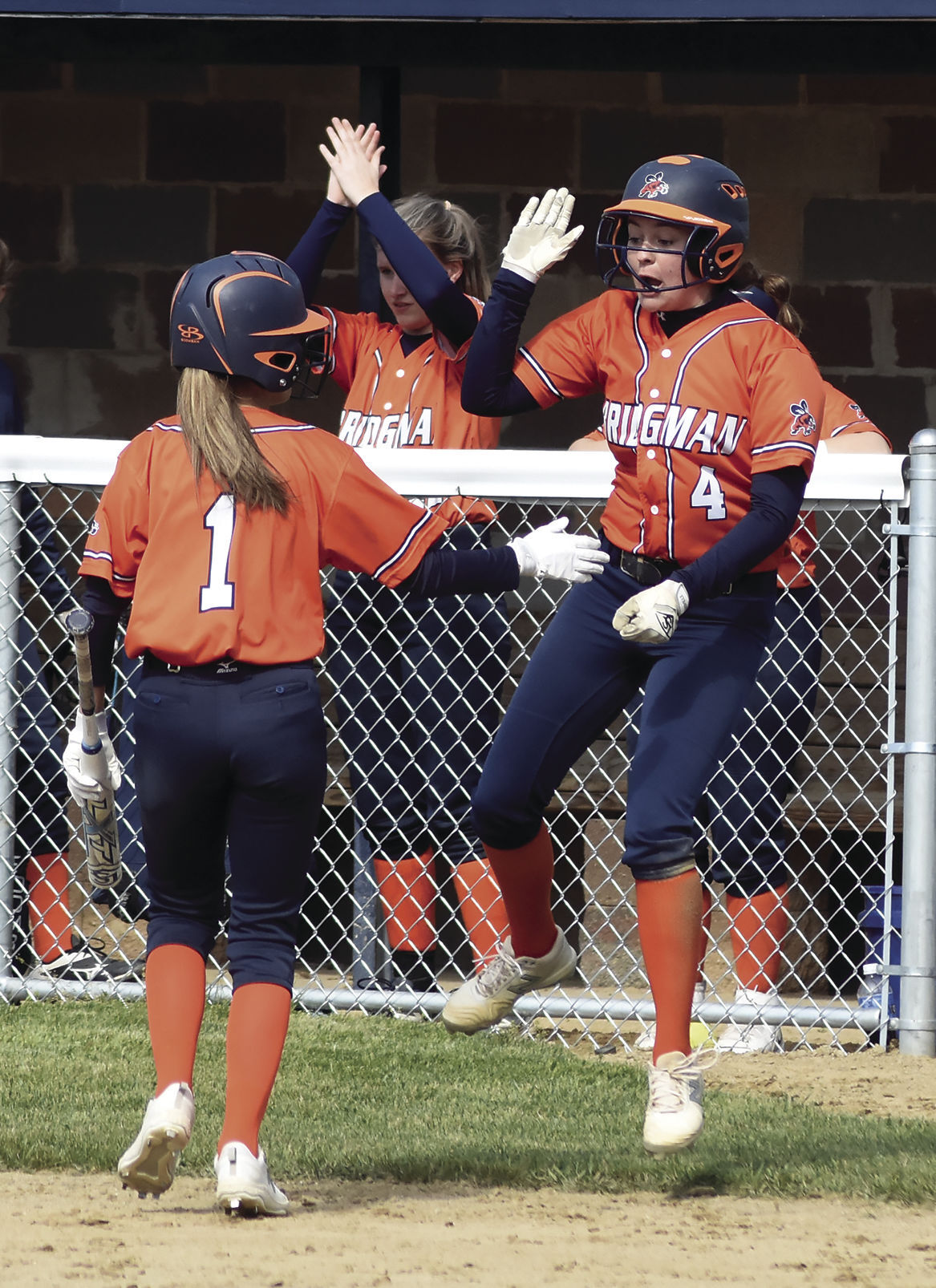 River Valley’s Kursten Smith (right) slides into second base on May 10 while Bridgman infielder Peyton Oman looks to tag her out.

River Valley shortstop Hanah Lynch reaches for a flyball during a May 10 game against Bridgman.

THREE OAKS — The Bridgman high school softball team came into a May 10 doubleheader at River Valley trailing the Mustangs by a game in the BCS White Division standings.

They left ahead by a game following a 6-1, 13-2 sweep. Valley had topped the Bees 1-0 on their home turf April 26. Both squads are still slated to play a pair against New Buffalo (currently holding down third place in the league). The Bees are ranked fifth in the state in Division 4, RV is eight and the Bison are an honorable mention selection.

The May 10 opener was a rematch of the pitchers who dueled in the earlier 1-0 nail-biter – Macey Springer of River Valley and Bridgman’s Natalee McNeil.

The Mustangs scored their lone run of the opener in the first inning. Kursten Smith reached base on a dropped third strike, Springer singled to short right field, and Smith later came home from third thanks to a wild pitch.

The 1-0 lead lasted until the top of the third inning when Arie Hackett walked, stole second base, and scored on a double off the bat of Kaylee Shuler. Peyton Oman then drew a walk, McNeil put the ball in play and Shuler beat the ensuing throw to home plate for a 2-1 lead. Bella Gearhart later hit into a throwing error that resulted in two more runs to give the Bees a 4-1 advantage.

Bridgman tacked on two more in the sixth frame as Elise Schmaltz walked, Hackett hit into a throwing error, Oman walked to load the bases, and McNeil lashed a two-run base hit.

McNeil said the Bees were determined to make a strong showing coming into the doubleheader.

“Every singe person came to play today,” she said.

The second contest saw Bridgman take a first-inning lead as Hackett led off with a walk and Shuler smacked a two-run homer over the left field fence.

The Bees seemed poised to up that margin in the fourth frame as Hannah Johnson doubled and Gearhart beat out a throw to first. But River Valley pitcher Lexi McCarty was able to get the next three outs, and the Mustangs took advantage in their half of the inning to tie things up.

Hanah Lynch’s one-out single, an RBI triple by McCarty, and Taylor Volstorf’s elusive infield squibber that brought McCarty home forged the 2-2 tie, but Bee hitters gave their pitcher (Hannah Johnson) an enormous amount of offensive support in the top of the fifth.

Hackett led off with a walk and steal, Shuler hit into a run-scoring error, Oman swatted the softball into left field where it got away to bring in another run, McNeil hit a liner down the third-base line to make it 5-2, Johnson walked, Gearhart smacked a two-run double, Emme Slavens walked, Haylee Kanous was hit by a pitch, Hackett walked in run number eight, Shuler lined a two-run single, Oman walked, and Johnson ripped a two-run single off an infielder’s glove.

Bridgman (21-1) finished with nine hits. Shuler went 3-for-4 with a home run, three runs scored and three RBI; Johnson and Gearhart each finished with two hits and two runs batted in; Hackett and Oman both scored three runs.

“I thought that as a team we all hit pretty well today,” Shuler said. “This is one of our beset-hotting games, best defensive games. RV’s a good team, but we really brought it today and I’m really proud of everybody.”

Johnson allowed three hits, one earned run and one walk while striking out six over five innings.

Bridgman coach Elaine Starbuck said her players were trying to focus on quality at-bats and staying off pitches outside the strike zone.

“The last time we played we were going after stuff that we shouldn’t have. They played great, RV’s a great team.”