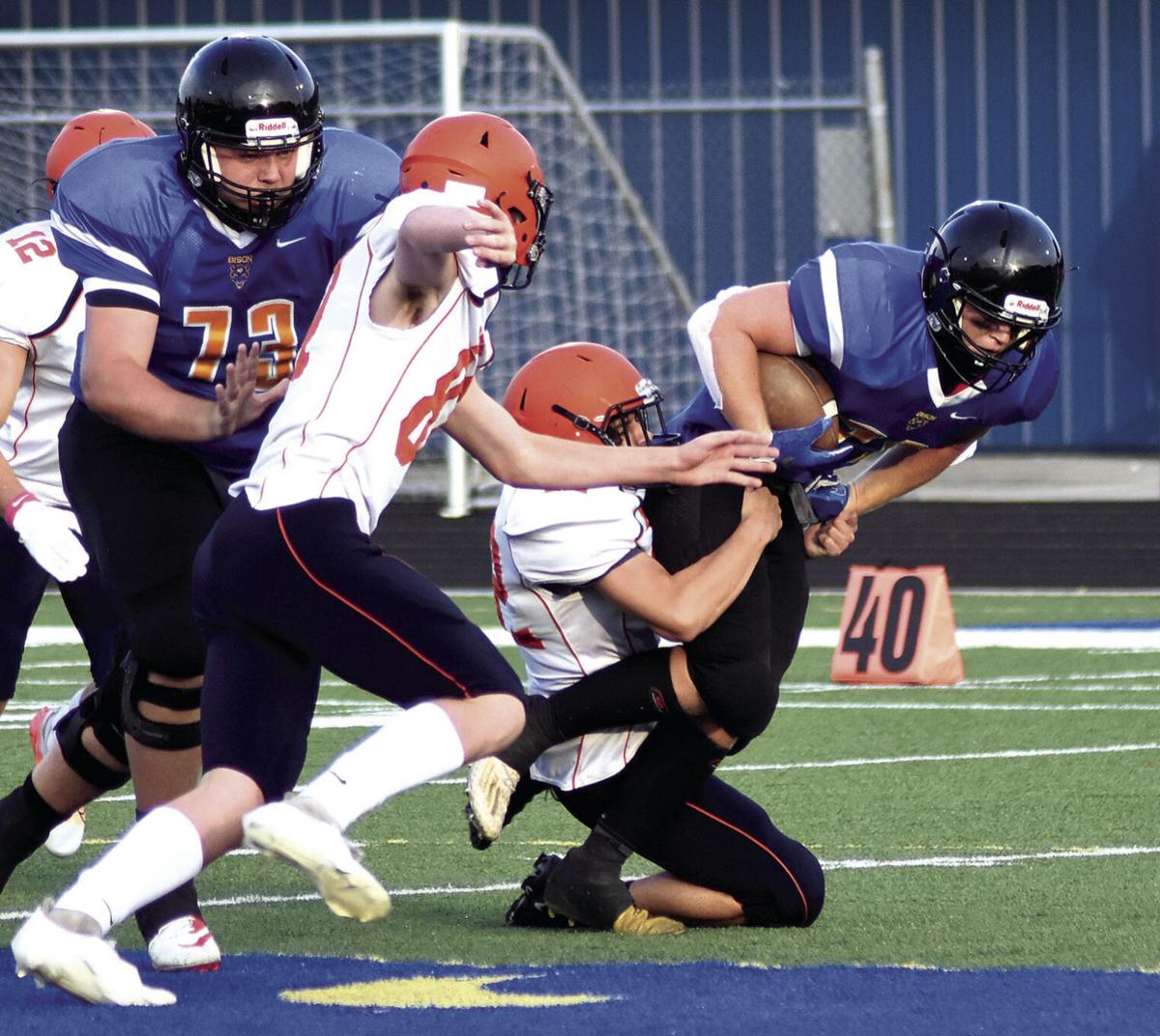 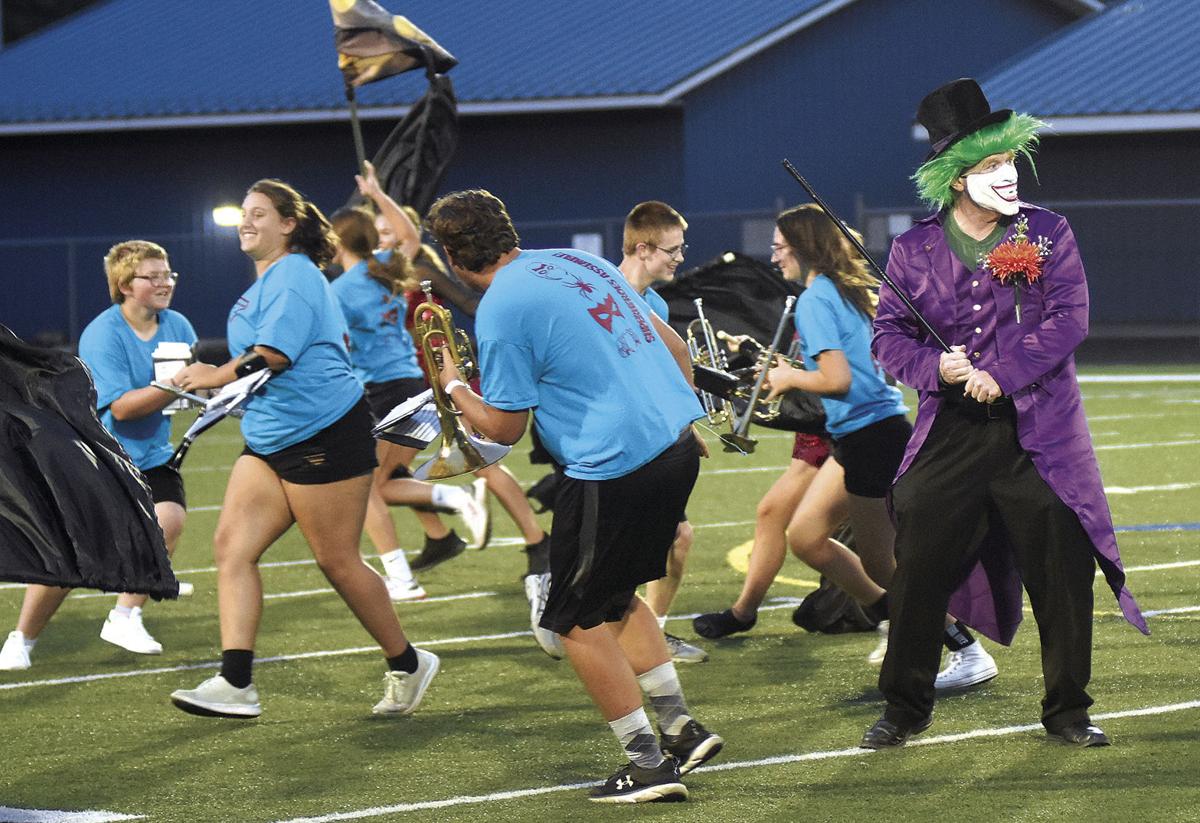 The New Buffalo High School Marching Band’s half-time show on Sept. 2 was temporarily interrupted by a “Joker” of a villain who disappeared as quickly as he had appeared. 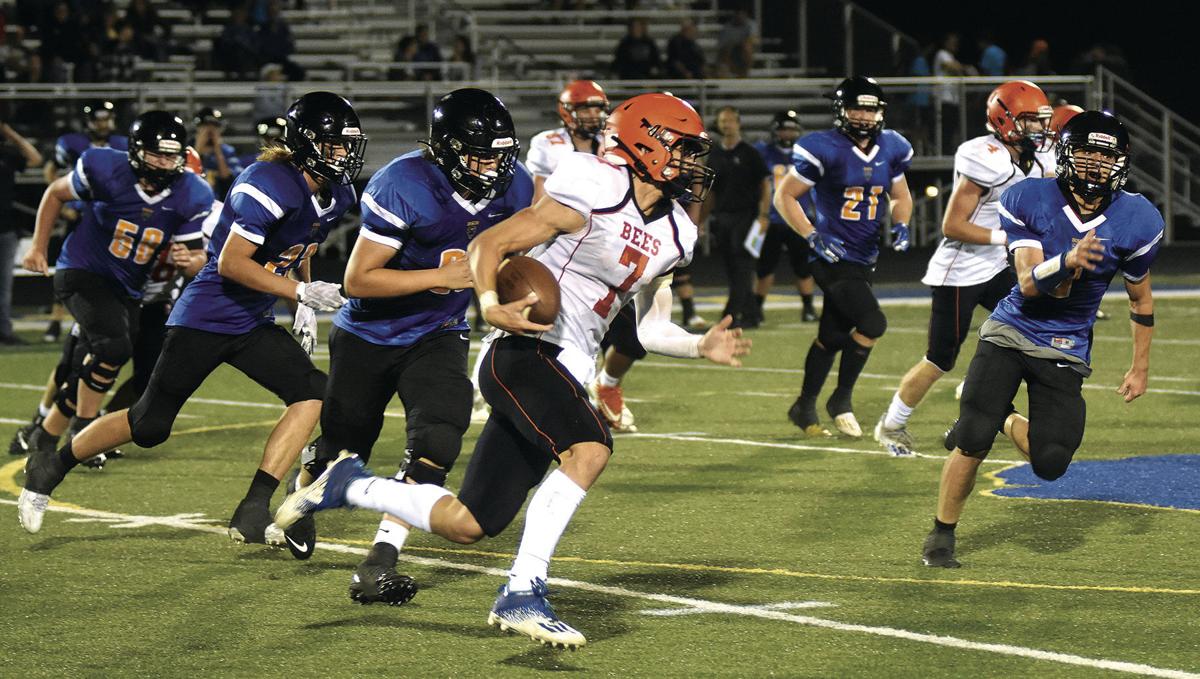 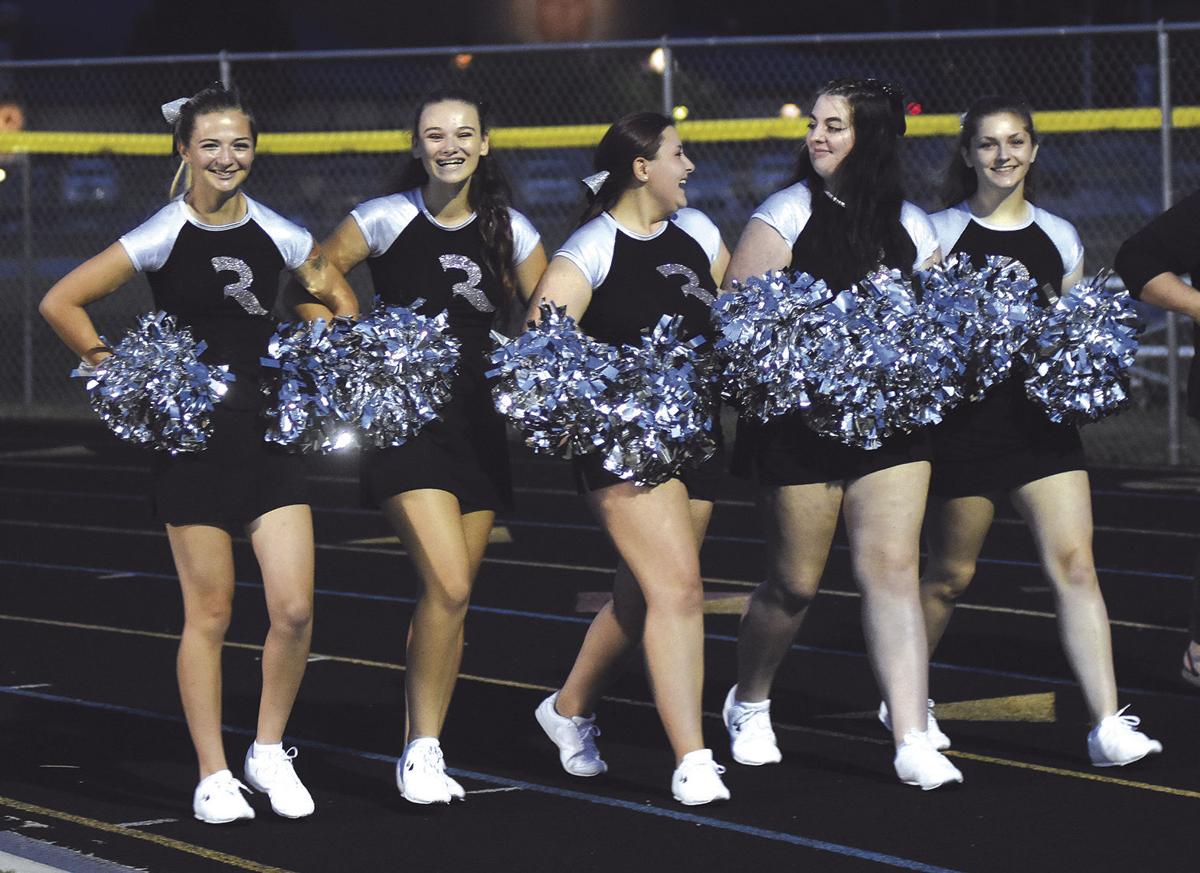 Red Arrow Raiders cheerleaders make the trek to the Bridgnan side of the field on Sept. 2. 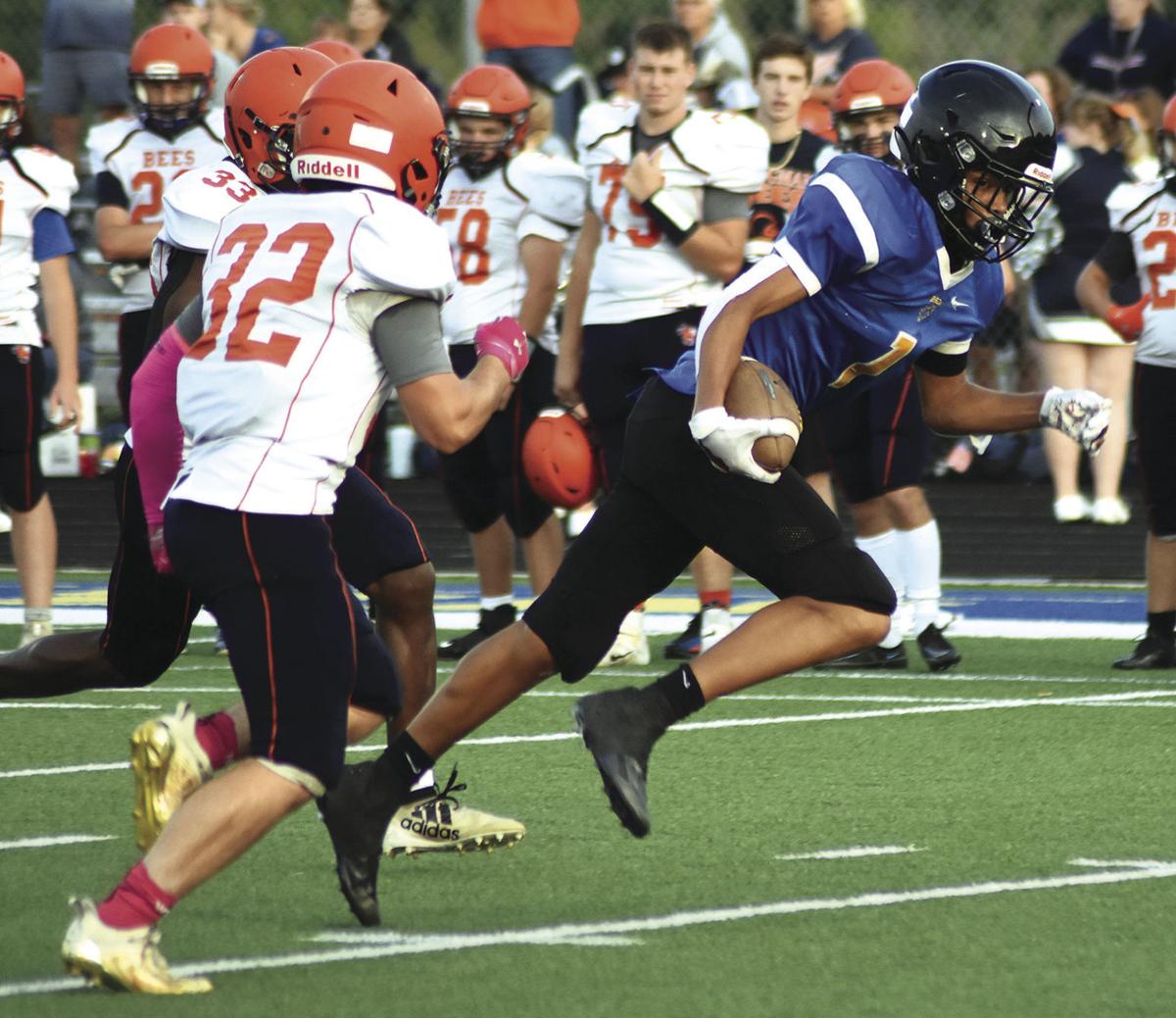 Eli Thomas of the Red Arrow Raiders (right) breaks away from the Bridgnan defense on Sept. 2. 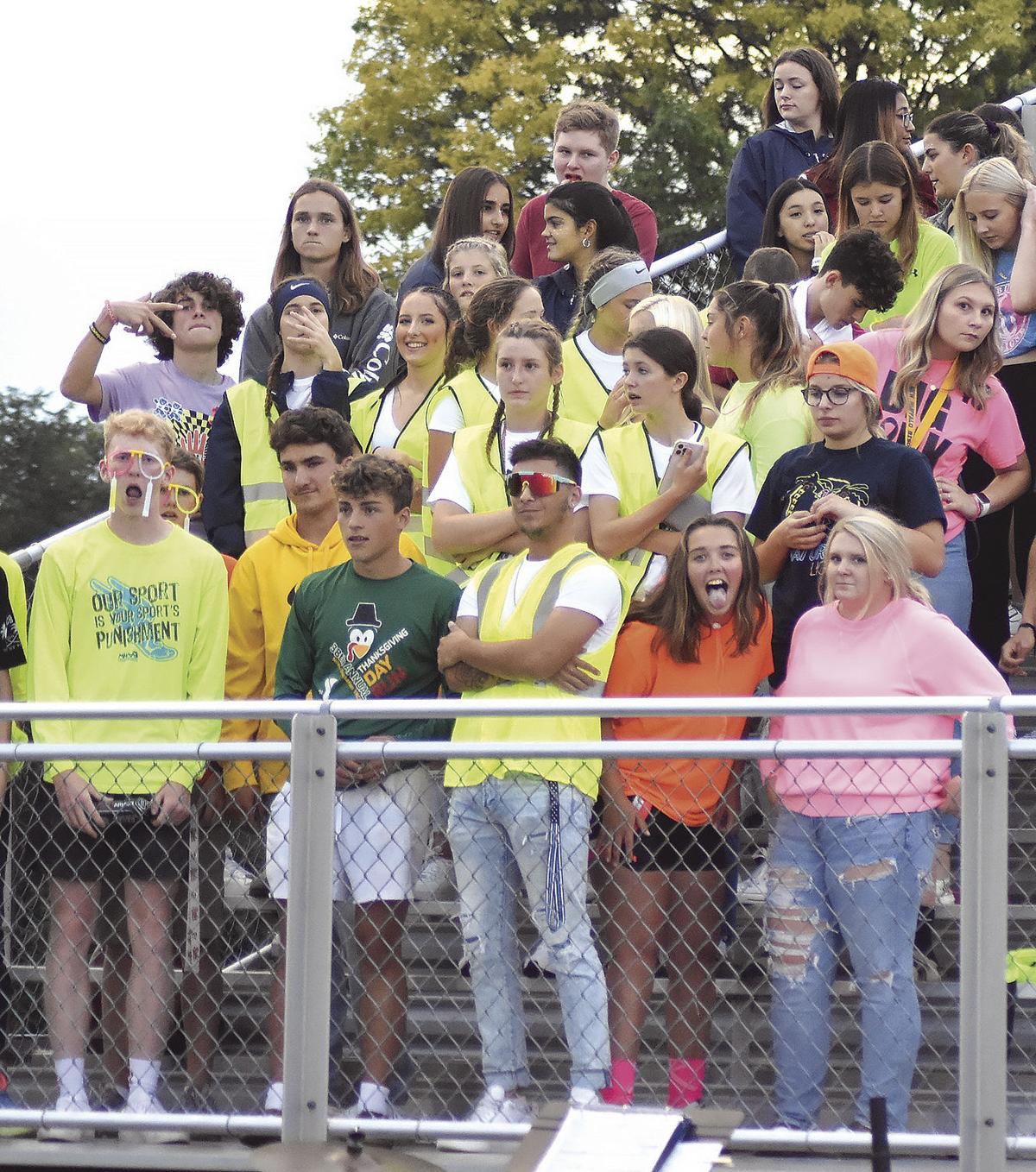 The Raiders student section cheers on their team.

Member sof the Red Arrow Raiders line up ahead of the Sept. 2 kick-off. 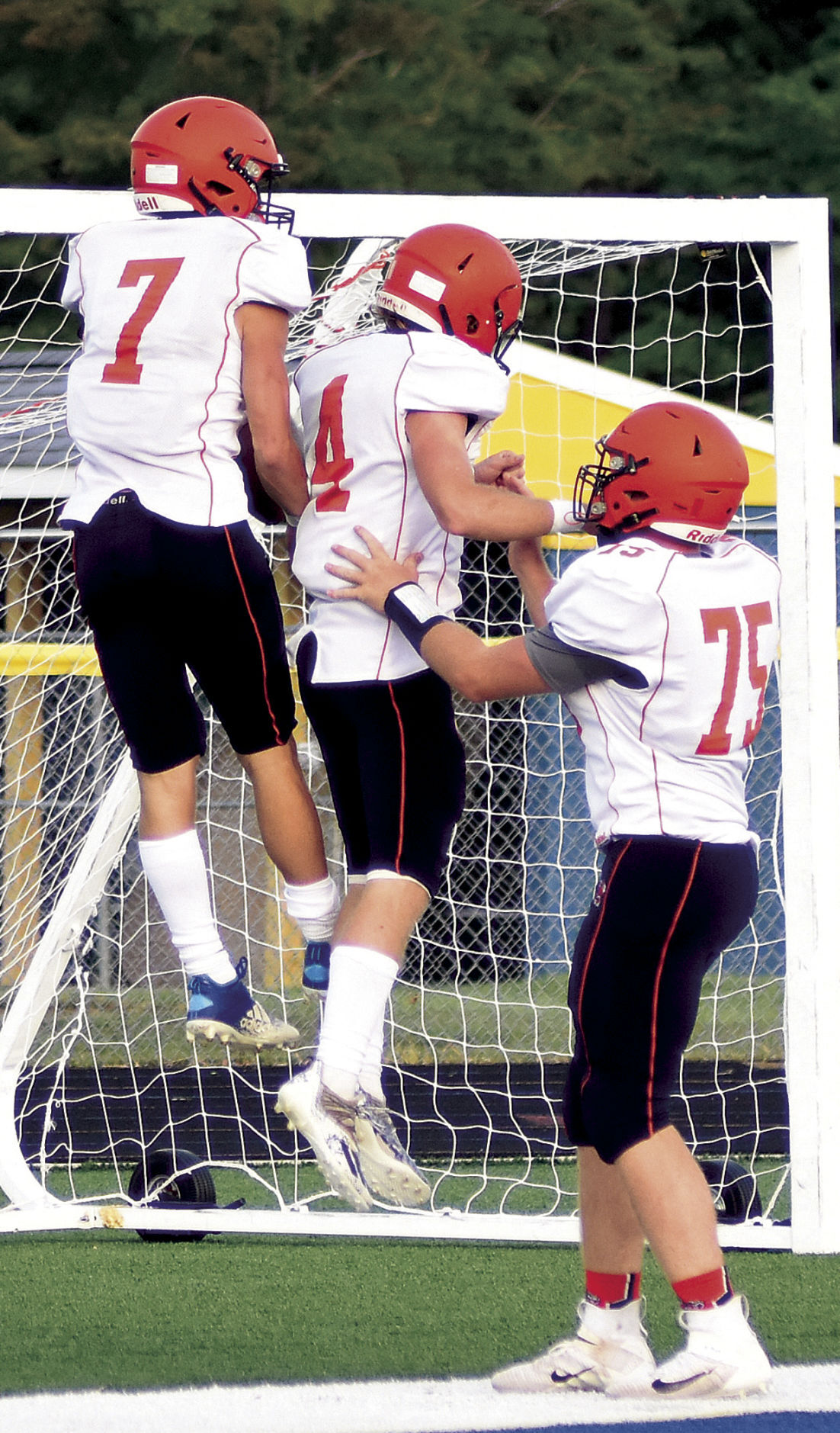 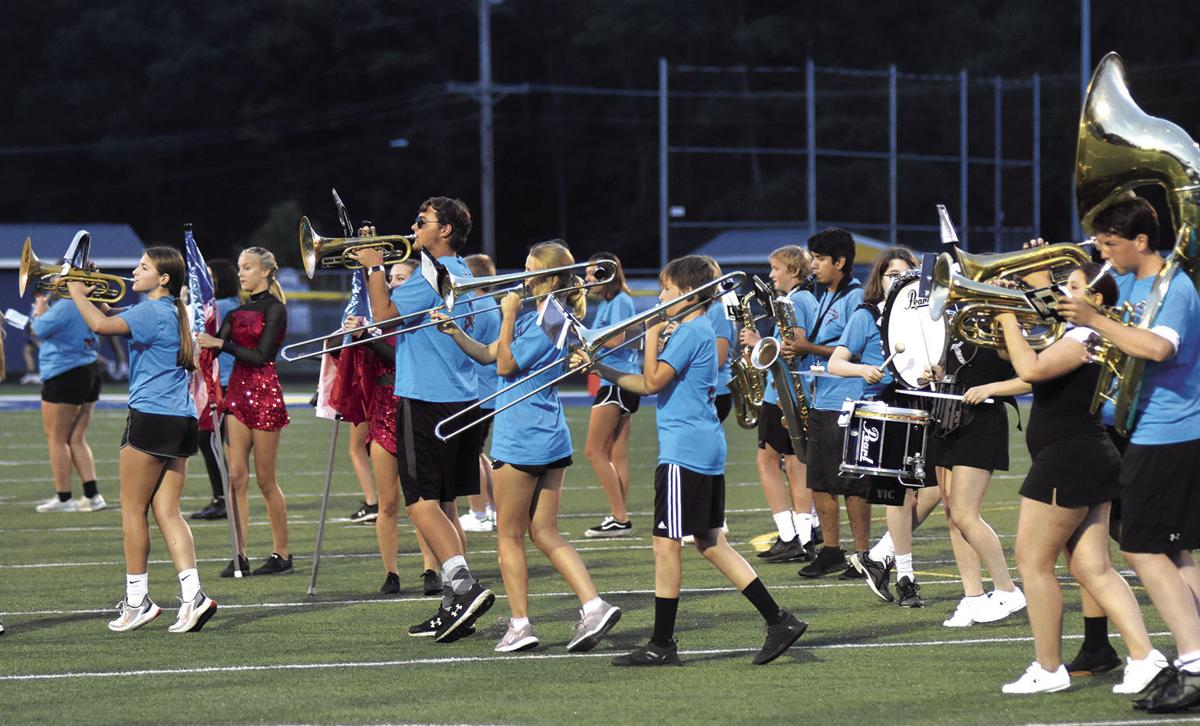 The New Buffalo High School Marching Band’s half-time show on Sept. 2 was temporarily interrupted by a “Joker” of a villain who disappeared as quickly as he had appeared.

Red Arrow Raiders cheerleaders make the trek to the Bridgnan side of the field on Sept. 2.

Eli Thomas of the Red Arrow Raiders (right) breaks away from the Bridgnan defense on Sept. 2.

The Raiders student section cheers on their team.

Member sof the Red Arrow Raiders line up ahead of the Sept. 2 kick-off.

NEW BUFFALO — The Red Arrow Raiders co-op team was welcomed to the world of eight-man football by Bridgman on Thursday, Sept. 2, and the Bees put on a clinic in all aspects of the game to go 2-0 on the season.

Visiting Bridgman (the game was played in New Buffalo) jumped out to a quick 16-0 lead and never looked back, building a 35-2 half-time advantage and eventually winning by a 55-14 score.

New Buffalo head coach Matt Johnson said the Raiders, (which includes players from New Buffalo and River Valley high schools) faced a tough opening-night opponent in an experienced Bridgman squad which already had a game under its belt while Red Arrow was idle on Sept. 2.

“They’re a good ball club … they’ve got three athletes that are hard to account for,” he said. “We showed our inexperience tonight, but the goal is to be better next week.”

Bridgman’s opening drive covered 70 yards, with quarterback Reid Haskins accounting for the final 36 yards via a sprint to the end zone with 10:14 left in the opening frame. A two-point conversion pass from Haskins to Jayce Warren upped the lead to 8-0.

On the ensuing kick-off Bridgman kicker Tanner Peters unleashed a short bouncer that was recovered by teammate Nolan Staniszewski at the Raider 47 yard line.

Haskins reeled off a 32-yard gain on the first play of the brief drive, and the junior QB connected with Warren on an 11-yard scoring strike three plays later. An extra-point boot by Peters left the margin 15-0 with 7:20 showing on the clock.

“People forget about the kicking game … and it can change the whole momentum,” Peters said.

Another Bridgman onside kick attempt was thwarted by Hunter Lynch of the Raiders, and two long gains by Eli Thomas helped the Red Arrow squad reach the Bridgman 20 yard line. But Warren came through with a highlight-reel defensive play on third-and-15 from the 25 when he reached Raider quarterback Michael Bombin, knocked the football away and scooped up the bounce in stride en-route to the end zone to put the Bees up 21-0 with 4:21 remaining in the opening quarter.

“I kind of just swatted it out of his hands and then I definitely got lucky on the bounce and just took it to the house,” Warren said.

Two plays after Lynch had sacked Haskins on a late first period Bridgman possession, the BHS signal-caller escaped for a 52-yard run to pay dirt (Peters’ kick left the tally 28-0 in the Bees’ favor with 1:01 to go in a long opening frame).

Bridgman scored again (to lead 35-0) at the 10:49 mark of the second quarter on a 55-yard rush by Nat Necas and an extra-point boot by Peters.

Ben Coffeen recovered a Bridgman fumble at the BHS 25 yard line with 6:03 to go in the first half, but the Bees thwarted a fourth-down play at their 19 to end the scoring threat. Three plays later Haskins was tackled in the end zone by Chris Israelite and Coffeen after chasing down a high snap and the Raiders got their first points with 3:09 remaining in the half.

The Raiders got their first-ever touchdown at the 3:37 point of the third period when Bombin rumbled 27 yards, breaking a Warren tackle on the way.

Haskins reached the end zone from seven yards out with just 22 seconds left in the third, with a kick by Peters making it a 40-8 ballgame.

He was at it again in the fourth quarter, racing in for a 46-yard touchdown with 4:36 showing on the game clock. Peters boot upped the lead to 55-8.

Thomas finished the scoring with a 75-yard end-run for six points with 2:53 to go in the game.

Bridgman head coach Aaron Locke said his defense kept it focused despite missing a couple of starters, adding that defensive tackles Wade Haskins and JaQuon Pierce did a good job of making plays.

Haskins ended up running for 260 yards and four touchdowns while passing for 82 yards and two more scores.

Bombin led the Raider defense with 12 total tackles while Lynch and David Fairchild had sacks.

Bridgman (a 60-8 winner against Fennville the previous week) is scheduled to play at Concord on Sept. 10.

The Red Arrow Raiders (1-1 due to an opening-week forfeit from Bangor) plays its first game at River Valley at 11 a.m. Saturday, Sept. 11, against Tri-Unity.