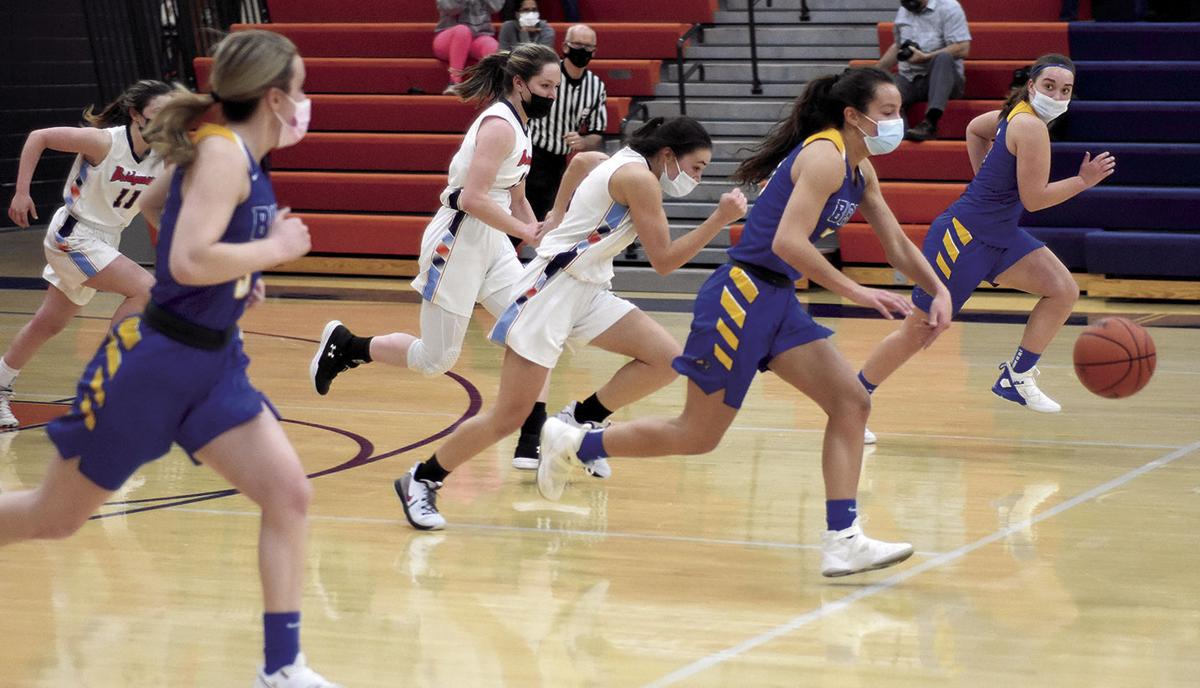 Sophia DeOliveira (with basketball) leads a fast break for New Buffalo during a March 13 game in Bridgman. 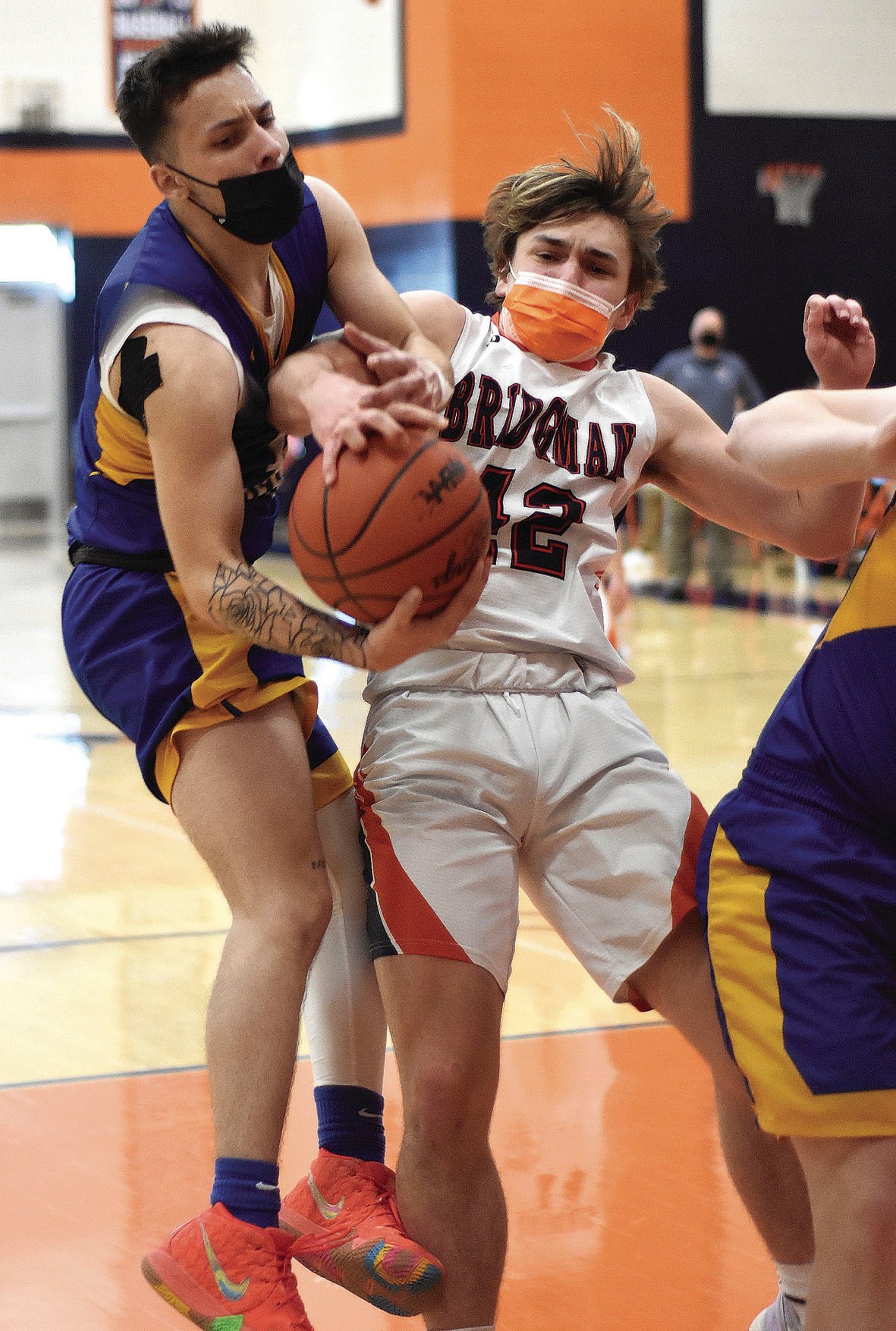 Kaden Parmley of New Buffalo (left) and Bridgman’s Tanner Peters battle for the basketball on March 13. 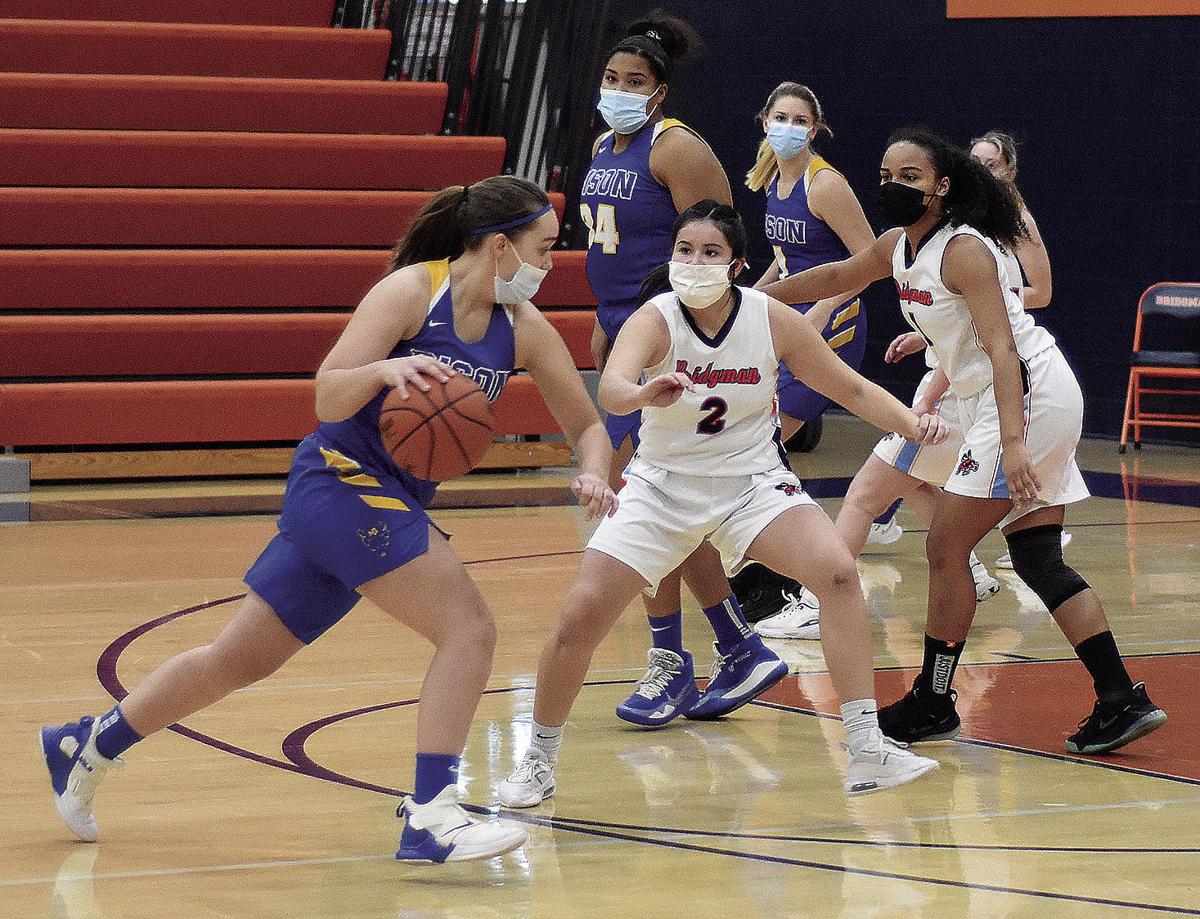 Aaron James of New Buffalo (from left) looks to drive past Bridgman defenders Yvonne Carranza and Olivia Tomlin on March 13. 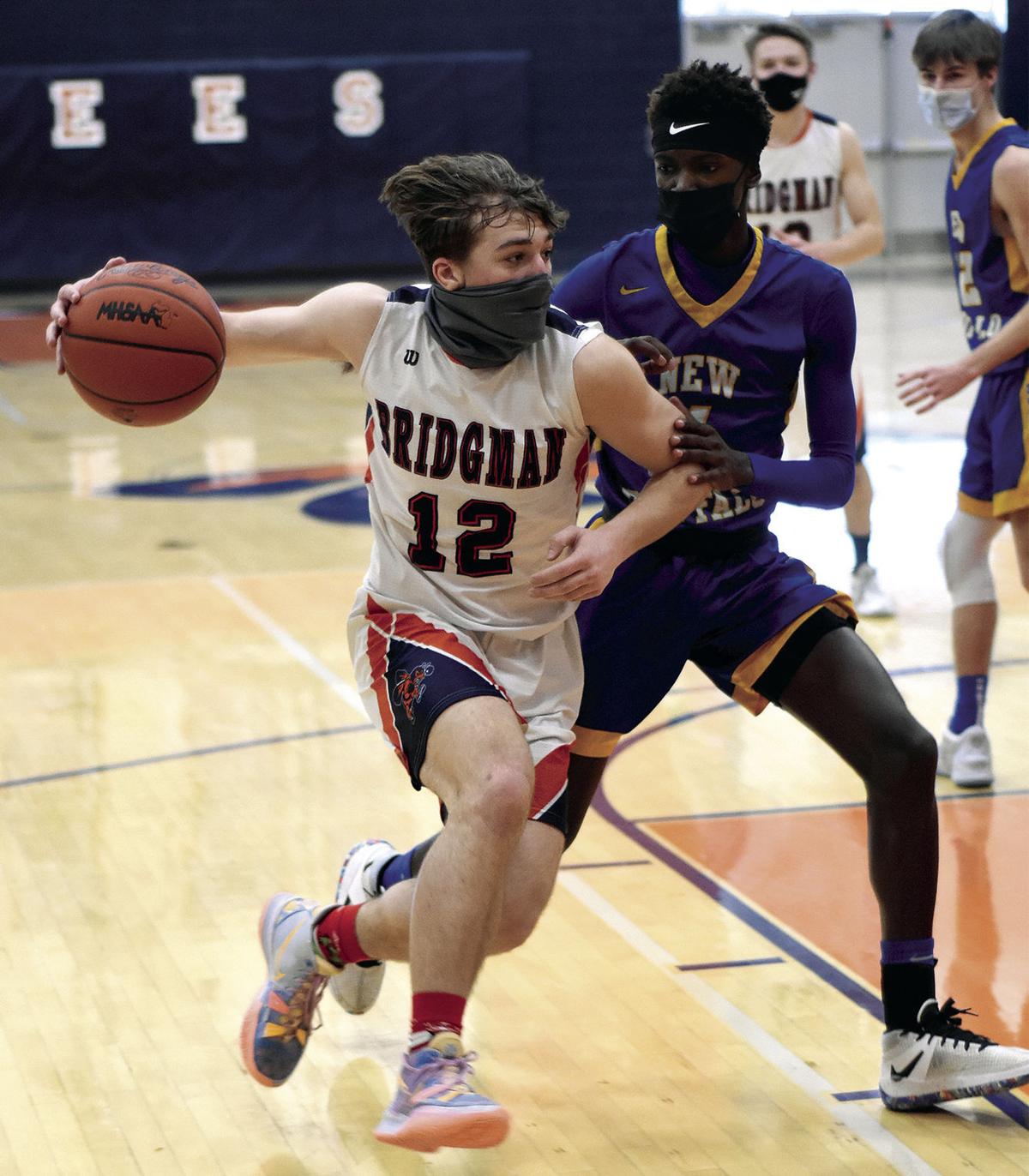 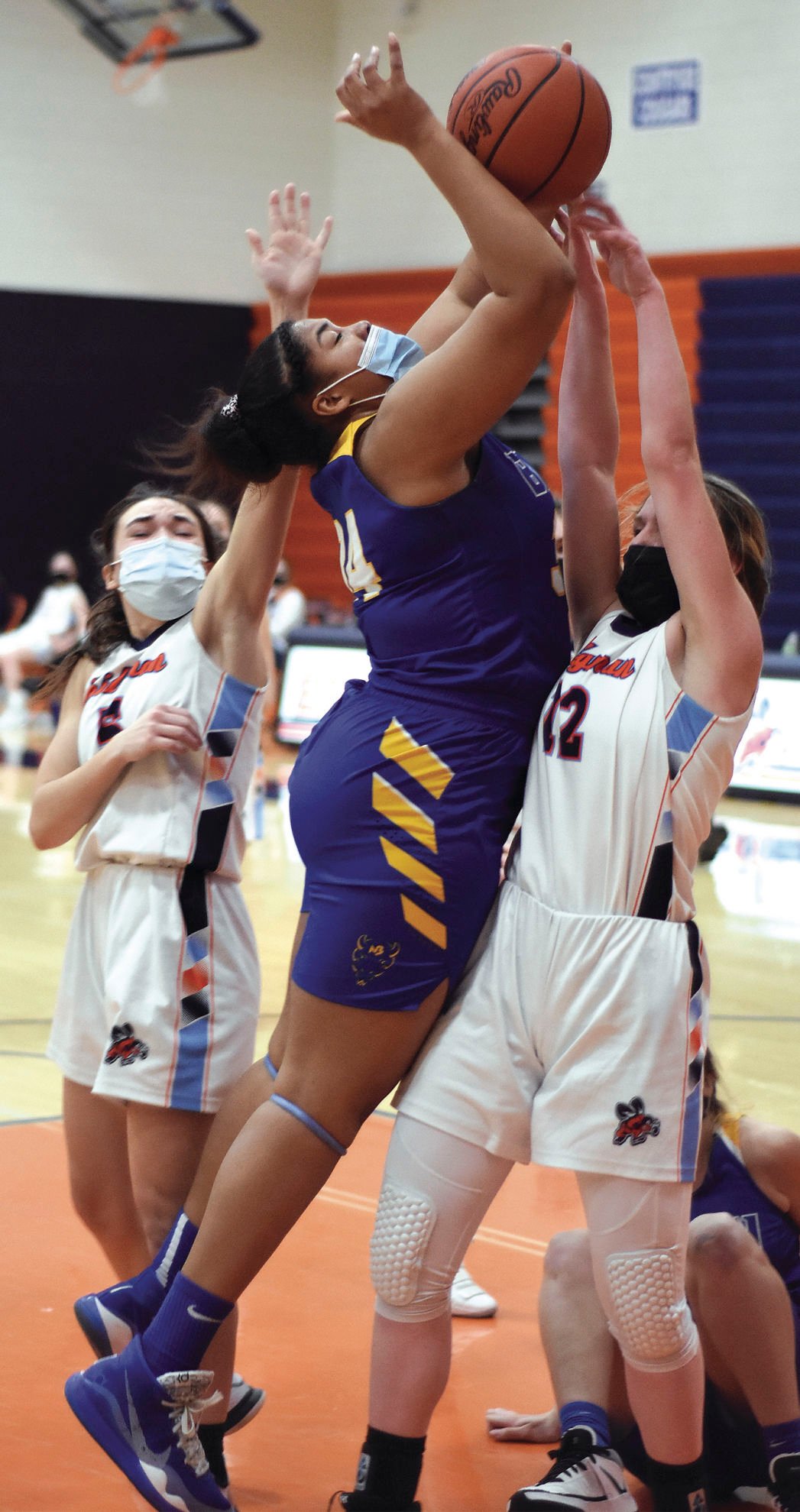 Nadia Collins (center) drives to the basket for New Buffalo. 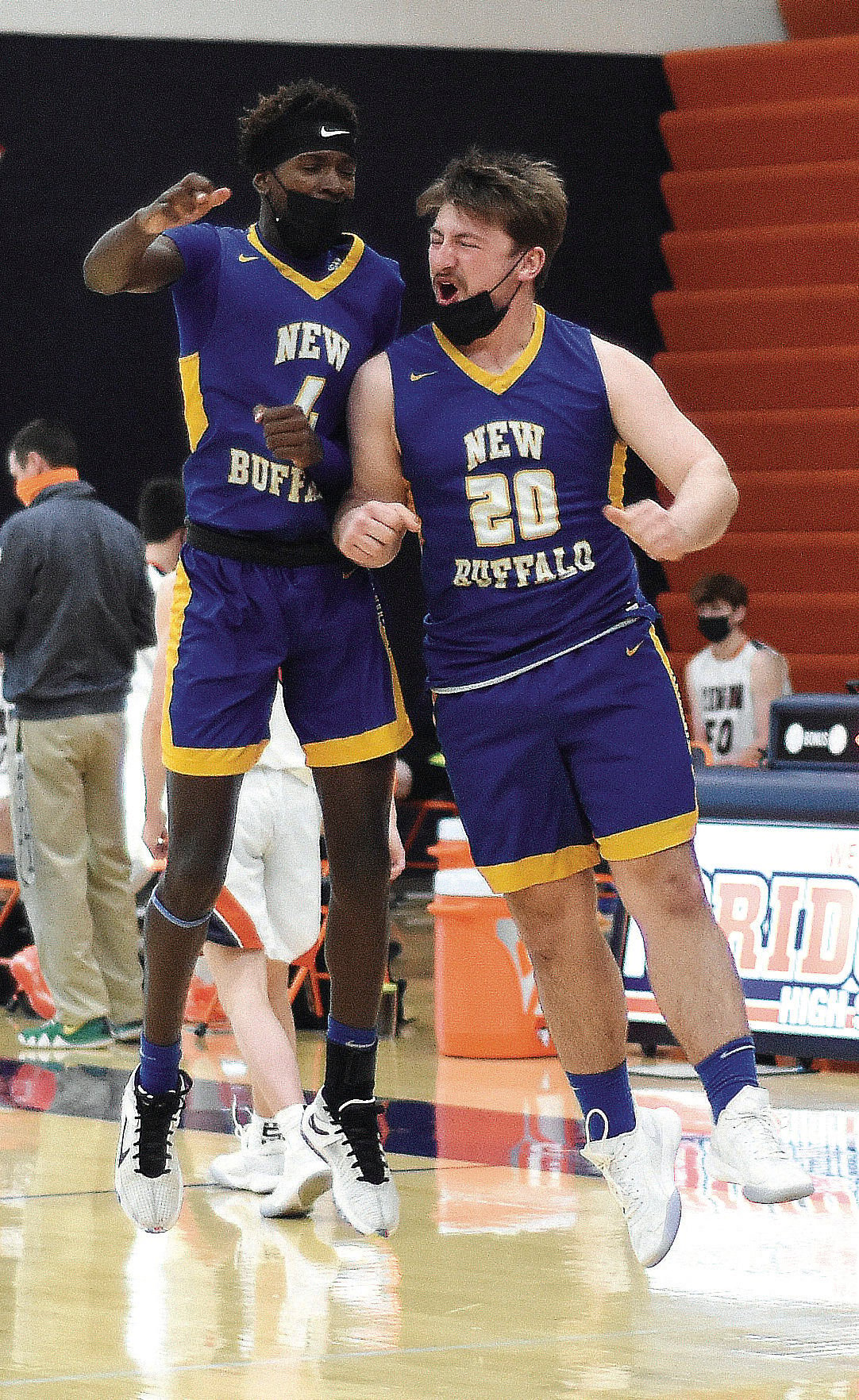 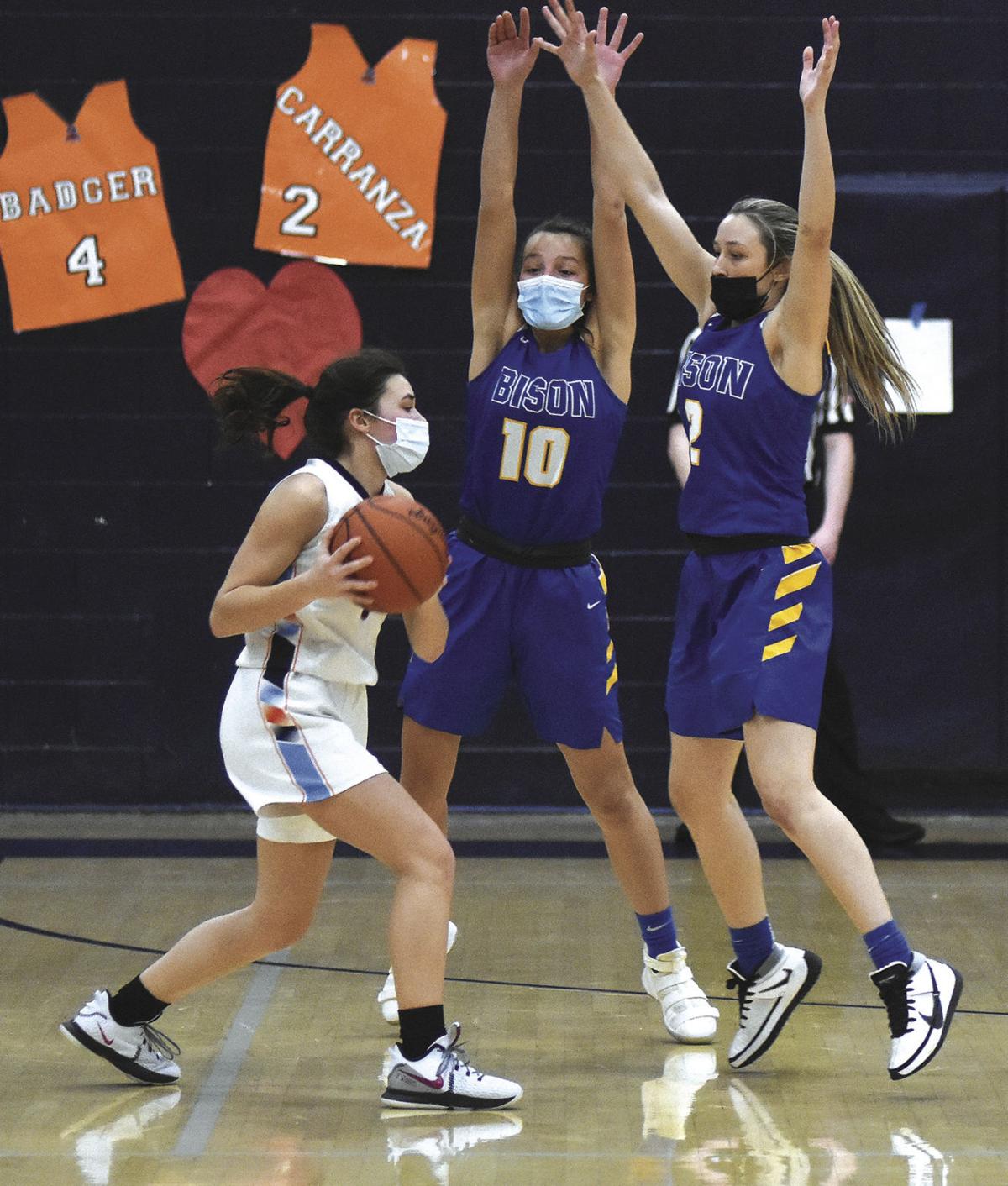 Bridgman’s Arie Hackett (from left) looks for an opening against New Buffalo defenders Sophia DeOliveira and Ava Mullen during the March 13 game. 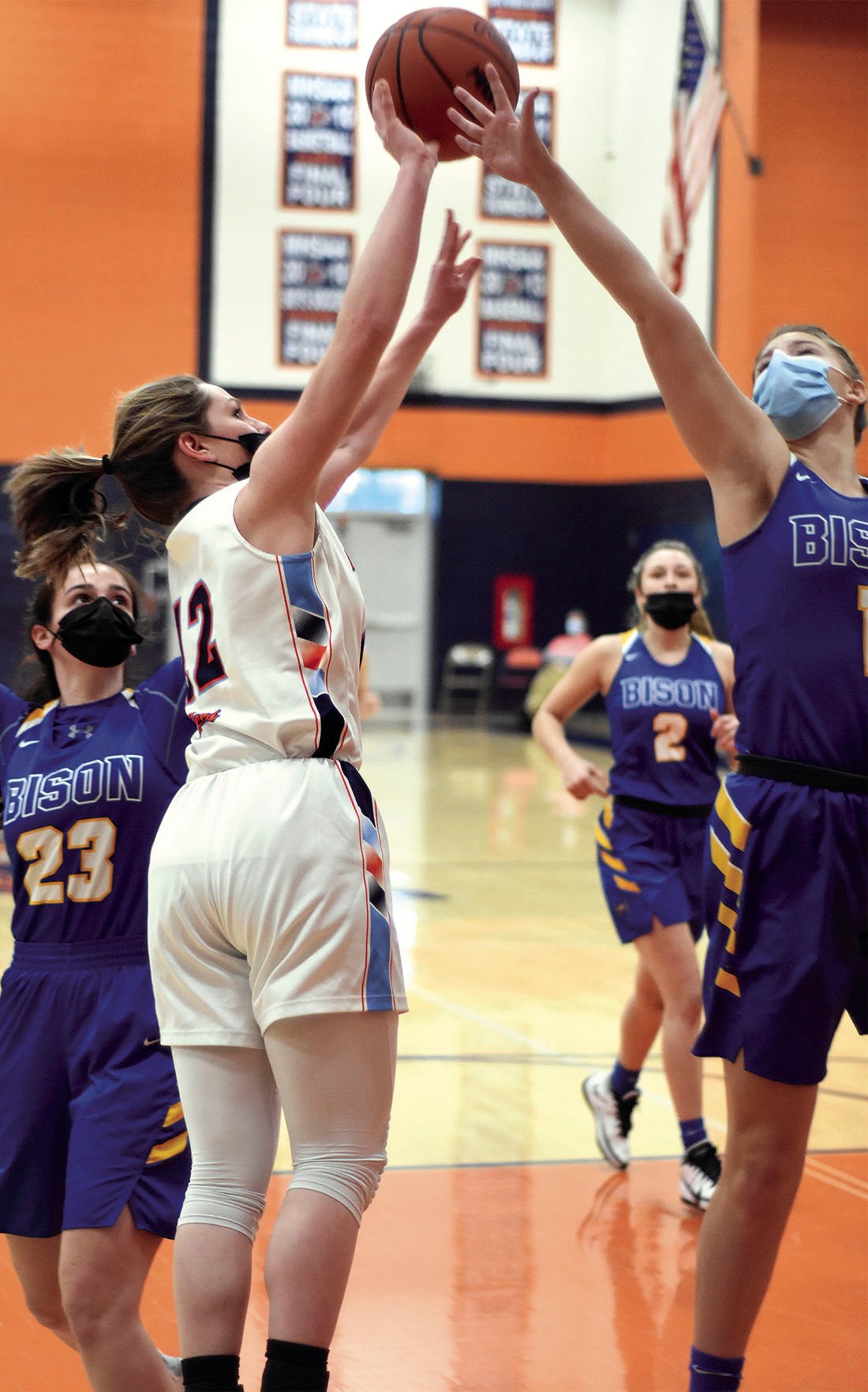 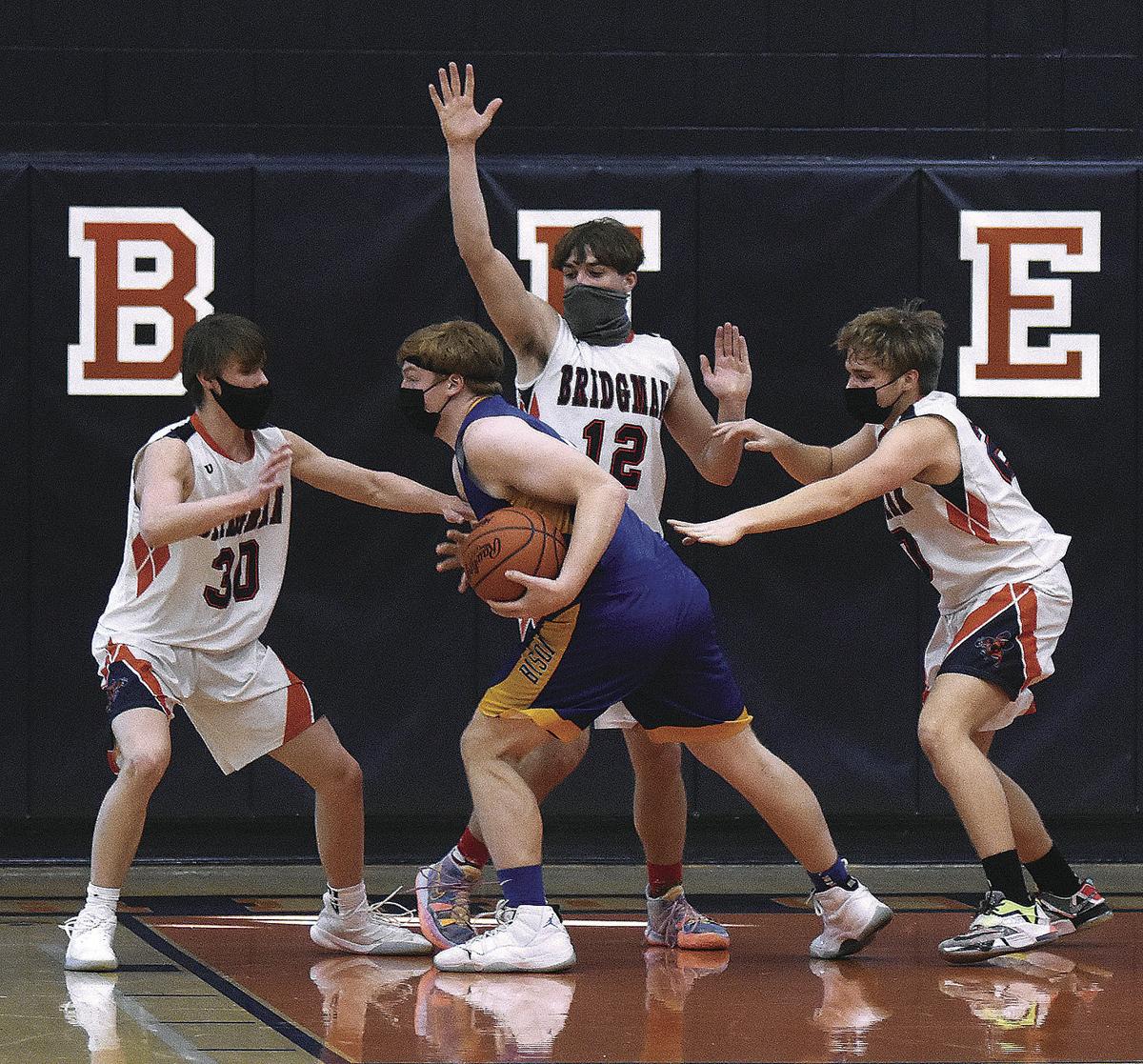 Sophia DeOliveira (with basketball) leads a fast break for New Buffalo during a March 13 game in Bridgman.

Kaden Parmley of New Buffalo (left) and Bridgman’s Tanner Peters battle for the basketball on March 13.

Aaron James of New Buffalo (from left) looks to drive past Bridgman defenders Yvonne Carranza and Olivia Tomlin on March 13.

Nadia Collins (center) drives to the basket for New Buffalo.

Bridgman’s Arie Hackett (from left) looks for an opening against New Buffalo defenders Sophia DeOliveira and Ava Mullen during the March 13 game.

The Bison boys avenged a Feb., 27 loss to the Bees in their home gym by holding off a second-half rally to prevail 55-47

The Lady Bison broke loose from a low-scoring first half (the score was knotted at 7-all after one quarter of play) to win 38-12.

The boys contest was knotted at 8-8 in the first period before New Buffalo went on an 11-2 run fueled by a pair of Anthony Lijewski three-point baskets and a Jaden Parmley “3.”

Bridgman’s Jayce Warren ended the opening stanza with a three-pointer to pull the host Bees within six points (19-13), but the Bison answered loudly by reeling off 12 unanswered points in the second period to build a commanding 31-13 lead. Mark Shaw got things rolling with consecutive offensive rebounds and put-backs. Jeremiah Mitchell poured in the game’s next eight points on a drive to the basket and a pair of three-pointers.

Bridgman made a late 5-0 run thanks to a Warren “3” and a John Sanderson hoop, but New Buffalo’s half-time advantage stood at 31-18.

With his team trailing 35-20 in the third quarter, Warren powered a Bridgman rally with 11 points to help cut the margin all the way down to two (37-35) late in the period.

But the Bison would not give up the lead.

A three-point shot by Lijewski and Mitchell’s regulation score sent New Buffalo into the fourth quarter on top 42-35, and they would go on to get clutch buckets from Parmley, Lijewski and Ryan Vinson to carry a 49-44 advantage into the final three minutes of play.

From there successful trips to the foul line by Mitchell and Shaw were enough as the Bees were held to a late “3” from Warren (he finished with a game-high 27 points).

Parmley said mistakes in the second half nearly cost New Buffalo the lead, but they hung on.

“It was good to finally beat Bridgman,” he said, adding that he hadn’t been victorious agains the Bees since sixth grade.

“It was a great team win,” noted Shaw.

New Buffalo’s balanced attack included 13 points from both Parmley and Mitchell, 11 points by Lijewski, a 10-point tally by Shaw and 8 points for Vinson.

“They made it interesting for sure,” he added.

Tripp said it was nice to see his team handle pressure situations in a game they really wanted.

“That’s a good tune-up game getting ready for districts.”

The Bison are slated to face the winner of a March 23 first-round contest between Lake Michigan Catholic and Michigan Lutheran in a 5:30 p.m. March 25 district semifinal game at River Valley. The second semifinal pits the host Mustangs against Countryside Academy. The final is set for 1 p.m. March 27.

In the March 13 girls game the host Bees held an early 5-2 had thanks to scores by Olivia Tomlin and Samantha Rydwelski.

The Bison pulled even at 7-7 as Nadia Collins hit a field goal and Sophia DeOliveira sank two free throws.

New Buffalo slowly pulled away in the second stanza, out-scoring Bridgman 9-0 as DeOliveria tallied six points and Aaron James scored off a pass from Collins.

The Bison owned the third quarter by a 14-1 margin to carry a commanding 30-8 lead into the final period. Collins, DeOliveira, Ava Mullen and Abby Vitale all sank shots in the third.

DeOliveira (who finished with a game-high 14 points) said the Bison played good defense the whole game while gaining confidence in their shots as it went on.

Rydwelski tallied 7 points for the Bees.

Bridgman was coming off a 34-30 victory at Parchment on March 11. Rydwelski scored 14 while Arie Hackett added 8 points.

The Bison are scheduled to host River Valley in a March 24 district semifinal game. The winner advances to the district final scheduled for 7:30 p.m. March 26. The other side of the bracket has LMC and Eau Claire playing on March 22 with the victor taking on Michigan Lutheran on March 24.